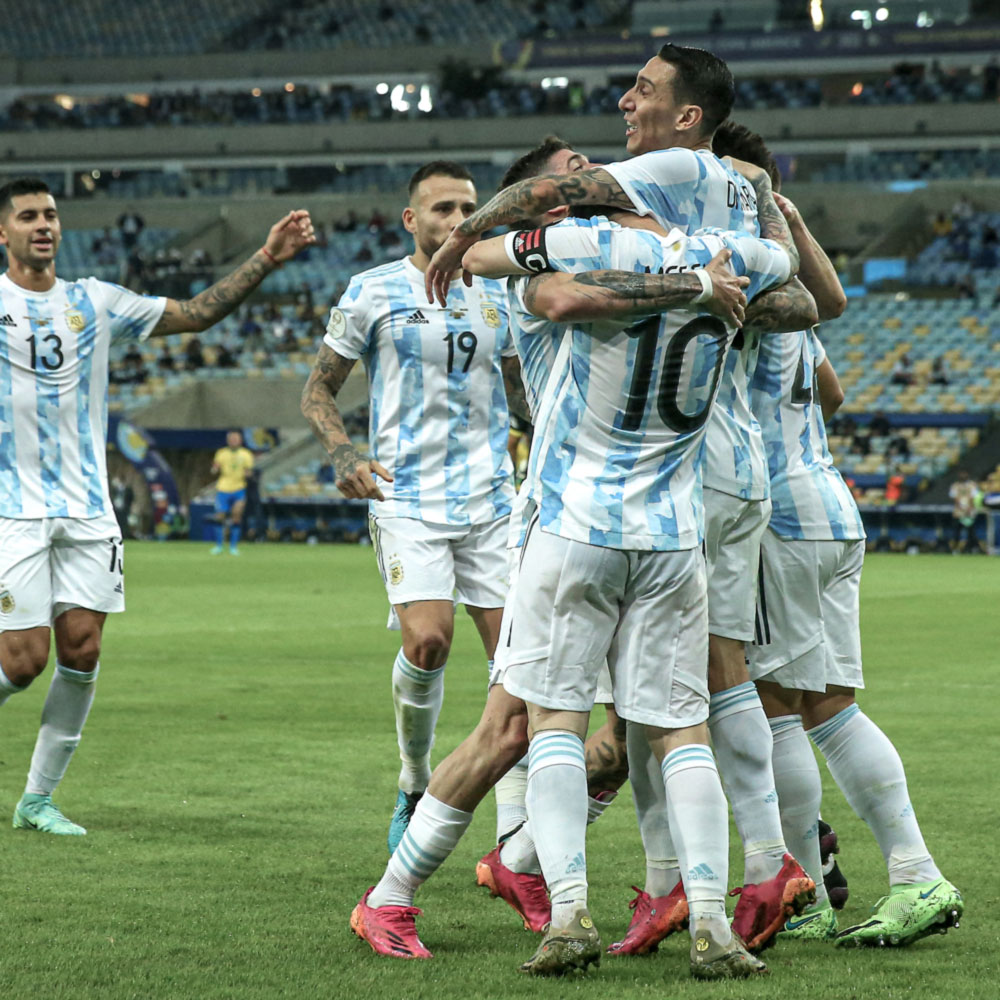 Argentina won their first Copa América title since 1993 with a narrow victory over  Brazil in their great rivals' beloved Maracana stadium in Rio de Janeiro. La Albiceleste had been beaten in four finals, three of those in penalty shootouts, since their last victory in South America's major international tournament. Their 28-year wait ended in a win secured with an ice-cool lob from Paris Saint-Germain attacker Ángel Di María midway through the first half. Brazil disappointed in their efforts to hit back, with Aston Villa goalkeeper Emi Martínez having to face less than a handful of shots on target – the best from Everton forward Richarlison – in the 90 minutes. Victory gave captain Lionel Messi his first major international title with Argentina at the age of 34. "In the end, he did not throw in the towel and he succeeded," said head coach Lionel Scaloni. "We are talking about the best footballer of all time, and everyone knew how important it was for him to win a title with the national team."

Head coach Lionel Scaloni set Argentina up in a 4-4-2 formation, with Ángel Di María and Giovani Lo Celso operating as wide midfielders and captain Lionel Messi alongside Lautaro Martínez in the front two. One key pattern involved left-back Marcos Acuña pushing further forward in possession, which left Argentina with more of a back three but allowed Lo Celso to narrow into central midfield from his starting position on the left. Di María would hold his wider position on the right flank; this allowed Messi to drop into the right inside channel, while Martínez operated as a more traditional centre-forward in occupying Brazil’s centre-backs.

Lo Celso’s narrowing into more of a three-man central midfield alongside Leandro Paredes and Rodrigo De Paul also gave Argentina cover when they lost the ball inside Brazil’s half. Lo Celso and Rodrigo covered the spaces inside Di Maria and Acuña, leaving Paredes to focus on blocking central access into Brazil’s forwards. This second line of three did well in limiting Brazil’s breaks after they began to use a much deeper block to defend against Argentina’s front line.

Brazil converted into a 4-4-2 shape when defending, with Neymar staying high to join Richarlison on the top line and Everton sitting deeper in the midfield line, so Argentina’s forward progress when building from deep naturally came in the wider spaces. Whenever Brazil set up in a mid-block, Argentina’s adapted back three progressed around the outside of their forwards, with Nicolás Otamendi often stepping into midfield with the ball to initiate left-sided rotations.

Despite building well at times, it was from a direct ball over Brazil’s back line that Argentina scored the goal that would ultimately prove decisive. Rodrigo’s pass found Di María’s well-timed run from the right, and the midfielder superbly lobbed the ball over Ederson in the Brazil goal. Argentina then adapted their attack so Messi could drop deeper and contribute more to the build-up, especially in central midfield. Di María then moved higher and inside, almost as a second centre-forward. Right-back Gonzalo Montiel could then push forward for the first time in the game; the central midfielders were able to cover for the full-backs on both sides, especially with Messi dropping to maintain numbers in central midfield.

After Brazil modified their attacking shape in the second half, Argentina faced lengthier spells of defending. Their mid-block deepened, and they were forced to employ the counter-attack as their main attacking strategy. Messi’s slightly wider positioning within the front pairing gave them an obvious and instant route out; from there, his dribbling helped him evade the counter-press and find teammates as Argentina attempted to build lengthier spells of possession. Brazil’s more intense pressing of the Argentina full-backs and midfielders largely stopped them from regaining attacking momentum and limited their forward progress, however.

The introduction of Nicolás Tagliafico at left-back enabled Acuña to move forward and established a stronger defensive set-up against Brazil’s increasing threat from the right, while maintaining the same attacking structure. Messi continued to drop centrally, with Acuña moving inside to support Martínez and Di María. The central-midfield pairing, with Guido Rodríguez on for Paredes to join Rodrigo, formed a double pivot to protect against any Brazil counter-attacks.

As the second half continued, Argentina focused on defending inside their own half and endured long spells without the ball, using occasional counter-attacks to help relieve pressure more than in any serious efforts to grab a second goal. Their structure and organisation without the ball held firm, however, as they saw the game out to secure an emotional victory.

Head coach Tite set his Brazil team up in a 4-3-3 formation with the ball, with Neymar, Everton and Richarlison as the front three. Fred and Lucas Paquetá started as the advanced central midfielders, in front of single pivot Casemiro.

The defending champions’ early attacks saw Fred drop alongside Casemiro, however, and then shift left. This pushed left-back Renan Lodi forward, which in turn helped Neymar drift inside to receive and combine closer to Richarlison. To combat this, Argentina’s right-sided midfielder Ángel Di María was required to track the runs along the Brazil left, with right-back Gonzalo Montiel aggressively pushing forward towards Neymar’s new position.

The Brazil build-up too often lacked pace, however, and the strength of Argentina’s counter-attacking set-up made them even more wary. Casemiro and Fred dropped deeper in the build-up, which offered greater protection if Brazil lost possession but contributed to the slow tempo that allowed Argentina to sit in a compact and comfortable mid-block.

Brazil tended to focus on the wide areas, working the ball around Argentina’s two forwards and away from the congested central-midfield spaces. They failed to create any real chances of note, however, either through one-on-one supremacies or combining in tight spaces in and around the Argentina full-backs. When they were able to deliver balls in from wide, Richarlison represented Brazil’s only real aerial threat against an Argentina back line that looked comfortable defending in their own box.

A goal down at half-time, Brazil introduced Roberto Firmino to replace Fred. The Liverpool forward operated as the central striker, with the supporting width now maintained by Richarlison and Everton. Casemiro remained as the single pivot, while Paquetá’s forward runs through the right inside channel allowed Neymar the space to move inside and operate close to Firmino.

The change initiated more of the wide combinations missing from their play in the first half. Neymar’s influence grew in his ability to disrupt Argentina’s central-midfield pairing, and his forward passing from his revised inside-left position worked to create more chances for the front line.

With the equaliser not forthcoming, however, Tite threw a number of players forward against Argentina’s deepening block. Both full-backs moved forward and the wide midfielders narrowed alongside Neymar and Firmino, with this further support enabling Brazil to pile late pressure on the Argentina goal. They ultimately failed to break through the compact low block, however, and fell to a 1-0 defeat to their greatest rivals in their own back yard.