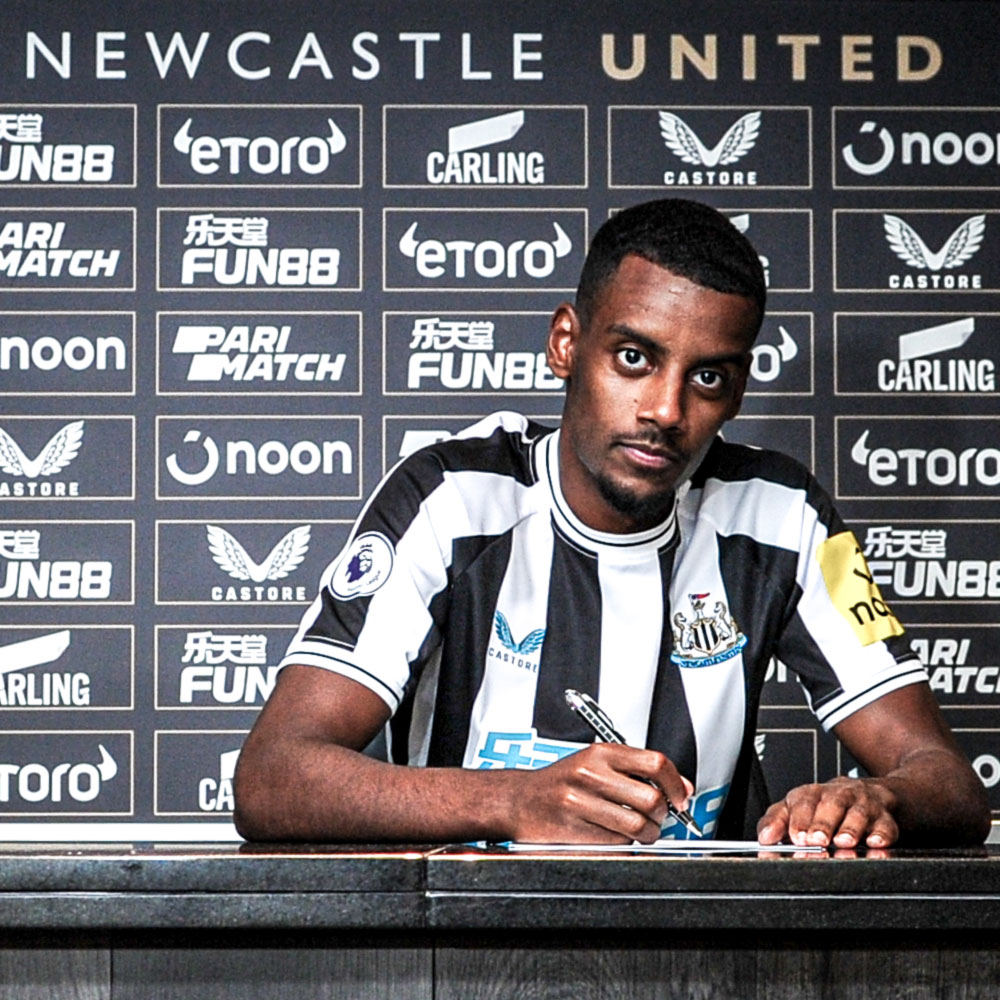 Newcastle United smashed their transfer record in signing Alexander Isak from Real Sociedad, for a reported deal worth up to £63m, in August 2022. Isak was still only 22 when putting pen to paper on a long-term deal with the Magpies, but adds welcome firepower to a forward line that had previously relied on Callum Wilson and relatively recent arrival Chris Wood for goals.

The Sweden international has long been tipped as a Premier League player, his early potential convincing Borussia Dortmund to pay Swedish club AIK a reported £8m for a then 17-year-old in January 2017. Isak made only limited appearances at the German club before joining Real Sociedad in the summer of 2019. A record of 33 goals in 105 La Liga appearances doesn’t scream prolific, but a run of 10 goals in nine league games during the 2020/21 season will give hope to Newcastle fans, as manager Eddie Howe looks to build a squad capable of challenging in the top half of the Premier League table.

“Pace, technical ability, dribbling ability; he has got a bit of X-factor about him,” said Howe of his new signing. “He is slightly different, and I think he is capable of scoring goals.”

Isak is a right footed centre-forward who can lead the front line on his own or work in a centre-forward pairing. He shows versatility in his movements; when space allows, he can spin in behind, running forward to attack beyond his centre-back markers. In this way, he is similar to players such as Jamie Vardy and Romelu Lukaku, who make two movements as part of one forward run in behind. The first manipulates the marker, while the second finds a suitable space in which to receive or from which to shoot.

Isak also spins in behind after initially dropping short to connect into the midfield with quick bounce passes. When dropping to link with the midfield, or indeed advancing defenders, Isak will curve his movements towards the ball, and then continue his run to ultimately face forward and exploit any spaces beyond (below). This is especially effective if his marker has followed the initial dropping movement, giving Isak more space to exploit. For the most part, Isak will do this towards the left, leaving him able to then finish on his stronger right side across goal. If play then builds on the right, Isak can provide a secondary movement to attack the far post, or reposition centrally as he reaches the penalty area.

In and around the box, Isak has also shown versatility in his goalscoring. Another benefit from his forward runs in behind is that he can use the momentum of the pass to create different finishes on goal. He can cut inside and shoot across goal powerfully, while maintaining accuracy to bend the ball inside the far post. Equally, he is calm when 1v1 with the goalkeeper. When beyond the last line, both centrally and from an angle, he likes a disguised, deft finish lofted over the goalkeeper (below).

Isak as a ball-carrier

When Isak doesn’t offer penetrative threats, his play between the lines is mostly linked to threatening through dribbles or carrying the ball forward. Here, his best work is done when drawing defenders out of the back line through his dribbling technique, before releasing the ball away from pressure (below). As one defender jumps to Isak, the rest naturally narrow to cover the space within the back line. When Isak recognises when his attacking actions create space to exploit elsewhere in the opposing back line, his final-third play improves significantly.

In the 2021/22 season, Isak ranked 15th in La Liga for dribbles. He can enhance counter-attacks from deeper regains through his ability to carry the ball over longer distances. When facing more opponents and a stronger defensive block ahead of him, however, his control can suffer – and when multiple changes of direction are required in a short space, he finds it harder to use his body to manipulate the defender through feints and shoulder drops. He offers a much stronger threat when he needs only to push the ball past an opponent in one direction and accelerate.

Isak as a single centre-forward

Isak has spent all of his career as a centre-forward, and with Real Sociedad this was mostly as a lone striker. In 2019/20 and 2020/21, Isak led the line within Sociedad’s most common 4-2-3-1 and 4-3-3 structures. In the second of those seasons, he returned 17 goals in 34 La Liga appearances as the main focal point of the attack. Full-back Nacho Monreal would push forward on the left flank, with winger Mikel Oyarzabal narrowing inside, sometimes even as a number 10 (below).

Left-sided number eight Mikel Merino would also push forward on occasion, giving Sociedad a very fluid left side. This meant there were fewer opportunities for Isak to drift and receive towards the left compared with the subsequent (and much less prolific) 2021/22 campaign. In his best goalscoring season for the club, therefore, he played as more of a penetrative centre-forward, from where he was usually Sociedad’s highest attacking player and could stretch in behind opposing back lines and threaten for longer inside the penalty area.

Isak in a front two

In the 2021/22 season, Sociedad employed two strikers through both the flat and diamond 4-4-2 shapes. Here, there was more room for Isak to drift wider and attack from the left side – but he inevitably offered less of a central goal threat and scored only six goals in 32 league appearances. The use of a 4-2-3-1 with a number 10 also allowed Isak to drift left, where his dribbles focused on diagonal cutting across the penalty area and attempts on goal from the angle, where he demonstrated his powerful and accurate finishing across goal (below).

When used as part of a front pair, Isak usually played alongside the on-loan Alexander Sørloth. The veteran David Silva was the main final-third creator, breaking lines, creating chances and penetrating blocks with deft left-foot passes. Merino and Rafinha – the latter on loan from Paris Saint-Germain – would join attacks from midfield, and look to penetrate into the penalty area around Sörloth. Full-backs Andoni Gorosabel and Diego Rico then provided the attacking width.

Whether his new manager looks to use Isak alongside a strike partner – most obviously Wilson – or as a single focal point in attack will become clear over time. But Isak certainly has enough about quality to make an impact at his new club.