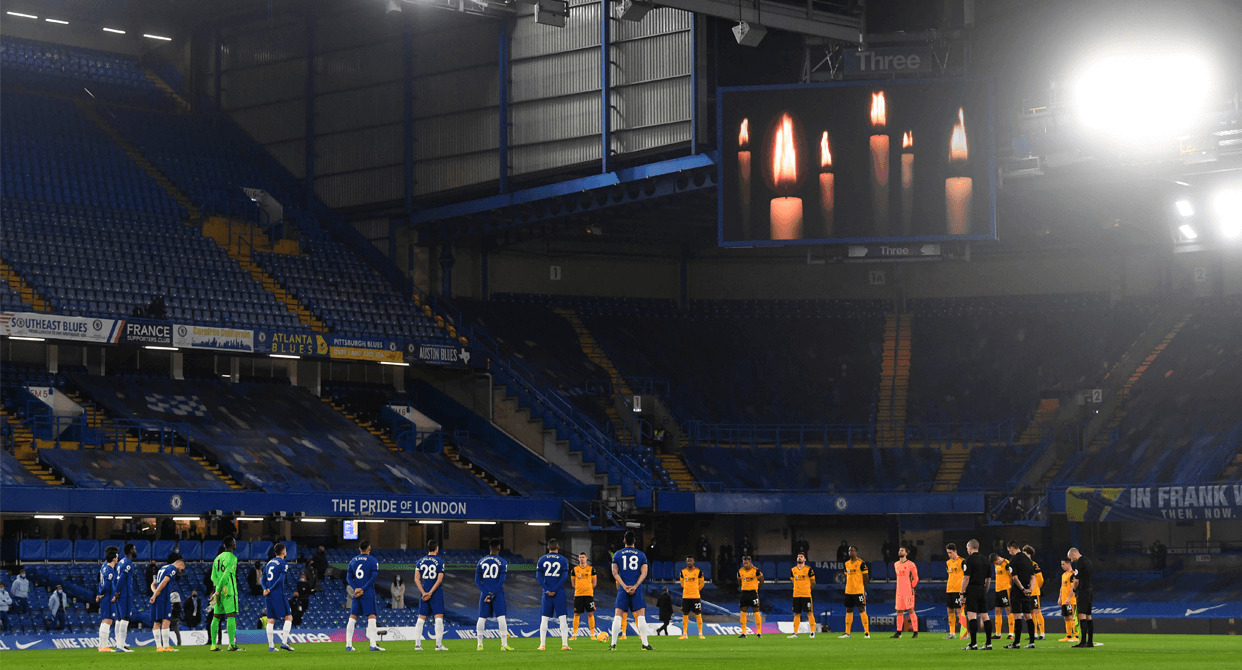 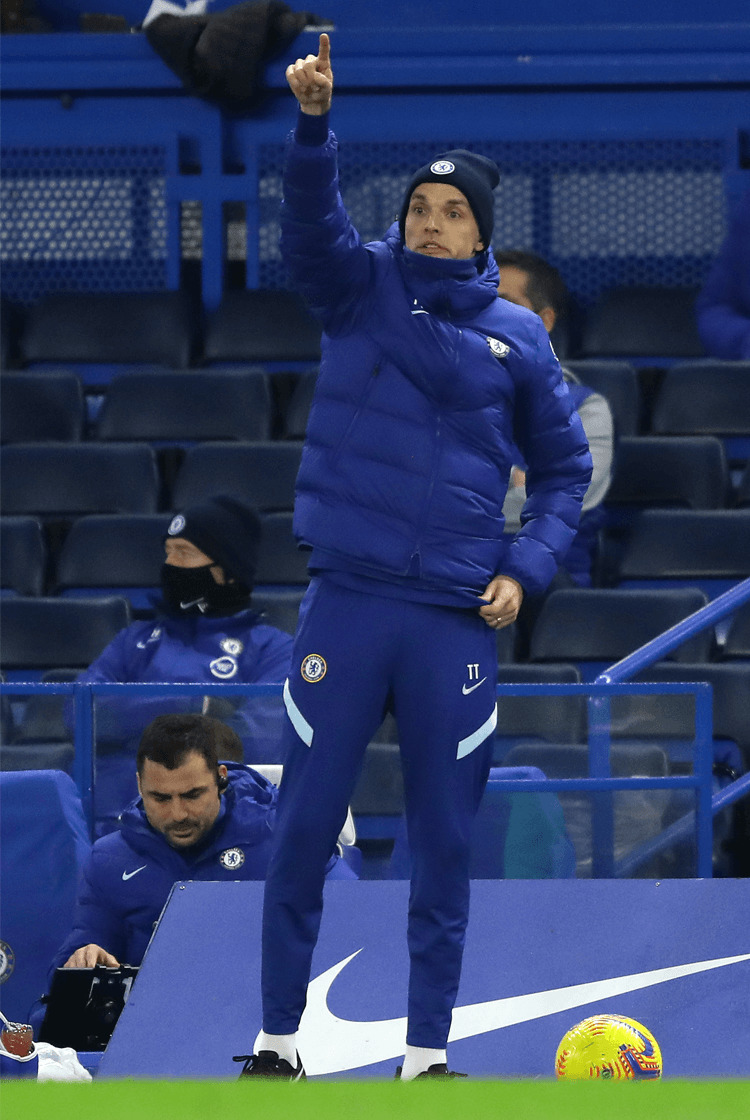 Chelsea were held to a goalless draw at Stamford Bridge in Thomas Tuchel's first match as the successor to Frank Lampard. The German's appointment had been confirmed on Tuesday, following Lampard's dismissal on Monday, meaning he oversaw only one training session with his new players before the occasion of their first match. Rui Patrício produced saves to deny both Antonio Rüdiger and Callum Hudson-Odoi, but Chelsea otherwise largely offered too little attacking threat against opponents who defended well. "We will build a team that nobody wants to play against," Tuchel said. "I'm used to creating the special energy and atmosphere you need to create the possibility to win every three days in a league like this. I don't see too many weaknesses. I will focus on our strengths; the mix is amazing of the team between experienced players, big personalities and young, hungry talent. I was very happy performance-wise, unfortunately we couldn't score, if we take care of our performance like this the results will come." His opposite number, Nuno Espírito Santo, said: "We had a game plan, we stuck to it and we came out of it with a good point." 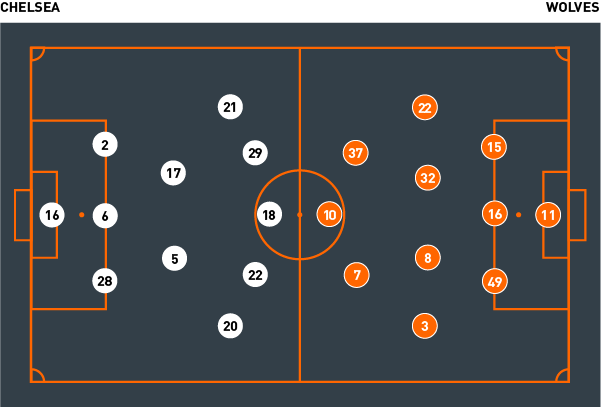 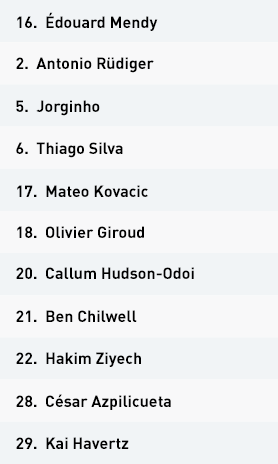 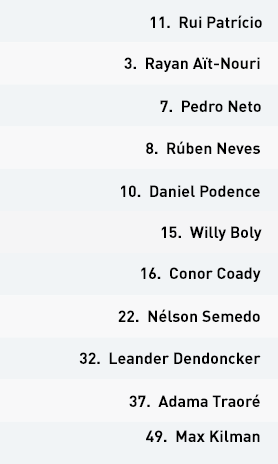 On the occasion of his first match as a manager in English football, Thomas Tuchel organised Chelsea into a 3-2-5 formation. Mateo Kovacic and Jorginho featured in central midfield, but were often joined on the same line by Callum Hudson-Odoi and Ben Chilwell if they withdrew into a deeper position. Wolves defended with a 5-2-3.

The visitors were largely passive, because they were attempting to limit the spaces Chelsea sought by defending only in their defensive half. When Chelsea were in possession Kovacic and Jorginho adopted narrow positions to offer improved defensive security and to draw Adama Traoré and Pedro Neto infield, giving César Azpilicueta and Antonio Rüdiger improved access to the half-spaces in front of them and, with Hudson-Odoi and Chilwell often further forwards, encouraging them to advance with the ball.


When either moved into the half-spaces, Wolves' wing-backs were drawn towards them, creating the increased space Chelsea wanted to exploit via the relationship between the relevant attacking midfielder and wing-back. Between them they combined effectively, usually via a wall pass into the space in behind, followed by the delivery of a cross into the penalty area – if low, those crosses posed a threat, but those with height were comfortably defended against by Wolves' defence and their goalkeeper Rui Patrício. When one of Chelsea's wider central defenders advanced far enough to eliminate Neto or Traoré there existed the potential to create a three-on-two in those same wide areas, but they were reluctant to repeatedly do so, owing to Wolves' potential on the counter.

Wolves later adopted a flatter 5-4-1 that gave them increased cover of the width of the pitch and made them more capable of screening Chelsea's attacking midfielders, and as a consequence Chelsea offered reduced movement and a limited threat between the lines and in behind. Mason Mount and Christian Pulisic, introduced as substitutes, increased their creativity; they sought to operate towards the right, and were more effective in limited spaces than had been Ziyech and Chilwell.

A further substitute, Tammy Abraham, offered more of a threat in behind than Olivier Giroud, who he replaced, but he played too few minutes. Wolves continued to impressively defend the spaces in behind; their organisation ensured the clean sheet they earned as much of a lack of creativity from Chelsea, who showed promise in the defensive and midfield thirds but needed to improve further forwards.

Wolves manager Nuno Espírito Santo set his team up into a 3-4-3 formation in which Leander Dendoncker and Rúben Neves featured in central midfield, between Nélson Semedo and Rayan Aït-Nouri. Chelsea defended with a 5-2-3, via Ben Chilwell and Callum Hudson-Odoi withdrawing into their defensive line, but similarly to their in-possession approach, their shape also often became a 3-4-2-1.

The visitors regularly sought to play directly from Rui Patrício, but they often struggled to control the first and second ball – the second, largely because of a lack of support around the first. When they instead played short, Chelsea attempted to apply an aggressive high press intended to limit their space and to force errors.

Kai Havertz and Hakim Ziyech initially pressed Willy Boly and Max Kilman, Wolves' wider central defenders. Chelsea's ballside central midfielder took his direct opponent, and then Havertz or Ziyech withdrew to prioritise the other central midfielder to free up whichever of Jorginho or Mateo Kovacic remained unoccupied to instead protect the defensive line behind them. When the ballside wing-back pressed his direct opponent, the furthest wing-back moved to join that defensive line; César Azpilicueta and Antonio Rüdiger prioritised Pedro Neto and Adama Traoré, and moved with them if they sought to contribute in midfield.


Applying that press forced Wolves into the wide areas of the pitch, where Chelsea's intensity would increase in an attempt to force longer passes and mistakes. Wolves struggled to create established periods of possession, and therefore increasingly had to rely on moments of transition to generate goalscoring chances; when they did so, the dribbling and one-on-one abilities of their front three offered the most potential, and most often led to them being able to deliver crosses. That that was the case meant Chelsea committing fouls, and Wolves having opportunities at set-pieces, which also offered potential.

Thomas Tuchel's new team also applied a ball-oriented counter-press – particularly during the first half. Those closest to the ball during moments of transition sought to the surround the in-possession opponent and to force a mistake or turnover as early as possible and, if they did and a regain was made, another attack took place. That counter-press reduced in intensity as the evening progressed.