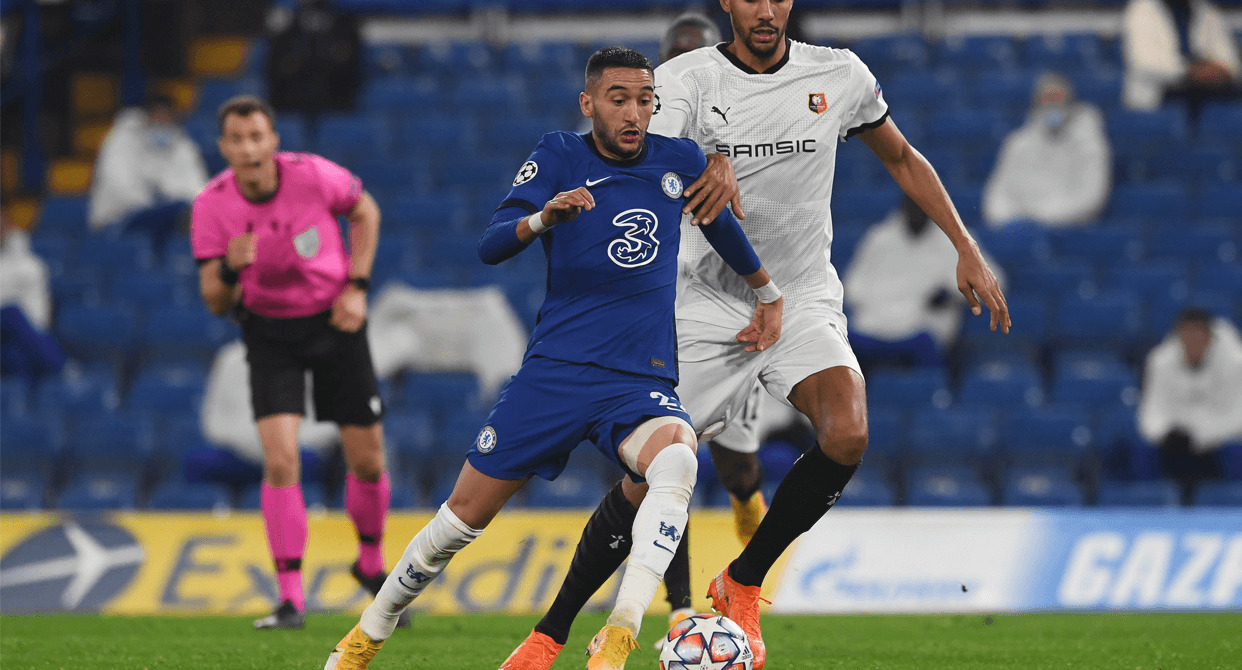 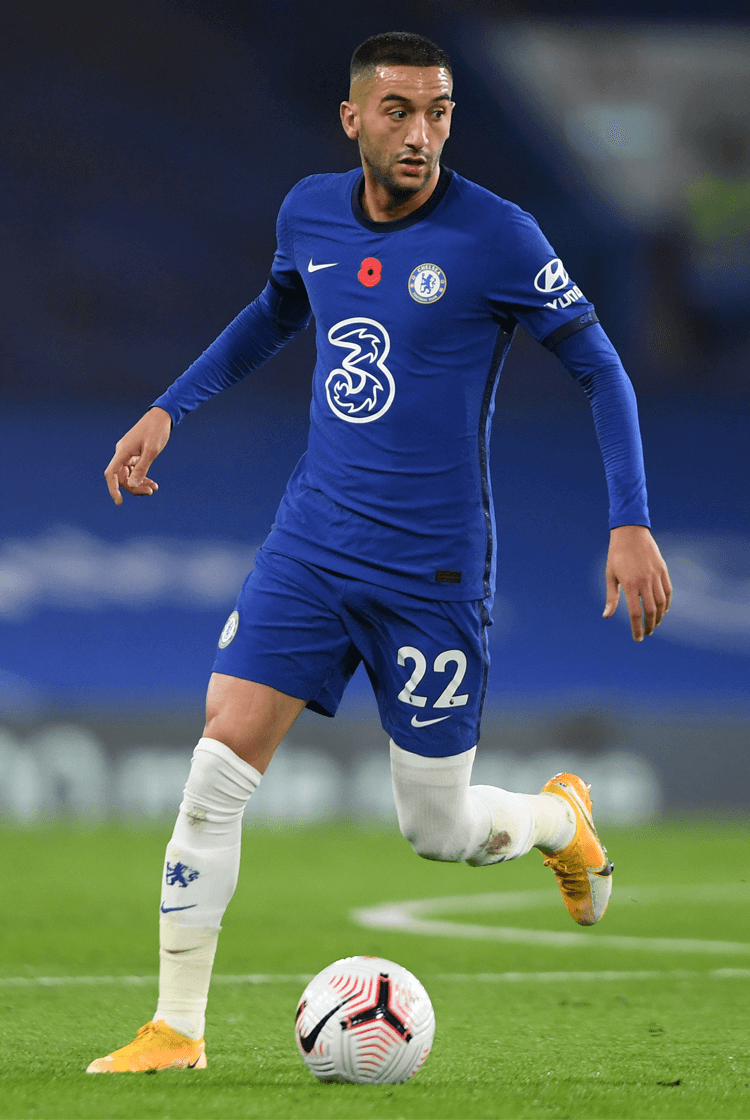 Profile
In a summer of spending that signalled real ambition for Frank Lampard and Chelsea, Hakim Ziyech’s arrival from Ajax for around £35m was not the headline act. Nevertheless, few other Premier League signings have looked so instantly at home as Ziyech has at Stamford Bridge, and he has quickly shown he has the potential to make a sustained impact. Lampard, keen to create an environment in which the Moroccan can reproduce the form that helped Ajax reach the 2018/19 Champions League semi final, has immediately been impressed.

“With Hakim, we have brought in someone with a real different quality to what we’ve had here in recent years – a left-footed right-sided player,” Lampard said. “He plays in a way that is very much about opening up chances for others with his crossing ability and his final pass. He’s got great confidence and he is a dream to work with.”

Tactical analysis
Ziyech is a right winger who likes to take up a very wide starting position and then drive infield with the ball, on to his stronger foot and into positions where he poses his greatest threat. He is most dangerous coming into central areas and looking to play killer balls to teammates making diagonal runs towards goal, usually from the left. He is particularly skilled at playing deft balls over a defence with potent accuracy, and if his teammates time their runs well, they often very suddenly find themselves with a one-on-one shooting opportunity (below).

The dip with which Ziyech plays those balls is one of his greatest skills, not only because he so often creates clear-cut chances for his teammate, but also because he teases the opposition goalkeeper with a ball that looks like it might float through to them but drops short into the zone in front of goal. Ziyech is capable of manipulating the ball impressively, and that leads to him creating plenty of chances for his team.

He also regularly cuts inside from a wide starting position and targets the goal directly, meaning he provides a goalscoring threat similar to that posed by one of his predecessors at Chelsea, Arjen Robben. His slight frame and dribbling skills are reminiscent of Manchester City’s Riyad Mahrez, though he is far weaker on his right side than Mahrez, who can shoot with power with both feet, and that may be an area of his game that Ziyech should improve. He has incredible balance, speed and acceleration, is able to shake off the attention of an opponent with ease, and generally uses those qualities to create himself shooting opportunities, rather than going down the line to cross.

The threat he poses when he moves infield means he draws defenders towards him, creating gaps for others further forwards. That also works the other way – teammates know that when Ziyech moves towards goal they should make runs that take defenders away and create space for him to shoot, when he usually looks to bend his foot around the ball and aim for the far corner.

Role at Chelsea
The decision to sign Ziyech might at first have appeared slightly curious with so many other attacking midfield options at Chelsea. Callum Hudson-Odoi was keen to play more, Kai Havertz arrived for £71m from Bayer Leverkusen, and Christian Pulisic shone during 2019/20 as one of their best players. However, after Ziyech recovered from an injury that delayed his debut, the Moroccan quickly proved why Lampard was so keen to sign him.

Lampard was well aware that Reece James was ready to replace César Azpilicueta as his first-choice right-back. Azpilicueta, more than 10 years James’ senior and a far more defensive-minded full-back, showed little desire to overlap Willian, who was on the right side of Chelsea’s midfield prior to 2020/21. For James, however, that is very much part of his game.

James makes tireless runs on the right, into space that Ziyech creates with his movement into central positions, and while Azpilicueta attempted crosses from deeper positions, James likes to get closer to the byline. Lampard affords Ziyech the freedom to move wherever he wants across the pitch, and though the Moroccan is probably most comfortable in the half-spaces, he also goes looking for possession in a position you might expect of a number 10 (above) – a position he played occasionally for Ajax.

When Ziyech moves into a central position, James pushes up on the right, and Timo Werner joins Tammy Abraham in stretching the opposition by looking to make runs in behind. Ziyech is daring with his passes and quick to look for a killer ball, and those forwards know they can expect an attempted through ball soon after making that kind of movement. Werner, in particular, benefits from Ziyech’s accurate, clipped balls over the top, and as someone who is at his best bursting through on goal, he relishes Ziyech’s service.

When in a wider position, Ziyech can put a cross of his own into the penalty area, and his crossing ability has also proved an extremely useful addition at set-pieces, when his vicious, swinging deliveries are highly effective (above). He, James and Ben Chilwell look to have provided a significant upgrade in an area that Chelsea were less than impressive before Ziyech’s arrival – they scored 11 goals from set-pieces in the Premier League in 2019/20. After nine games of 2020/21, Chelsea had scored six league goals at set-piece situations – more than half of their total for the whole of the previous season. He's also another name to a long list of players in Chelsea's squad who pose a threat from direct free-kicks.

Out of possession, Ziyech is hard-working and willing to play his part. He presses with intensity and purpose – something that Lampard asks of his players – and he also shows a good understanding of his role in cutting off passing lanes from the opposition's defence into midfield once Chelsea are set up to defend. One area for improvement is at the point of a defensive transition, when he is sometimes slow to react and make a recovery run.

In Ziyech, Chelsea have a gem on their hands and, perhaps more than any other player in their array of summer signings, a player who has very quickly taken them to the next level.