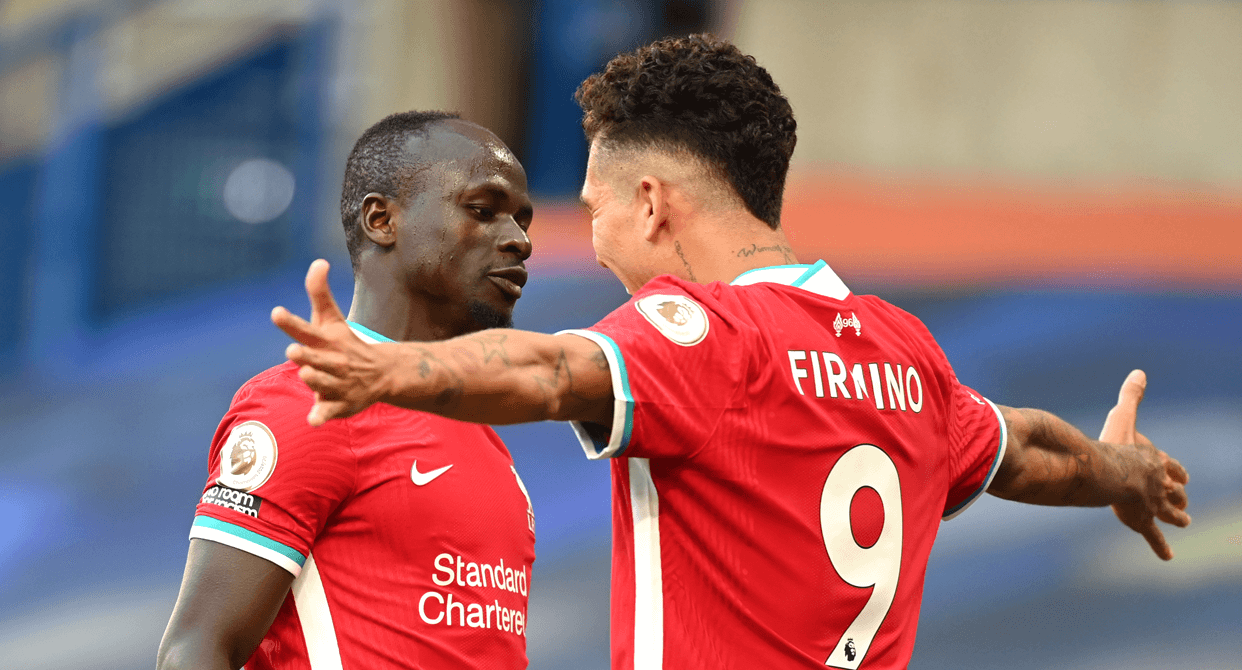 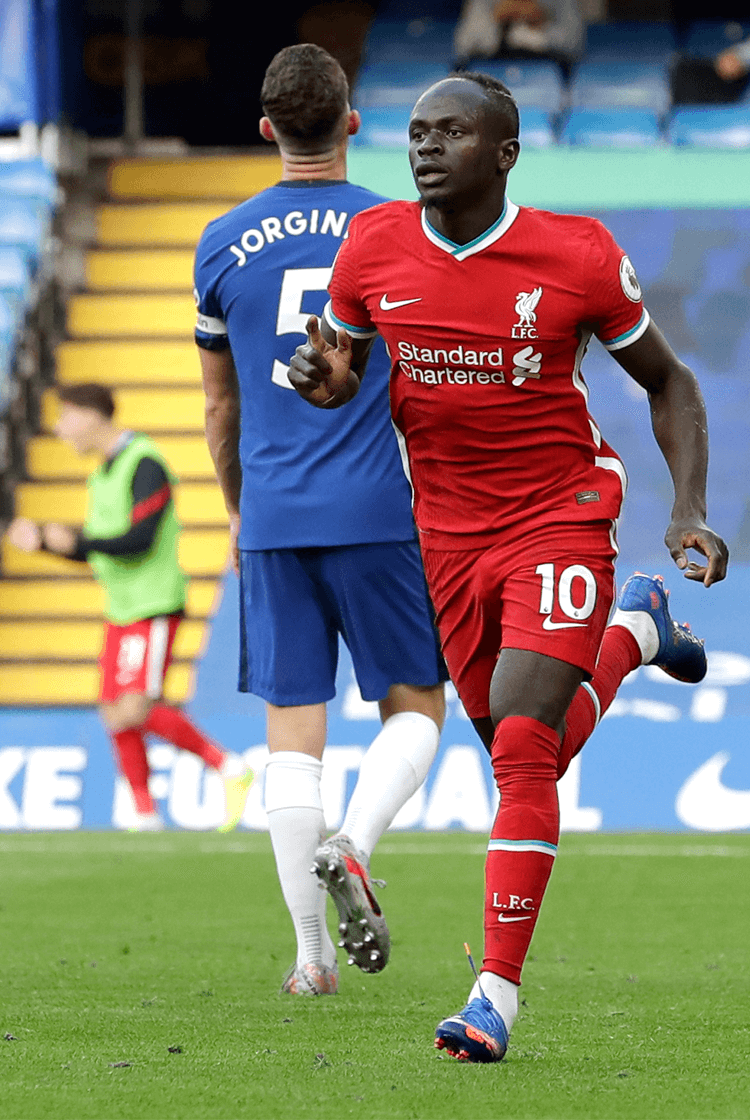 Liverpool reminded Chelsea of how difficult it will be to compete with them for the Premier League title after easing to victory at Stamford Bridge. Much has been made of the extent to which Frank Lampard's squad has been strengthened, but the new signing who most impressed was Thiago Alcantara, who Liverpool introduced as a second-half substitute. The visitors were already threatening when Andreas Christensen was sent off on the stroke of half-time, and they thereafter became increasingly comfortable as Sadio Mané scored two second-half goals to make them the first reigning champions to win away at Chelsea in the Premier League since Manchester United in April 2002. Jorginho's effort being saved by Alisson represented the first time in nine attempts that he has failed to score for Chelsea from the penalty spot. No Chelsea player completed more passes, with a total of 75, or had more touches, with 89, than Thiago. His 75 successful passes was the most by a player to play 45 or fewer minutes in a Premier League game since 2003/04, when those records began. 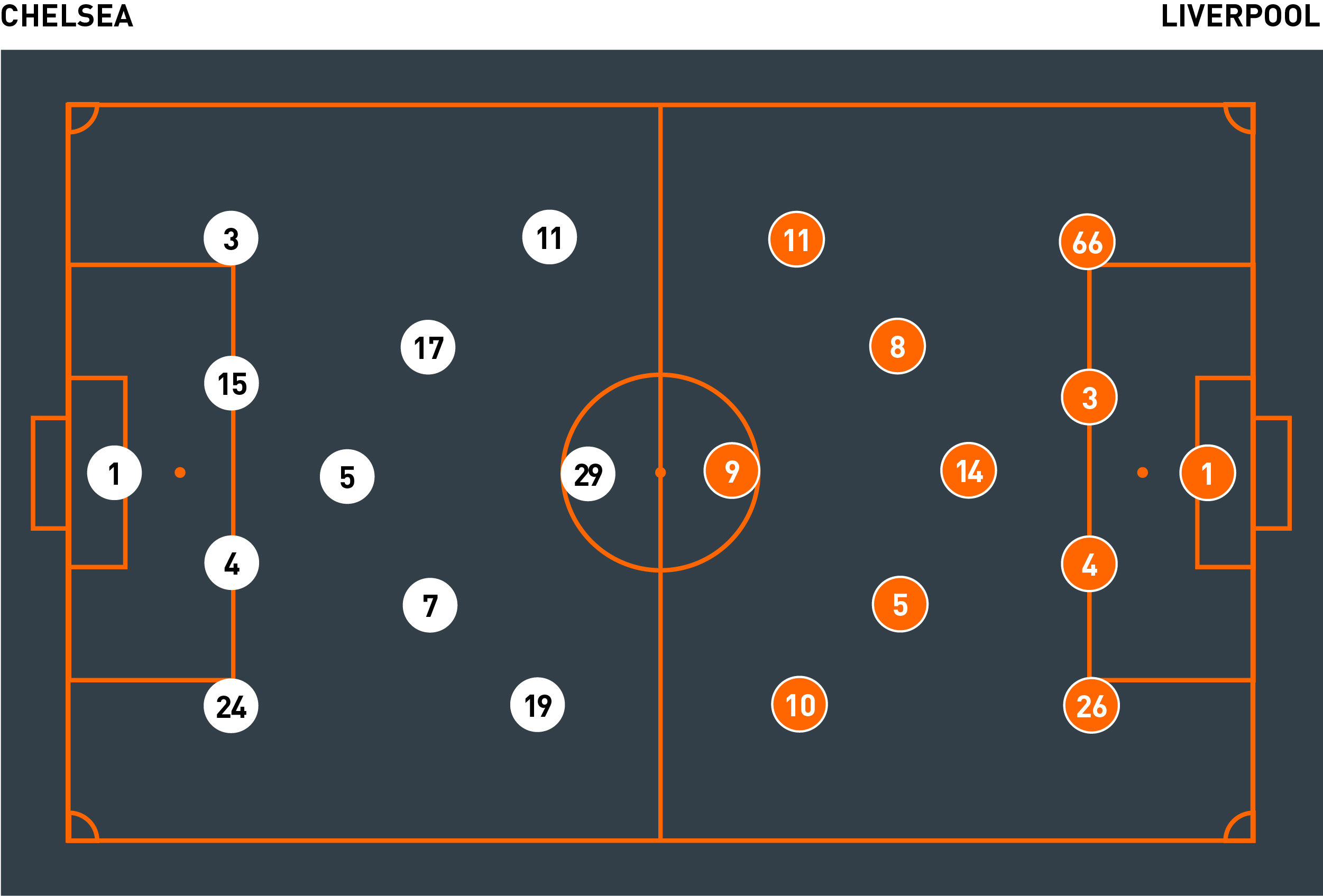 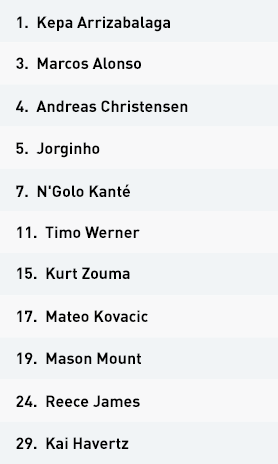 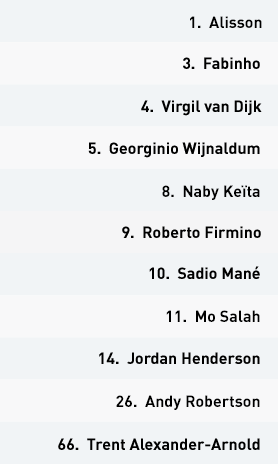 Chelsea were organised by their manager Frank Lampard into a 4-3-3 formation led by the front three of Mason Mount, Kai Havertz and Timo Werner. They encountered visitors who also remained in a 4-3-3.

They attempted to build possession from defence, but were confronted by an aggressive, co-ordinated press. Mo Salah and Sadio Mané pressed the outside shoulder of their central defenders, limiting access to their full-backs, and Roberto Firmino withdrew to screen Jorginho; Salah and Mané would also move to press Kepa Arrizabalaga if possession travelled to him. With Georginio Wijnaldum and Naby Keïta respectively prioritising N'Golo Kanté and Mateo Kovacic, Jordan Henderson remained free to protect the back four behind him and to monitor Havertz, should he withdraw into a central position. If Chelsea succeeded in transferring possession across their defensive line, the relevant Liverpool full-back would advance to contribute to their press.

During the first half Havertz withdrew to link play, and moved from Henderson's blindside into the ball-side half-space to create potential two-on-ones in midfield, but Chelsea struggled to progress possession, and instead threatened via Werner's runs behind Liverpool's defence. Had Fabinho not been so aware and therefore capable of delaying Werner's efforts and defending one-on-one against him, the hosts would have proved far more potent.


Chelsea were also predictable in midfield, where their movements did little to unsettle their direct opponents. When Andreas Christensen's dismissal led to Havertz being replaced by Fikayo Tomori and Chelsea adopting a 4-3-2, they became reliant on moments of transition and the early ball in behind to Werner but, for all that them playing with 10 men didn't help, they were demonstrating similar limitations with 11.

Their midfield offered too little creativity and attacking threat. There were occasions where Mount or Werner moved wide to provide a passing option, leaving a space for an attacking midfielder to advance into, but Kanté and Kovacic lack the attacking instincts to do so, contributing to Chelsea's lack of variety and the predictability Liverpool were comfortable defending against. Even when Reece James and Marcos Alonso were encouraged to advance from full-back, they struggled to consistently do so, owing to Liverpool's potential on the counter.

Liverpool again adopted Jürgen Klopp's favoured 4-3-3 formation, which on this occasion featured Fabinho out of position in central defence alongside Virgil van Dijk, and therefore Jordan Henderson at the base of their midfield. Their opponents defended with a 4-5-1.

Chelsea sought to apply a mid-press led by Timo Werner and Mason Mount on the outside shoulder of Liverpool's central defenders, but without particular intensity or aggression, and their midfield three remained compact to discourage progress in central areas of the pitch. The visitors adjusted by Henderson withdrawing into a quarterback's role, from where he looked up and dictated play. With Roberto Firmino also withdrawing into a deeper position, a four-on-three existed against Chelsea's midfield; even if Werner and Mount moved infield against that, Andy Robertson and Trent Alexander-Arnold had increased spaces out wide.

Sadio Mané playing in the left half-space and positioning himself on Reece James' right shoulder also tested Chelsea; his presence on James' blindside meant he could make runs across him that James would struggle to time – as was the case for his first goal – and encouraged Robertson to operate on Mount's blindside and create a potential two-on-one. It also contributed to Naby Keïta moving across to play on the left of Liverpool's midfield three, from where Georginio Wijnaldum could then advance. The presence they offered towards the left offered significant potential, particularly when combined with Henderson's diagonal passes.


After Andreas Christensen's dismissal, Chelsea reorganised into a 4-3-2, but Liverpool's success in recycling possession and switching play forced them to instead use Mount in midfield in a 4-4-1. If they became more balanced, they found it increasingly difficult to pose an attacking threat, and Liverpool remained fluid and offered rotations both centrally and out wide in their attacking half.

Firmino withdrew while Wijnaldum advanced; Mo Salah withdrew – and played off fewer touches than he normally would – while Alexander-Arnold moved forwards. Salah's intelligence, and the one-touch combinations he executed with those around him, also contributed to Chelsea's defence becoming unbalanced, as it did when Liverpool scored their first goal.

Klopp's team particularly impressed at emptying and using spaces with their fluidity. When possession travelled wide it was complemented by a diagonal run in behind the relevant full-back – Salah, Alexander-Arnold, Keïta and Firmino all contributed them, making it difficult for Chelsea to track them.

The introduction of Thiago Alcantara then gave a focal point through which to play. The midfielder consistently sought to support play and receive possession and provided a variety of passing options, even if he favoured playing diagonally and in front of Chelsea's midfield, looking for a way to penetrate through. As was the case in their victory over Leeds, Liverpool created few clear goalscoring chances from their build-up play, but still succeeded in securing all three points.