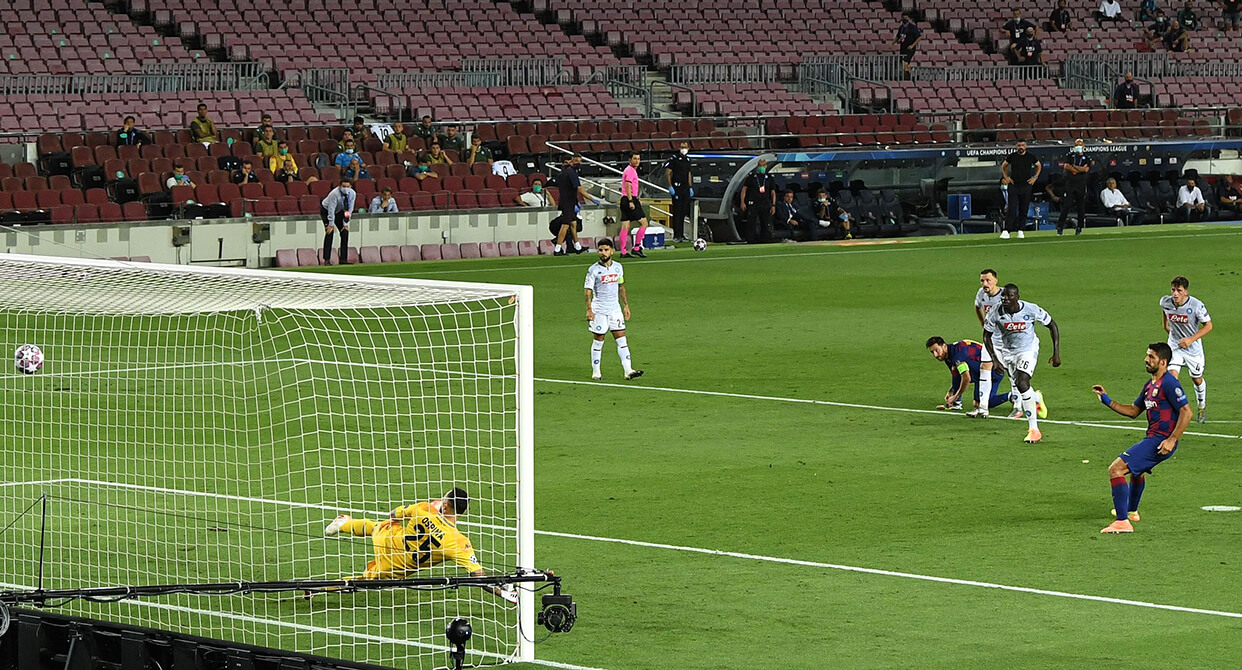 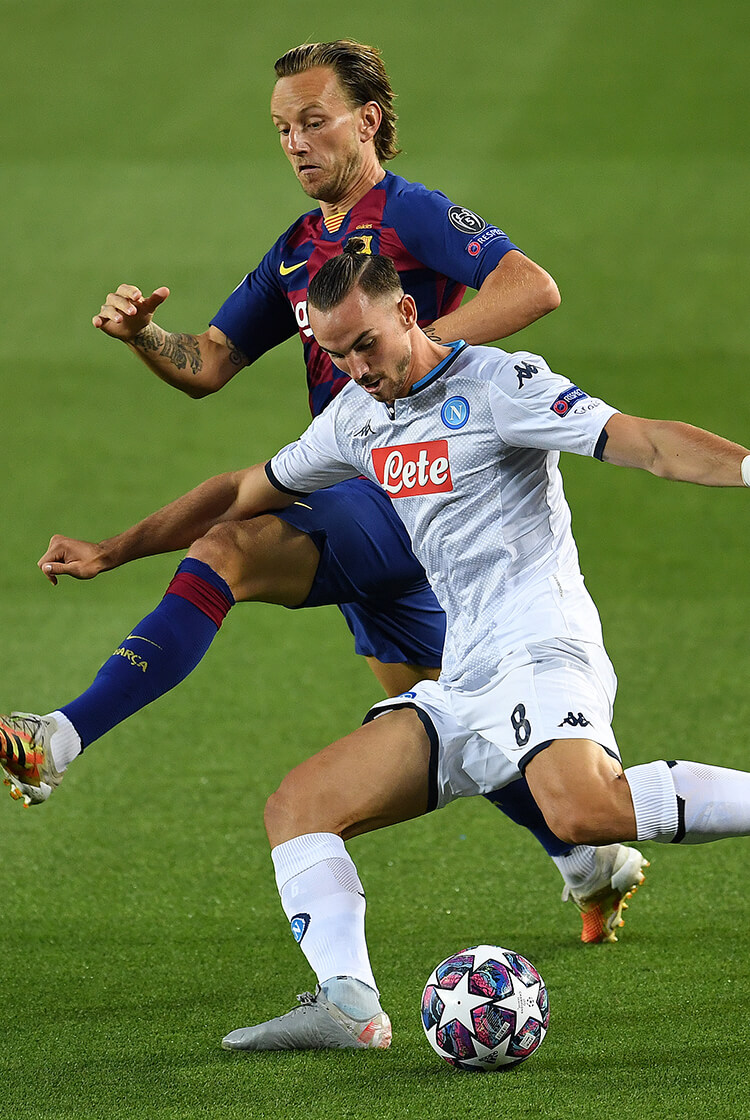 Barcelona progressed to the quarter finals of the Champions League, where they will be confronted by Bayern Munich, having eliminated Napoli at Camp Nou. After Clement Lenglet headed Quique Setién's team into the lead, Lionel Messi produced a typically impressive run and finish to double that lead, and Luis Suárez scored from the penalty spot to put them 3-0 up on the stroke of half-time. Messi had by then already had a second ruled out, for handball, by the Video Assistant Referee (VAR), but the VAR then awarded him the penalty from which Suárez struck. Ivan Rakitic fouled Dries Mertens to concede a further penalty even later in the first half, and though Lorenzo Insigne scored, after Arkadiusz Milik's finish was ruled out for offside Napoli offered too little in response. "All the rivals who are left are strong and there are only complicated matches left," said Setién, whose team suffered the disappointment of seeing rivals Real Madrid win the Liga title. "It will be tough for us but for Bayern too. They're a great side but so are we." 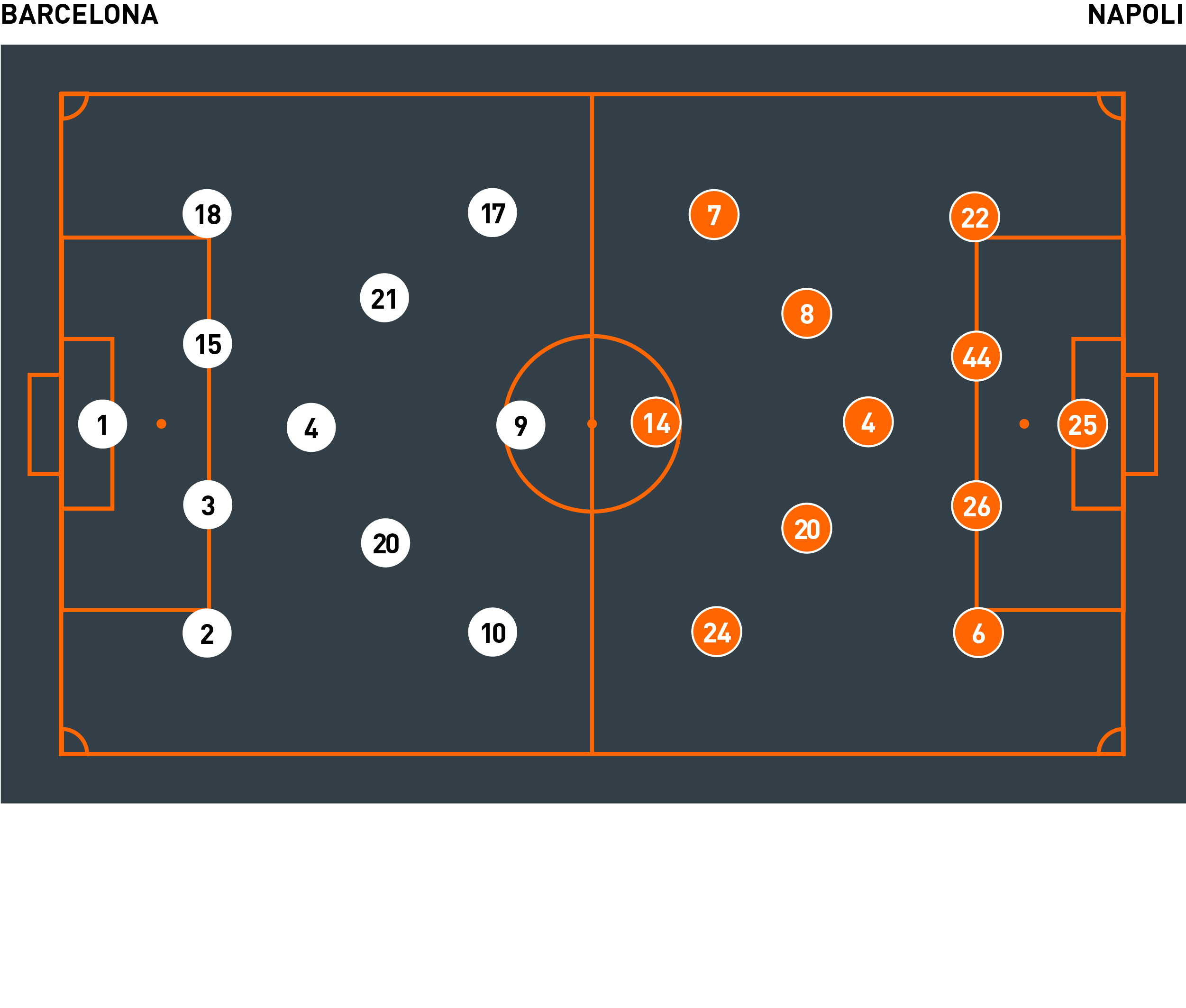 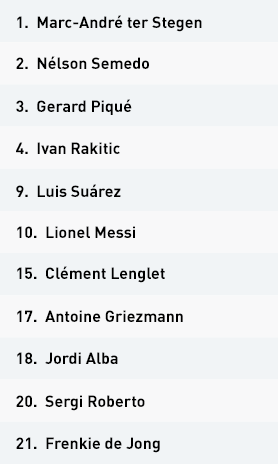 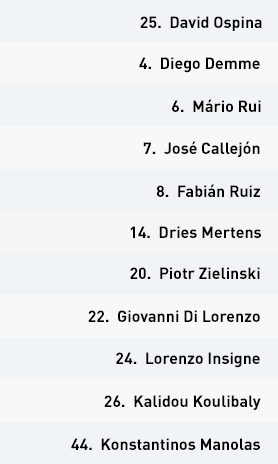 Quique Setién set Barcelona up in a 4-3-3 formation, against the 4-1-4-1 Napoli used. Their setup was subtly different to Napoli’s, because they used both their central midfielders and wide attackers, Lionel Messi and Antoine Griezmann, in deeper and narrower positions, which encouraged Nélson Semedo and Jordi Alba to advance from full-back and to provide their width.

The deployment of Messi and Griezmann in deeper roles meant Barca outnumbered Napoli in central areas, making penetrations fairly straightforward. Luis Suárez stretched the pitch vertically and often stood in an offside position to discourage Napoli’s centre-backs, Kalidou Koulibaly and Kostas Manolas, from following Griezmann or Messi into midfield. Suárez effectively pinned all four opposing defenders back simply by adopting that position, and was helped in doing so by the advanced positions of Barca’s full-backs.

Napoli responded by using a narrower midfield that involved José Callejón and Lorenzo Insigne tucking in. This created more spaces in wide areas, but Barca still tried to play inside first before switching play out into wide territory.


Napoli’s press in the first half could not stem the flow of Barca’s attacks. Dries Mertens sought to screen Ivan Rakitic and pressure the ball-carrying centre-back while also stopping passes into Rakitic. If doing so proved beyond him, Napoli’s wider central midfielders, Fabián Ruiz and Piotr Zielinski, moved to press the ball-carrying centre-back on their side. It therefore became easier for the hosts to progress possession because one of their central midfielders was free to move to their opponent’s blindside, and to create a passing line from the centre-back. Callejón or Insigne withdrew to cover that pass, but their movement then created a more dangerous passing line straight to Messi or Griezmann, or out to a full-back. Diego Demme’s role in the first half was to attempt to negate those efforts between the lines, but he was overloaded by Messi and Griezmann, and therefore often chased shadows.

After scoring two goals inside the opening 25 minutes, Barca slowed down and were happy to retain possession. In the second half – still with a two-goal lead but leading 3-1 – they continued to use their central midfielders in deeper positions and close to each other. Doing so effectively allowed them to comfortably control the game; it invited them to continue to overload their midfield, and it meant that they could play penetrative passes from deep to find their advanced full-backs’ runs. With Messi and Griezmann excellent at drawing pressure towards them in deeper positions, Barca consistently penetrated in central areas. They were also in complete control at defensive transitions, because their three midfielders and two centre-backs were ready to negate counter-attacks.

Despite their overall control, they didn’t create many clear goalscoring chances. Their opening goal came from a corner; the second through a chance that perhaps only Messi could score from, and the third from a penalty after the Argentinian pressed effectively.

Gennaro Gattuso organised Napoli into a 4-3-3 formation, led by the front line of Lorenzo Insigne, José Callejón and Dries Mertens. Barcelona remained in their 4-3-3. Napoli sought to use their two wider central midfielders, Fabián Ruiz and Piotr Zielinski, as attacking midfielders and for Insigne and Callejon to provide their width by adopting positions on the touchlines. Minimal room existed for full-backs Giovanni Di Lorenzo and Mário Rui to advance into, so they instead positioned themselves more narrowly, and Di Lorenzo even occasionally operated in central midfield alongside Diego Demme. The positions of their two advanced central midfielders ultimately meant Napoli had a five-point attack.

What was more problematic was that their wide attackers were stationed in line with Barca's defence, ensuring that when possession was played out to those players they were too close to Barca's full-backs, who were in a reasonable position to defend. The next phase of their attack had to be a penetrative run beyond Barca's defensive line from Fabián or Zielinski, but the direction of the penetrative run was towards the corner flag from inside, making it easier for Barca to shepherd the ball away from goal if a pass did make it through. Napoli had significant difficulty in penetrating their hosts' defensive line, and they struggled to create quality goalscoring chances.

Barca used Luis Suárez to screen switches of play between Napoli's centre-backs and therefore forced the ball towards one wing. Their relative reluctance to press Napoli's attackers near the penalty area also meant that they instead delayed their engagement until the halfway line.


When Napoli’s full-backs came inside to contribute in midfield they were occasionally able to penetrate around Barca’s narrow midfield, so the relevant full-back advanced into the half-space and created two-on-ones or three-on-twos high up the pitch. Penetrations beyond their defensive line continued to prove extremely hard to achieve, however, so Napoli clipped passes in behind Barca's defence for their attackers to run on to. Barca largely dealt with those, and blocked a number of the low crosses Napoli had attempted.

The introduction of Arkadiusz Milik as Napoli’s centre-forward provided a significantly improved focal point for them to deliver crosses into the penalty area from deeper positions. The first they attempted resulted in Milik’s header reaching the back of the net, but was ruled offside.

As the game reached its final stages, Napoli became more aggressive, and play almost entirely unfolded in Barca’s half. Quique Setién's team regardless retained numbers behind the ball, making central penetrations exceptionally difficult and allowing Napoli only to play around and in front of them. Napoli's full-backs began advancing more in the final 10 minutes and Napoli created some promising two-on-ones in wide areas that led to good crossing opportunities, though Marc-André ter Stegen dealt with their attempts on goal. Had Napoli taken a more aggressive approach from an earlier stage and perhaps started Milik there may have been a different outcome.