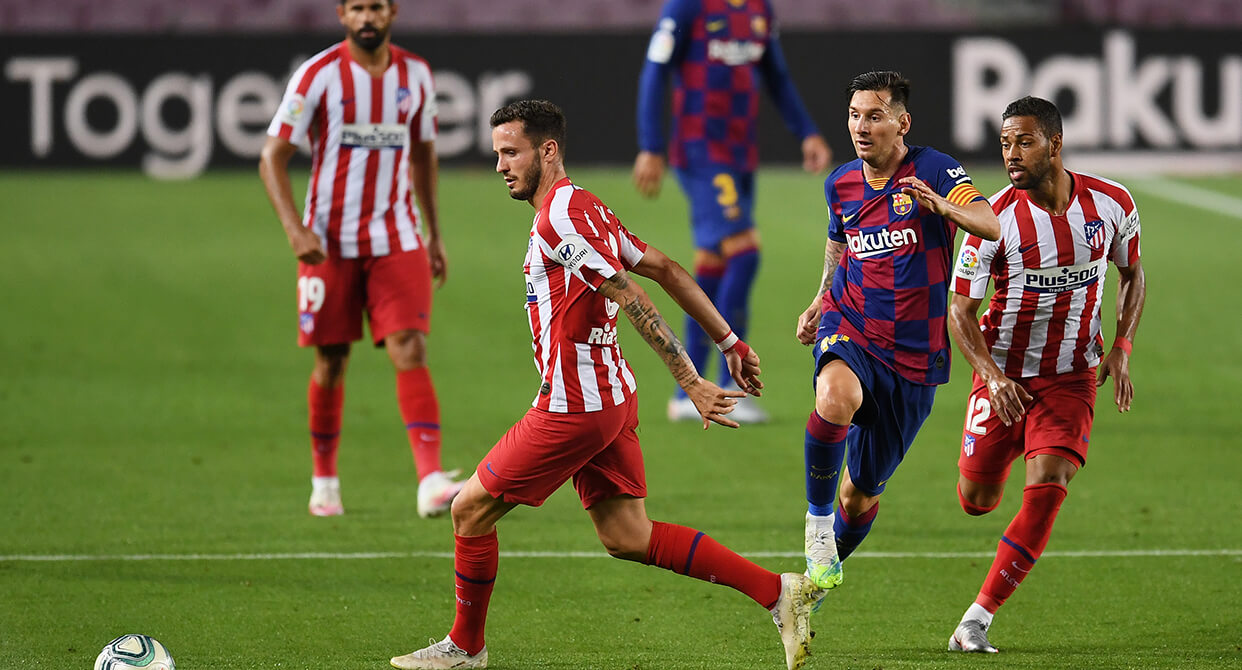 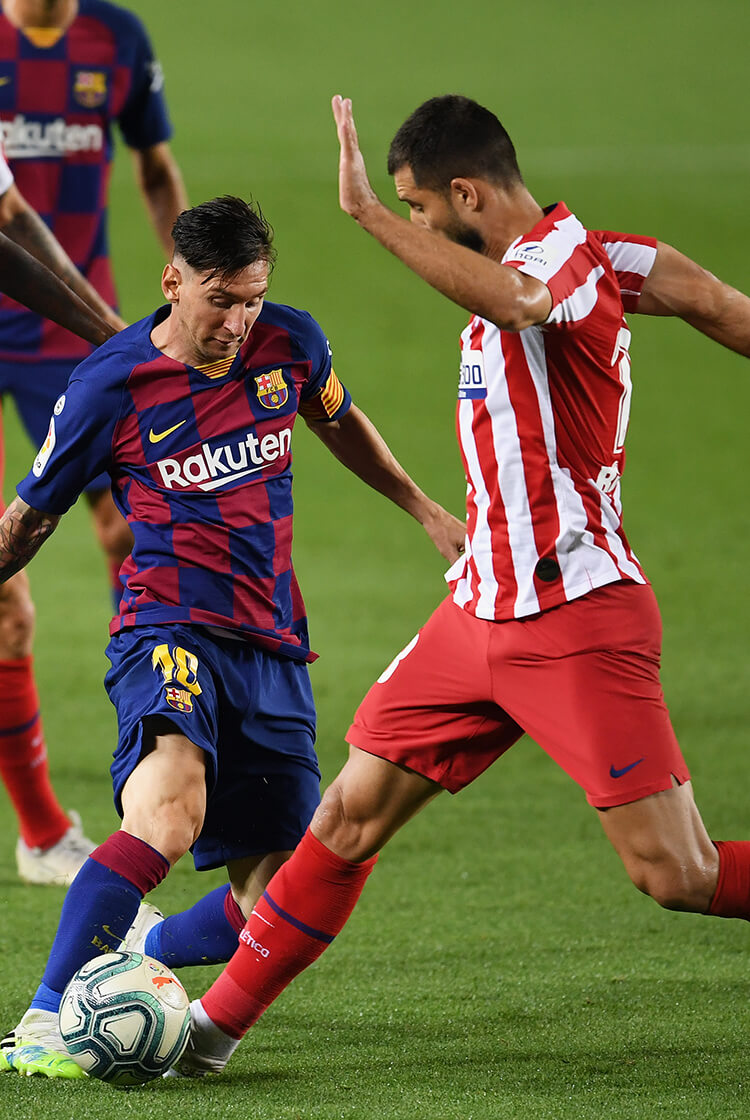 Lionel Messi scored the 700th goal of his career, from the penalty spot, when Barcelona were held by rivals Atlético Madrid in La Liga. The Argentinian struck a Panenka to put his team 2-1 up after Saúl Ñíguez's first penalty cancelled out Diego Costa's own goal, but experienced the frustration of Barca dropping points when Saúl later scored with a further penalty. Their draw cost them the chance to move in front of Liga leaders Real Madrid, who in addition to a one-point advantage, have a game in hand over their closest challengers. Messi's penalty also represented his 630th goal in his 724th appearance for Barca. "I admire him for a lot of reasons," Czech favourite Antonin Panenka has previously said of Messi. "He is a role model for young players and he just focuses on football. I can say to people that Messi copied my penalty." 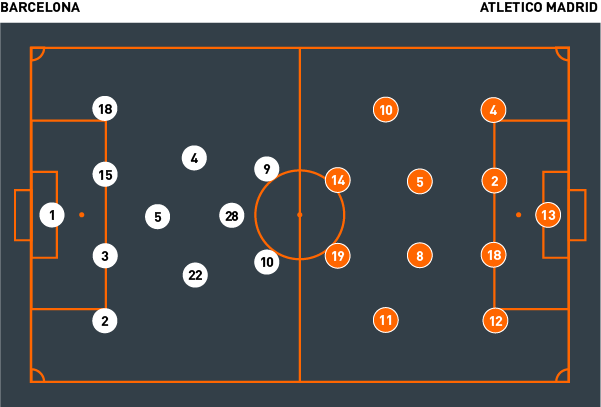 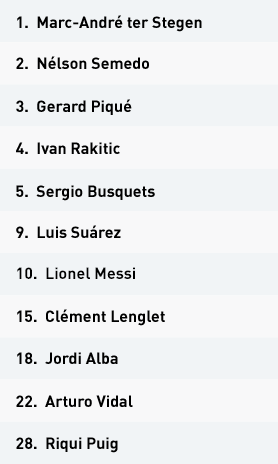 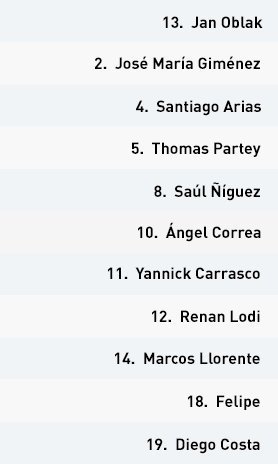 Barcelona manager Quique Setién set his side up in a four-diamond-two formation, featuring the 20-year-old Riqui Puig at the tip of that diamond, during the periods they had possession. Atlético Madrid used their usual flat 4-4-2 when they were without it.

The hosts were forced to attempt to break down a typically organised and compact defensive block. They built from the back, through Ivan Rakitic dropping from midfield and into their defensive line to form a three-on-two against the first line of Atléti’s block. Atléti's front two remained narrow to screen passes into Sergio Busquets in central midfield, but doing so then invited those positioned wider in that overload to advance into the half-spaces that existed.

Atléti adapted by pushing their forwards wider, and instead using one of their central midfielders – Saúl Ñiguez or Thomas Partey – to press Busquets to ensure that he couldn’t turn once he had received possession. Barca found it exceptionally difficult to advance through the central areas of the pitch, so they relentlessly circulated possession in pursuit of a way to advance

Through circulating the ball both horizontally and diagonally Barca gradually progressed forwards, and they switched play from half-space to half-space or from the centre of the pitch to a wide position to advance beyond Atléti’s attack. The tireless work of the visitors' front two was integral in allowing their midfield to remain compact; they closed down Rakitic, instead of one of their wide midfielders doing so.


When Barca moved possession to one of their full-backs, the relevant wide midfielder closed him down while the ball-side forward provided cover, ultimately preventing Barca from breaking that first line with a pass into midfield, and forcing the full-back to pass to the central defender. With their midfield diamond they should have been able to create a four-on-two overload against Thomas and Saúl, but they struggled to find their central players in promising positions.

Barca looked slightly more threatening when they positioned players between Atleti’s midfield, creating spaces in wide areas that could be exploited with sharp diagonal passes that eliminated the visitors’ midfield. They didn’t succeed in doing this frequently, however, and when they did Atléti’s players worked extremely hard to get across to shut their attacks down and to block passes into their attackers.

Atléti also made it difficult for Barca to access Puig, and Luis Suárez and Lionel Messi, though the latter dropped into deeper and wider areas to collect possession as the evening wore on. Barca recorded an xG of just 1.44 – lower than their opponents’ total of 1.86, despite them also having 69 per cent possession – and their goals came from the penalty spot and a fortuitous own goal from a corner. A performance typical of Atlético Madrid and their defensive organisation had succeeded against Barca’s attacking play.

Atlético Madrid were organised by their manager Diego Simeone into their familiar 4-4-2 formation, led by the front two of Diego Costa and Marcos Llorente, both when they did and didn't have possession. Hosts Barcelona also adopted a 4-4-2 during the periods they had to defend.

When Atléti had possession, Ángel Correa and Yannick Carrasco often drifted inside so that Santiago Arias and Renan Lodi could advance from full-back, and Thomas Partey and Saúl Ñíguez offered support from central midfield. Carrasco and Correa often occupied the half-spaces and would seek to combine with their teammates to create spaces in Barca's defence and opportunities to penetrate behind them.

When Barca pressed high, Lionel Messi and Luis Suárez led their press; if they didn't they used a 4-4-2 mid-block that featured Arturo Vidal and Ivan Rakitic operating as their wide midfielders. Beyond the combinations Atléti attempted to execute, their dynamic players were, where possible, instructed to run with the ball to create fast penetrations. Thomas and Carrasco were particularly effective at doing so, and regularly advanced, and drew fouls. During transitions they also sought to advance quickly, through either quick passes or by running with the ball.

While carrying possession, Atléti attempted to move runners beyond the ball carrier to create the next passing option. Their use of their wide midfielders in more central positions was particularly effective on the occasions Barca sought to press high, because it forced Barca's back four to become more compact, and therefore invited their full-backs to advance further.

When Atléti were also able to take advantage of the spaces outside of Barca's four-diamond-two – before they could retreat into their mid-block – they also threatened their hosts. Barca sought to counter-press aggressively upon losing possession. Riqui Puig was particularly effective at doing so; he often reached his opponent’s blindside and stole possession within the first two passes. It was when Atléti bypassed the initial counter-press and moved the ball away from pressure that they took advantage of those spaces outside of them.