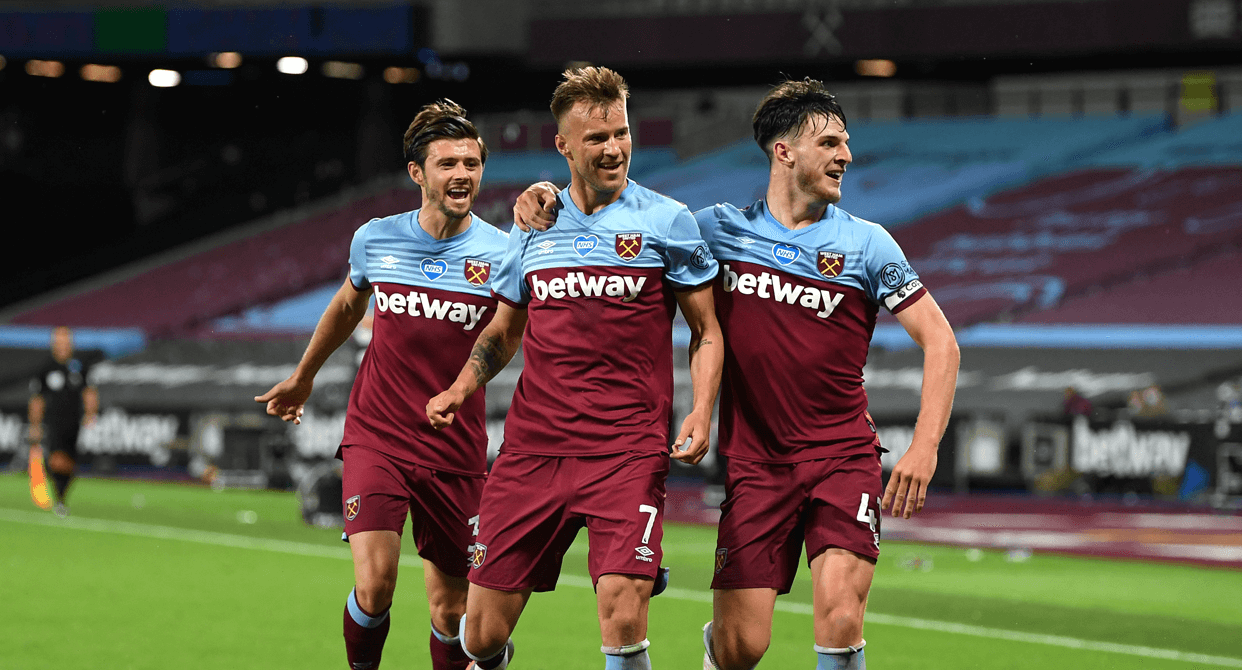 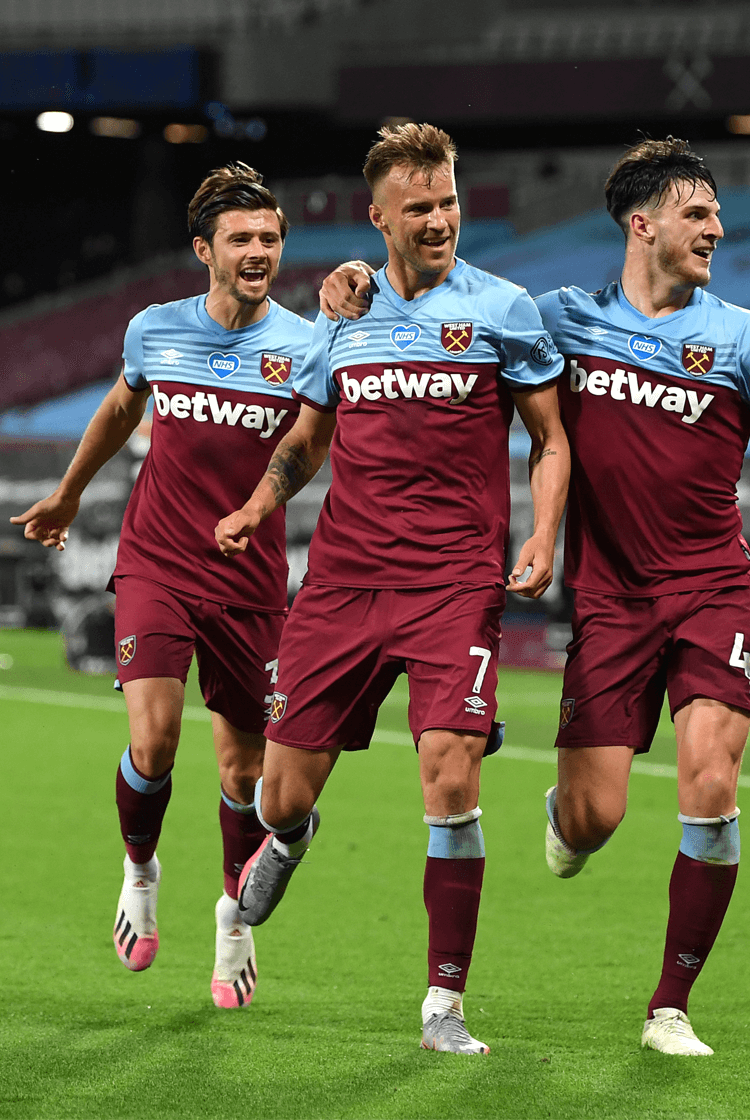 A dramatic, late finish from Andriy Yarmolenko strengthened West Ham's hopes of survival as much as it threatened Chelsea's pursuit of the top four. David Moyes' team had already experienced Tomas Soucek having a first-half strike ruled out by the Video Assistant Referee (VAR) when the Czech scored on the stroke of half-time to cancel out Willian's penalty. Michael Antonio gave West Ham the lead before a further goal from Willian left both London teams chasing a winning goal – one that came when substitute Yarmolenko finished an impressive counter-attack in the 89th minute. Their victory ended a run of 20 matches in which they have lost when conceding the first goal in the Premier League. It also meant that in winning three of their seven home league fixtures since Moyes' appointment as the successor to Manuel Pellegrini, they have won one more match than they did in nine in the Premier League at the London Stadium under the Chilean earlier in 2019/20. 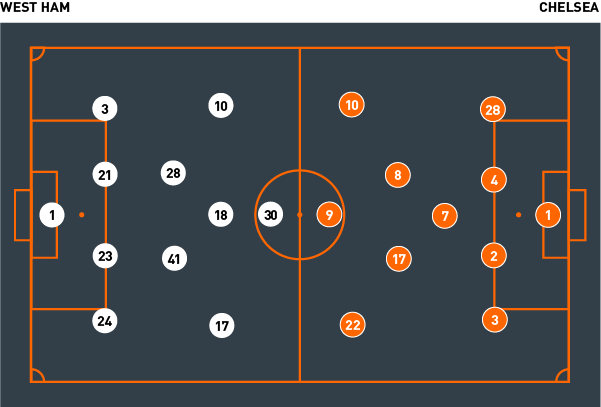 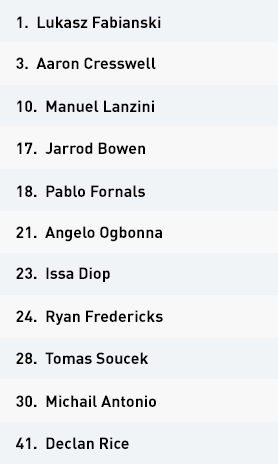 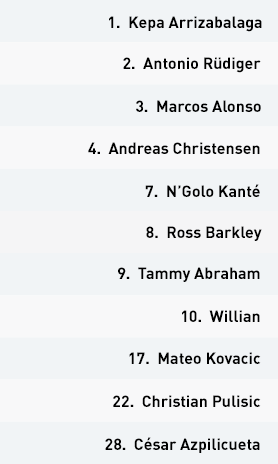 West Ham were organised by their manager David Moyes into a 4-2-3-1 formation, built on the double pivot provided by Tomas Soucek and Declan Rice at the base of midfield, during the periods they had possession. They encountered opponents who largely dominated possession, contributing to Soucek being drawn out of position by Mateo Kovacic, and Rice therefore having to cover the spaces Soucek was vacating.

Chelsea built more effectively towards the right, drawing their opponents as they did so, before attempting to advance towards the left; they also sought to advance into the spaces in between the lines, but West Ham were sufficiently compact in the defensive third that they rarely succeeded. Marcos Alonso’s desire to advance created spaces West Ham could have attacked; Rice willingly carried possession forwards, but Jarrod Bowen and Pablo Fornals admirably following Chelsea’s full-backs meant that they had too few numbers in the final third and had to play wide.


Even on the occasions Michail Antonio or Manuel Lanzini succeeded in securing possession, they proved incapable of continuing to progress the hosts’ attacks, and their transitional play therefore often came to little. Against that, Chelsea also continued to dominate the ball. Their defensive responsibilities soon contributed to West Ham adopting a 4-4-1-1, and having an even greater struggle to consistently capitalise on the spaces created by the visitors’ attacking full-backs. After Soucek’s effort was ruled out for offside, a near-identical finish from the midfielder stood, and again came from a corner secured from a wider transition into those spaces.

They took the lead during the second half when Rice supported of those in front of him, from the base of midfield, contributed to Bowen crossing towards Antonio, and the forward finishing when Chelsea were struggling to screen the movements offered around their penalty area. West Ham were posing an increased threat during transitions, given Chelsea’s struggles to screen their route to their number 10 – Fornals, Lanzini and Bowen often rotated – from passes out of their deep, defensive block. Passes quickly played to those wingers attempting to dribble into more central areas of the pitch, and the focal point offered by Antonio, were also influential.

Even if Chelsea scored again despite being imbalanced during transitions, and the influence of N’Golo Kanté contributing to them again dominating the ball and the hosts again having to defend their penalty area for lengthy periods, one last attacking transition brought them victory. Antonio secured possession against Chelsea’s central defenders and found Yarmolenko, who provided the finishing touch.

Chelsea built play using a 4-3-3 structure when they had possession, but Frank Lampard set his team up to create asymmetrical patterns of attack. Mateo Kovacic dropped to the left side of midfield pivot N’Golo Kanté, inviting Marcos Alonso to move higher up the pitch from left-back, and Christian Pulisic to move infield. The American provided Tammy Abraham with his closest support throughout the game; the right side of Chelsea's structure offered an alternate attacking route.

Willian largely held his width on the right, and Ross Barkley moved to the side of West Ham’s double pivot to be nearer to Willian to attempt to find a way around West Ham’s 4-2-3-1 mid-block. As Kovacic withdrew, and drew West Ham towards the right side of the pitch, Chelsea sought to play quick switches across the pitch to move deeper into West Ham’s half. Willian then moved inside – either with the ball or without it – with the support of César Azpilicueta advancing from right-back to provide support, meaning Chelsea had both full-backs advancing.

With both full-backs high, Chelsea’s cental defenders had to be ready to defend the wider spaces. In the rare moments where Chelsea were required to form a block, they utilised a 4-2-3-1 structure, through Barkley moving to operate as their number 10 position, and Kovacic moving infield to play alongside Kanté. Owing this shape being similar to their attacking formation, Chelsea had few issues when defending West Ham's rare breaks during the first half. Despite their relative dominance before the break, however, they were level at half-time. West Ham found the back of the net from two corners – their first effort was disallowed following a review from the Video Assistant Referee – either side of Willian converting a penalty won by Pulisic after he had again drifted infield to towards Abraham.


After going 2-1 down, Chelsea pushed forward. Pulisic moved even further centrally from the left, and Alonso more frequently overlapped. Replacing Kovacic with Mason Mount regardless meant that Chelsea lost balance during their build-up play, owing to Mount's probing runs through the inside left space vacated by Pulisic. West Ham’s defensive midfielder, Tomas Soucek, was no longer drawn out of his position, and Chelsea couldn't then penetrate through the central lane to the same extent. They were instead forced out wide, to their advanced full-backs.

With Mount making forward runs, Chelsea left central spaces that invited West Ham to bounce passes off of Pablo Fornals and Michail Antonio, and then out to their dangerous wide players. Another substitute, Ruben Loftus-Cheek, made runs deep into the penalty area to attack crosses from their full-backs, and Mount and Kanté were also advanced as they pursued an equalising goal, even amid West Ham's continued counter-attacking threat.

After Willian’s free-kick had drawn Chelsea level, Kanté sat back during his side’s build-up play. He resisted moving ahead of play, and proving key in snuffing out West Ham’s attempts to break. He repeatedly made interventions that maintained pressure on West Ham’s goal, and he prevented the hosts from breaking by winning possession and starting further attacks. He was beaten in the game’s dying moments, however, and the visitors took advantage by breaking clear at pace before Andriy Yarmolenko scored.