Profile
Of the many millions West Ham have invested in creative midfielders in an attempt to transform their team into one capable of challenging for qualification for European football, the £24m spent on Pablo Fornals, aged 23 at the point of his arrival from Villarreal in June 2019, may yet prove the shrewdest. A club often perceived to recruit ageing, declining players bought one whose best years were expected to be in front of him, and as he was helping Spain to win the Under-21 European Championships.

If he is threatening to offer a level of consistency that has largely appeared beyond Manuel Lanzini, Jack Wilshere, Felipe Anderson, Andriy Yarmolenko and more, he is also – like one-time Spain Under-21 teammates Dani Ceballos, Fabián Ruiz and Dani Olmo – perhaps on course to fulfil his considerable potential. That he was capped by the senior team at the age of 20 also demonstrates the extent to which he is admired in Spain.

Tactical analysis
The timing of Fornals’ movements is a significant strength, particularly when he features as a number 10, and therefore seeks to receive passes and set-backs from wide players or the striker in front of him, drifting and roaming throughout the three central lanes (below) before detecting the correct moment to accelerate and then receive in space. If he is far from explosive, that timing, and the awareness that means he recognises the very moment opponents turn their bodies way from him or are prioritising the passing lanes into him, means that he ably overcomes that and creates the time and space he so often relishes.

If he is instead playing from the left, he moves infield at an early point of an attack in an attempt to link with those making runs through the middle or towards the right, who he so often targets with diagonal passes between or around the opposition’s defenders. Attackers moving away from those defenders, or right-sided wingers running infield, particularly complement the passes he is so capable of playing with the outside of his boot or from his laces or instep. It is regardless from the left that he offers fewer movements, because from there he is less positionally aware. Should opponents sufficiently populate the left inside channel, his potential influence is reduced – largely because of his relative ineffectiveness when attempting to dribble.

It is when intense pressure is being directed towards him, regardless of his position, that Fornals’ ability to ensure minimal time between his first and second touches ensures he continues to advance possession and maintains his team’s attacking momentum, which can prove particularly valuable during moments of transition. Perhaps similarly to David Silva, by playing off of so few touches he can capitalise on his teammates’ movements even against an organised defensive block, when others would remain in possession for too long and miss the chance to do so.

Also as can Silva, Fornals retains that ability to play off of two touches and execute composed forward passes when receiving balls to his chest or thigh. Regardless of whether playing towards the left or centrally, he proves consistently capable of linking with those making forward runs and penetrating beyond the last line of defence. His left foot is reliable when he is shooting at or running towards goal, but if advancing play, contributing to building attacks and delivering forward passes he is significantly more potent with his right. 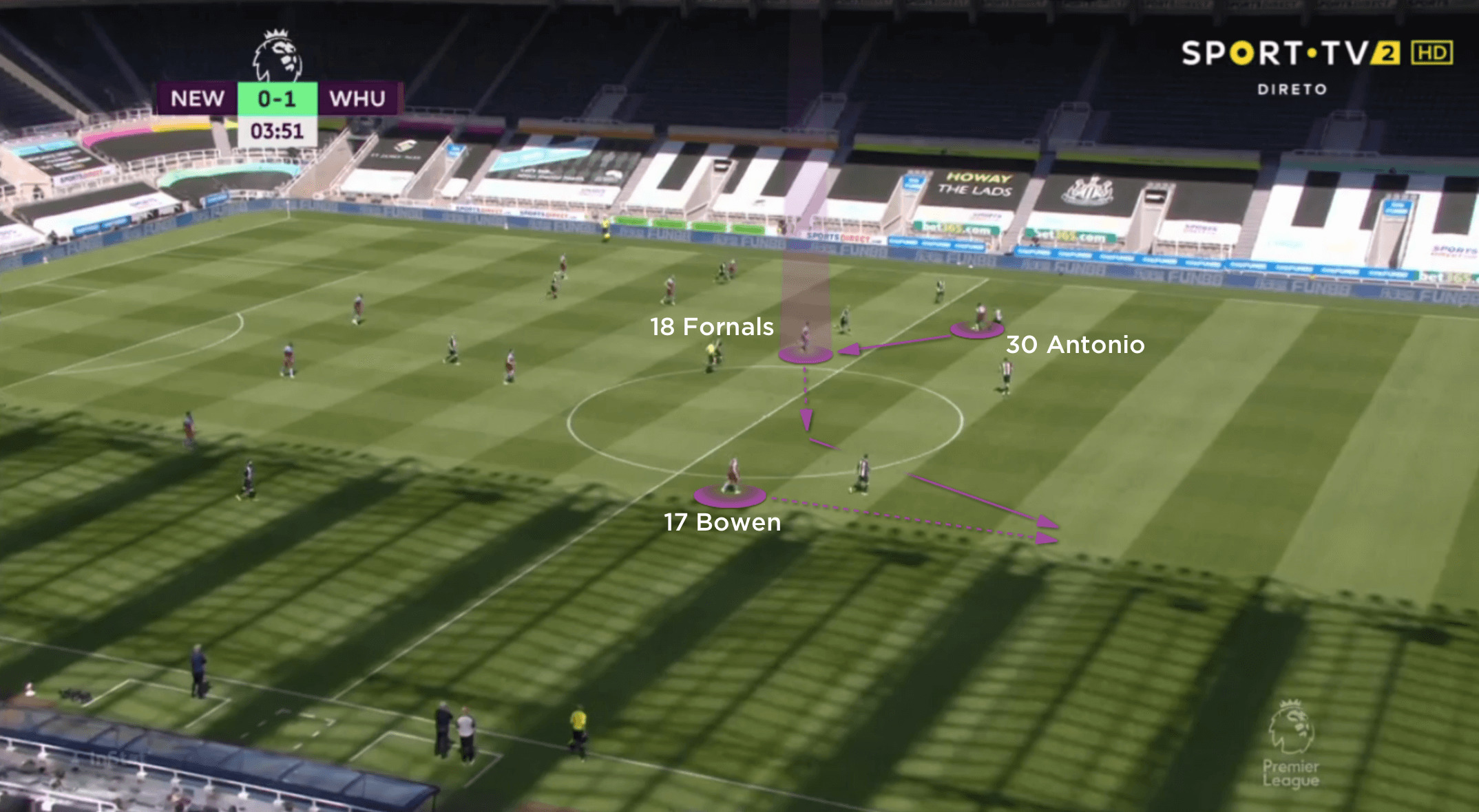 Role at West Ham
Under Manuel Pellegrini, Fornals featured towards both the left and right, and through the middle, of West Ham’s 4-2-3-1. Pellegrini’s successor David Moyes has since selected him with far more consistency towards the left of the different shapes with which he has experimented. The arrival of Jarrod Bowen, shortly after Moyes’ return, has contributed to that. Bowen’s selection towards the right also complements Fornals’ abilities (below), because his instinct to make runs in behind gives the Spaniard a regular target.

Regardless of whether Sébastian Haller or Michail Antonio start, both represent powerful strikers capable of securing and holding up possession, giving Fornals the freedom to drift into different areas of the pitch to link with other teammates contributing to their attack. They, similarly, have the potential to stretch defences, creating increased spaces for Fornals, Bowen and others to attack into, movements Moyes – who has long favoured inside-moving wingers – also encourages. 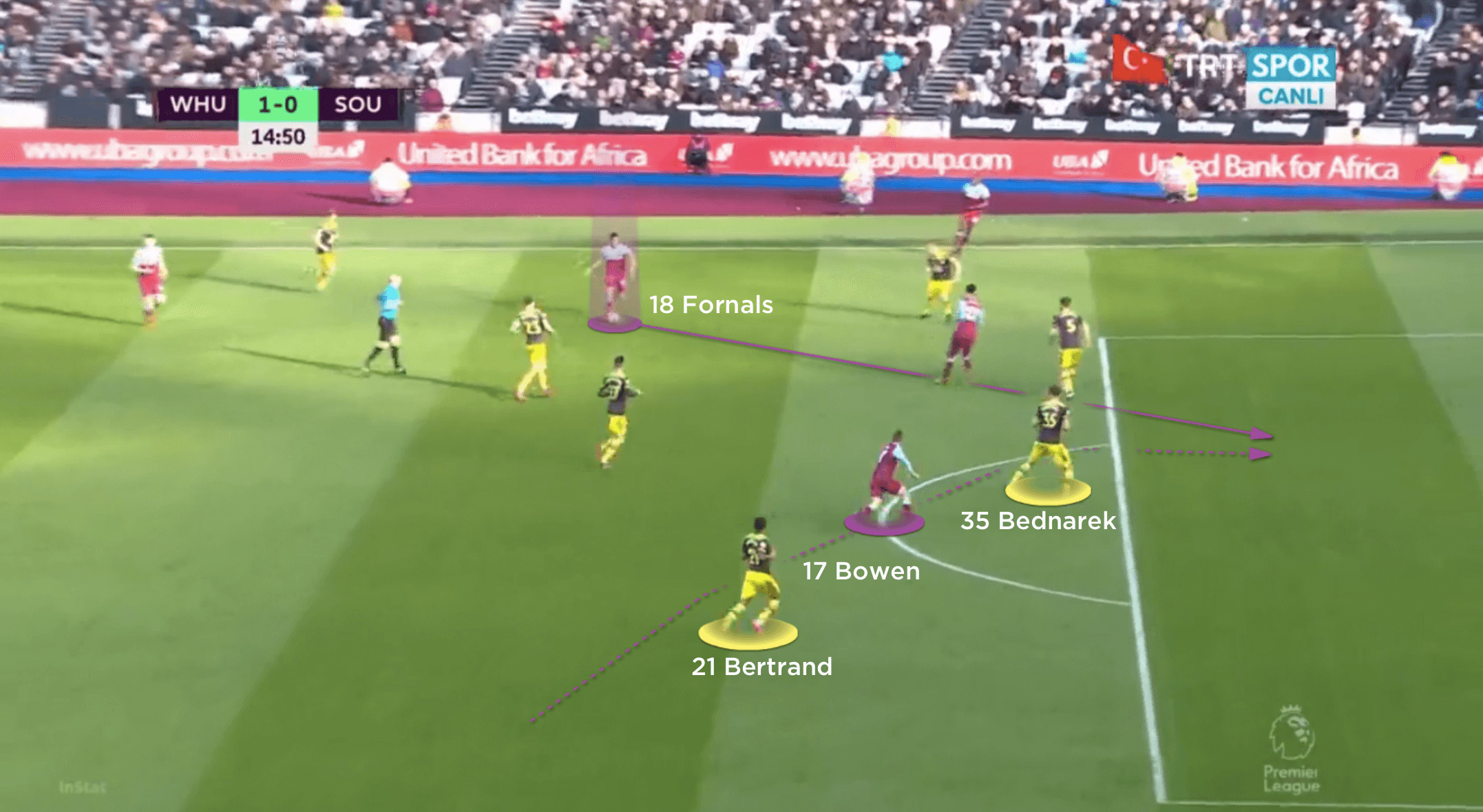 On the occasions Antonio has operated as a number 10 behind Haller, and with Tomas Soucek offering runs from central midfield, Fornals’ desire to play with few touches is crucial to their attacking potential. Direct balls into Antonio or Haller quickly bring Fornals into play, allowing him to remain influential if opposing midfields attempt to prevent balls into feet. The runs Soucek makes also takes defenders away from him, giving him increased spaces and encouraging him to move infield or to attack forwards (below).

Soucek’s aerial threat also gives Fornals an additional target for aerial deliveries, or forces those defending to retreat into the penalty area, potentially giving him space to shoot from outside of it – he poses a reasonable threat on goal – whether independently or having pursued a cut-back. If crossing into the area, Fornals favours cutting inside on to his right foot and attempting an inswinging delivery from a more narrow position, supported as he often is by Aaron Cresswell or Arthur Masuaku from left-back, and Declan Rice from the base of West Ham’s midfield. 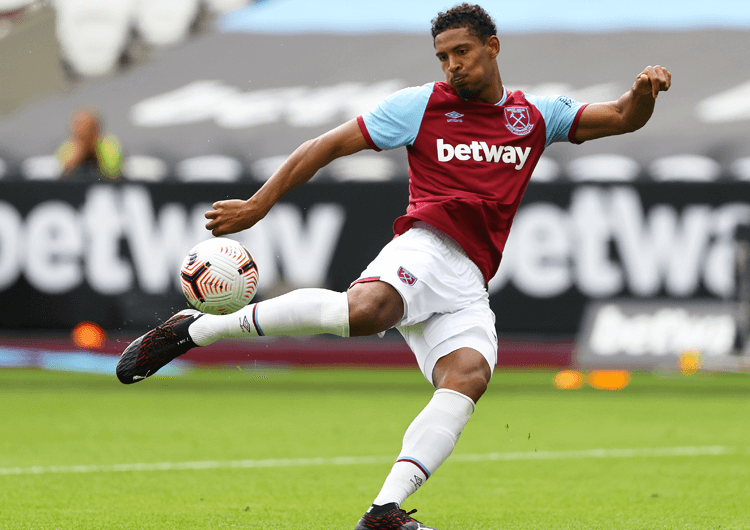 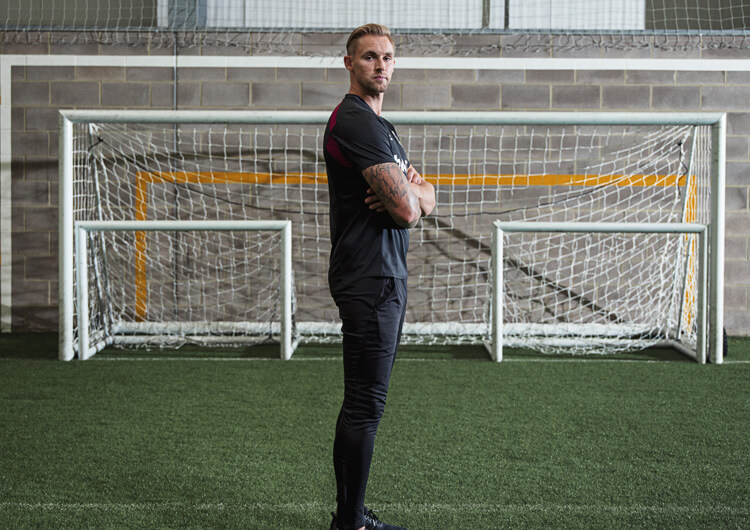 West Ham favourite Jack Collison discusses the influence that Gianfranco Zola, Eddie Howe and Sam Allardyce have had on his approach to coaching 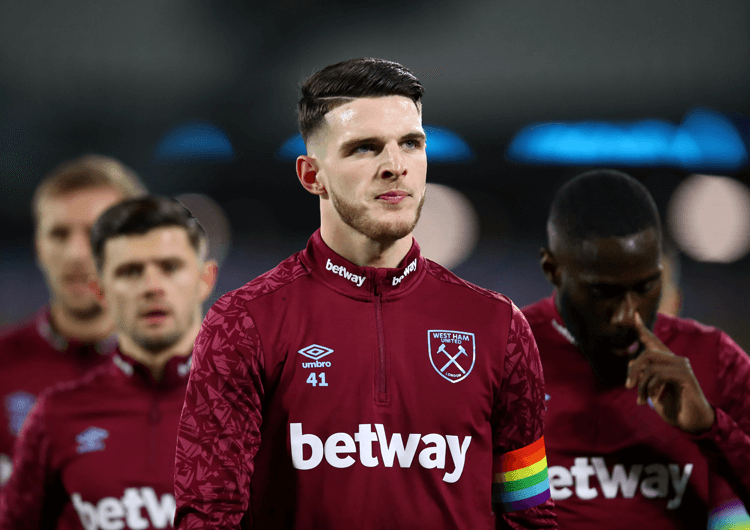 England international Declan Rice has been particularly instrumental in West Ham’s improvement under David Moyes. Our professionals assess how