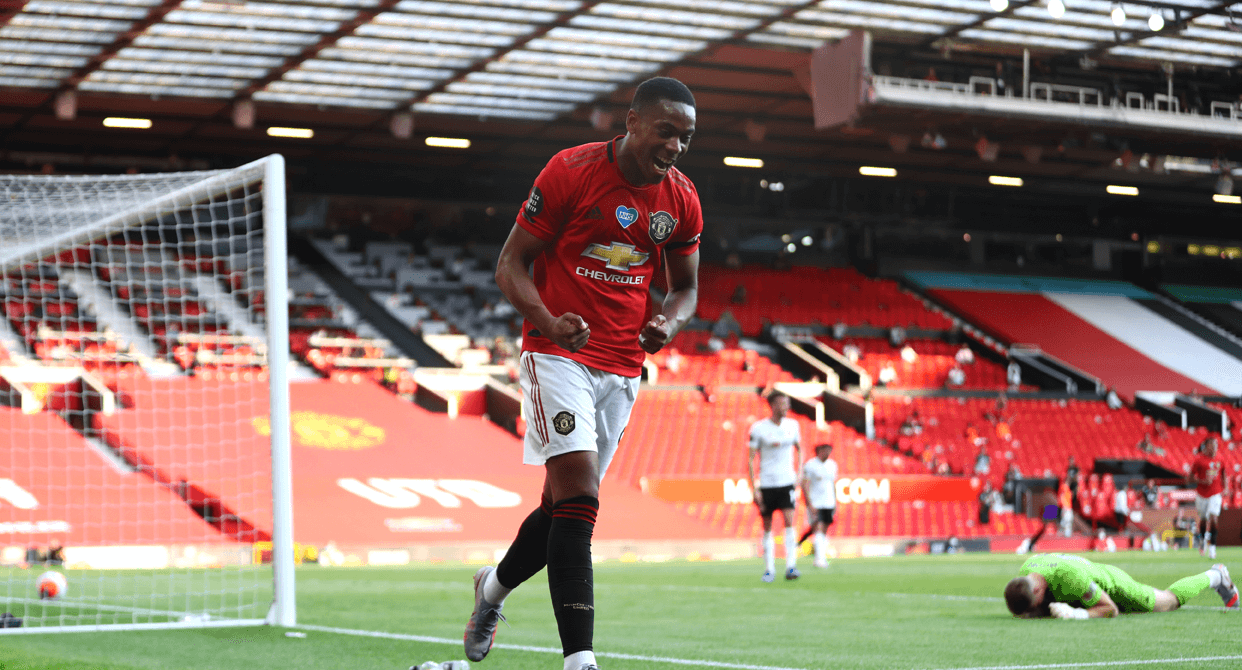 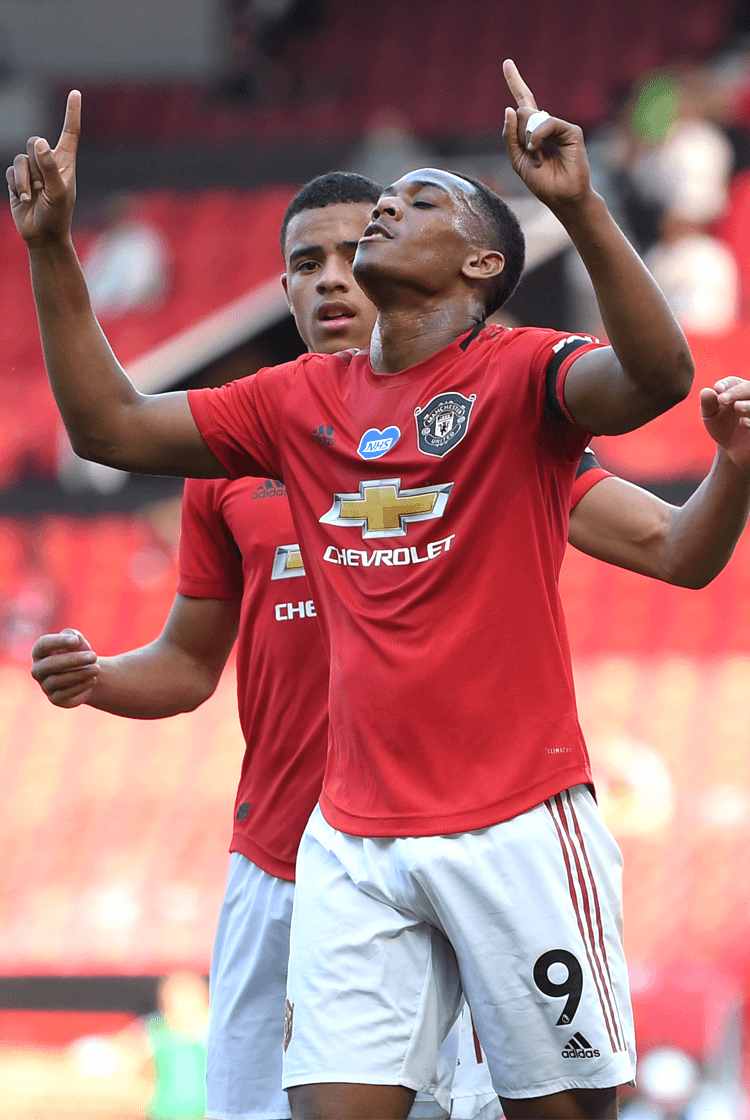 Anthony Martial recorded Manchester United's first hat-trick in the Premier League for seven years when they eased to victory over Sheffield United. Robin van Persie's, when United were securing their last title in the final days of Sir Alex Ferguson's glorious reign as manager, was the last, and even if that comparison serves as a reminder of their decline since then, the latest performance from a youthful team gave them cause to be optimistic about their future. In seven league fixtures since Bruno Fernandes' arrival from Sporting Lisbon, Martial has scored six goals, keeping them in contention for qualification for next season's Champions League. Sheffield United were consistently impressive until March, but since the resumption of the Premier League they have recorded only one point from three matches and are yet to score. "I am very happy for Anthony," said United's manager Ole Gunnar Solskjaer, who also knows how it feels to score a hat-trick for the club. "We have worked with him getting in the box. The first goal, that's a vital goal with they way he turned and got himself into a position to score from Marcus' (Rashford's) cross." 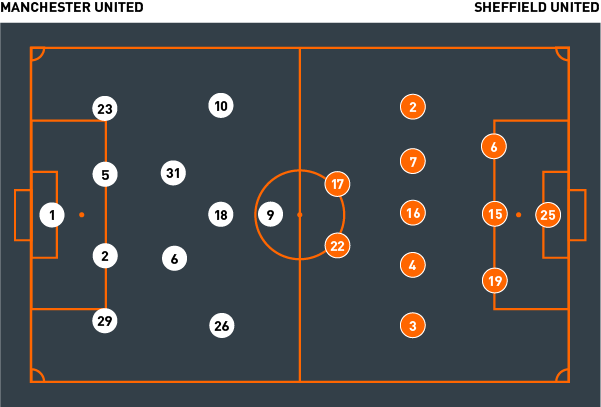 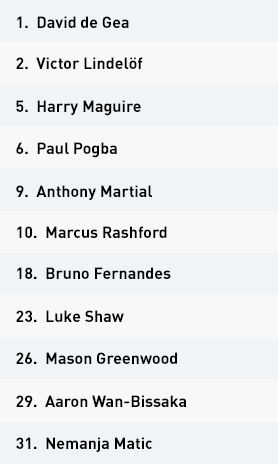 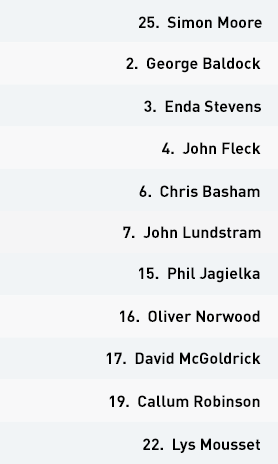 Ole Gunnar Solskjaer set Manchester United up in a 4-2-3-1 formation when they were in possession. Nemanja Matic and Paul Pogba featured as the double pivot at the base of their midfield, against opponents who defended with a 5-3-2.

The hosts dominated possession as they searched for a way through their opponents’ mid-block. Sheffield United’s strikers, David McGoldrick and Lys Mousset, closed down Pogba and Matic to restrict United’s supply into the central areas, where their most creative players were positioned. United responded through those two midfielders taking turns to withdraw into defence, effectively creating a three-on-two or four-on-two against McGoldrick and Mousset, and in doing so consistently bypassed the first line of the visitors' structure.

Those in the half-spaces offered the next passing option for United as they sought to play it out from defence. If John Lundstram advanced to towards Harry Maguire, United could play directly through to Bruno Fernandes or Marcus Rashford; the pass outside to Luke Shaw became an option if George Baldock was the one to move out.

Once possession was in the half-space or a wide area, just inside the attacking half, the hosts used diagonal passes to the feet of a teammate even further forwards. United’s front four remained close together, and used quick combination play to attempt to penetrate beyond the opposing defence. This required intelligent movement. United’s attackers worked in groups of three; one withdrew to towards the ball while the other two ran beyond the visitors' defence, or two withdrew and one made a run in behind. The opposing central defenders frequently followed those moves, and spaces were created as a consequence.


Fernandes, in particular, was excellent at losing his marker after receiving a pass with his back to goal. He often made a small step in one direction to move his opponent before flicking a pass around the corner to a teammate and then making a penetrative run of his own. At other times he quickly turned in-field and switched play to the opposite flank. Sheffield United struggled to contain him.

United moved the ball around at pace in the final third and in doing so opened up small spaces through which they could penetrate, leading to their second and third goals. Shaw and Aaron Wan-Bissaka joined attacks regularly, and made runs beyond wide attackers Rashford and Mason Greenwood; Pogba was also afforded the freedom to make penetrative runs from a deep position. The frequency of these vertical runs and interchanges of position overwhelmed opponents who had two fewer days to recover from their previous fixture than had their opponents.

Solskjaer’s team, sensing that their visitors were struggling with the physical demands involved in attempting to negate them, began to use longer switches of play to further wear them down. They knew that Sheffield United’s defensive line of five was incredibly well organised and that their attackers needed to continue moving, and those switches succeeded. In the second half, the intensity and tempo of both teams dropped considerably, largely because United had close to secured victory. They therefore eased off, and Anthony Martial regardless secured his hat-trick late on.

Sheffield United were organised by their manager Chris Wilder into a 3-5-2 formation during the periods they had possession. David McGoldrick and Lys Moussett formed their front two, against opponents who largely remained in a 4-2-3-1.

The visitors struggled to gain and retain possession, and provided minimal attacking threat. They often played directly from goalkeeper Simon Moore – deputising for the absent Dean Henderson – but struggled to win the second ball when they did so. McGoldrick often withdrew into midfield to increase their numbers there, but they still encountered a three-on-three against Manchester United's.

Even if that led to occasional, improved spells of possession, they continued to struggle to penetrate beyond United's defensive line. Chris Basham, John Lundstram and George Baldock instead combined to create overloads and to advance beyond Luke Shaw before crossing from the right wing; an overlapping run was triggered by a diagonal pass from a central position into a half-space or a wide area. Those attacks only broke down when the hosts' comfortably defended against them from inside the penalty area.


Mason Greenwood, Anthony Martial and Marcus Rashford combined to press Sheffield United's three central defenders, and Greenwood and Rashford also sought to screen passes into the visitors' wing-backs. In the event of a switch of play, one of the visitors' full-backs would advance to the relevant wing-back, because of their distance from United's wide attackers.

There were also occasions when United adopted a 4-4-2 mid-block, in which Rashford and Greenwood withdrew into midfield, and Bruno Fernandes advanced to alongside Anthony Martial. They ultimately did so because their control of the game was such that they needn't press higher, and expend unnecessary energy in the hot conditions.