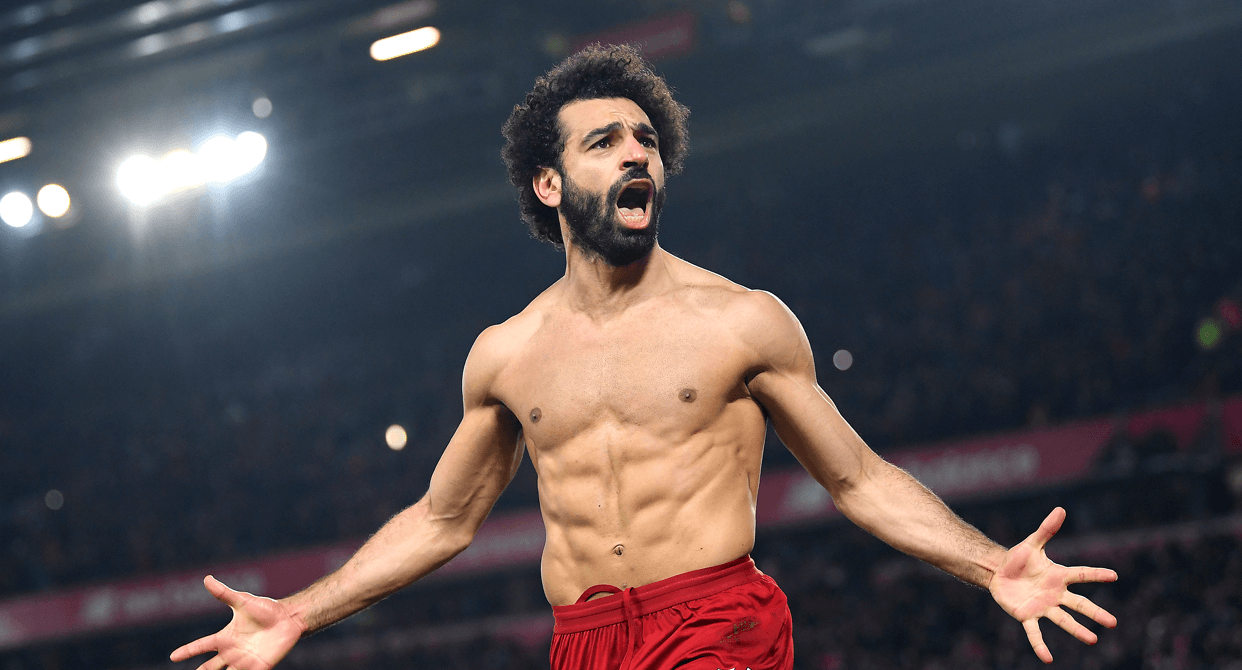 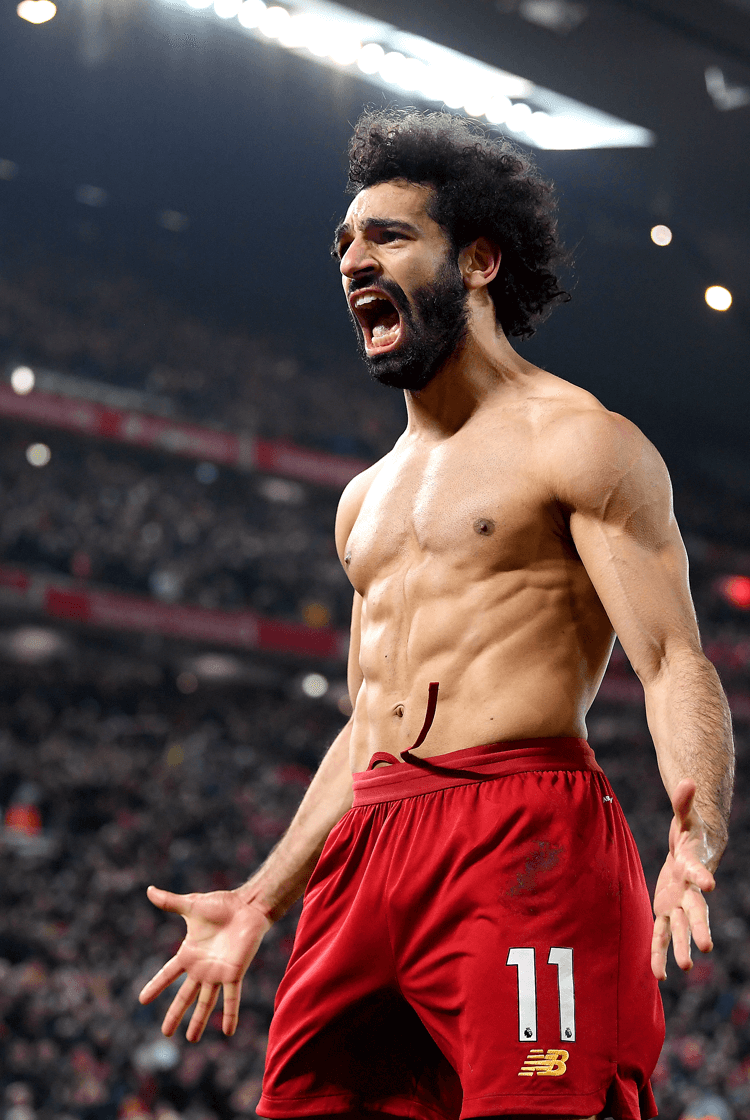 Liverpool extended their lead at the top of the Premier League to 16 points as they took another significant step towards their first league title in 30 years. They outclassed Manchester United, the only team so far to deny them victory in 2019/20's competition, scoring in the first half through Virgil van Dijk's header, and in the third minute of second half stoppage-time when Mo Salah clinically finished beyond David de Gea. The Video Assistant Referee had also contributed to Roberto Firmino and Georginio Wijnaldum seeing fine efforts ruled out. "It's a big relief," said their manager Jürgen Klopp. "I was really happy with 85-90 per cent of the game, we were brilliant. We dominated the game, especially in the first half. The energy they put on the pitch was incredible." His opposite number, Ole Gunnar Solskjaer, said: "I felt in the second half we performed really well against a good team and at a difficult place. We didn't have quality with our finishing or last pass. Fred was absolutely top, and David de Gea. As a team we worked together as a unit." 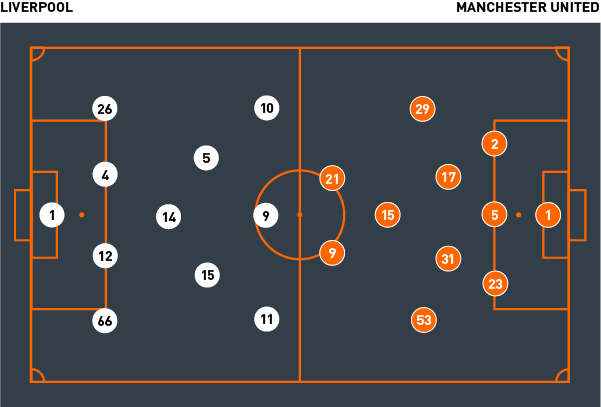 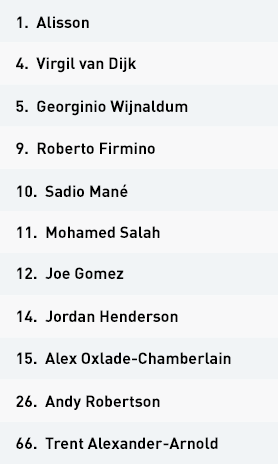 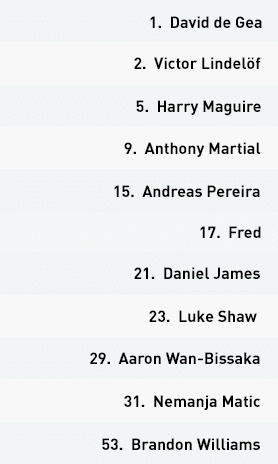 Liverpool retained Jürgen Klopp's favoured 4-3-3 formation, on this occasion featuring Jordan Henderson as their deepest-lying midfielder, and Alex Oxlade-Chamberlain in front of him alongside Georginio Wijnaldum. In their attempts to contain their rivals and the Premier League leaders, Manchester United adopted a 5-2-3 on the occasions that they were out of possession.

Liverpool’s versatility was their greatest strength during those periods. Where many teams have few favoured approaches, Klopp's had many. United prioritised pressing central defenders Joe Gomez and Virgil van Dijk to restrict their variety of pass, and alongside Andreas Pereira – who withdrew to towards Henderson – the double pivot of Fred and Nemanja Matic were organised into a three-on-three with Liverpool's midfield.

United's wing-backs, Aaron Wan-Bissaka and Brandon Williams, provided an additional number by tucking in alongside their three central defenders, against the hosts' potent front three, but Liverpool adjusted through the positioning of their full-backs Trent Alexander-Arnold and Andy Robertson. If they remained in deeper territory, when defending against them Wan-Bissaka and Williams had either greater ground to cover, or risked creating the spaces that Sadio Mané and Mo Salah so often relish.


The off-the-ball movement demonstrated by Klopp's team particularly impressed. Vertical rotations between Roberto Firmino and a midfielder, and between their full-backs and wide forwards, tested United. They also offered support behind the ball, and when competing for second balls after longer passes from Alisson or Van Dijk.

Through Henderson or Wijnaldum withdrawing into defence the commitment of United's midfielders to their three-on-three approach was tested, and essentially often freed up a full-back to advance and in turn to rotate with the relevant wide forward, and therefore to threaten from out wide. Only poor deliveries into the penalty area, amid the numbers United offered there, prevented them from scoring from the attacks that followed.

Liverpool once again also posed a significant threat during transitions. The defensive responsibilities given to Salah and Mané often meant that Firmino was alone in remaining ahead of the ball and able to offer an outlet, so the athleticism of Oxlade-Chamberlain and Wijnaldum, who carried possession at speed, led those attacks while their teammates supported them.

Manchester United were organised by their manager Ole Gunnar Solskjaer into a 3-4-1-2 formation while they had possession, similarly to when they drew 1-1 in the corresponding fixture earlier this season at Old Trafford. Luke Shaw was selected in an unfamiliar role on the left of a back three, to free up Brandon Williams to operate as their left wing-back.

They were confronted by hosts who largely remained in a 4-3-3, and they struggled to build possession during the first half against Liverpool's organisation, and their desire to deny them overloads. United's back three was pressed by Liverpool's front three – Mo Salah and Sadio Mané prioritised the outside shoulders of Shaw and Victor Lindelöf, to discourage them from passing to the relevant wing-back – and the double pivot formed by Nemanja Matic and Fred was also deprived space to receive and play, by Liverpool's midfield.

When this contributed to clipped passes over longer distances, Joe Gomez and Virgil van Dijk demonstrated the necessary aerial strength to negate any potential attacking threats. Amid Andy Robertson and Trent Alexander-Arnold being instructed to press United's wing-backs – Aaron Wan-Bissaka was the other – Daniel James was instructed to operate in half-spaces to create two-on-ones against them. Jordan Henderson responded by, from the base of Liverpool's midfield, moving to assist his teammates when necessary.

United's structure encouraged switches of play and overloads in wide positions, through their front three and wing-backs combining against Liverpool's back four, but the desire of Mané and Salah to track back meant the hosts occasionally adopting a 4-5-1 while they defended, negating many of those overloads. On the occasions those overloads existed United then lacked the quality of execution and decision-making to capitalise, and to score. Individuals also withdrew towards possession, but they did so in isolation and without the counter-movements from teammates that could have exploited the spaces that had been created.

Liverpool intensified their press during the second half, suffocating United inside their defensive half – where they were attempting to play short – and contributing to a spell in which they rarely progressed beyond the half-way line and the hosts wasted multiple goalscoring chances. United's movement regardless gradually improved, through Williams and Anthony Martial creating spaces and opportunities towards the left wing.

The counter-press demanded by Jürgen Klopp and carried out by his team regardless continued to largely deny Solskjaer's. They advanced towards possession the instant it was lost, to immediately apply pressure, and therefore made multiple regains and forced long, inaccurate passes from their visitors.