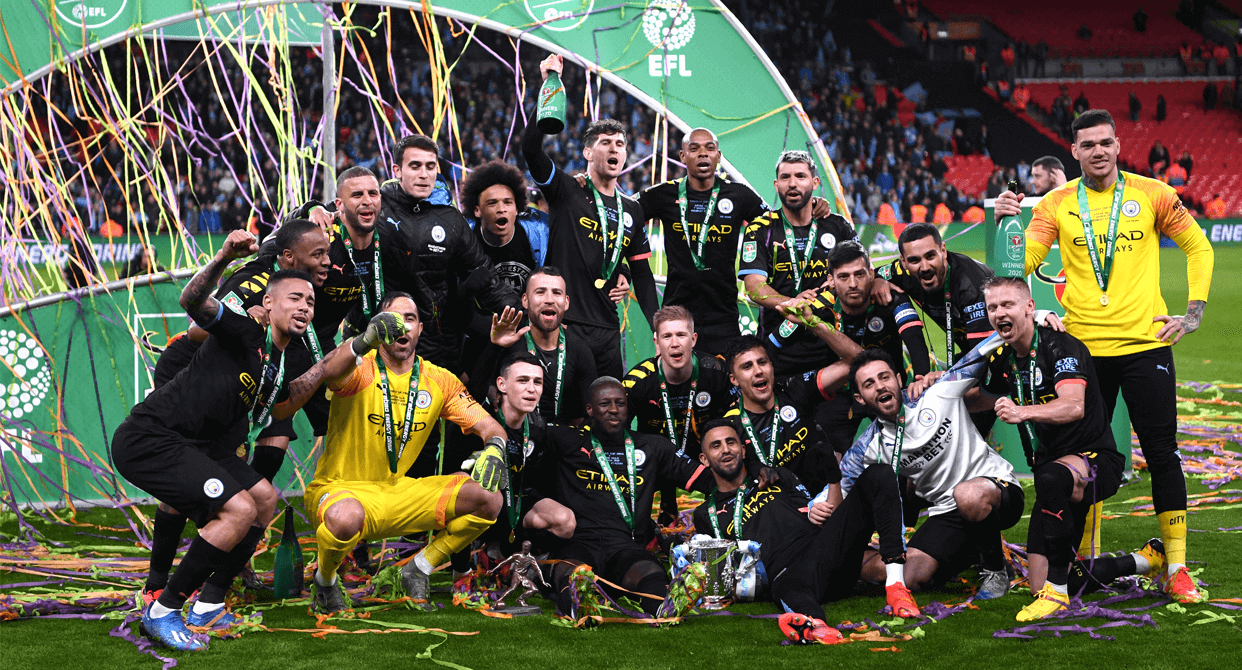 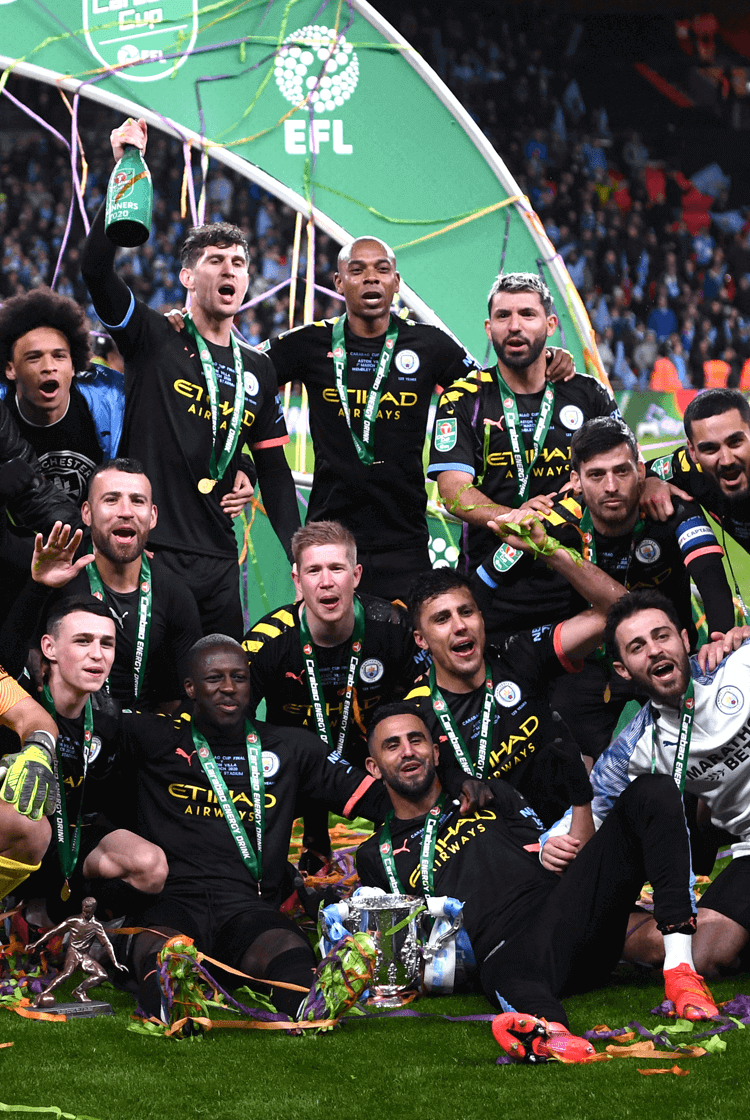 Manchester City won the League Cup for a third successive season when they beat Aston Villa at Wembley Stadium. Pep Guardiola's side were the favourites going in to the game and raced into a predictable two-goal lead inside the first half through Sergio Agüero and Rodri, but Villa responded on the stroke of half-time through January signing Mbwana Samatta. City thereafter resisted their attempts to score a second, even amid Dean Smith's attacking substitutions. "Three times in a row is a big success; it's the consistency, incredible," said Guardiola after securing his eighth trophy since his appointment as City's manager. "It was awesome. They had two clear chances in the first minutes but we played really well, especially in the second half. We've won a lot. Every game we play we try to win; every competition we try to win; and three times in a row, being here and winning is great." Only Liverpool had previously won three successive League Cups; their total of eight also makes them the only team to have won more than City's seven. Impressively, Guardiola's three League Cup triumphs means that in his fourth season in English football he is already within one of equalling the record of four, jointly held by Sir Alex Ferguson, José Mourinho and Brian Clough. 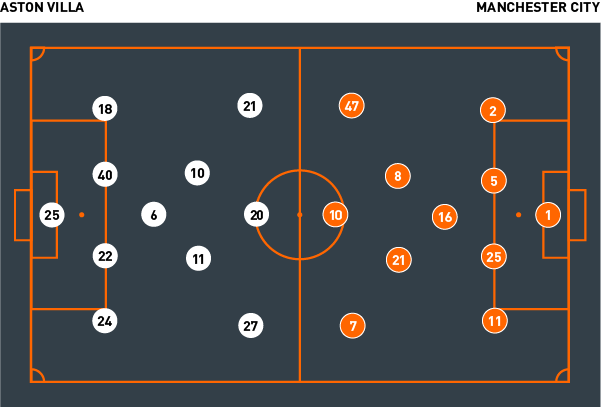 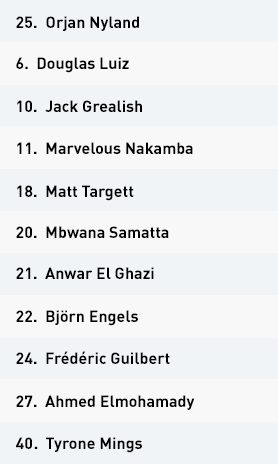 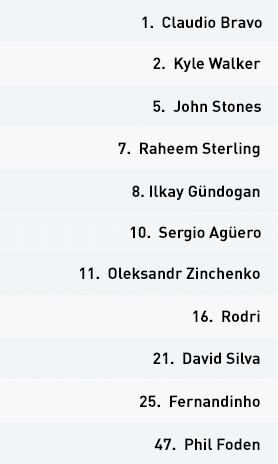 Aston Villa were organised by their manager Dean Smith into a 4-3-3 formation, built on the midfield three of Marvelous Nakamba, Douglas Luiz and Jack Grealish. They were confronted with the 4-1-4-1 Manchester City largely defended with, when Rodri featured between defence and midfield, but also occasionally encountered a 4-4-2 when David Silva advanced to play alongside Sergio Agüero.

They made a promising and aggressive start, when they attempted to maintain a quick tempo and in City’s half to create opportunities to cross, towards central attacker Mbwana Samatta. It was that approach that brought their only goal at 2-0 down, when he positioned himself between Fernandinho and Oleksandr Zinchenko to finish Ahmed El Ghazi’s delivery, following John Stones’ slip.

By then they were already struggling to exert an influence, and to secure possession for lengthy spells; City were also playing with intensity when they were without possession. Pep Guardiola’s team often prioritised moving towards the ball-carrier and applying pressure, to force their opponents into making rushed decisions, and therefore potentially mistakes that would lead to turnovers.


A similar intensity was also applied during moments of transition, when City were determined to prevent Villa from building a sense of momentum, and to attack on the counter. If there was a risk of their counter-press being evaded, they also committed tactical fouls.

As play progressed Villa became increasingly direct, by playing to towards Samatta, but even on the occasions he succeeded in winning possession, City continued to collect second balls – partly because of a lack of support around him. When Conor Hourihane and Trezeguet were introduced, Jack Grealish adopted a wider, more attacking position from where he could receive possession closer to goal, but the threat he posed was largely negated.

Smith also encouraged his full-backs and midfielders to advance in their pursuit of an equalising goal. The increased numbers they therefore offered further forwards contributed to them winning more second balls and continuing attacks from more advanced positions; they also invited contact, to win free-kicks in the attacking half, largely because City’s mixed approach of zonal and man-marking did not consistently convince.

Manchester City adopted Pep Guardiola’s favoured 4-3-3 formation, led by the less-familiar front three of Phil Foden, Sergio Agüero and Raheem Sterling, during the periods they had possession. They attacked a team that defended with a 4-5-1, but only after an opening period in which they struggled to control play as they so often can.

When they became the dominant team they had lengthy periods of good possession, which they used to attempt to advance through Villa’s defensive block, by encouraging their full-backs inside and playing short passes to their feet to force Villa’s midfield into a more compact position, and therefore to create spaces for Foden and Sterling. Through their full-backs being more advanced than their central defenders, City were inviting Villa to reduce the spaces between the relevant individuals, and to move towards possession to limit passing angles.

The spaces that were created out wide became ones from which passes were played beyond Villa’s defence, and therefore led to the creation of goalscoring chances. City’s attackers also sought to occupy Villa’s defence, again to create free numbers in wide positions. Those numerical overloads led to fine chances; Foden’s diagonal runs off of the shoulder of Matt Targett and into spaces where he received possession were a regular threat; it was one such move that contributed to City’s opening goal.

Villa were too often too deep and passive when they were without possession, and Ahmed El Ghazi, Ahmed Elmohamady and Grealish were guilty of losing patience and positional discipline when they advanced to close down their opponents. When they did so City found gaps between the lines, from where their attacking players could receive and turn. By retaining possession through circulating it within defence they also discouraged a potential shift in momentum once they had taken the lead.

It was in the second half when Villa applied a higher line of engagement, to press with increased aggression. Their wide attackers joined central attacker Mbwana Samatta further forwards, and their full-backs also advanced, increasing the speed of the game, ultimately to attempt to force mistakes, but at the risk of creating increased spaces between the lines. Kevin De Bruyne’s introduction as a substitute contributed to City targeting those spaces more consistently; they also accessed the spaces behind Villa’s full-backs, but their cutbacks and low crosses from them were well defended against.

Guardiola’s team, similarly, posed a greater threat during transitions, largely because of the numbers Villa had further forwards, but without offering the necessary execution required to extend their lead. Their second goal, before Villa’s, came from a corner when against Villa’s man-marking structure Rodri freed himself from Frédéric Guilbert, and scored with a header.