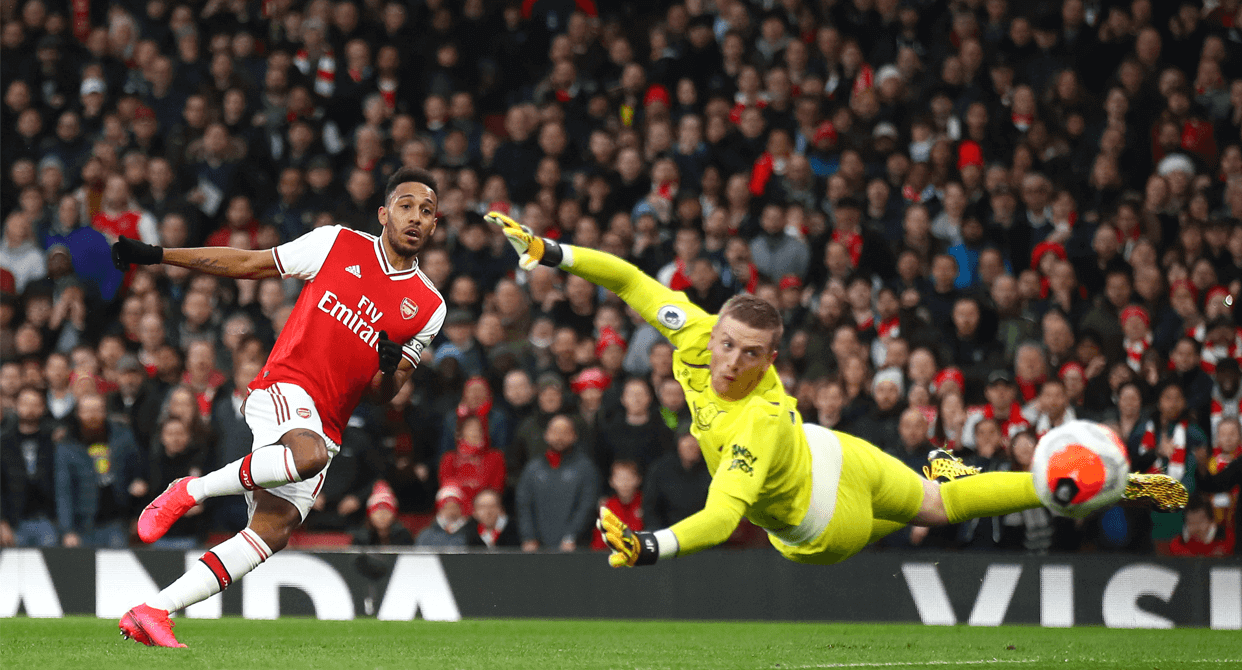 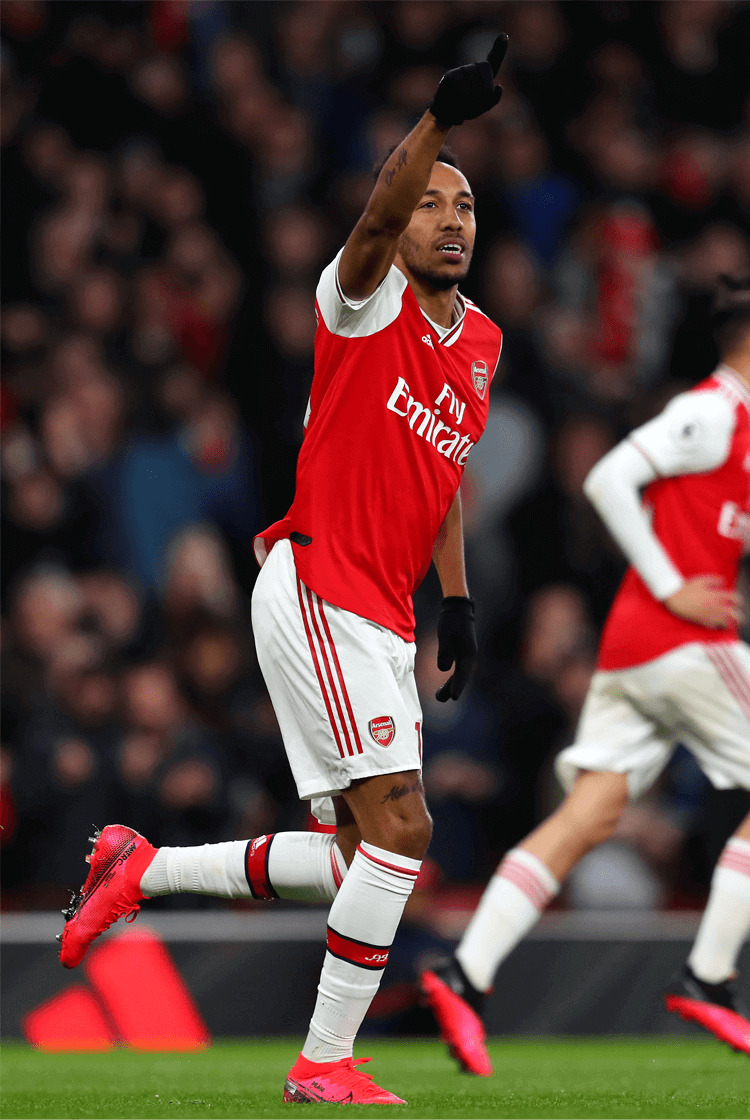 Arsenal extended their unbeaten run to 10 matches with an entertaining 3-2 victory over Everton at the Emirates Stadium thanks to a first league goal of the season for Eddie Nketiah and further finishes for Pierre-Emerick Aubemeyang. Everton had taken the lead inside 60 seconds through the in-form Dominic Calvert-Lewin, but Arsenal recovered to establish the lead, and ultimately to continue the encouraging run of form that has brought them back into contention to qualify for the Champions League . "I am really happy," their manager Mikel Arteta said afterwards. "It was a really difficult game right from the start and I wondered how we were going to react, particularly after the Europa League on Thursday, but the boys have started to play exactly how we want and for 60-65 minutes we were really, really dominant." "The performance was really good offensively but not so good defensively and this is the reason we go home with no points,” said Carlo Ancelotti, appointed Everton's manager when Arteta was arriving at Arsenal. “We had a lot of opportunities and played with intensity in the second half. But we conceded three goals too easily." 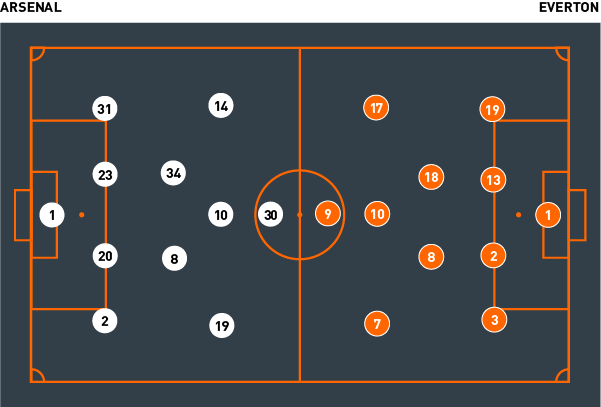 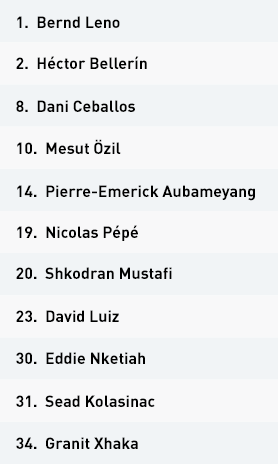 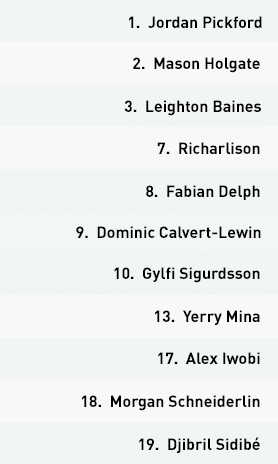 Arsenal set up in a 4-2-3-1 formation while they had possession, with Mikel Arteta again selecting Eddie Nketiah as their central striker. Everton adopted a 4-4-2, built on a narrow midfield four, when they were defending. Arsenal built from from the back and attempted to create overload situations to play through their opponents. Mesut Özil generally sought to move with play and to position himself in line with the relevant opposing central midfielder, essentially creating a two-on-one with a further central midfielder from his team.

Fabian Delph and Morgan Schneiderlin, who made up Everton’s midfield two-strong central midfield, therefore had to choose between advancing to face their opposite numbers, Granit Xhaka and Dani Ceballos, or to remain deeper to attempt to prevent Özil from receiving possession between the lines. This contributed to Xhaka and Ceballos regularly receiving the ball; their positioning allowed for the next progression in Arsenal’s build-up play.

Arsenal positioned one central midfielder between Everton’s forwards and the other wider than central defender David Luiz, creating a four-versus-two overload, inviting progressions outside of them. This was a regular feature throughout the first half, and provided the initial move in the lead up to Arsenal’s first goal, scored by Nketiah.

Everton’s right-sided midfielder, Alex Iwobi, was reluctant to advance to press the central midfielder who had drifted into the full-back position, because doing so would free Sead Kolasinac – later replaced by Bakayo Saka – and Pierre-Emerick Aubameyang to attack right-back Djibril Sidibé. If that reluctance was understandable, it regardless invited Xhaka or Ceballos space to advance, and gave them more time to execute a killer pass.


The key principle during Arsenal's build ups was their pursuit of the free number required to create overloads. The positioning of the relevant full-back, central midfielder, Özil and wide attacker within wide areas and half-spaces created diamonds that would form overloads; those who formed those diamonds played on different vertical lines; one-touch combinations also gave Arsenal the opportunity to advance behind Everton’s defence.

Nketiah regularly withdrew to create an overload in central areas, presenting Everton with a further dilemma. If his movements were neglected then Arsenal would have an even bigger advantage in a central position, but if a central defender followed him a gap would be left in central defence for Aubameyang and Nicolas Pépé to advance into.

Everton largely absorbed their opponents’ attempts to play through them. Despite Arsenal’s three goals, the quality of chance that they created was not particularly high; they were instead reliant on lethal finishing from Nketiah and Aubameyang.

Carlo Ancelotti organised Everton into a 4-2-3-1 formation built on the double pivot formed by Morgan Schneiderlin and Fabian Delph. They were confronted with the 4-4-2 Arsenal used while out of possession.

They started positively, when Dominic Calvert-Lewin gave them the lead in the opening minute, but Arsenal thereafter dominated possession, so they instead attempted to play long passes in behind for Calvert-Lewin and Richarlison to pursue. These passes were often sent towards the channels but, with runs being made away from goal and little support given to their attackers, they ultimately rarely succeeded.

Everton used a similar strategy to Arsenal when they were in position to play out from the back. Delph was used as a false full-back towards the left to overload that area of the pitch. His positioning drew Nicolas Pépé, and freed up Leighton Baines, who should have been more adventurous from left-back by advancing beyond Arsenal’s midfield, but he instead often remained goal-side of Pépé. That that was the case likely owed to concerns about Pépé’s pace during transitions, even if Everton would have posed a greater attacking threat had he advanced.

Delph and Schneiderlin remained in front of central defenders Mason Holgate and Yerry Mina, inviting Baines and Djibril Sidibé to advance while Alex Iwobi, Richarlison and Gylfi Sigurdsson remained in narrower territory. This invited Everton to play between the lines in central areas while also creating spaces in wider positions. The latter was the more regular occurrence, and encouraged Everton to get into crossing positions, but a limited presence in the penalty area meant that Arsenal were generally able to deal with that threat.