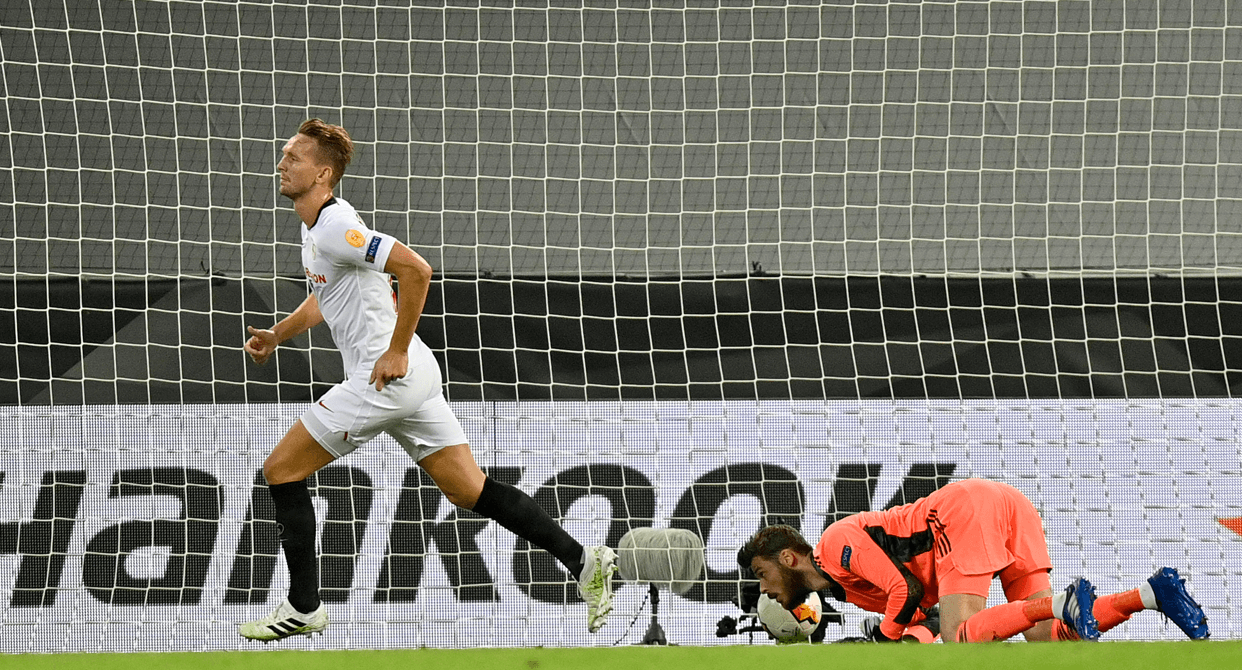 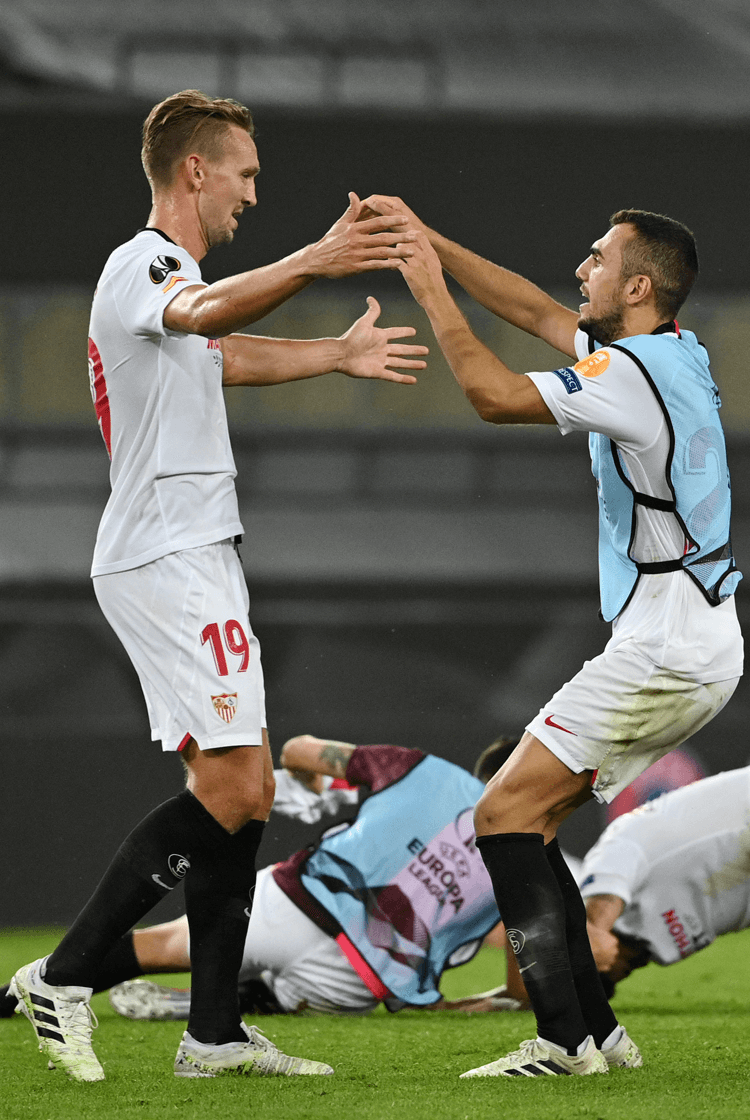 Sevilla recovered from a goal down to beat Manchester United and progress to the Europa League final, where they will encounter either Inter Milan or Shakhtar Donetsk. United were therefore eliminated at the semi-final stage of a competition for the third time in 2019/20, and did so on this occasion when Bruno Fernandes had given them the lead from their 22nd penalty, following Diego Carlos' foul on Marcus Rashford. Former Liverpool forward Suso scored their equalising goal midway through the first half, and substitute Luuk de Jong secured victory with his finish in the 78th minute. "It's very disappointing, hard to take," said United's manager Ole Gunnar Solskjaer. "We played fantastic stuff at times and created chances but couldn't get the goal we deserved. We need to strengthen our squad depth. I cannot say when or if transfers will be done but we are looking at it. We have to be 100 per cent sure." 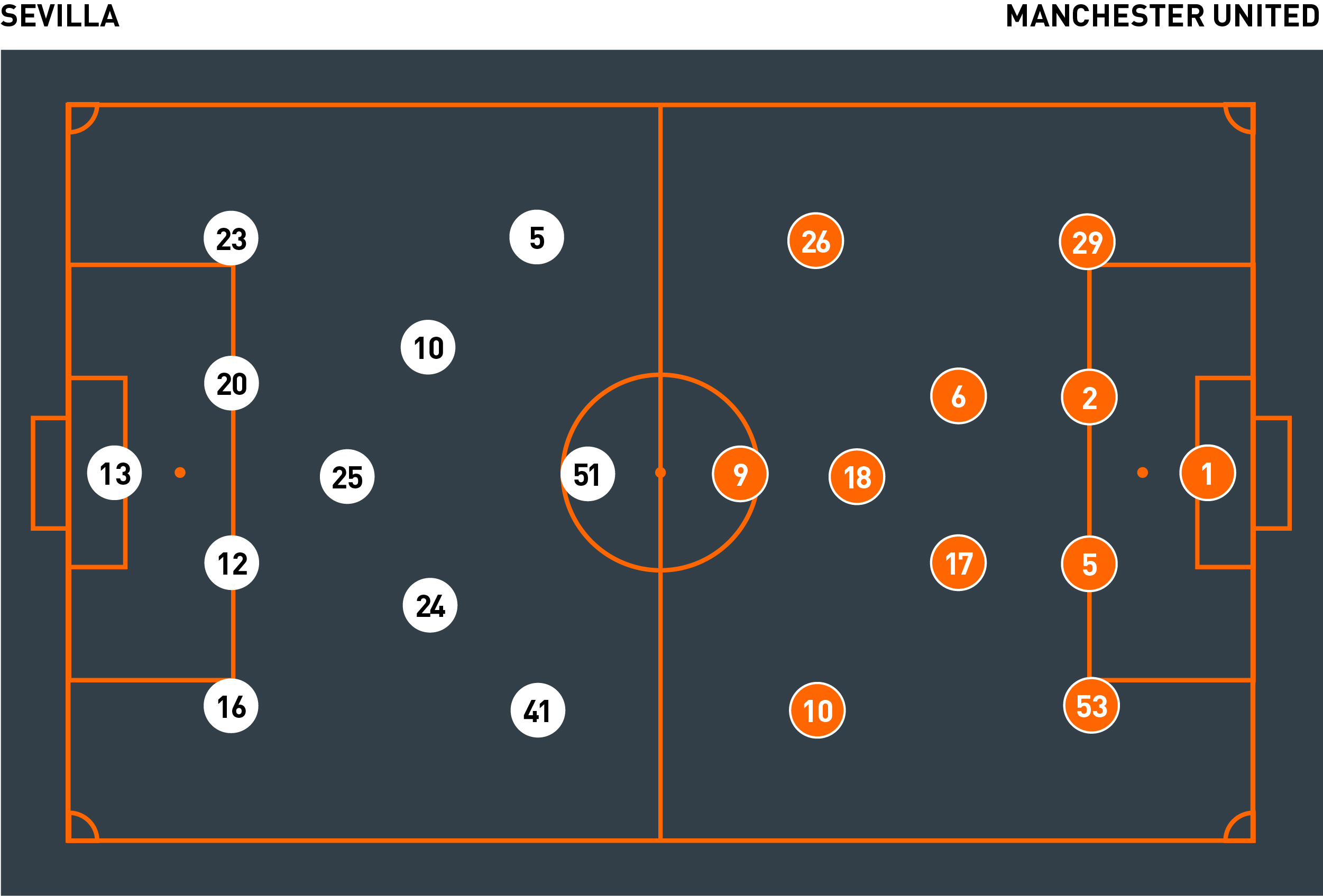 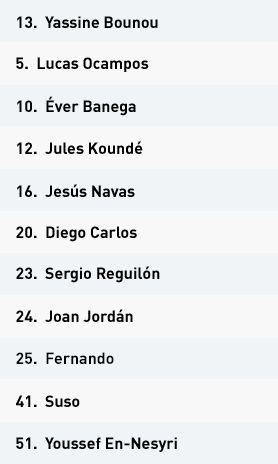 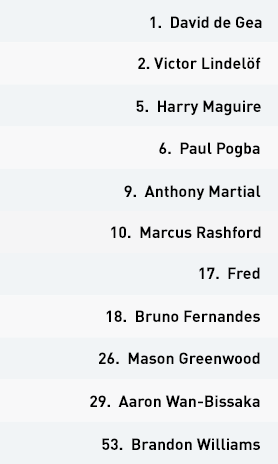 Julen Lopetegui set Sevilla up in a 4-3-3 formation, led by the front three of Suso, Youssef En-Nesyri and Lucas Ocampos. Manchester United, whose attack was led by Anthony Martial, remained in their favoured 4-2-3-1.

That they had a greater share of possession meant that Sevilla's priority was breaking down their opponents, who alternated between applying a high press and defending with a mid-block. Martial led that press by moving to the in-possession central defender and forcing play wider; Bruno Fernandes, Paul Pogba and Fred pressed Sevilla's midfield three, and Mason Greenwood and Marcus Rashford prioritised their full-backs. If they were adopting a mid-block they essentially did so from a 4-4-1-1 or a 4-4-2 that was determined by Fernandes' positioning.

Lopetegui's team favoured building from defence and using rotations in midfield in an attempt to create the spaces they required to advance through. Fernando, operating at the base of their midfield, made runs that drew Fred out of position, and in doing so created a passing lane to Joan Jordán. Ocampos and Suso also moved inside to invite Sergio Reguilón and Jesús Navas to advance from full-back.


They sought to beat the first line of United's structure and to create two-on-ones in wide positions, and often did so through Fernando withdrawing to between their central defenders, ultimately creating a diagonal passing lane to either a full-back or winger. Through that drawing one of United's wide attackers, Sevilla's full-back was free for the desired two-on-one. Éver Banega operating as a false full-back, towards the left, drew Greenwood and worked similarly.

Banega and Fernando working to overload United's attack was complemented by those further forwards withdrawing into midfield to create a further overload against Pogba and Fred, and led to Sevilla penetrating through the first two lines of United's structure with relative ease. It was one such two-on-one that created their equalising goal; their winning goal was also created from a wide position.

United had also appeared vulnerable when defending crosses. When they were, Victor Lindelöf's inability to see both the attacker and ball for as long as possible was as influential as Aaron Wan-Bissaka's lack of defensive awareness.

Manchester United were organised by their manager Ole Gunnar Solskjaer into a 4-2-3-1 formation led by the increasingly familiar front four of Bruno Fernandes, Mason Greenwood, Marcus Rashford and Anthony Martial. They were confronted by opponents who defended with a 4-1-4-1 in which Fernando featured between defence and midfield.

United had to adjust to Sevilla enjoying a greater share of possession, so they therefore sought to launch swift attacks upon regains. Their opponents prioritised pressing David de Gea, Harry Maguire, Victor Lindelöf and their three central midfielders, via their front three, Joan Jordán, Éver Banega and Fernando. If United's full-backs adopted deeper positions, Sevilla's ball-side central midfielder prioritised him instead of the relevant United midfielder who, with the assistance of another midfielder, he attempted to leave inside his cover shadow. If those full-backs advanced they would be pressed by their opposing full-back.

During United's build-up phases, Paul Pogba and Fred largely remained central and did little to draw Sevilla's midfielders out of position, contributing to the defenders behind him either playing into Pogba's feet and relying on him beating his direct opponent, or playing longer passes in behind Sevilla's defence for their attackers to pursue. Julen Lopetegui's team defended well against both, however.


On the occasions United established possession in midfield, Pogba and Fernandes rotated so that the latter could draw Fernando with him and Pogba could advance on the blindside of Banega. They threatened on the counter, when the movements of those in the final third contributed to them creating quality goalscoring chances; only an impressive performance from goalkeeper Yassine Bounou, poor timing when shooting on goal, and poor decision making when releasing the ball – particularly from Greenwood and Rashford – prevented them from scoring. Against Sevilla's admirable desire to defend and block their attempts on goal, and the numbers they defended with, United found it particularly difficult to create chances in the penalty area.

Solskjaer's team was similarly guilty of relying on the individual qualities offered by their attacking players – even their movement required a further dimension. Aaron Wan-Bissaka and Brandon Williams offered overlaps from full-back during the second half, but proved limited in the final third.