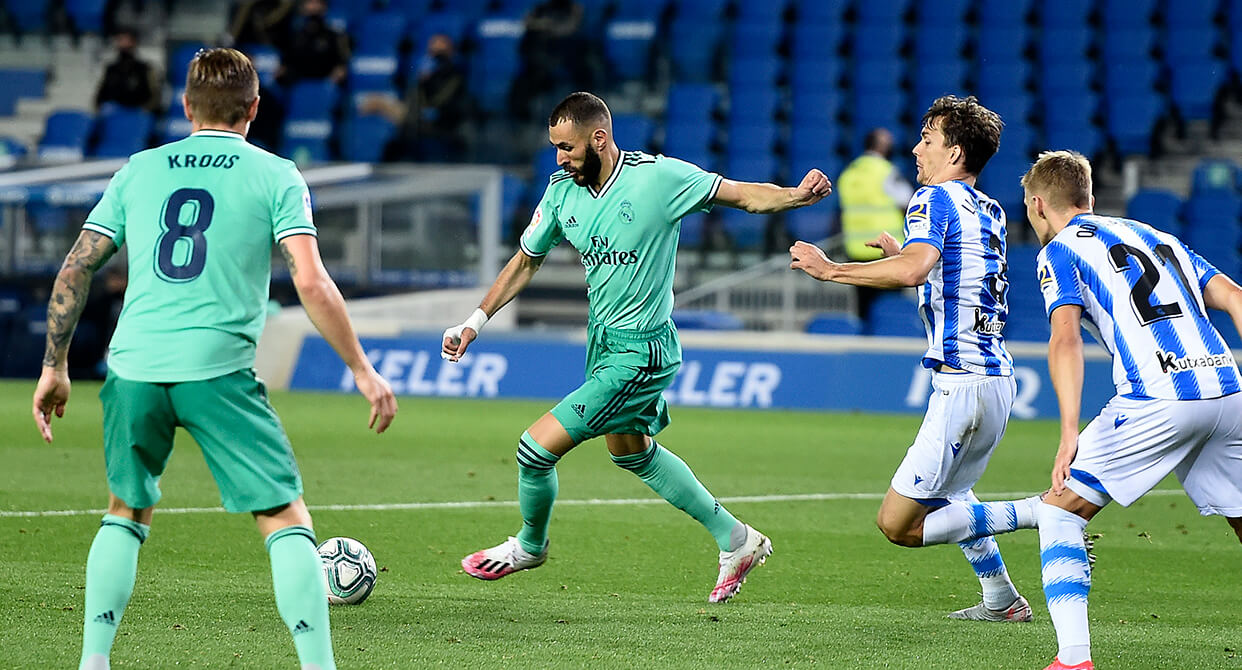 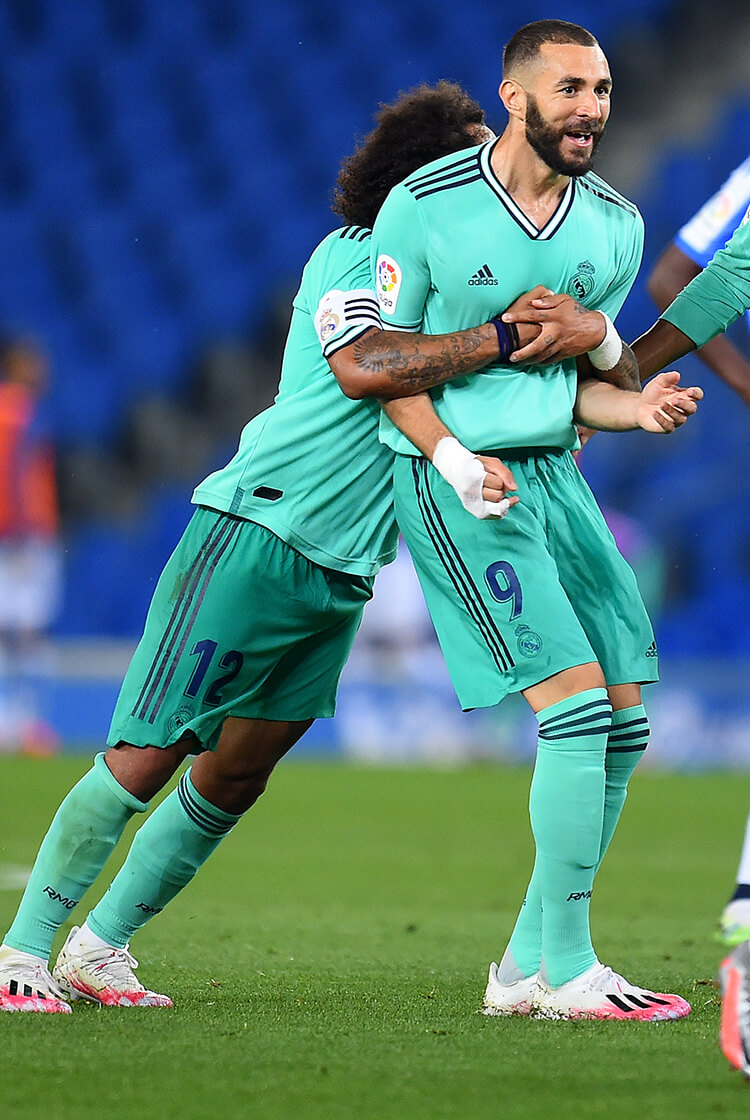 Real Madrid moved top of La Liga with victory at Real Sociedad, after Barcelona dropped points in drawing 0-0 with Sevilla. Barca retain a superior goal difference but, with both teams level on 65 points after 30 league fixtures, Zinedine Zidane's team are in first place owing to their superior head-to-head record. Sergio Ramos gave Real the lead from the penalty spot in the second half of a hard-fought affair, after Vinícius Júnior had been fouled, and Karim Benzema doubled that lead before Mikel Merino's late finish left the visitors under pressure until the final whistle. "The match wasn't easy, we held on from the beginning and we deserved the win," said Zidane. "I don't know what else to say. We deserved to win and that doesn't change the situation. We know that La Liga is going to be decided at the end and we have to continue as we have been." 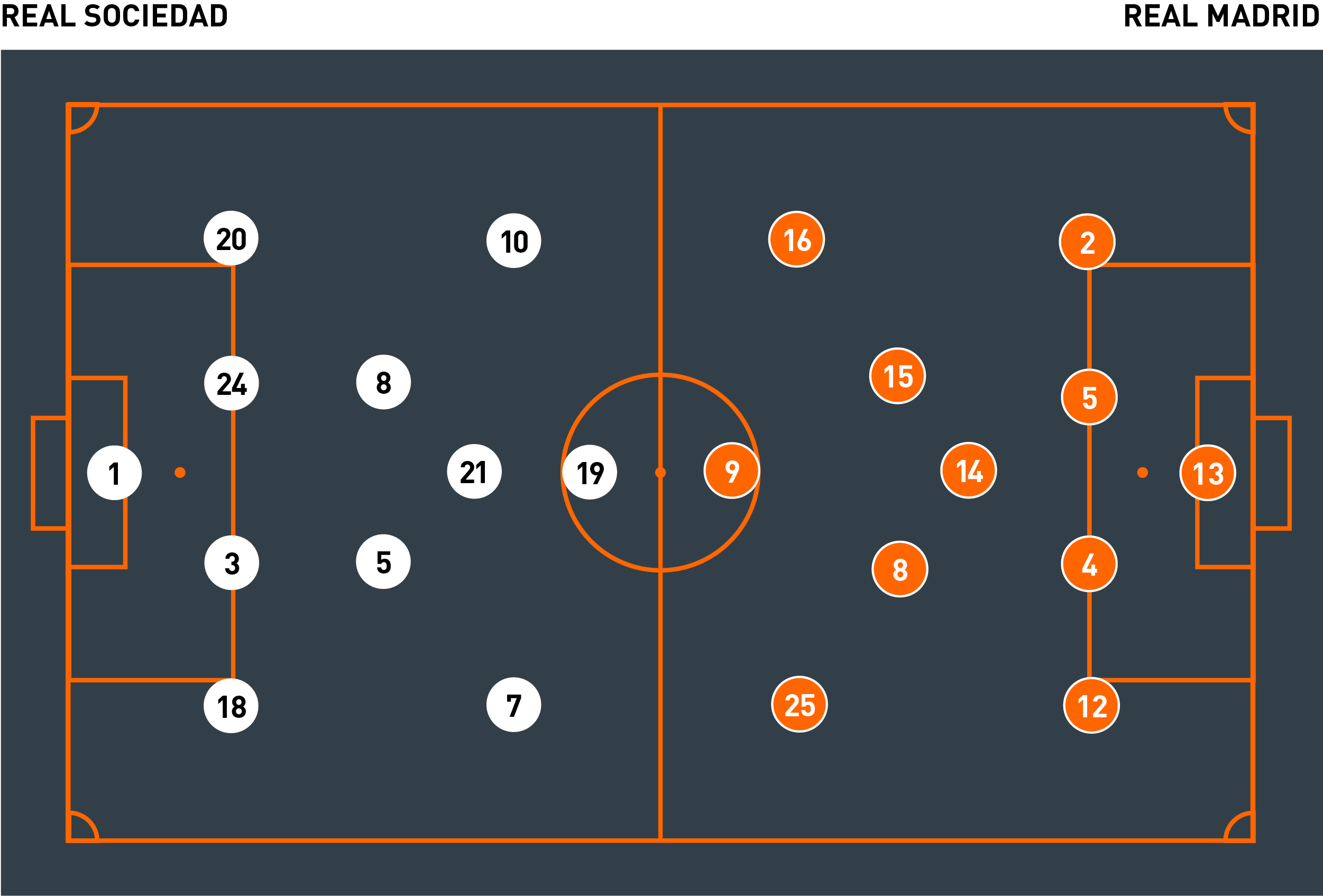 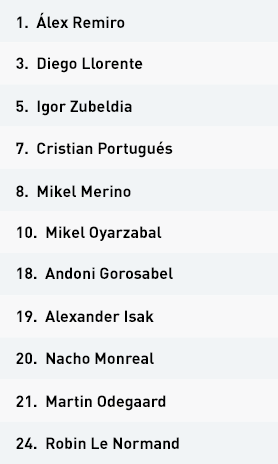 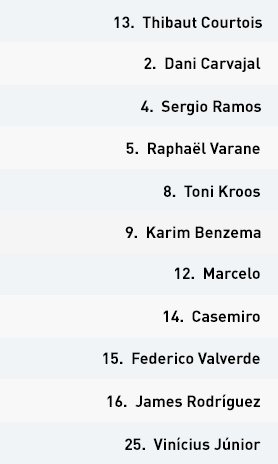 Real Sociedad manager Imanol Alguacil set his side up in a 4-2-3-1 formation, in which Martin Odegaard, Mikel Oyarzabal and Cristian Portugués supported lone striker Alexander Isak, while they had possession. Real Madrid formed a 4-4-2 during those periods, through James Rodríguez and Vinícius Júnior withdrawing into midfield, and Federico Valverde advancing to alongside Karim Benzema.

Sociedad enjoyed the majority of possession and had encouraging spells of dominance during the first half when they attempted to find a way through Real’s block. Real used Benzema and Valverde as a compact pairing, with the intention of directing play into the wider areas where they could use the relevant wide midfielder, full-back and ball-side forward to close the spaces around the in-possession opponent.


Their structure meant that Sociedad favoured advancing in the half-spaces. Their ball-side wide attacker moved into the half-space while their full-back advanced outside of him, and their other full-back tucked in to maintain a sense of balance and to protect against Real’s counter-attacking threat. The use of the wide central defender, pivot, full-back and wide attacker created diamond structures for Sociedad to build with, leading to line-breaking passes and setting to a forward-facing teammate.

Despite Sociedad’s intelligent use of possession in their build-up stages, they recorded only two shots on target, largely because they struggled to manipulate the positioning of Real’s defenders. Their intelligent positioning and combinations were sufficient to advance beyond midfield, but the hosts demonstrated a tendency to only attempt to penetrate centrally after making it beyond that midfield, and they had little success.

Odegaard and substitute Adnan Januzaj drifted horizontally between the lines, operating on the blindside of the midfield in an attempt to draw Real's defenders away from their positions and to create spaces. Real’s defence remained organised throughout, however, and simply passed their opponents on to teammates instead of following their runs. They recognised the right time to advance and the correct time to prevent them from turning, as well as when to hold their positions and when to restrict attempts to play in behind.

Sociedad’s goal eventually came following a switch of play. Diagonal passes forced Real's defensive line to move across the pitch and therefore increased the chances of their opponents getting in behind them. Spaces appeared as they shuffled across, and contributed to Sociedad’s only goal.

Zinedine Zidane organised Real Madrid into a 4-2-3-1 formation during the periods they had possession. Vinícius Júnior, Federico Valverde and James Rodríguez supported Karim Benzema in attack, against opponents defending with a 4-4-2.

Real had significant difficulty in penetrating through Real Sociedad's shape during the first half, and they created very few goalscoring chances. The energy, intensity and organisation of Sociedad's mid-block, with the hosts' attempts to deny their opponents time in posssession, and their line of engagement close to the centre circle, was influential in that outcome. That block would remain compact centrally and invite Real to circulate possession in defence but, crucially, Real's players were closed down quickly by the forwards or wide midfielders in that structure, essentially to restrict their time to make and execute a decision.


From Real’s goal kicks, Sociedad adopted a man-for-man approach and again sought to rush their opponents into making mistakes; they succeeded in forcing several wayward passes into the channels, which they comfortably defended. The visitors began progressing forwards towards the left by the end of the first half following diagonal switches of play to Marcelo and Vinícius. When they found Vinícius’ feet, the young Brazilian was able to run at Sociedad's right-back, Andoni Gorosabel, and to create the space needed to cross. Real also attempted to draw Gorosabel towards the ball to create spaces behind for Vinícius, and eventually won the penalty from which Sergio Ramos scored while doing so.

Real recognised that the wide areas offered the greatest potential to penetrate beyond Sociedad's defence and began creating overloads out wide in an attempt to do so. If this led to more advances beyond Sociedad’s defence, goalscoring chances were still rare because of Sociedad's ability to recover to the point of defending their penalty area. Real were typically threatening on the counter and regularly broke quickly, but the fluidity of movement and crisp passing that was so effective in their recent victory over Valencia continued to elude them.