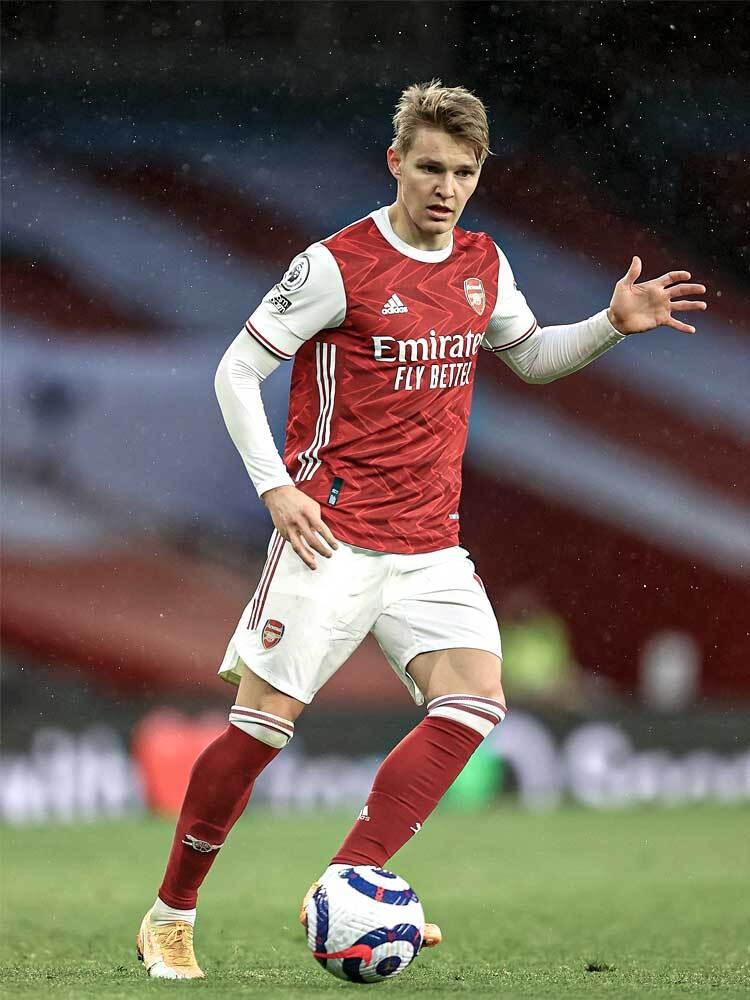 Profile
Norway's Martin Odegaard was only 16 when, in January 2015, he joined then-European champions Real Madrid from Stromgodset for a reported fee of £2.3m. Already drawing comparisons with Lionel Messi at that age, he was still taking a huge risk in moving to the Santiago Bernabéu; many others before him had been tipped for greatness at Real but failed to realise their potential.

By the time of Odegaard’s move to Real, he had become the youngest player to appear and score in the Norwegian Premier League, but his dream move failed to immediately live up to the huge levels of expectation that surrounded it. Then, following a number of temporary moves to Eredivisie sides, he impressed on loan at Real Sociedad in 2019/20 but, once again after returning to Real, he struggled for regular first-team football under Zinedine Zidane. It was for that reason that he looked for another loan move away from the Bernabéu; this time to Arsenal, where he has found a manager who in believes in him in Mikel Arteta.

“He always wants the ball and he commands our pressing,” says Arteta. “He’s been really influential. I think we’ve all been a bit surprised because he looks really shy and humble, but when he steps on that pitch he’s a real character.”

Tactical analysis
The most impressive aspect of Odegaard’s game is how forward-thinking he is when in possession. He takes every possible opportunity to attempt to advance play by breaking lines with incisive passing, and so he regularly cuts opponents out of the game. On top of that, he also regularly gives his teammate on the receiving end of his pass a ball that they will have a good chance of controlling and using positively.

Similarly obvious is his intelligence, and in particular his understanding of how to access his teammates in more advanced positions. He disguises and times the release of his passes so well that his teammates will adopt dangerous positions between the lines or look to run in behind, secure in the knowledge that Odegaard has the ability to find them.

His constant movement across the attacking third maintains the energy and intensity of his game and keeps up the momentum of his team’s attacks. He always follows up a pass with a movement to receive again or to take an opponent away from the ball. He recognises when to withdraw after a pass – in preparation for it to be laid back to him – and when to continue running forwards in the hope of receiving a return pass beyond his direct opponent (below).

If forward passes aren’t available, he is happy remain in possession and attempt to advance through tight spaces through his dribbling. Even though he is not particularly fast, his balance, agility, low centre of gravity and excellent close control mean he is able to evade pressure consistently. His technique in jinking past challenges is the main reason he was  compared to Messi at an early age – though he obviously is far less effective than the Argentine.

He is too left-footed in all that he does, and that restricts him somewhat in his dribbling, when his body shape often indicates an intention to move on to his left foot when there is more space to his right (below). Were he also able to dribble to his right more confidently, he would be far less predictable.

This is particularly problematic when he is on the left flank. He doesn’t have the pace to take an opponent on around the outside – and getting into a position to cross from the left isn’t part of his game – and he is not very effective moving into the left half-space from the touchline, where an ability to pass with his right would be beneficial. This can mean he will too readily look back for a supporting teammate to recycle possession through, allowing the opposition to reset when a progressive pass or dribble would have been best.

Role at Arsenal
While on loan at Vitesse Arnhem in 2018/19, Odegaard played on the right side of midfield in a 4-3-3, 4-2-3-1 or 4-4-2, while at Real Sociedad the following season he was given a more central role as an attacking midfielder or a secondary forward. At Arsenal, meanwhile, Odegaard has played almost exclusively in the number 10 position in Arteta’s 4-2-3-1.

He likes to move from an advanced position to the right of centre towards the ball to receive vertical passes between the lines, taking his first touch inside, on to his left foot. However, it is more common for Arsenal that Odegaard will get on the ball in a deeper position – in front of the opposition’s midfield. From here, he looks to drive forwards with the ball with the intention of drawing an opponent towards him and slipping a through ball in behind for one of the attackers to chase (below).

He has exceptional ability in these situations and can spot a pass that few others would, and although he sometimes attempts through balls that are too ambitious and so fail to find a teammate, he tries so often that he inevitably produces the odd moment of real quality. Pierre-Emerick Aubameyang, Nicolas Pépé and Bukayo Saka are among those to have benefitted from Odegaard’s passing ability, and they know to set off on a run in behind when the midfielder is on the ball and dribbling diagonally towards goal.

Given the freedom he has to attack in this Arsenal team, he has enough shooting opportunities to score more goals than he does. He uses the runs of those ahead of him – teammates who are looking to be slipped in on goal – to work space outside the area on his left foot, but he fails to take advantage, and his goal return has been poor.

Odegaard is always keen to get on the ball and his constant movement alongside other Arsenal youngsters in Saka and Emile Smith Rowe helps to pull opponents apart. A lack of experience in three attacking midfield positions means that dips in form are felt particularly hard, and there was sometimes a lack of composure that meant the team’s final ball was lacking. This was especially obvious in the case of Odegaard, who demonstrates impressive levels of confidence, but sometimes overcomplicates matters as a result. There is unquestionably plenty of talent there, but Odegaard is still searching for the team and coach that can bring out the very best in him at the top level.