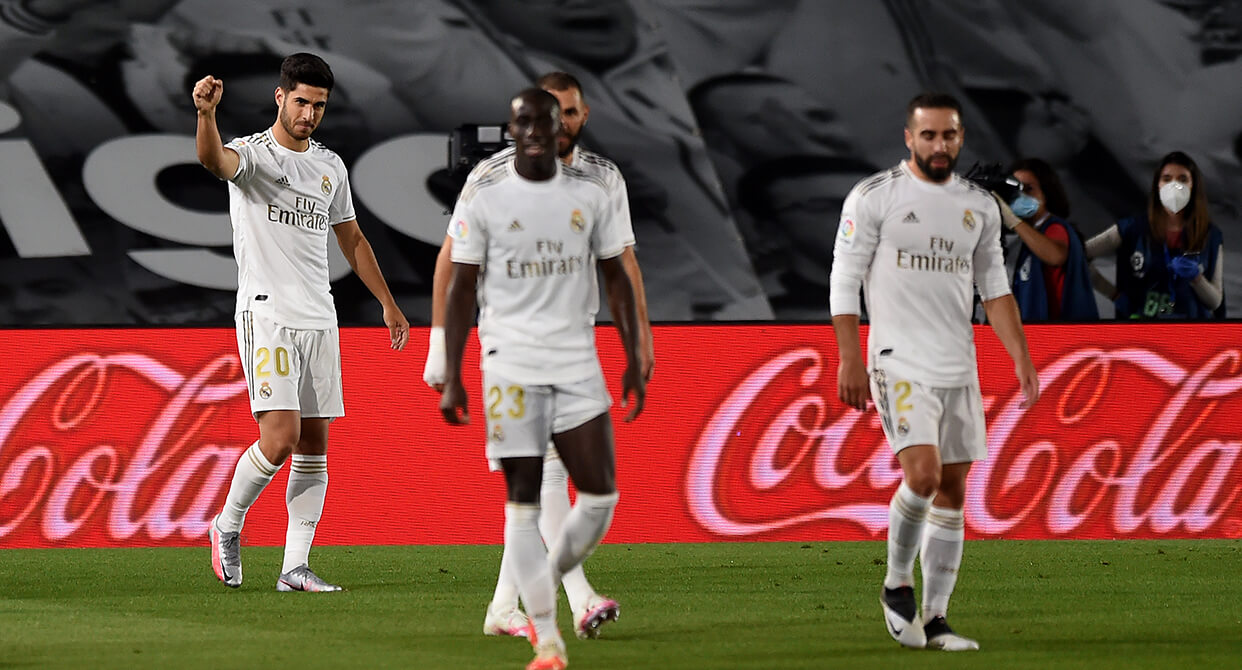 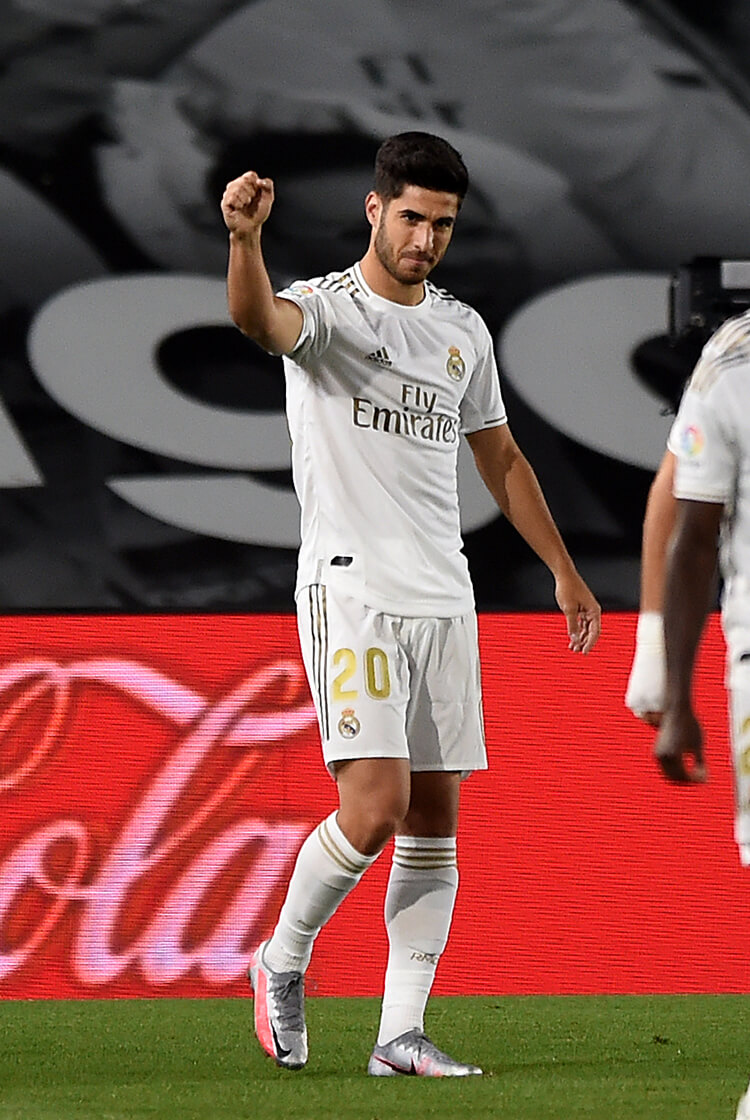 Real Madrid narrowed the gap to first-placed Barcelona to two points with victory over Valencia in La Liga. Two goals from Karim Benzema took his total for the Spanish giants to 243, ensuring he surpassed the great Ferenc Puskas' tally to become their fifth all-time leading goalscorer. After a goalless first half, his first finish was created by Eden Hazard, and his second was a fine volley, which came after substitute Marco Asensio scored with his first touch. Their latest three points also meant that Zinedine Zidane moved level with Vicente del Bosque in overseeing 133 victories as the club's manager. Only Miguel Muñoz, who recorded 357, has a higher total. With 201, Zidane is third in the list of matches managed – only Del Bosque, on 246, and Muñoz, on 605, have higher totals. 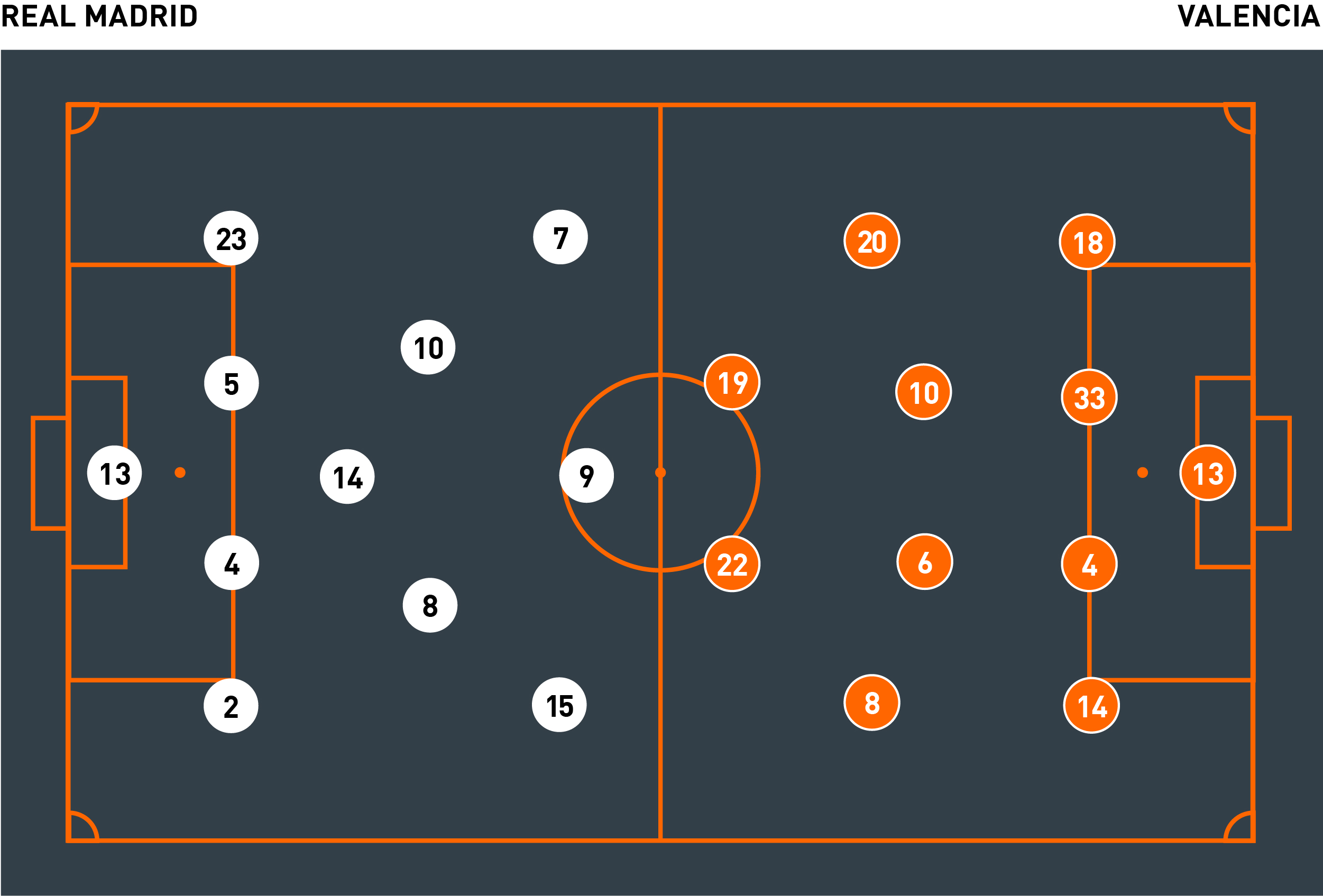 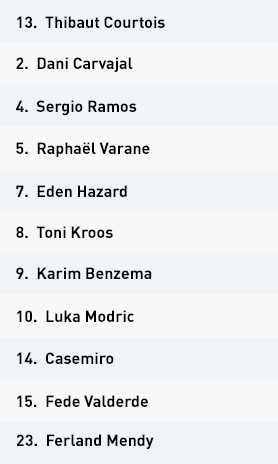 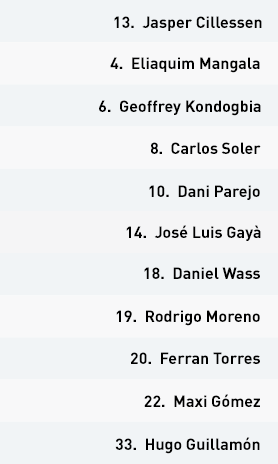 Zinedine Zidane set Real Madrid up in a 4-3-3 formation that featured Federico Valverde playing in a less familiar role on the right side of their attack. Their visitors, Valencia, used a 4-4-2 during the periods they were out of possession.

They were content to concede possession to Real and formed a compact mid-low block with the intention of restricting their attempts to advance in central areas of the pitch. Real circulated the ball but had significant difficulty in progressing into more attacking territory because of a combination of slow passing and their opponents' organisation.

Valverde often drifted inside and into a deeper area, creating space for Luka Modric to make penetrative runs and for Dani Carvajal to advance on the outside from right-back. Towards the left, Eden Hazard frequently moved inside, inviting Ferland Mendy to provide their width; Toni Kroos tended to operate slightly deeper. Real’s players created triangles on each side of the pitch between full-back, central midfielder and wide forward, and these players rotated to try and create holes in Valencia's defence, but they resisted and held their shape. In the first half Real were therefore restricted to shots from distance that Jasper Cillessen was equal to.

While protecting the centre of the pitch, Valencia were content with Real playing diagonal passes out wide. The hosts sought to draw their visitors towards the right side of the pitch before executing diagonal switches of play to Mendy on the left. If this led to occasional crossing opportunities, Valencia were again able to deal with the threat posed. When Real had the ball in the wide areas, Los Che set up with three active defenders – one engaging the player on the ball, one covering in the event of an overlapping run and another ready to engage should the ball carrier move inside. It was this strategy in the wide areas that led to Real frequently turning and playing backwards in search of another way through.


When Real built play from the back, Valencia attempted to press them near to goal and used a complex approach to do so. Rodrigo Moreno pressed Sergio Ramos when he had the ball, Ferran Torres closed down Mendy, Dani Parejo prioritised the deepest positioned midfielder, Geoffrey Kondogbia screened the nearest attacking midfielder – often Hazard – and Carlos Soler moved from the left side of midfield to towards another midfielder. In the event of a switch of play, which often represented the best available option, Maxi Gómez moved to press Raphaël Varane, Soler sprinted across to press Carvajal, and Parejo and Kondogbia followed. This required exceptional co-ordination, and ultimately brought mixed results.

As the second half progressed, spaces in Valencia’s structure began to open a little more, and Hazard’s influence grew as he found the room to more regularly beat opponents. Real’s best opportunities were coming during transitions, and it was no surprise that two of their three goals came in transitional moments. Valencia’s intention during defensive transitions was to recover their defensive shape, essentially forfeiting counter-pressing opportunities. If Real were able to regain possession quickly after a turnover or at least when the ball was still in Valencia’s defensive or midfield third, however, the visitors had less chance to recover their shape.

Real moved the ball quickly in transition, with willing runners offering the next passing option. They could have scored more than their three goals.

Valencia were organised by their manager Albert Celades into a 4-4-2 formation, led by the front two of Rodrigo and Maxi Gómez, during the periods they had possession. Real Madrid used a 4-4-2 while out of possession, through Eden Hazard advancing to alongside Karim Benzema, and Federico Valverde withdrawing to alongside Luka Modric, Toni Kroos and Casemiro.

Valencia’s positioning was somewhat unorthodox. Geoffrey Kondogbia withdrew to operate as a defensive midfield, Dani Parejo often positioned himself nearby in the left half-space, Carlos Soler advanced inside as an attacking midfielder so that José Luis Gayà could attack from full-back, Ferran Torres stayed high and wide as a right winger, and Gómez and Rodrigo played centrally.

They regardless had too little success in possession. They attempted to play the ball in behind for the penetrative runs of their forwards and the spaces in behind Real's defence; their forwards regularly withdrew to towards the ball before spinning in behind, but Real's defenders proved adept at negating this threat. Their lopsided and asymmetrical positioning ensured that Zinedine Zidane's team struggled to apply a compact press, but they ensured that their opponents were unable to receive possession and then turn and advance. If Valencia succeeded in temporarily advancing possession, it soon returned to where it came from because the player receiving possession had so few options.


Ferland Mendy resisted advancing to press his opposing right-back because of the potential for Ferran's positioning to create three-on-twos against Sergio Ramos and Raphaël Varane. Pressure on visiting goalkeeper Jasper Cillessen contributed to him attempting longer passes that Real's central defenders were comfortable against, and the combination of the aware Casemiro, Ramos and Varane meant that efforts to attack into the spaces between full-back and central defender also came to little.

After building their lead, Real adopted deeper positions and instead of working to extend that lead, sought to preserve it. Aware that Valencia were struggling to find spaces, their priority became negating their visitors' potential on the counter.