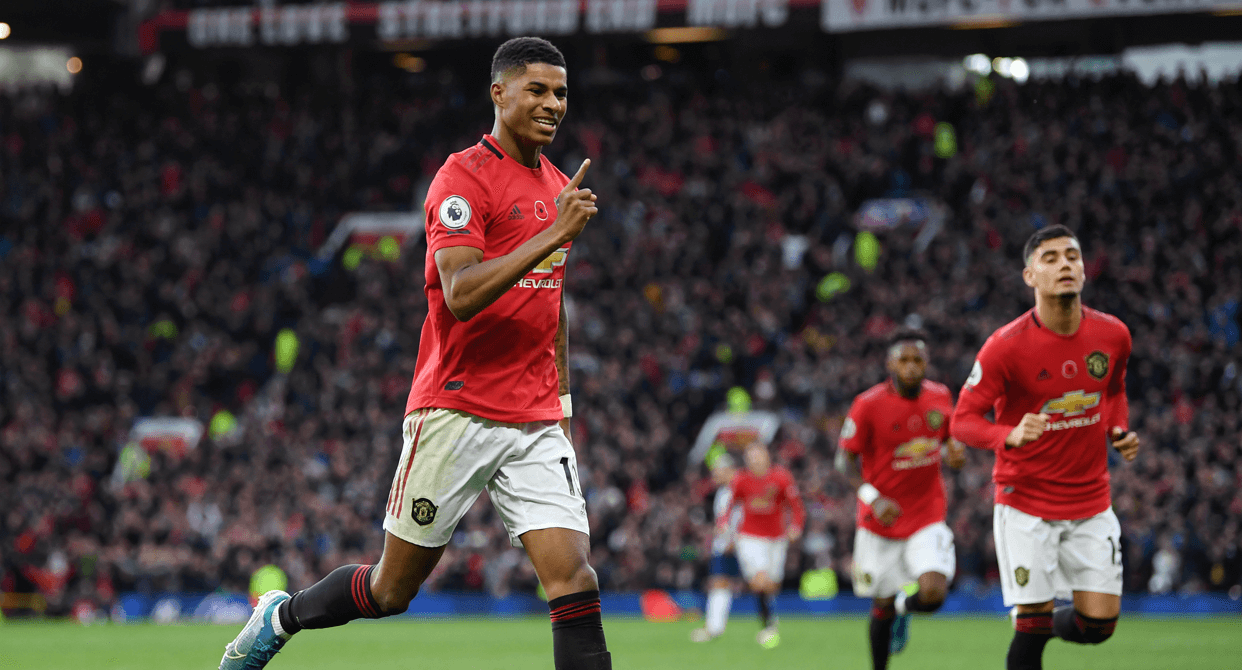 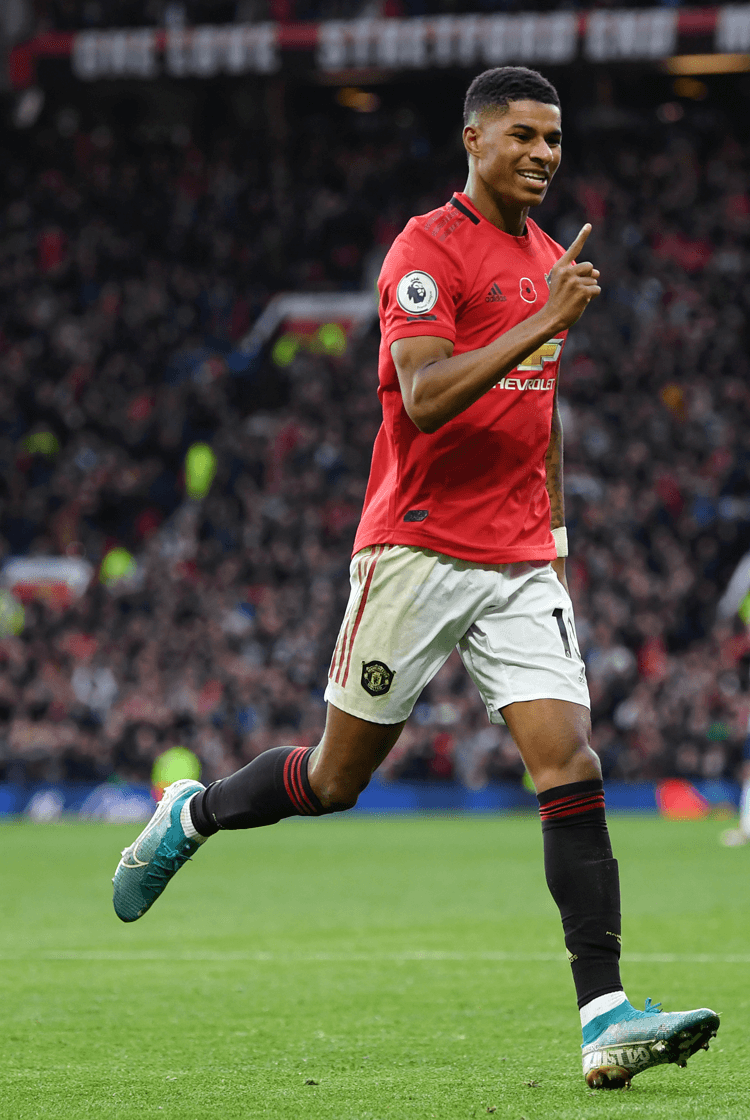 Liverpool extended their lead at the top of the Premier League to eight points, on the same afternoon their long-term rivals Manchester United showed further signs of recovering from a difficult start to the season with victory over Brighton. The Coaches’ Voice team of professional coaches have naturally revisited the tactical stories that underpinned the weekend's league fixtures.

Manchester United 3-1 Brighton
Ole Gunnar Solskjær's team demonstrated their growing belief when they essentially swept Brighton aside inside 20 minutes. They also swiftly responded to conceding during the second half, by restoring their two-goal lead.

The left-sided triumvirate of Marcus Rashford, Fred, and Brandon Williams provided quality, penetrative possession. Fred received, and accurately broke lines into the hosts' fluid front line; from left-back, Williams showed composure to advance towards the left-moving number 10 Andreas Pereira, who in turn assisted with Anthony Martial's attempts to draw Brighton's clumsy central defenders. The visitors' 4-4-2 was too easily penetrated, through United working the ball around their front two and then back towards Fred, who remained between the lines.

Rashford's speed and direct ball-carrying took him from the left into more central positions, which Martial vacated, to move towards the left. Daniel James also threatened from the right; Fred's incisive passing (above) complemented the pace of that front three, which Brighton simply couldn't contain.

Leicester 2-0 Arsenal
Unai Emery attempted to negate Leicester's significant attacking threat by adopting a back three and wing-backs but, while David Luiz appeared more comfortable within that back three and Mesut Özil regularly helped to advance possession, the hosts' changes during the second half ensured their latest victory. Demarai Gray featured as a second-half substitute, and gave them greater balance in the attacking half.

The threat he posed from wide positions split Arsenal's three central defenders. Ben Chilwell continued to play with caution, but Leicester's combinations along the right – supported by the cover provided by Wilfred Ndidi and Jonny Evans during transitions – repeatedly succeeded.

Harvey Barnes and James Maddison, operating towards the left, drifted across to offer support, and Arsenal's defence therefore shifted towards possession. Brendan Rodgers' team continued to penetrate along the right (above), and Jamie Vardy also thrived amid the additional space those movements meant he was afforded.

Southampton 1-2 Everton
Marco Silva's team largely dominated possession, but struggled to win via a wider margin because they too often lacked a quality final ball. Richarlison and Theo Walcott posed a regular threat from within the inside channels, and Lucas Digne and Djibril Sidibé provided width from full-back.

Gylfi Sigurdsson withdrew from operating as their number 10 to support Tom Davies, who advanced from within their double pivot; Southampton's desire to press Everton's defence made access to the visitors' creative players too easy, and when a central defender therefore had to provide cover the hosts' defence became disorganised. Sigurdsson adopting a more advanced position contributed to central attacker Cenk Tosun moving to support and combine with Richarlison and Walcott, who in turn were less involved during build-up phases and instead threatened in behind (below).

That pattern proving so repetitive invited Everton to create multiple goalscoring chances. They struggled to do so, however, until Sidibé finally produced the delivery they had long needed, leading to Richarlison's winning goal.

Wolves 2-1 Aston Villa
The absence of the injured Jack Grealish meant that Aston Villa struggled for creativity from within their 4-3-3. They too rarely had a presence behind Wolves' three central midfielders; their right-back Frédéric Guilbert was often their spare number against higher pressure, but their right winger Anwar El Ghazi too often remained on the same line, inviting Wolves left-back Jonny Otto to defend against both.

Similarly, Douglas Luiz and John McGinn were often in similar areas behind the ball (below), and reluctant to advance to between the lines and therefore to offer Guilbert a further option, even though Grealish and McGinn have often combined effectively when doing so. On the occasions McGinn moved into a position to receive between the lines, they regardless struggled to find him.

It was when Guilbert and El Ghazi moved off of the same vertical line during the second half, and therefore stretched Wolves' defence, that they began to pose a threat. But their only goal ultimately came too late for them to find the second they needed.

Liverpool 3-1 Manchester City
That Liverpool were so much more clinical than the defending champions ensured that they secured all three points at Anfield. They were superior in both penalty areas, and capitalised on Manchester City's narrow, defensive 4-4-2.

They were able to create a three-on-two overload against Rodri and Ilkay Gündogan through rotations within midfield. Jordan Henderson's runs inside towards the right – Roberto Firmino would move in the opposite direction – encouraged Mo Salah to receive in freedom wide on the right, where defending left-back Angelino played narrowly, and was ultimately compact with his fellow defenders.

With Firmino making delayed runs to combine with Salah, both Sadio Mané and Salah threatened from narrow positions, and combined impressively around City's narrow midfield. Their incisive switches contributed to Salah heading their second goal.

Henderson made forward runs from midfield during the second half, when Fabinho and Georginio Wijnaldum featured as the double pivot against Rodri and Gündogan (above). He also provided width which, when Salah joined Mané as a second central attacker and Firmino withdrew to maintain their overload in midfield, led to Mané's first and Liverpool's third goal.