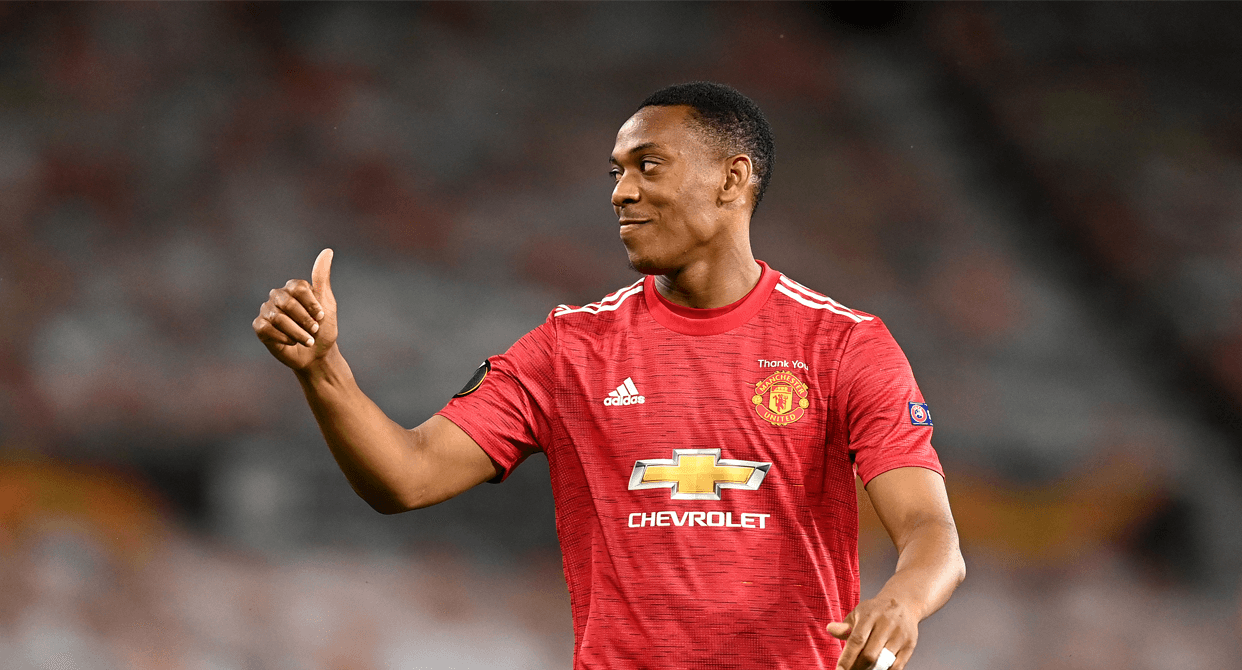 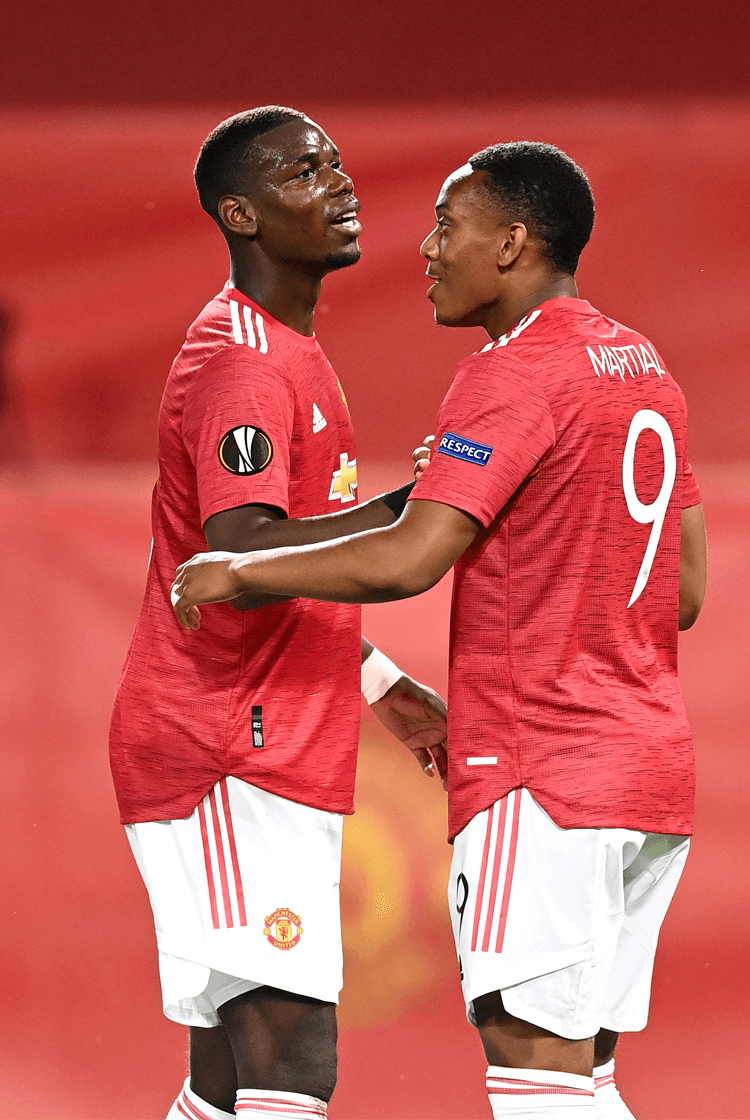 Manchester United recovered from a goal down to beat Austrian opponents LASK and progress to the quarter finals of the Europa League. After a fine strike from Philipp Wiesinger gave the visitors the lead in the 55th minute, Jesse Lingard scored in successive matches for the first time since December 2018, and substitute Anthony Martial struck his 23rd goal of the season after being played through by the impressive Juan Mata, giving them a convincing 7-1 aggregate victory. "Some of these lads haven't played for a while and it showed," said United's manager Ole Gunnar Solskjaer, who must next guide his team beyond FC Copenhagen if he is to emulate José Mourinho's achievement of winning the Europa League in his first full season as manager at Old Trafford. "We won, we gave a debut to a young lad, it's been a good night. For me it was a good exercise, it's job done, minutes under the belt and on to Copenhagen." 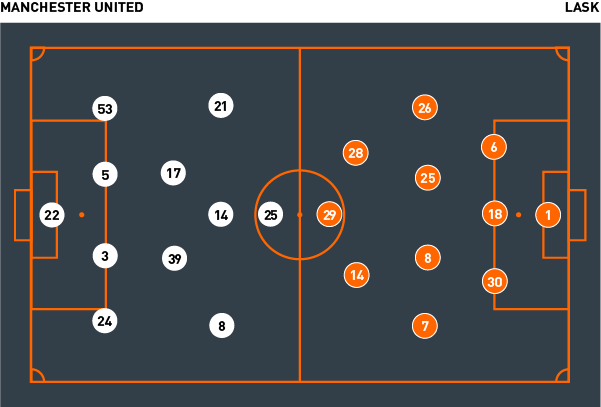 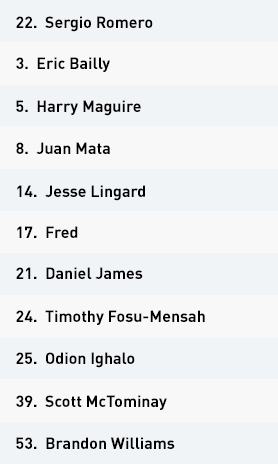 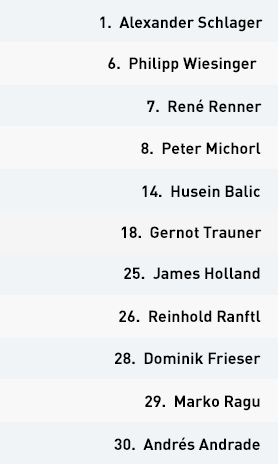 Ole Gunnar Solskjaer set Manchester United up in a 4-2-3-1 structure, and they encountered an energetic opponent first applying a high press from a 5-4-1. The double pivot of Fred and Scott McTominay offered passing lanes on the inside of LASK’s first line of pressure, and Juan Mata drifted from the right to join Jesse Lingard and overload the central areas of the pitch. Mata’s movements created space for Timothy Fosu-Mensah to advance from right-back, and from the left Daniel James moved centrally to form a front two with Odion Ighalo.

Mata increased his movements across the pitch as the evening progressed, and often moved far from his starting position on the right. LASK quickly changed their defensive structure to form a 4-3-3, through René Renner withdrawing into defence to operate as a left-back. The visitors also reduced the height of their press, and formed a mid-block. Mata, playing alongside Lingard as a second number 10, ensured that United retained their central overload despite LASK having a midfield three when defending.

United's best method of progressing possession came towards the right, where they took advantage of Renner retreating back into defence. Fosu-Mensah’s height was a key outlet, particularly when coupled with a quick switch of play and given LASK’s front three worked to press United’s three remaining defenders.

When Mata held his width, Lingard became the sole number 10 between both sides deploying three central midfielders. Mata and Fosu-Mensah overloaded Renner, and supplied balls into the final third from wide on the right. James occasionally resisted working back into midfield, in an attempt to gain a positional advantage against his opponent by using his pace to advance in behind LASK's defence. Yet despite being played in, on a few occasions James struggled to create chances on goal, and sometimes lost possession when looking to cut back inside.


James was later moved to the right, where he replaced Fosu-Mensah as the one making forward runs. Mata adopted a more central role, and Lingard played from the left. United therefore focused more attacks towards the left where Brandon Williams moved around Lingard, who drifted inside. Whenever Lingard moved centrally he drew LASK’s right-sided central defender with him, inviting Williams to freely attack and to provide dangerous crosses from which United should have done better.

Lingard quickly scored, after United had fallen behind, when good link play with Mata through the inside channel was followed by him making a run in behind and calmly finishing. Lingard continued to move inside and to occupy LASK’s Reinhold Ranftl, and the remainder of LASK’s central midfield focused on the hosts’ double pivot. Mata was therefore free to receive possession and to link play with James, Ighalo and Lingard; it was through the inside channels that United regularly succeeded.

A flurry of changes affected the hosts’ rhythm. Paul Pogba’s introduction did, however, lead to them accurately playing over LASK’s pressure, especially when targeting James after the Frenchman withdrew to towards central defence to collect possession. McTominay also made more forward runs to support Mata when essentially playing as a box-to-box midfielder alongside the deeper pivot provided by Pogba. United’s quality eventually secured victory when their substitute Anthony Martial scored their late second goal after a neat combination with Mata that was helped by McTominay’s decoy run.

LASK were instructed by their manager Dominik Thalhammer to attack with a 3-4-3 formation, and to prioritise reaching the spaces between the lines of Manchester United's structure as quickly as possible following regains. Their wide forwards Husein Balic and Dominik Frieser adopted narrower positions in their attempts to support their striker, Marko Raguz, but the visitors struggled to consistenly secure passes beyond the double pivot provided by Fred and Scott McTominay.

The intensity of LASK’s press contributed to them making regains in midfield, and often because after those regains United also sought to play forwards quickly. The narrower press LASK's attack offered contributed to a narrower press the frustrated United's double pivot, and therefore the quality they offered during transitions increased.

If LASK attacked with lengtheir spells of possession, their wide forwards made dropping movements to help them link around that double pivot and beyond United's midfield, but they then had too few numbers to threaten between the lines. That their attacking width was provided by their wing-backs also meant that those wing-backs were often unable to cover the necessary distances needed for them to contribute in the final third. United therefore increasingly found it easier to counter from deep territory – particularly into their wider runners.


LASK continued to target their narrow front line, but in lengthier passes over their opponents and passes to the feet of those attackers they added increased variety to their efforts to do so. Doing so meant them penetrating beyond their hosts' defence for the first time, and the support those efforts were complemented by ultimately forced Jesse Lingard and Daniel James to increasingly track back, undermining United's counter-attacking potential.

A superb strike, from Philipp Wiesinger after a corner was cleared, gave LASK the lead, but United scored swiftly afterwards when punishing an uncoordinated offside trap. United's attacking play also offered increasing quality, and therefore regularly succeeded towards the right.

When LASK's wide midfielders were forced to retreat to contribute to their defensive efforts in the inside channels, their front three again became isolated and struggled against the overload United offered between their defenders and two defensive midfielders. United's superior quality ultimately then told when their substitute Anthony Martial scored their late winning goal.