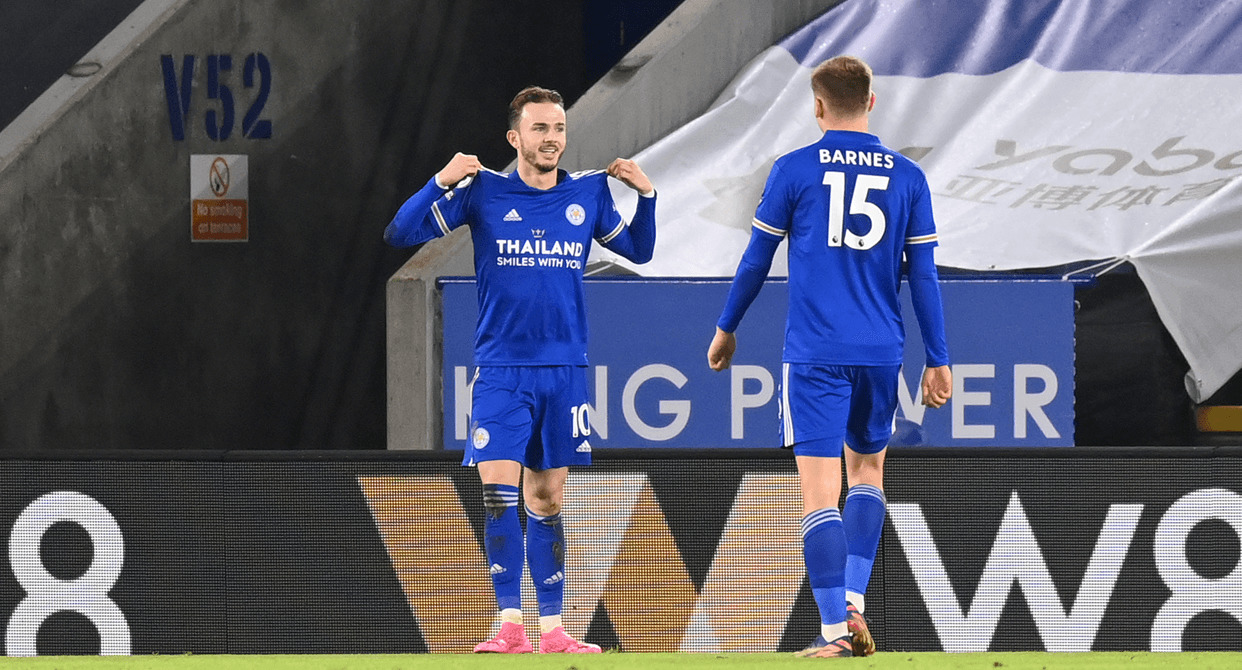 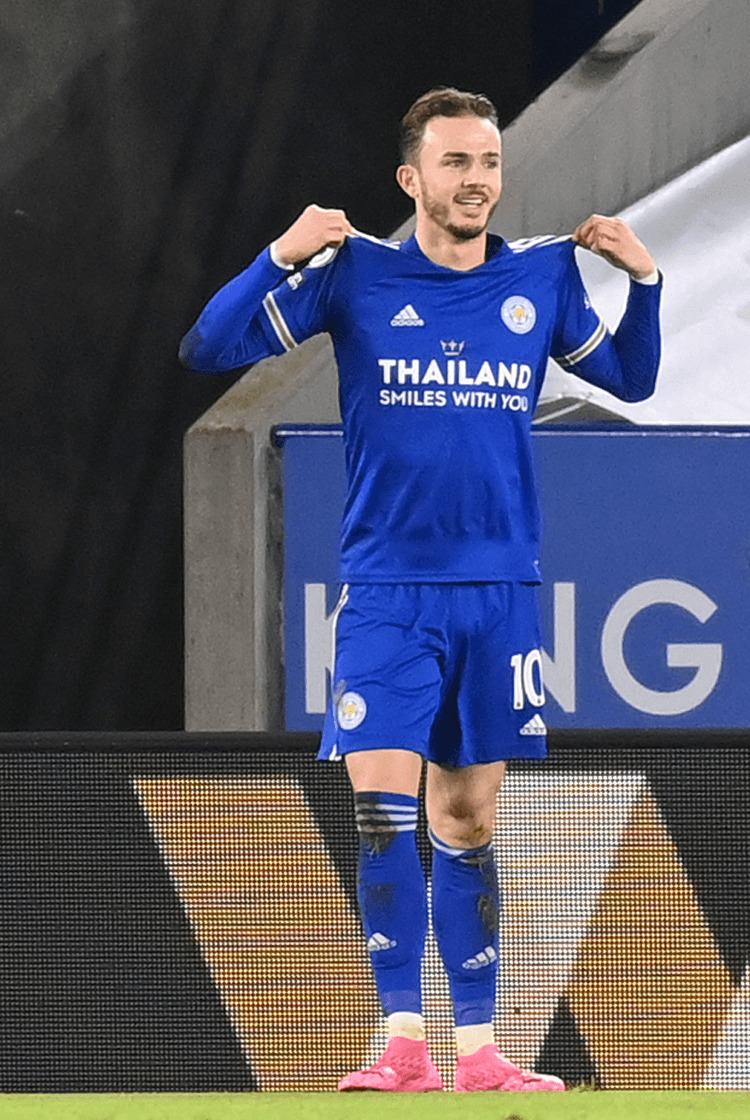 Leicester moved above Manchester United and into first in the Premier League by beating Chelsea, and leaving their manager Frank Lampard under increasing pressure. Goals in the first half from Wilfred Ndidi and James Maddison rewarded the hosts' attacking approach, and concluded an impressive first half to 2020/21. "You have seen the real spirit of the side," said their manager Brendan Rodgers. "We were a real threat going forward. The performance and maturity of the team was pleasing. I knew we were playing against a talented team and we had to be right on our game." Lampard said: "There are players who are not playing as well as they should be, that's a simple fact. I'm disappointed with both the goals. We know we can compete with Leicester when we are are playing well but when you go 2-0 down and you are in a difficult period of form it affects the game hugely. The players know they were beaten by a better team, a team we are behind and one we want to catch. The general theme of our performance was slow and sluggish." 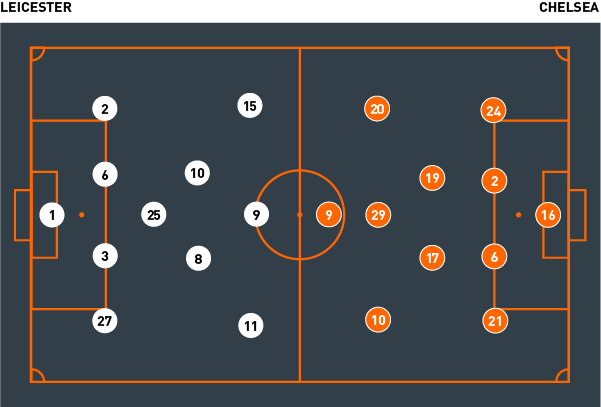 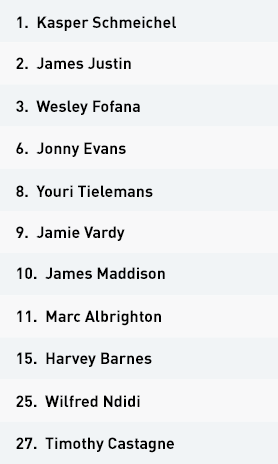 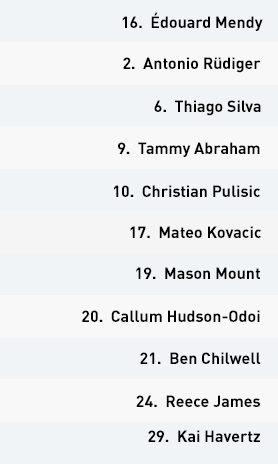 Leicester adopted a 4-3-3 formation, as demanded by their manager Brendan Rodgers, and on this occasion were led by the front three of Marc Albrighton, Jamie Vardy, and Harvey Barnes. Their opponents, Chelsea, remained in their 4-2-3-1.

Rodgers' team sought to build possession from defence, by pursuing spaces between Chelsea's mid-press. Tammy Abraham attempted to pressure Wesley Fofana and Kai Havertz took Jonny Evans; if possession was transferred between the central defenders, Abraham and Havertz simply swapped roles. Callum Hudson-Odoi and Christian Pulisic started with narrow positions to screen passes into the feet of Albrighton and Barnes, but if possession reached their opposing full-back they moved to pressure him instead, and in central midfield Mateo Kovacic and Mason Mount took James Maddison and Youri Tielemans.

Leicester's success in playing out from the back was mixed. When Chelsea were organised and their movements coordinated, Kasper Schmeichel would have to play clipped, forward passes to a full-back or in behind for Vardy to pursue; when Leicester's movement tested Chelsea, spaces could be created for them to penetrate through.


The hosts' full-backs also took advantage of Hudson-Odoi and Pulisic being less willing to track them by making forward runs on their blindside when their attention had been drawn to the ball. It was the understanding between Leicester's full-backs and wide forwards, and the contrasting movements they made, that sometimes took them beyond Chelsea's structure.

Reece James and Ben Chilwell attempted to move with Albrighton and Barnes, but they were rarely capable of stepping in front of them to win possession, so Albrighton and Barnes combined with the forward runs being made from the full-back behind them to eliminate their direct opponents. Maddison also did so by drifting wide to receive outside of Kovacic or Mount, who were reluctant to follow him.

Chelsea perhaps should have prevented Leicester's opening goal, which came from a set-piece routine, but they were not sensitive enough to the danger that existed. Similarly, a routine ball in behind led to Leicester's second, and came after Chelsea had appealed for a penalty, potentially affecting their concentration.

Chelsea were organised by their manager Frank Lampard into a 4-2-3-1 formation led by Tammy Abraham. Their hosts, Leicester, remained in a 4-3-3.

Brendan Rodgers' team demonstrated patience when they were without the ball. They continued to attempt to control what was unfolding by dictating where Chelsea could and couldn't play; Jamie Vardy and James Maddison prioritised Mateo Kovacic and Mason Mount, and Wilfred Ndidi took Kai Havertz.

With Harvey Barnes and Marc Albrighton adopting positions between their opposing full-back and central defender, they sought to screen that full-back and to encourage play infield. Youri Tielemans attempted to offer cover behind Leicester's attacking players and to move to towards Kovacic if Vardy had advanced to press Chelsea's central defenders.

Leicester also adopted a particularly narrow shape when Chelsea took possession into the central areas of the pitch, or into the half-spaces. Ndidi's positioning became crucial in preventing passes into Chelsea's front three; he remained ballside to do so, so Maddison or Tielemans instead took the ballside midfielder, and their wide forwards moved infield to also screen passes. Access to Chelsea's full-backs remained possible, but access back infield was not.


Chelsea were therefore largely left playing in front of Leicester, and circulating possession without penetrating forwards. In an attempt to progress the ball they attempted long diagonal passes from a central defender to the furthest full-back, but while the ball travelled through the air their opponents proved capable of moving across to deal with the delivery as it arrived, by at the very least influencing the first touch taken by that full-back.

Beyond Leicester's effective defensive organisation, Chelsea also showed a lack of creativity. When possession was played into the feet of those in midfield or further forwards, it was regularly returned backwards, and not followed by a penetrative, forward pass. Christian Pulisic and Callum Hudson-Odoi increasingly moved infield to be positioned closer to their fellow attacking players, to encourage quicker play and combinations, and to eliminate opposing defenders, but a lack of forward, penetrative movements continued to undermine Lampard's team. Abraham occasionally sought to make runs in behind when possession was in deeper territory, but those behind him were too rarely willing to attempt the pass he required.

Leicester reorganised to defend with a 4-4-2 during the second half, via Maddison advancing to alongside Vardy, ensuring Chelsea would need to take more risks, but they simply didn't do so. Penetrations were achieved outside of the relevant full-back by Chelsea's full-backs, who in turn sought to play crosses, but Leicester defended well against them. The impressive Wesley Fofana and Jonny Evans were rarely stretched, and remained compact.