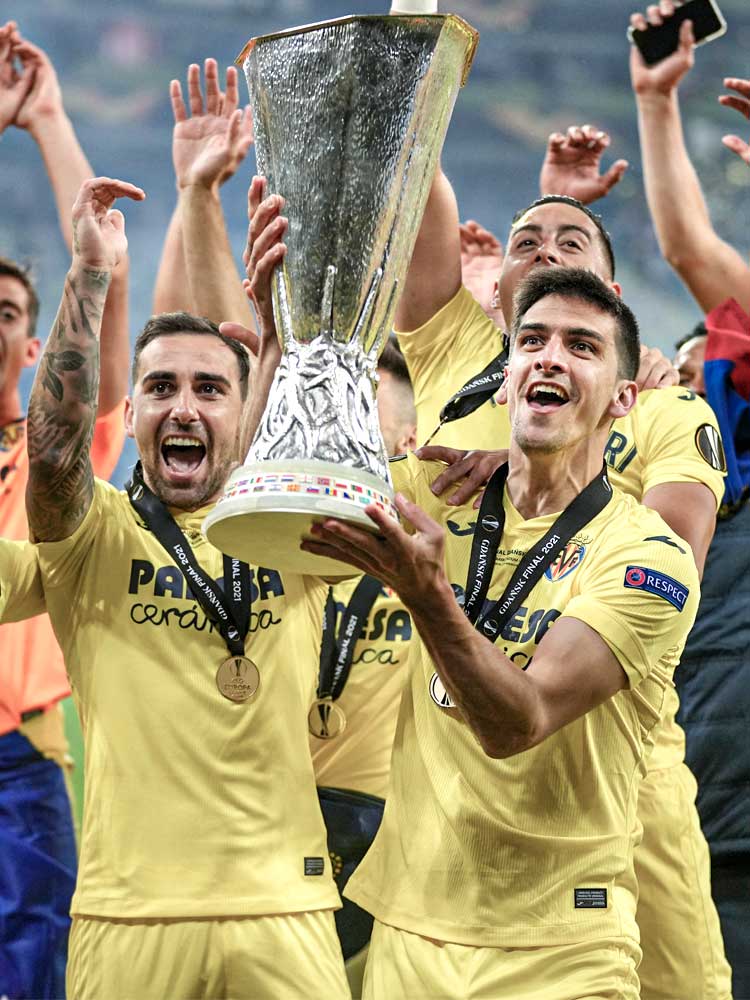 Villarreal lifted their first ever major trophy, and Unai Emery a record fourth Europa League, after beating Manchester United 11-10 on penalties. On the anniversary of both Sir Matt Busby's birth and the 1999 Champions League final that made United's manager Ole Gunnar Solskjaer such a hero, United trailed at half-time after conceding to Gerard Moreno, and though Edinson Cavani scored to take them level during the second half, they rarely looked like scoring a winning goal. Instead, after both teams showed admirable composure and quality to score each of their first 10 penalties, Villarreal goalkeeper Gerónimo Rulli scored past David de Gea before saving from the Spaniard to finally determine a winner. "We're getting closer and closer and better," said Solskjaer, denied his first trophy as United manager. "We were one kick away from a trophy and a good night." Emery said: "In the Europa League we have been absolutely impeccable. We have been able to give joy to many people.”

Villarreal manager Unai Emery set his team up into a 4-2-4 formation in which Étienne Capoue and Dani Parejo featured in central midfield. Manchester United defended with the same 4-2-3-1 with which they attacked.

Emery's team was content to concede possession and to instead, where possible, attack on the counter. They regardless remained fluid in possession, and sought to build during the periods they had the ball. Manu Trigueros drifted infield to form a midfield three, and Gerard Moreno or Carlos Bacca moved wider, testing the desire of United's central defenders to retain their positions or to follow them. Eric Bailly regularly followed, and as he did so impressed when duelling one-on-one.

United's pressing approach was prepared for Tiguerous' movements; Aaron Wan-Bissaka moved to take Alfonso Pedraza, freeing up Scott McTominay to prioritise Trigueros; Mason Greenwood and Bruno Fernandes took Capoue and Parejo, and Edinson Cavani prevented switches of play via Villarreal's central defenders. It was only if United were slow to move that Villarreal slid passes outside of Wan-Bissaka and into the feet of Moreno.

Triguerous, however, started to use his movements infield to draw United into their press before then exploding into a wide area with a diagonal run which, if combined with Bacca and Moreno remaining central, gave him space to advance into. McTominay regardless tracked him as he moved.

Villarreal looked to play forwards early upon regains, and into the forward runs of their front four. United instead succeeded in recovering well and defending against them doing so, as was demonstrsted by Emery's team recording only one shot on target, when Moreno met a fine delivery from Parejo.

David de Gea was otherwise rarely troubled, and aware that set-pieces posed Villarreal's greatest threat. Villarreal also sought to create combinations in the wide areas, via their full-backs and wide forwards – there were even occasions their central midfielders moved around and behind Wan-Bissaka and Luke Shaw – but they lacked the quality required to convince.

Manchester United were organised by their manager Ole Gunnar Solskjaer into a 4-2-3-1 formation led by Edinson Cavani. Their opponents, Villarreal, defended with a 4-4-2, via Yeremi Pino and Manu Trigueros withdrawing into midfield.

United recorded 59 per cent possession over the course of 120 minutes. That they had only two shots on target demonstrates the effectiveness of Villarreal's rigid, organised defensive structure; they succeeded in denying United access to potential space in behind and between the lines, and worked to negate the three-on-two that existed against them in midfield.

The latter was achieved via their front two and midfield four sharing responsibility for doing so; Carlos Bacca and Gerard Moreno typically adopted positions in front of Paul Pogba and Scott McTominay while looking to edge towards Eric Bailly and Victor Lindelöf. When they remained closer to the two midfielders, Dani Parejo and Étienne Capoue prioritised the space behind them, and Bruno Fernandes. If Bacca and Moreno moved to press the in-possession central defender, those responsibilities changed; the relevant forward moved to press with the wide midfielder and edged to towards the full-back if that's where the ball was played, the far-side central midfielder moved to take his opposite number,  and the other central midfielder marked Fernandes. The extent to which the picture of the game changed meant Villarreal consistently having to adjust to avoid being exposed, and they did so through the principle of defending the worst-case scenario – ensuring that the most dangerous potential passes were covered so that United were denied.

They similarly impressively defended the wide areas of the pitch. Their wide midfielders and full-backs engaged United's full-backs and wide forwards, and the ball-side striker recovered far enough to take either Pogba or McTominay, freeing up Parejo and Capoue to track attacking movements infield, to provide cover should their full-back or wide midfielder be beaten, and to ensure their two central defenders retained their positions.

The lack of space United were afforded meant them resorting to playing passes in behind for their attackers to chase – Pogba withdrew into a deeper position to do so – but Villarreal also defended well against those efforts. An alternative involved them attempting to create in the wide areas – Marcus Rashford and Luke Shaw regularly changed positions towards the left, and their opponents struggled to maintain the intensity required to continue to defend those areas, leading to United quickly circulating possession before playing early crosses into the penalty area. Cavani's movement in getting in front of his opponents meant that doing so offered potential, but it was still from the second phase of set-pieces that United most threatened.

Their goal came at the second phase of a corner that was awarded after the second phase of a free-kick. Villarreal struggled to be organised against the relative chaos that unfolded in the penalty area, and it was that that United targeted. Their difficulty in penetrating through the centre of the pitch meant Fernandes dropping into both deeper and wider positions during the second half, in an attempt to encourage Shaw to advnace further forwards and draw midfielders into following Fernandes, in turn creating increased space in which Shaw and Rashford could combine. Substitutions made by Villarreal were also significant – they contributed to Unai Emery's game plan being executed with renewed energy.