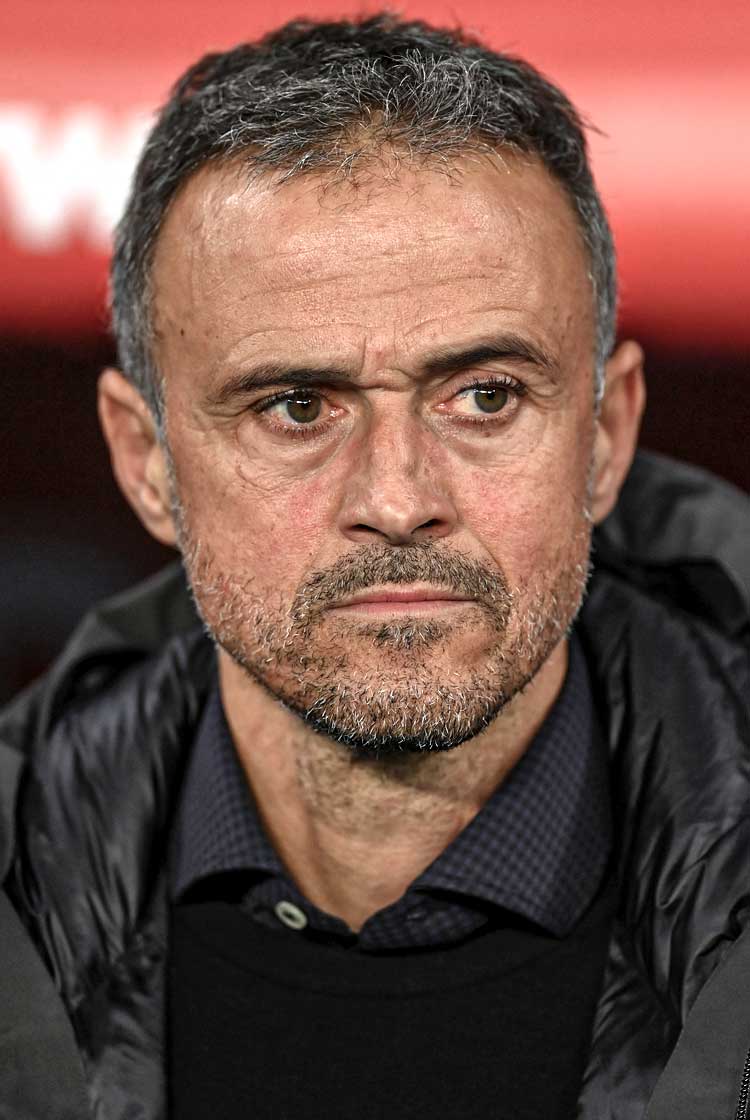 Following a trophy-laden playing career with Real Madrid and Barcelona in which he learned from many of the best coaches in history, Luis Enrique made a hugely impressive switch to management. Such was his success with Barcelona – who he led to an historic treble in 2015 – that he was given the Spain job, and he is constantly linked with many of the biggest jobs in club football.

Pep Guardiola, a former Barcelona manager who made a hugely successful move first to the Bundesliga and then to the Premier League, is a big fan of Enrique's, and seemingly believes he could succeed anywhere.

"There are few managers in the world better than Luis Enrique," Guardiola once said. "(He was) the perfect trainer for Barcelona – his personality, his character. He had two or three years and played some unbelievable football with unbelievable players."

Enrique favours an attacking brand of football that, through his education while playing at Barça, demonstrates his understanding of a positional game, or juego de posición. His teams impress with their vertical and transitional play, as well as the way they keep the ball away from the opposition. His favoured shape is a 4-3-3 (below), but he has also regularly experimented with a 3-4-3 and 3-4-2-1. He is not wedded to a particular shape, and regularly varies how he sets his teams up.

Spain, are usually organised into a 4-3-3, but their approach is noticeably more vertical than Enrique’s hugely successful Barcelona team. This is largely because the profile of players available to him with Spain are less capable of implementing his positional game than those who won the treble in 2015. Orthodox wide forwards are used out wide rather than creative attacking midfielder who drift infield.

The positioning of these wide players is fundamental to how his teams play. They play an important role in making the pitch big, as well as pinning the opposition’s full-backs and preventing them from moving inside to create central overloads.

In central midfield, captain Sergio Busquets marshals the team. He knits everything together from the base of midfield (below). Busquets has the ability to direct a game with wonderful simplicity, and he is such a smart footballer that he is loved by every manager who works with him. When it comes to Enrique, Busquets understands exactly what the team's needs at any given moment – both in and out of possession.

Enrique has given the starting goalkeeping position to Unai Simón, who has great reflexes and commands his area, but he stands out most for his ability with the ball at his feet. This additional ingredient gives Spain an extra man in the build-up phase. This is a fundamental part of Enrique’s game, and he is happy for his team to take risks on the ball all over the pitch. The aim is always to try to use the goalkeeper playing out to create numerical superiority elsewhere on the pitch by drawing an opponent out to close Simón down (below).

When Spain are confronted with a two-man front line, their central defenders position themselves close to or inside the penalty area but split as wide as possible to provide a passing option for the goalkeeper. The central midfielders then come looking for the ball, positioned in front of the penalty area to offer vertical passing lines, before turning and progressing play up the pitch. If the opposition press with three forwards, Spain’s right-back then moves infield to add an extra body and maintain numerical superiority.

Once an initial press has been overcome, Enrique's teams look to progress forwards more swiftly than previous Spain teams might have done. They often look to get the ball to their wide forwards quickly, and Enrique selects players here who are good at dribbling directly towards goal at pace. He also likes wide forwards who are able to threaten the space in behind the opposition. Given the talent Spain have in central midfield, Enrique’s teams can combine short-passing play with longer, direct balls in behind. This has the benefit of drawing opponents towards the ball and out of their block, before a ball is played beyond the opposition for a quick wide forward to chase.

Their attacking midfielders make more attacking runs from deep as a result, and provide a threat on goal rather than just remaining behind the front three. Where once Andrés Iniesta and David Silva were prominent, players likelier to make box-to-box runs, such as Koke and Fabián Ruiz, now play a more prominent role. These players still excel between the lines, though, and Enrique also likes to get Gavi into those positions regularly. With a low centre of gravity and good strength, his turns on the ball when he is found between the lines are one of the best ways to make progress against opponents in a deep block (below) or with tightly packed lines. The profile of the midfielders Enrique chooses makes his team adaptable and versatile, and therefore able to play several different ways. Enrique is able to make changes during games without changing personnel.

It is at centre-back, however, that Luis Enrique has had greatest impact on this Spain team. That is because Sergio Ramos, who was for years guaranteed a place in the team, was absent from Spain squads for the majority of 2021 due to a succession of injuries.

Ever since the delayed 2020 European Championship, Eric García and Aymeric Laporte has been Enrique’s most-used combination at the back, although Iñigo Martínez and Pau Torres have also played there, too. The fact that Laporte, Torres and Martínez are all left-footed has led to García becoming an almost instant selection for Enrique. García's ability attract opponents towards the ball and filter balls into midfield (below) has also made him a crucial part of how Enrique's team play out from the back. He plays a significant role in the team’s build-up play.

As has been the case for years with Spain – a team who won Euro 2012 with central midfielder Cesc Fàbregas playing as a false nine – there are ongoing doubts in the centre-forward position. Enrique has not only been rotating between names, he has also been changing the type of player he chooses there. Álvaro Morata, Abel Ruiz, Raúl de Tomás and Gerard Moreno have all had stints up front. As a result, Spain have played under Enrique with a single striker, with two strikers and without a traditional nine. Solving that puzzle might be the greatest challenge that faces Enrique with this Spain team. Unlike at Barcelona, he cannot call on a forward line of Lionel Messi, Luis Suárez and Neymar.

Enrique always wants his teams to defend on the front foot. He asks his players to harass the opposition and make it difficult for them to progress up the pitch. This will naturally be difficult to maintain for a full match at full intensity, but Enrique is very demanding of his players.

The press is led by the wingers, who press the outside shoulder of the opposing centre-backs, while striker will screen passes into the opposition’s defensive midfield. A midfield teammate will join the striker to help prevent the opposition from playing into the centre of the pitch. If the front line are unable to win the ball back high up the pitch, the team drops back into a compact 4-1-4-1 structure.

However, if the opposition’s most advanced midfielder retreats – even as far as the centre of defence – Enrique requires one of his midfielders to follow him. It is not unusual to see his defensive midfielder in that position (above).

Busquets is a real specialist in the art of recovering the ball and supporting a high press. Combining this ability with his eye for the first pass upon a regain to secure possession, he is a crucial member of Enrique’s set-up. The Spain manager will nevertheless sometimes include Manchester City’s Rodri alongside Busquets to further bolster his midfield against stronger opponents (above).

Luis Enrique used 43 different players in qualifying for the 2022 World Cup, showing how willing he is to vary his approach depending on the opposition. Time will tell whether he is able to add to his impressive silverware collection with the national side, or if the draw of club football is too great for him to resist.