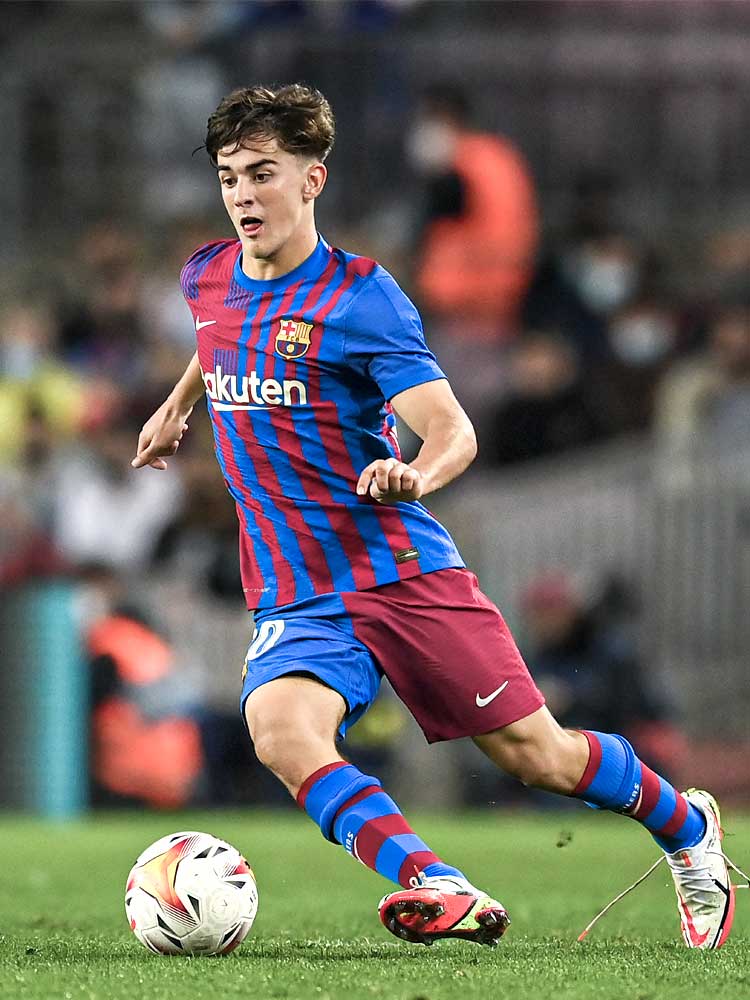 Profile
Gavi had just turned 17 and had played only 374 minutes of senior football when Luis Enrique, also once a cultured midfielder for Barcelona and Spain, called him into the national squad to hand him his debut in midfield against Italy, the European champions. He has rapidly emerged at Barça when they are rebuilding after the departure of Lionel Messi and, alongside Pedri, has impressed to the extent that hopes already exist that between them they can emulate the achievements of Xavi and Andres Iniesta, once Messi's respected teammates.

"In the three or four spells I have seen him, and it is only three or four, he has left me in no doubt that he can be a very important player for the future not just for Barcelona but also the national team," said Enrique, also once a teammate of Pep Guardiola for club and country, of Gavi when calling him up at the age of 17 years and 62 days in September 2021. "Age doesn't matter. He's more than ready. I like what I see."

Tactical analysis
The right-footed Gavi has so far proven most effective in the inside channels, from where his weight of pass and ability to break lines when playing the ball enhances his teammates' ability to penetrate forwards. His technical ability means he can thread balls through narrow spaces without sacrificing the necessary detail to complement his target's movement; if that target is advancing to cross, Gavi will play the ball with the appropriate weight (below) to encourage an early delivery and match their stride.

If his teammate's run is instead taking him across the pitch, and away from a marker, Gavi will execute a different angle of pass with a different part of his foot to send it into that teammate's path.

The forward runs he makes (below) are similarly effective. He can regularly be seen waiting for an opponent to move towards him and detecting that the second closest opponent hasn't moved with them to preserve their compactness, and therefore intelligently reacts at the opportune moment.

He applies the same depth of thought when he is the one receiving passes or carrying the ball upfield, when his frame helps him to change direction and ensure he remains sufficiently agile to move sideways to avoid challenges. That he can wriggle away from pressure means he regularly prioritises retaining possession, instead of penetrating forwards, as he often does when withdrawing to towards the ball to support those in defence or at the base of midfield. While doing so he demonstrates the same intelligence and sense of timing by covering those who have advanced, and withdrawing into deeper territory when further support is required. If he can continue to improve so that there is a consistency to his passes into feet away from pressure he will prove even more capable of enhancing his teams' ability to build possession.

He regularly shows a similar desire and aggression to advance into the penalry area if there exists sufficient cover in midfield and, should the runs he make attract the attention of his opponents, they can serve as a decoy to encourage a teammate to instead progress the ball – potentially from behind Gavi's initial movement.

His aggression is complemented by the tenacity (below) with which he duels and presses, whether applying a counter press or more routinely defending. He seeks to both cover from behind a teammate and to jump out to meet the ball and make regains. Though he can be overly assertive, there is an obvious intent to recover the ball via pressing instead of, simply, applying pressure to force opponents away from specific territory; there are also times when he has instead proved capable of delaying opponents.

Role at Barcelona
Gavi has most consistently featured as one of the two attacking central midfielders in what is mostly Barça's long-favoured 4-3-3 (below), and seeks to adopt positions in the inside channel to, where possible, advance and receive between the lines. The quality he has already shown suggests he is capable of being given a regular role for the coming years – and one in which he can continue to move to between the lines and provide cover from behind their advancing full-backs or alongside their defensive midfielder, or underlaps inside of their wide forwards.

Jordi Alba, Sergiño Dest and Óscar Mingueza have all benefitted from Gavi's willingness to support their overlaps from full-back and the passing option he provides to restart moves when it is no longer an option for them to advance. The potential combinations he can contribute to from behind the ball also draw opponents before he can bounce play into a teammate in a wider position; the detail and timing of his passes also helps to release Barça's overlapping full-backs or wide forwards, potentially to where they can play first-time crosses into the penalty area when attacking against a deep defensive block.

Gavi's forward runs inside of their wide forwards have also helped Barça's attempts to progress possession. Should, perhaps, Memphis Depay or Frenkie de Jong not fully move across, Gavi's movements can draw defenders towards him to create space for the relevant wide forward to cut infield, or full-back to advance, under reduced pressure. A potential insight into what could yet be a regular theme in the club's long-term future exists in Gavi's decoy movements inviting Ansu Fati to cut infield from the left.

If Gavi is instead the one receiving the ball after advancing he seeks to, as quickly as possible, play it back infield via a low ball across the area or cut-back into a teammate – potentially a number 10 if they have been organised into a 4-2-3-1 (below). On the rarer occasions they are instead attacking with a 3-5-2, when possession is being built Gavi advances towards the right when Depay drifts to the left, and supports from behind the ball in the knowledge that their wing-backs are providing their attacking width.

There have even been occasions when Gavi has been given a wide role in their 4-3-3 or 4-2-3-1, but when that is the case he regularly drifts infield to, as when he is selected as a central midfielder, continue to attack through the inside channels. When doing so the full-back behind him consistently has space to advance into; if there also exists a double pivot behind him Gavi remains advanced and continues to make forward runs to receive between the lines and both combine and rotate with their starting 10.

The presence of a double pivot ultimately increases his freedom and reduces the defensive responsibilities that would otherwise demand he covers more of the central spaces between the lines, and therefore invites him to prioritise receiving and running into the attacking third – potentially via a decoy movement before withdrawing to receive away from pressure. When his attempts to do so are complemented by direct forward runs from those in front of him or from a full-back, his ball-playing ability makes him capable of finding their movements.