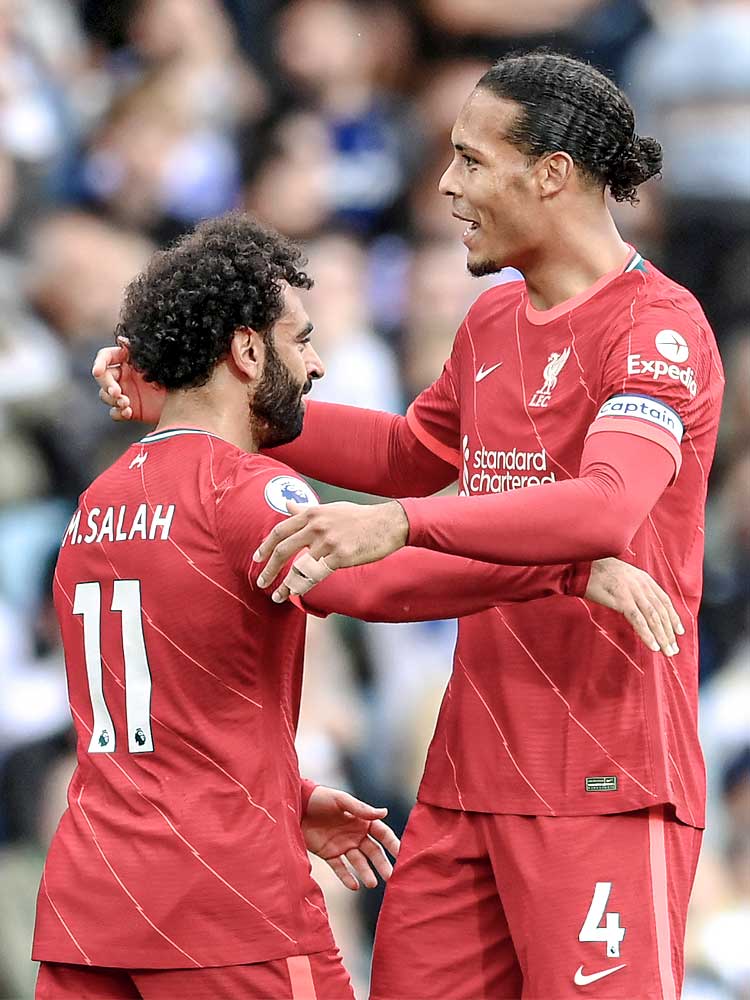 Liverpool recorded a convincing victory at Leeds to ensure they remain joint-first in the Premier League with rivals Chelsea and Manchester United. They took the lead in the first half when Mo Salah scored his 100th Premier League goal, and in spite of Harvey Elliott suffering a dislocated ankle on the hour mark, extended that lead in the second with further finishes from Fabinho and Sadio Mané. The win ensures that like Chelsea and United, Liverpool also have 10 points from four games and a positive goal difference of eight. Leeds substitute Pascal Strujik was given a straight red card for the challenge that led to Elliott's injury. "We'll play without him, but we will wait for him as well because he is a top player," said Liverpool's manager Jürgen Klopp. His opposite number, Marcelo Bielsa, said: "We were overcome in nearly all aspects in the game. We did not impose ourselves and the result was fair."

Leeds were organised by their manager Marcelo Bielsa into a 4-3-3 formation led by Patrick Bamford. Their visitors, Liverpool, defended with a 4-1-4-1.

Bielsa's team sought to build possession in wide territory, where their full-backs, attacking central midfielders and wide forwards combined around the outward press being applied by Liverpool's narrow forwards. Direct forward passes into the channels contributed to Leeds avoiding the aggressive counter-pressure that existed in midfield, and to releasing their wide players, who broke forwards.

Leeds also made regains deep inside their defensive half and built through central midfield, but those in the centre for Liverpool covered forward passes – especially against those into the more advanced Rodrigo – leading to regains and preventing Leeds from breaking. Fabinho and Thiago Alcântara covered in the centre; Harvey Elliott defended from wide on the right, and between them they were essential in ensuring Liverpool could transition into attack.

During the periods they had established a more convincing grasp of possession, Leeds continued to prioritise wider combinations, when the attacking central midfielder furthest from the ball advanced to support Bamford in occupying Liverpool's central defenders. Stuart Dallas was responsible for attacking through the inside left channel in support of Junior Firpo and Jack Harrison. On the right, Rodrigo supported Raphinha and Luke Ayling.

Their wide forwards dropping into deeper territory drew Liverpool's full-backs forwards, and runs into wide territory from Bamford or forward runs from Dallas and Rodrigo helped them to progress possession; Rodrigo was consistently further forwards than Dallas, who also withdrew to support Kalvin Phillips. Bamford's position between Liverpool's central defenders was also significant in Leeds' attempts to penetrate in behind; he also offered runs through the centre, instead of wide.

With Dallas supporting Raphinha and Bamford in advanced territory on the right, Harrison held his width for lengthier periods on the left before he eventually sought to cut infield in the final third, where Firpo offered overlaps. Tyler Roberts, in turn, supported through the left inside channel, increasing the runs being made in behind.

When they were reduced to 10 men Leeds retained their width, via substitute Daniel James and Raphinha, and Bamford operated from deeper to support Phillips and Roberts in central midfield, from where he and Roberts attacked as a central pairing. Dallas moved to right-back, and supported around and behind Raphinha.

Liverpool continued to press Leeds' full-backs; it was in central midfield, where Bamford was instead positioned, that they occasionally lacked organisation. Leeds' central defenders, or Phillips, therefore received possession under reduced pressure, and proved capable of executing direct passes out to their wide players which, when coupled with direct runs in behind Liverpool's high defensive line, helped Leeds to advance forwards despite their numerical disadvantage.

Jürgen Klopp set Liverpool up into his long-favoured 4-3-3 formation led by Diogo Jota. Their hosts, Leeds, defended with a 4-1-4-1.

Jota attacked as a central striker, but regularly withdrew into midfield, while Thiago Alcântara moved into the left inside channel; Sadio Mané, in turn, then drifted infield from the left to become Liverpool's leading threat through the centre; Mo Salah remained on the right. If Thiago instead held his position, Jota rotated with Mané, who regularly moved into goalscoring positions. Mané posed a threat in behind during moments of transition, when like Salah he made direct forward runs.

When Salah moved infield from the right, Trent Alexander-Arnold overlapped forwards, and Harvey Elliott move over to the right. The fluidity and combinations they offered there had significant creative potential, and were covered by Fabinho who moved across from defensive midfield. Mané and Jota continued to rotate positions on the left, and rolled their direct opponents via individual dribbles. Against Leeds' aggressive man-marking approach, the movements of Mané and Jota helped Liverpool to penetrate through the centre of the pitch; movements and rotations also drew opponents from their starting positions, creating space in midfield to play penetrative forward passes.

It was when Joël Matip advanced into midfield that Salah and Alexander-Arnold combined to penetrate around Leeds' defence before Salah's close-range finish gave them the lead. Liverpool's central defenders and the two-on-one that existed against Patrick Bamford had helped Matip into midfield; their full-backs drew Leeds' wide forwards back into what almost became a back six and, by extension, undermined their potential on the counter. The free central defender was consistently influential when Liverpool built possession in deeper territory, and contributed to those in midfield resisting the aggressive individual presses being applied by Leeds' defensive and midfield lines.

Liverpool continued to threaten down the right, and to create goalscoring chances. Salah's width, Alexander-Arnold's movements, and Matip and Virgil van Dijk moving into midfield without pressure started the majority of their attacks. If Leeds instead pressed Liverpool's central defenders, Thiago and Elliott were under reduced pressure in midfield, and instead found Salah and Alexander-Arnold.

Fabinho scored from the second phase of a corner kick at a time when Leeds had changed to press from further forwards. One wide forward aggressively moved infield to join Bamford in taking Matip and Van Dijk, the relevant full-back moved to take his opposite number, and the man-for-man approach was maintained in midfield. Liverpool therefore sent possession wide at an earlier stage; both full-backs advanced simultaneously, and Jota remained more central. That the freedom of Matip and Van Dijk became more limited meant Klopp's team progressing forwards less regularly. Liverpool's movements also undermined Leeds' attacking potential; by drawing their opponents out of position, when Leeds won individual duels or made regains, they struggled to counter forwards and capitalise on the spaces that existed in the final third.

That aggressive press was abandoned when Leeds were reduced to 10 men. Liverpool therefore had an increased grasp of possession and their central defenders greater freedom, not least because Bamford withdrew to contribute in central midfield, and often used that freedom to switch play into their adventurous full-backs.

Leeds' man-marking approach continued to be applied away from Matip and Van Dijk. Rotations between Liverpool's midfielders creating narrow forward passing lanes, and significant space between the lines for Salah and Mané, who were complemented by Jota increasingly remaining central to link into their forward runs.