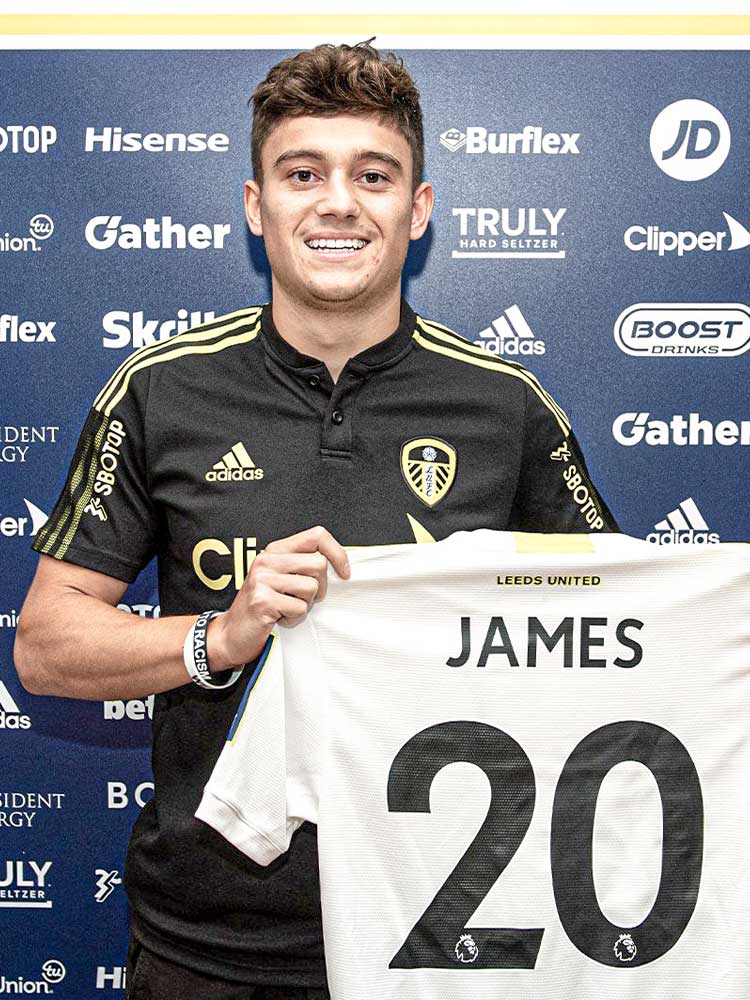 Profile
An impressive season with Swansea in the Championship precipitated Daniel James’ £15m transfer to Manchester United in June 2019. Given he was then only 21, and had experienced just one season of first-team football, it was widely – and reasonably - assumed that James was signed as a squad player. He played regularly from an early stage, however, and started 26 Premier League games in his first season at Old Trafford. For all of their impressive attacking options, it proved only Cristiano Ronaldo's return to Old Trafford that persuaded United to sell him to their rivals and long-term admirers Leeds, for £25m.

“I am a different player," said James. "I had maybe only played half a season the last time I nearly signed here. I have games under my belt at the top level and feel I can add something here."

Tactical analysis
The most noticeable aspect of James’ game is his agility, explosiveness and speed. He is among the fastest players in the Premier League, and moves with the ball at breakneck speed. He is, however, more of a runner with the ball than a dribbler. In order to beat opponents, he pushes the ball past them and uses his pace to burst into space, rather than using intricate dribbling to outfox a defender.

When running at pace, he varies his use of short and long touches superbly. He draws opponents in by moving the ball quickly with short touches, and then has the awareness to spot an opportunity to push the ball forwards with a longer touch. He is intelligent in how he moves the ball past opponents; once he has done so, he uses his body cleverly, getting his hips between the opponent and the ball as quickly as possible so he can retain possession or draw a foul.

He is also capable of changing direction to evade opponents at high speed, and varies between short and long touches to find gaps through which he can run (above). He does so extremely effectively even when running at full speed – which, for James, really is very fast.

His play in tighter areas is becoming more consistent, and when receiving to feet he has the ability to stop the ball dead and shift it away from an opponent before accelerating past them. He does so by dropping his shoulder to disguise his next move; it helps that he is comfortable attacking on both his left and right feet, so defenders can’t try and show him towards a less favourable side. Elaborate dribbling isn’t as much of a strength, but he is improving and will continue to do so as he encounters more high-quality opposition in the Premier League.

When receiving a pass, James likes to let the ball run across his body (above), allowing himself the option of exploding forwards with his first touch. Doing so can present the chance to make quick and sudden progress up the pitch, although not if his direct opponent anticipates what he is trying to do and runs back towards their own goal rather than committing to a challenge. That can then lead to James having to check back, with the result that his attack loses much of its momentum.

James also uses his impressive change of pace to create himself space to cross, shifting the ball to one side and attempting to put it in. When playing from the left, he tends to check back on to his right before crossing to the back post; when he plays from the right he focuses on the space between defence and goalkeeper. However, his delivery suffers when he is on the right – not due to a fault with his technique, but because he can struggle to decelerate after an intense sprint and to retain control of the ball as he crosses. Too often, that leads to his crosses failing to beat the first defender (below).

Role at Manchester United
James featured on both the left and right of United's attack in the 4-2-3-1 Solskjaer favours. Given he is happy to take opponents on both to his left and right, he can cut infield or go around the outside on either wing. He is regardless more effective from the right – a position United struggled to fill adequately during Solskjaer’s reign.

He poses a threat on goal from either side of the pitch. When he plays from the left, that threat tends to come from distance; from the right, he plays higher up and uses his pace to run in behind. The passing and vision of Bruno Fernandes and Paul Pogba was key in releasing James in on goal (below). He is a reasonable finisher when one-on-one with a goalkeeper and, particularly early on at United, showed how effective he can be in front of goal – even if his technique can be a little unorthodox.

When he cuts infield from the left, he is extremely difficult to stop – he only needs to create half a yard of space to shoot, and he is extremely effective at creating that space. He can struggle to set himself to shoot in those positions and regularly miscues when trying to strike with power, however. Closer to goal, he can finish accurately into the far side of the net having cut in.

James fit in to Solskjaer’s United so well because, alongside Marcus Rashford and Anthony Martial, he contributed to forming a lethal counter-attacking unit. Rashford and Martial thrive when they have space to run into, and with his lightning pace James is no different. United, however, struggled under the Norwegian when they played against teams that defended from deep, and James did not solve that problem. His threat on the break is undeniable and at times has been extremely valuable, but he needs to offer more if he is to fulfil his undoubted potential.