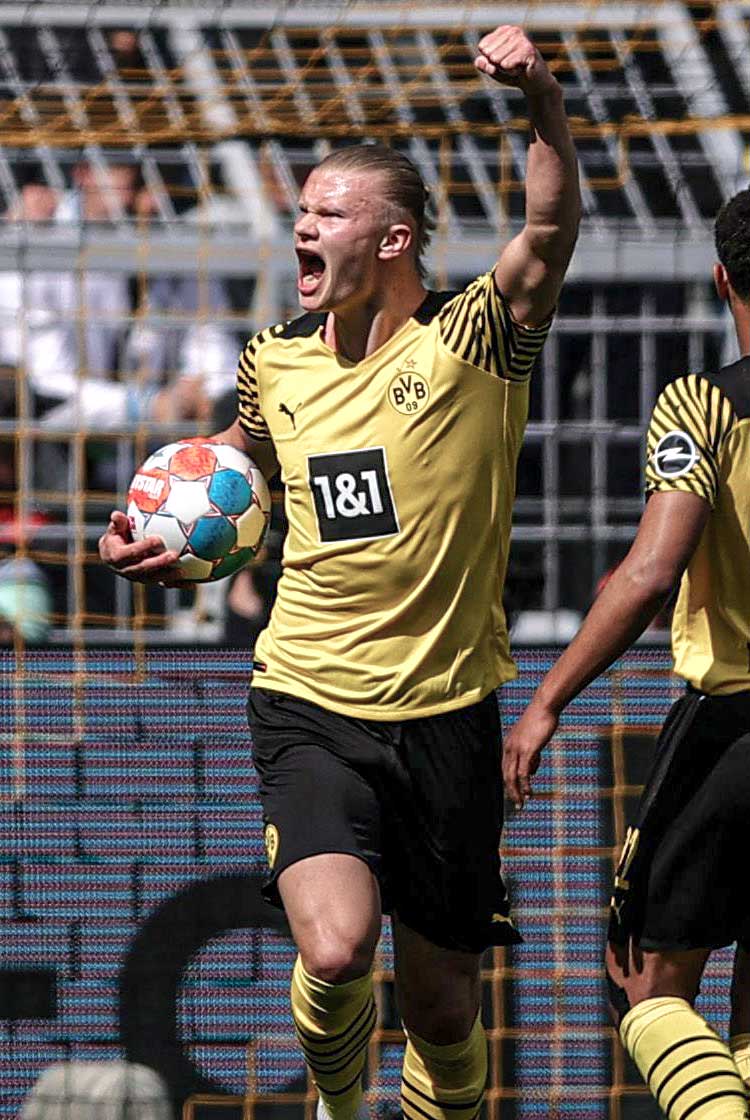 Profile
Erling Braut Haaland’s rise from the ‘Manchild’ who made his senior debut at just 15 years old to world-beater at Borussia Dortmund was quite remarkable. He has always appeared destined for one of Europe's top clubs, so confirmation of his summer 2022 move to Manchester City came as little surprise.

Through goal-filled stints under Ole Gunnar Solskjaer at Molde, Jesse Marsch at Red Bull Salzburg and three different managers at Dortmund, the 6ft 4ins striker became one of the best forwards in world football while still in his teenage years. Aged just 20 in March 2020, Haaland broke the record for the fewest games needed to score 20 Champions League goals, reaching that milestone in an astonishing 14 appearances.

“It was just a matter of time before he scored more goals than me in the Champions League,” said Solskjaer who, with 19 goals, had previously been the competition’s top-scoring Norwegian. “At the age of 20, to achieve the amount of goals he has is fantastic. There’s not many more superlatives anyone can use.”

Tactical analysis
Haaland has all the attributes of a complete centre-forward. He uses his sizeable frame to hold play up effectively and involve others. He has the pace and clever movement to run in behind; he can dribble and create; and he can finish with both feet and his head. For all of the many impressive aspects to his game, though, he is primarily a goalscorer – and he scores them at a simply astounding rate.

His clever movement and lethal finishing make a deadly combination. He happily comes deep to collect the ball to help his team build play, often looking to spread the ball wide for a teammate, before turning and sprinting towards goal (below). He sometimes comes so deep that defenders will not follow him. When this happens, he has has the awareness to turn on the ball and create from a forward-facing position.

The pace at which Haaland moves off the ball causes opponents real problems. Where others might labour in making a second run if they have been ignored first time around, or may be slow to catch up with play once they have come deep to link, Haaland shows great desire to make another run and get into a goalscoring position. He uses his huge stride to sprint past opponents, and he is so fast that he often overtakes players who have had a significant head-start on him. He is constantly on the move and, as a result, he consistently tests his opponents’ concentration and stamina. Any lapse and he is more than capable of taking advantage.

When playing against a lower block in the final third, his movement is a little more subtle. He stays on the move as his team circulates play in midfield, constantly trying to find a position where he is out of the line of sight of both central defenders.

He makes small, sharp movements as he approaches goal. When he spots an opportunity for a teammate to attempt to find him in space, he will change the line on which he is running and accelerate into that space, giving the defender little chance to react (below). Those double movements, often combined with a feint away from the ball, make him extremely difficult for defenders to read in those all-important moments close to goal. This plays a huge part in him scoring so frequently, and is something that should make him well-suited to Manchester City's football under Pep Guardiola.

He uses his body well when playing with his back to goal, protecting the ball effectively as he tries to bring it under control. Given he can use his strength to secure possession when under pressure, he is also effective in providing his team’s defenders with some respite following a clearance.

Haaland's finishing is his greatest strength, however, and he scores goals from all over. The speed with which he shoots offers defenders little time to adjust, and he can generate jaw-dropping power on his shots with little backlift. He also rarely overplays when he is inside the area. The combination of his conviction in front of goal, his technique, and his sky-high confidence makes him a truly exceptional goalscorer.

This positioning pushed the opposing centre-backs deeper, with Dortmund always using at least one number 10 – and often two – who aimed to get on the ball between the lines. Haaland’s positioning away from the ball and movement in behind created space for the number 10s to receive and combine with advancing pivots and players out wide.

Number 10s Julian Brandt, Giovanni Reyna and Marco Reus benefited from Haaland’s height and movement into the penalty area. Once any of these players or a wide player got on the ball, Haaland would then provide a target inside the penalty box. Dortmund often looked to build through the inside channels to get into a position to play cut-backs or low crosses into the six-yard box (above) – something Manchester City excel in.

With Salzburg, Haaland was paired with either Patson Daka or Hwang Hee-chan – who both also made moves to the Premier League – in a 4-4-2. Haaland linked well with the wide midfielders, who moved inside into temporary number-10 positions. Further forward, with his strike partner also providing runs in behind and dragging the opposition centre-backs around, Haaland found more space in the penalty area (below).

It is far from the strongest part of his game, but Haaland can link play impressively. He rarely drops as deep as a centre-forward like Harry Kane, but he has proven his ability to hold play up against top-level central defenders. He uses his body to protect the ball and delays releasing it until Reus, Brandt, Reyna, Thorgan Hazard or Jude Bellingham has made a run to support him from midfield (below).

Haaland's creativity is most apparent when he drifts into the left inside channel. His primary aim is always to get a shot off, and he will shoot across goal with his left foot, but he also has the vision and skill to pick out a delayed run from midfield in the centre. His ability to carry the ball at pace also helps create for others, especially on the counter-attack. Accurate long passes from deep to the left flank can swiftly put him in behind; City players like Ederson and Rúben Dias may be able to put Haaland's pace and movement to good use.

Jesse Marsch's Salzburg were more of a threat on the transition than the Dortmund sides Haaland played in, and his direct forward runs – both on and off the ball – were effective, especially when he was paired with a second centre-forward. He would draw defenders toward the ball, creating space for his strike partner to run in behind.

Haaland has not yet played for a top-level, possession-based team, so it will be interesting to see how he adapts his game under Pep Guardiola. The talent is certainly there for him to make the move a success, and there are few coaches better than Guardiola for Haaland to learn from. They could well take City to new heights together.