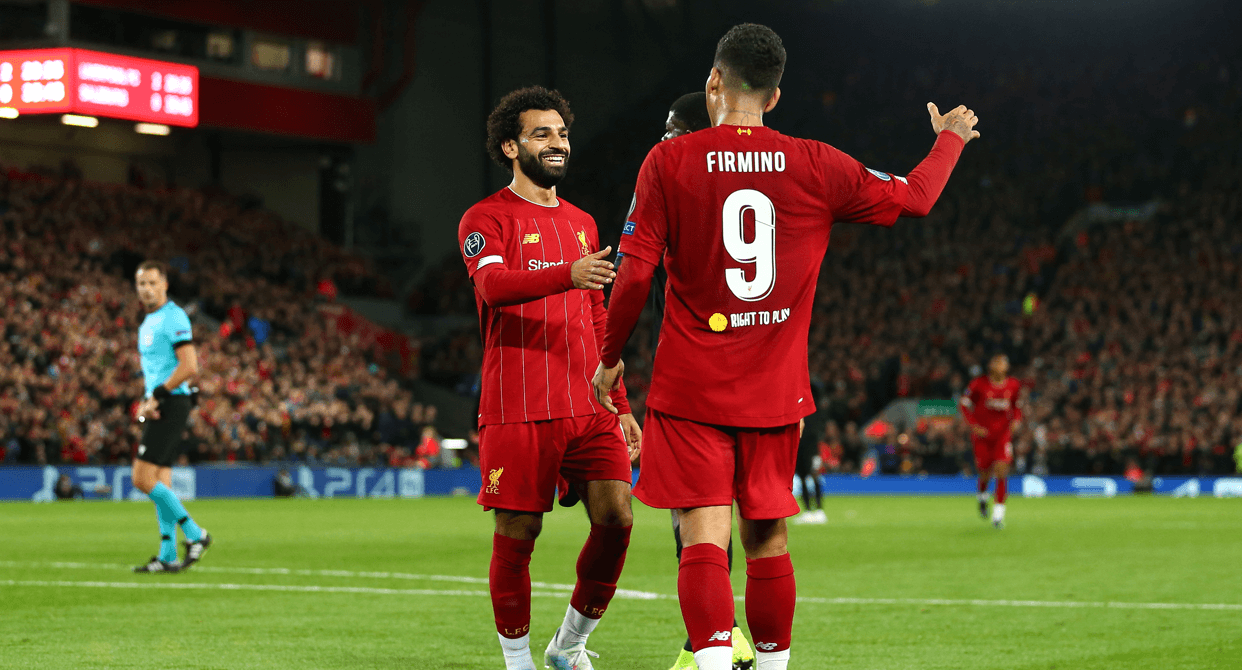 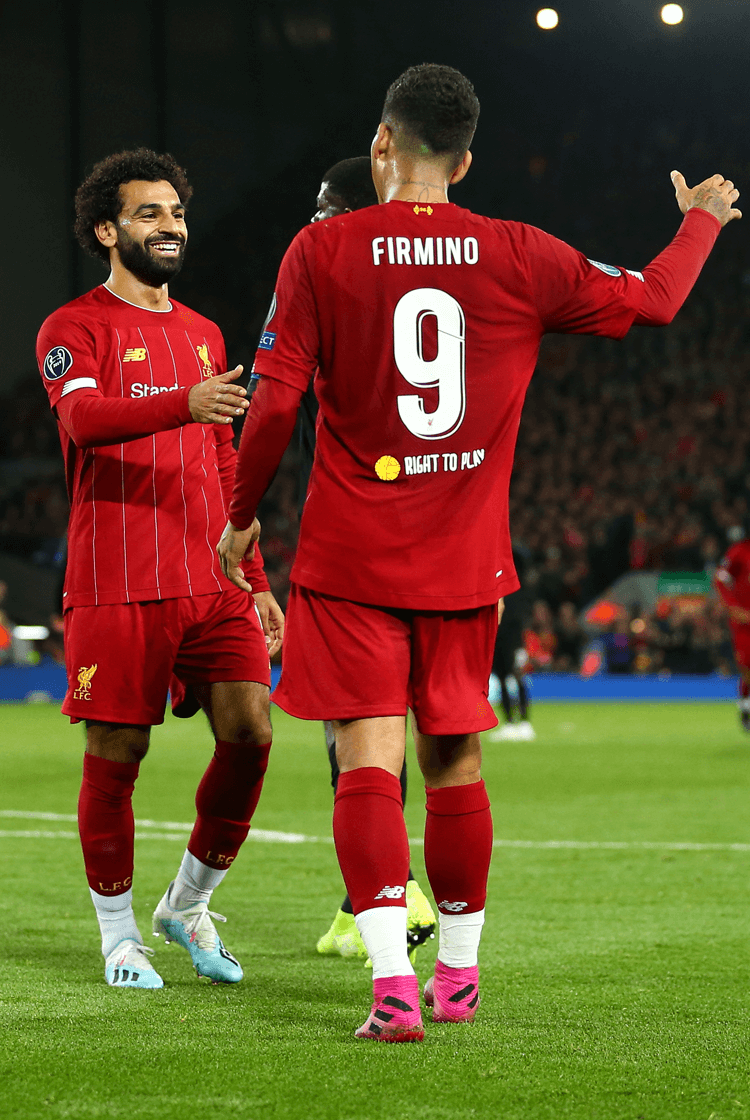 Liverpool resisted an impressive recovery from Red Bull Salzburg to eventually secure their first victory of the new Champions League season. Jürgen Klopp’s men raced into a 3-0 lead through goals from Sadio Mané, Andy Robertson and Mo Salah, but by the hour mark Salzburg were level following finishes from the impressive Hwang Hee-Chan, Takumi Minamino and the prolific Erling Braut Haaland. It took a further goal from Salah to secure victory, and ultimately avoid another damaging loss of points, following their opening-game defeat at Napoli. Despite the defeat, Salzburg became only the fourth team – after Chelsea, Barcelona and Real Madrid – to score three times at Anfield in a Champions League fixture. 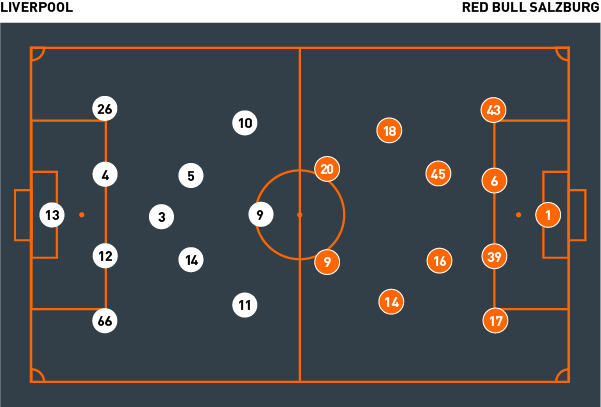 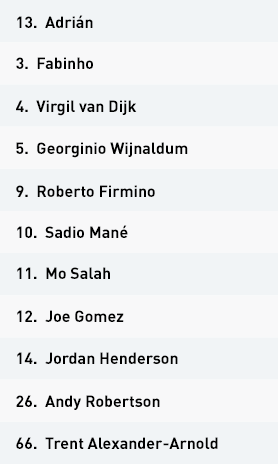 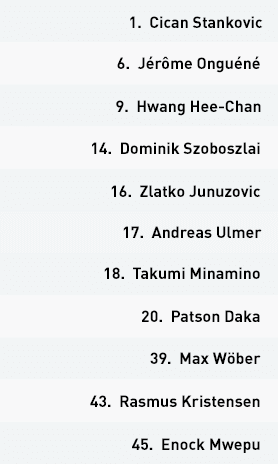 Jürgen Klopp again organised Liverpool into a 4-3-3 formation, in which Jordan Henderson and Georginio Wijnaldum played in front of Fabinho in midfield. They dominated possession during the opening 30 minutes and played through Salzburg with relative ease, largely via their full-backs and wide attackers Mo Salah and Sadio Mané, who made consistent movements inside.

The hosts swept possession across the pitch with short, sharp diagonal passes; each triggered a further forward run on the outside ahead of the ball, to encourage the next, and it was this that created a fabulous second goal created by Trent Alexander-Arnold for Andy Robertson. They also sought rotations in wide areas to create overloads against Salzburg’s wide midfielders; lone forward Roberto Firmino would withdraw into midfield to create a further dilemma for the visitors, particularly when possession travelled wide.

Wijnaldum often adopted a position at left-back to encourage Andy Robertson to overlap him and create the desired two-on-one. The defending right-back’s reluctance to press him, owing to the threat posed by Mané, meant Robertson having time and space – and with quick combinations Salzburg’s defensive line were consistently beaten. If possession was wide with a winger or full-back, Firmino checked away from that defensive line towards the ball, which was played to him to while a teammate made a run beyond the defensive line before receiving from the Brazilian.

The visitors later adopted a four-diamond-two, so Liverpool also had to adjust. Their switches of play became lengthier, in an attempt to expose the visitors’ narrow diamond; this initially led to two-on-ones out wide, but Salzburg’s tireless running gradually negated those. Klopp’s team also lacked movement in midfield, encouraging that diamond to remain narrow, until James Milner’s introduction as a substitute; the veteran’s mobility drew a defender and freed up Alexander-Arnold beyond midfield. When Divock Origi also came on, Liverpool switched into a 4-2-4, as Klopp often does if they are not winning, with Origi and Mané playing wide of Salah and Firmino. This gave them a further point of attack, encouraging his full-backs to advance and leading to goalscoring chances close to goal.


Salzburg started in a 4-4-2 shape when out of possession. They attempted to pressure Liverpool via a mid-block, pressing centre-backs Joe Gomez and Virgil Van Dijk and screening passes to Fabinho, who was usually the free man in a three-on-two overload in midfield. Zlatko Junuzovic targeted Fabinho if Liverpool played to him via a full-back, but after 30 minutes the visitors adopted a four-diamond-two both with and without the ball.

This encouraged a more aggressive press and negated the overload they were confronted with in midfield – and Takumi Minamino, now playing at the peak of that diamond, would instead take responsibility for Fabinho. Their wide central midfielders were particularly influential; they followed their opposite numbers and then switched to Liverpool’s full-backs when required, ensuring the hosts had a more difficult structure to play through, even if they became more vulnerable to switches of play. Their midfield relentlessly covered ground against changes to the point of attack, however, and therefore succeeded in negating many of them.

Red Bull Salzburg were initially organised by manager Jesse Marsch into a 4-2-2-2 formation when they had possession. Enock Mwepu and Zlatko Junuzovic featured as the two defensive midfielders; Takumi Minamino and Dominik Szoboszlai were further forward, while Hwang Hee-Chan and Patson Daka formed the front two.

The visitors struggled to control play, however, and owing to their cautious and patient, out-of-possession approach they had to wait for the appropriate transitional moments to play their attackers in. Even after their switch into their four-diamond-two, they continued to use the same counter-attacking approach – but now the movements of their attackers instead created gaps inside for others.

Daka and Hwang made diagonal runs away from central positions to draw Joe Gomez and Virgil van Dijk; their diamond also distracted Liverpool’s midfielders and encouraged full-backs Rasmus Kristensen and Andreas Ulmer to advance, even if they posed little threat. The visitors actually posed their greatest threat in chaotic moments, instead of through positional build-ups, as they attempted to capitalise on the spaces vacated by the attacks of Liverpool full-backs Trent Alexander-Arnold and Andy Robertson.

Liverpool sought to press Salzburg high, but their opponents’ attempts to play long often undermined those efforts. Amid that direct play, their central defenders attempted to attack the ball; Fabinho offered protection from in front of them, while Jordan Henderson and Georginio Wijnaldum formed a V-shape either side of Fabinho to pursue the second ball on either side. The back four could then cover the spaces behind in the event of a flick-on.

Second balls contributed to chaotic transitions; the hosts applied intense pressure in the direction of the ball to form a new attack and, in transition, tried to force early passes from their opponents when they were out wide. They also delayed attacks via pressure, without committing to attempts to regain, to encourage teammates to recover their positions – particularly once Mo Salah had scored the goal that turned out to be the Liverpool winner at the end of another dramatic European night at Anfield.