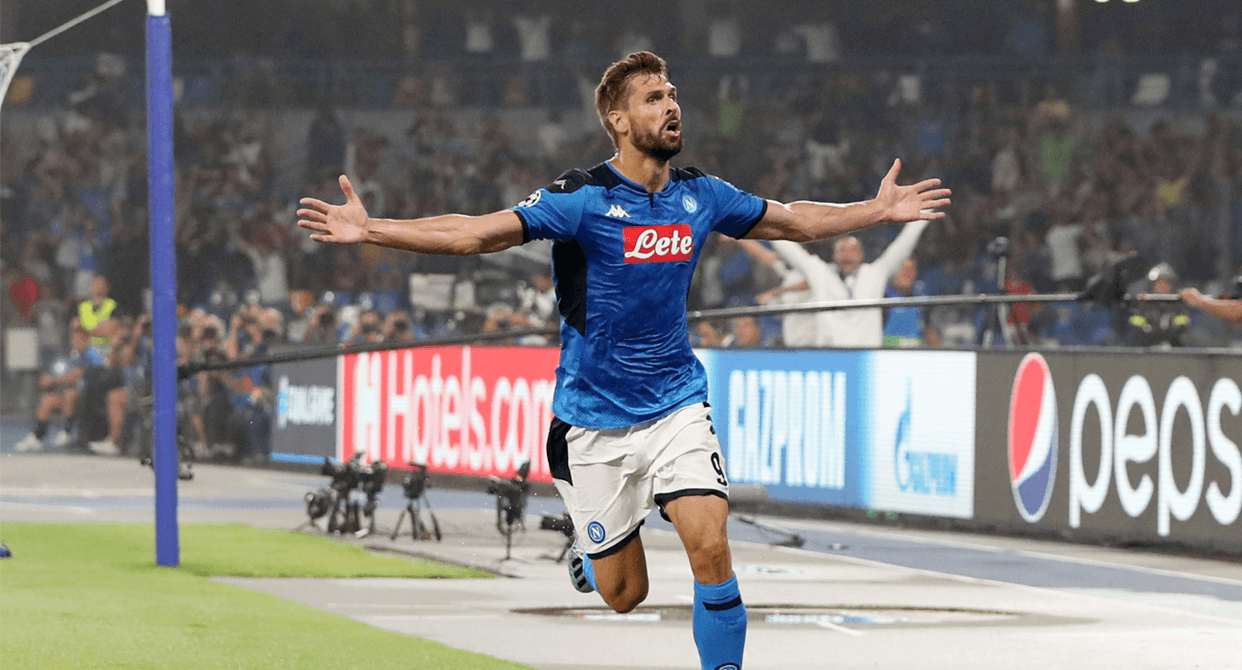 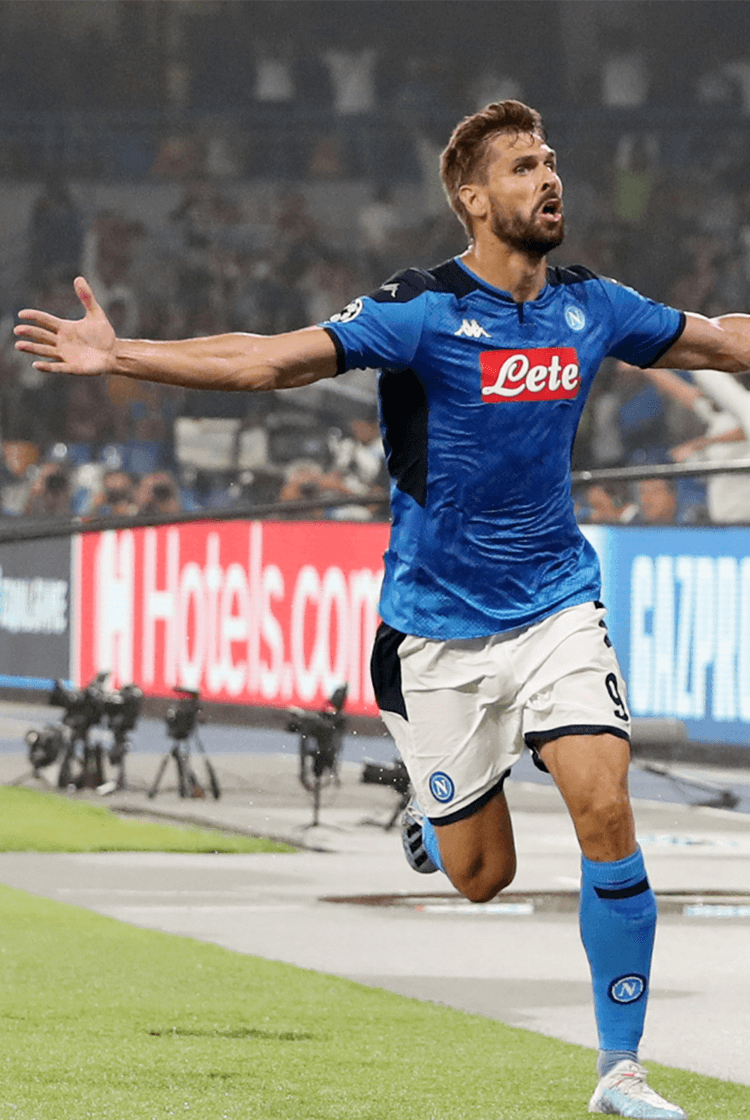 Liverpool made a losing start to their defence of the Champions League when late goals from Dries Mertens and Fernando Llorente secured a victory for hosts Napoli, making Jürgen Klopp’s team the first winners of the competition to lose their opening fixture of the following campaign since AC Milan in 1994. Mertens scored from the penalty spot after Andy Robertson was penalised for a challenge on Jose Callejón; then, in stoppage time, former Tottenham forward Llorente took advantage of a rare mistake from Virgil van Dijk to secure the three points for his new club. Liverpool have lost six of their last eight away games in the Champions League; while Klopp has now lost on his past five visits to Italian teams in the competition. 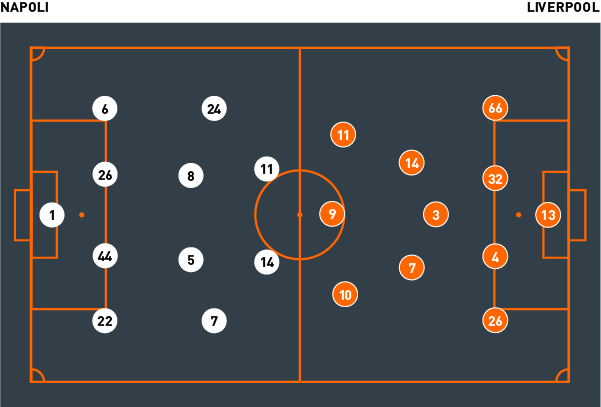 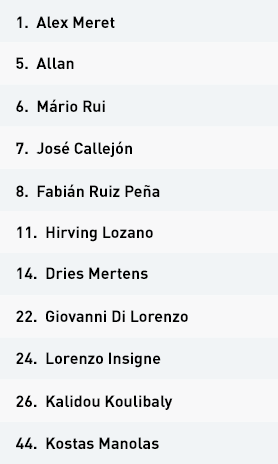 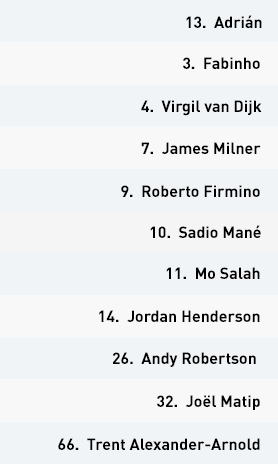 Carlo Ancelotti organised Napoli into the 4-4-2 structure he has largely favoured during his time at the club, and it was early third-man combinations that helped break through Liverpool’s initial forward press. Their four-strong defence had a spare individual against Liverpool’s front three, who similarly struggled to negate the impact of Napoli’s midfield four.

Central midfielders Fabián Ruiz and Allan provided support through the gaps within Liverpool’s attack, and the option of playing around the visitors’ midfield, and this was enhanced by Kalidou Koulibaly’s ability to break lines with incisive passing under pressure. If central midfield was blocked off, Lorenzo Insigne’s movements from left wing, or dropping movements from attackers Dries Mertens and Hirving Lozano, offered an alternative way to advance. Shorter build-ups drew the Liverpool attack, increasing the gaps between units and encouraging Mertens, Insigne and Lozano to continue receiving in larger spaces.

Liverpool retreated when defending, so Napoli advanced their free defender – most commonly left-back Mário Rui. Width was then provided on the right by José Callejón; Mertens’ runs behind Andy Robertson invited Callejón to receive deeper but under less pressure, as they attempted to build around a structure that had become more narrow to counter the impact of Koulibaly’s passing.


In the same way the visitors were largely comfortable when defending Napoli’s deliveries into the penalty area, Koulibaly and Kostas Manolas resisted the threat posed by the attempts of Mo Salah and Sadio Mané to run in behind; only when Roberto Firmino withdrew into midfield did they encounter a positional issue. They confronted this with a deeper block that limited their attacking potential, with Mertens and Callejón respectively tracking Trent Alexander-Arnold and Robertson.

A higher front line meant Napoli later adopted a 4-2-4, but the introductions of Piotr Zielinski and Fernando Llorente for Lozano and Insigne robbed Napoli of their balance and invited Liverpool to attack. The hosts were restricted to direct, disorganised transitions that had little threat with both Robertson and Alexander-Arnold now staying deeper for Liverpool. Without a generous penalty decision and a very rare error from Virgil van Dijk, they would have ended the game with only a point.

European champions Liverpool set up in Jürgen Klopp’s favoured 4-3-3 structure throughout, and built on the single pivot provided by Fabinho operating between Napoli’s front two. Their higher press unusually struggled to recover possession, because Napoli regularly found a spare individual to pass to – so they moved into a more compact mid-block focused on restricting their opponents’ attempts to play through the middle.

Mo Salah and Sadio Mané immediately offered an outlet, but until Roberto Firmino offered support further forward they were too regularly limited by the hosts’ powerful central defence. Central midfielders James Milner and Jordan Henderson regularly moved to cover for their teammates advancing from full-back, but Trent Alexander-Arnold had to play with greater caution against the transitional threat of Lorenzo Insigne. That Andy Robertson continued to attack forced Milner to cover for him, so it took Firmino withdrawing before they could create their desired central overload.

Even as they attempted to press the Napoli defence, the classy Kalidou Koulibaly and Kostas Manolas regularly found a way through that pressure – often via a third-man bounce offered in central midfield. If the Reds applied a more patient press, the ball was forced back to goalkeeper Alex Meret, at which point greater aggression led to their first regains higher up the pitch with the spare defender now harder to access.

Salah briefly played wide to discourage the excellent Mario Rui from advancing from left-back, with Firmino and Mané then operating as a front two. The introduction of the more mobile Georginio Wijnaldum for Milner encouraged the Liverpool attackers to again play more expansively and create spaces for Wijnaldum and Henderson through the inside channels.  When they remained deeper, Salah and Mané could receive out wide, drive inside and combine with Firmino to some success – but, despite their increasing possession and attacking threat, the goal they required eluded them as they fell to group-stage defeat away at Napoli for the second straight season.