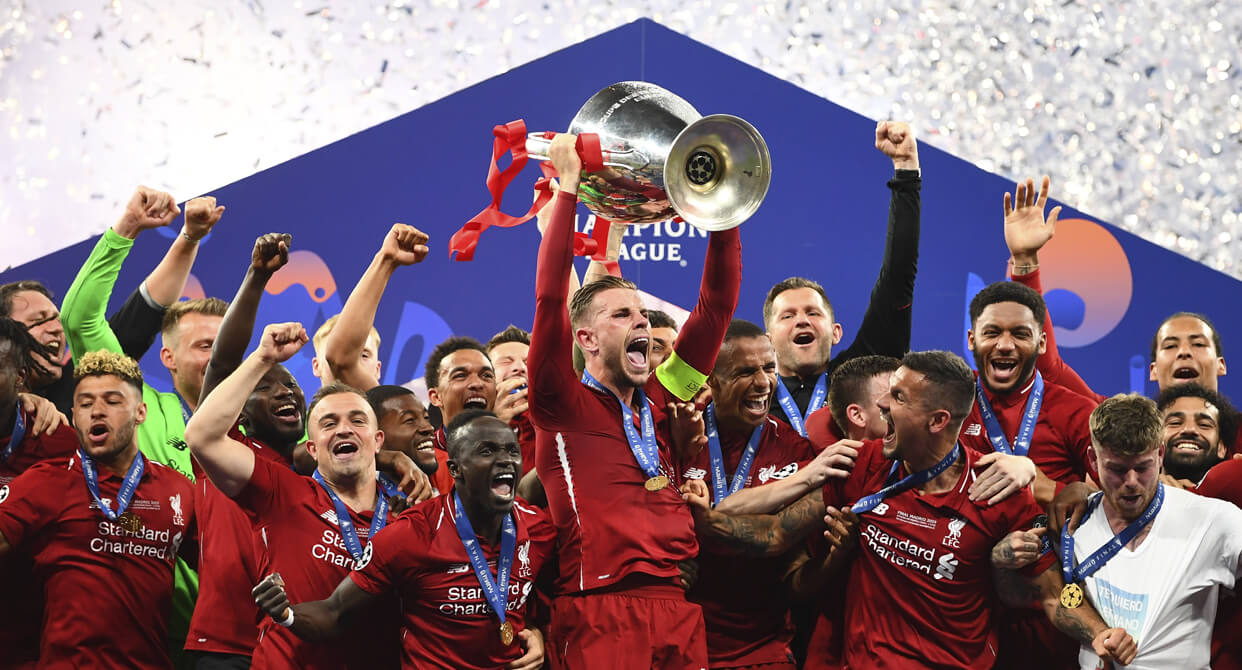 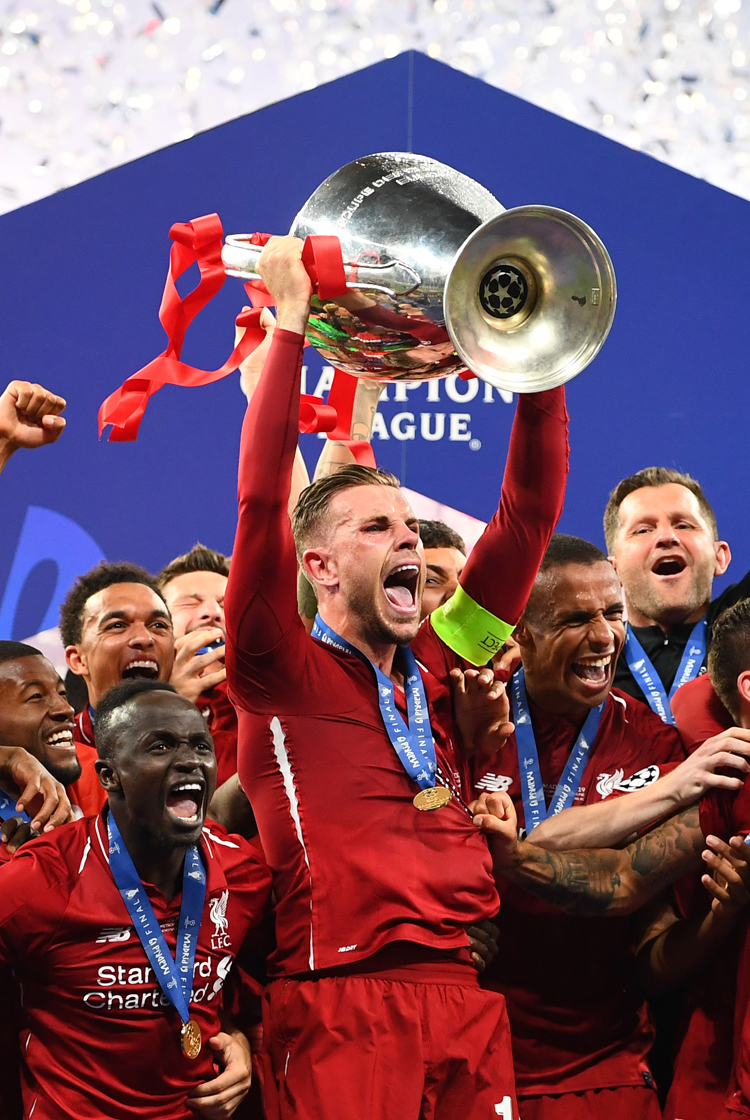 It proved third time lucky for Jurgen Klopp in Champions League finals. Twelve months on from Liverpool’s crushing 3-1 defeat to Real Madrid in Kiev, and some six years after Borussia Dortmund fell to Bayern Munich at Wembley, the German manager finally won European club football’s biggest prize as his side saw off Mauricio Pochettino’s Tottenham in an admittedly disappointing match in Madrid. The whole fate of the game seemed to turn on the first-minute decision by referee Damir Skomina to award the Reds a penalty after Sadio Mane’s cross flicked from Moussa Sissoko’s shoulder to arm. Mo Salah drove the spot-kick home past Hugo Lloris, and from that moment on Liverpool worked hard to nullify any Spurs threat. Pochettino’s side dominated possession, but neither Harry Kane, Son Heung-min nor substitute Lucas Moura were able to find a way past the rock-solid Alisson in the Reds’ goal. With time running out, Liverpool substitute Divock Origi shot hard and low into the far corner to secure the game and a sixth European Cup for the Anfield club. 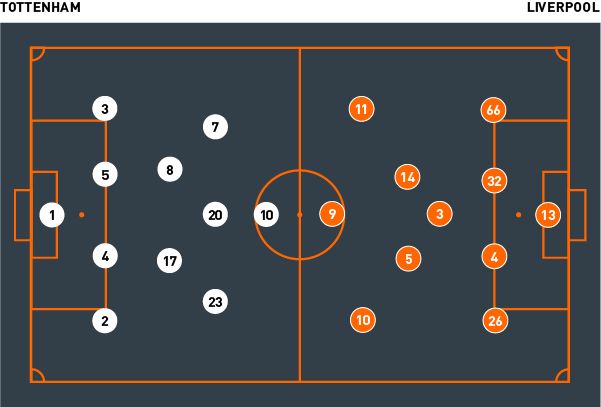 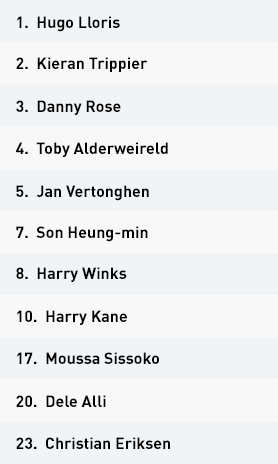 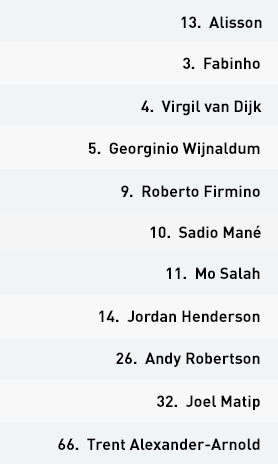 Mauricio Pochettino set Tottenham up in a 4-2-3-1 formation, with Harry Winks and Moussa Sissoko as the two deeper-lying central midfielders. Christian Eriksen, Dele Alli and Son Heung-min were the three attacking midfielders behind Harry Kane, who returned to the starting line-up as the lone striker.

Spurs were chasing the game at a very early stage, and consequently played on the front foot for the majority of the game. They looked to focus the majority of their play between the lines, as this is where they were able to overload the Liverpool midfield – Alli, Eriksen, Son, Winks and Sissoko formed a kind of ring around the Liverpool three of Fabinho, Jordan Henderson and Georginio Wijnaldum. They also had the outball of full-backs Kieran Trippier and Danny Rose on either side, with Liverpool’s out-of-possession structure lacking natural width across the midfield – particularly with Sadio Mane and Mo Salah used in the first phase of the press.

Tottenham had few problems finding their full-backs or players between the lines, but beyond this they struggled. There was very limited space to exploit between Liverpool’s narrow back four; this opened up crossing opportunities, but Virgil van Dijk and Joel Matip were more than equal to them in the centre of the Reds defence.


Spurs tried to create more space out wide for the full-backs by using short vertical passes into the feet of Sissoko and Winks to draw Wijnaldum and Henderson inside, before returning for the centre-backs to play out to Trippier and Rose. They also tried to use their right-sided wide attacker – in the first half, Eriksen – as a second number 10 to keep Andy Robertson inside and free up space outside for the runs of Trippier. This often created a five-on-four situation against Liverpool’s defensive line, but only through aerial balls that Liverpool were able to deal with.

Midway through the second half, Lucas Moura replaced Harry Winks, which allowed Eriksen to join Sissoko – himself later replaced by Eric Dier – in central midfield, in an attempt to utilise the Dane’s extensive range of passing to find players between the lines and out wide. Fernando Llorente also appeared late on, to offer a threat for balls being delivered into the box. But neither Moura nor Llorente were able to make any significant impact as Tottenham’s Champions League adventure came to an end in the final.

Jurgen Klopp set Liverpool up in a 4-3-3 formation in possession, with Fabinho, Georginio Wijnaldum and Jordan Henderson as the three central midfielders behind Sadio Mane, Mo Salah and Roberto Firmino. The Reds’ initial intentions in attack may have been somewhat altered by the penalty awarded in their favour after 24 seconds, providing them with a lead to protect from a very early stage and thus contributing to their very rare overall possession of only 40 per cent.

When Liverpool did look to attack, they often sent long passes from Virgil van Dijk and Joel Matip in behind for the runs of Salah and, in particular, Mane. The centre-backs managed to find the time and space to send these direct passes as they were pressed by Harry Kane alone – so they were able to draw him in before switching to the other, who could step out and deliver the pass. This allowed Liverpool to use the pacy threat of their attackers without having to commit too many players forward and create unnecessary risk in transition.

The Reds found their midfielders man-marked to a certain extent when in possession, but they would often use the dropping movements of Firmino and later Divock Origi towards the ball to create an extra man in midfield. Tottenham were uncomfortable letting one of their central defenders follow the Liverpool forwards into midfield due to the threat of increased space between their defensive unit for Salah and Mane to exploit. As a result, the strikers were able to receive and link up with their attackers, full-backs or midfielders, depending on who advanced with the ball.

Due to the more reserved nature of Liverpool’s approach to the game with a lead to protect, full-backs Trent Alexander-Arnold and Andy Robertson didn’t have the attacking impact on the game that was perhaps anticipated. They were still useful in attacking transitions, however, from where they could drive out with the ball upon regain and pose a threat to the Tottenham defence.


Out of possession, Liverpool also operated in a 4-3-3 but with an occasional switch to a 4-4-2 or 4-5-1 formation, depending on Tottenham’s diagonal switches of play. In the case of the 4-4-2, Mane would drop in to the midfield line to affect the switch to Kieran Trippier, who often advanced and played like a winger; in the case of the 4-5-1, both Salah and Mane would drop in and Liverpool would simply try to restrict space for Tottenham to play through.

When pressing, Liverpool would use Firmino in between Alderweireld and Vertonghen, while Salah and Mane positioned themselves between the centre-back and full-back on their side, looking to block off the passing line into the Spurs full-back. Depending on which side play was on, Henderson or Wijnaldum would push on towards Winks or Sissoko to further restrict the centre-backs’ options.

As a result, Spurs were often forced into long passes that were regularly dealt with by Matip and Van Dijk. The regular outlet for Tottenham was their full-backs, if the cover shadow provided by Mane and Salah was breached. When this happened, Henderson or Wijnaldum would move out to close them down and co-ordinate cover inside for Winks and Sissoko. In truth, though, Spurs failed to offer any consistent threat as the Liverpool defence kept the clean sheet that secured them a sixth European title.