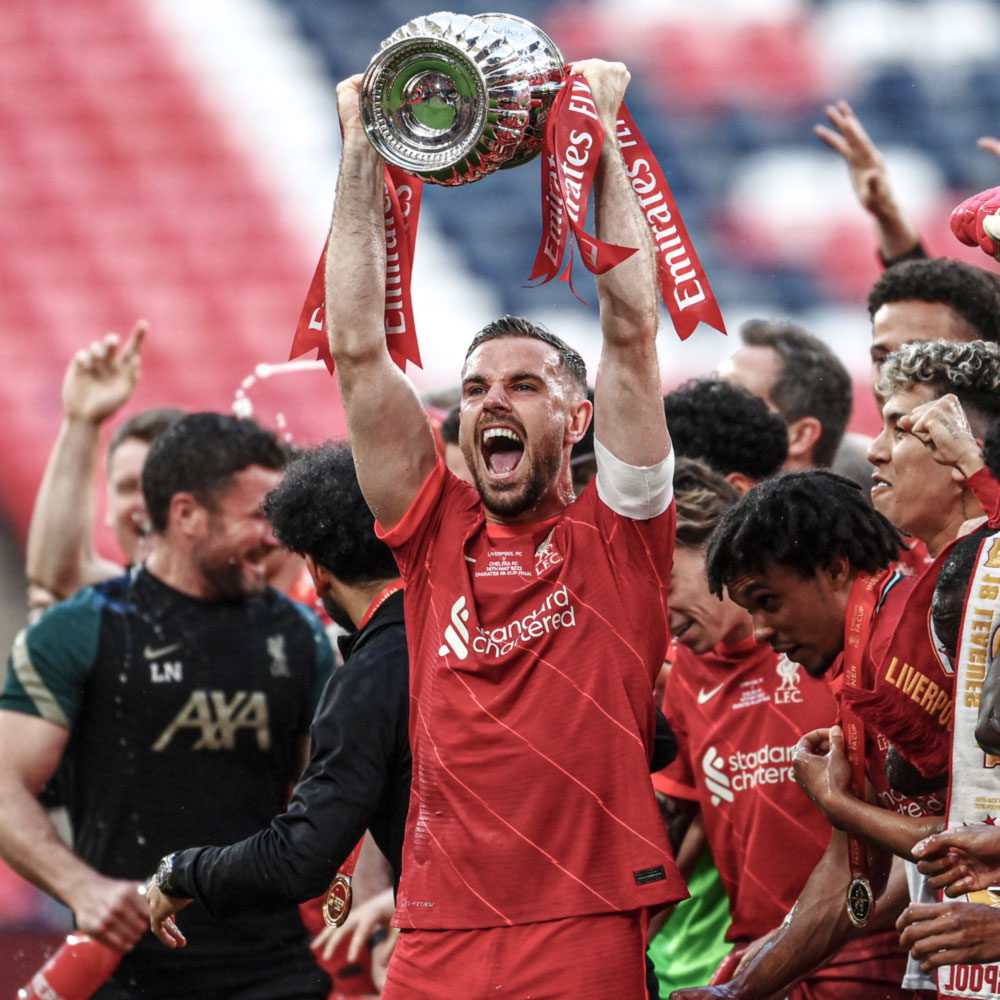 Liverpool won their second domestic cup competition of the season, and their first FA Cup since 2006, by defeating Chelsea in another nerve-wracking penalty shootout at Wembley. For the second time this season, Jürgen Klopp and Thomas Tuchel sent their teams out to play an intense, high-quality cup final that somehow produced no goals. Marcos Alonso, the livewire Luis Díaz and Andy Robertson all hit the woodwork across 120 minutes of enthralling action, with both teams thinking they could and should have won the game before penalties. There, Alisson saved from Mason Mount in sudden death before Kostas Tsimikas – a late replacement for the struggling Robertson – converted the decisive spot-kick to earn Klopp his first FA Cup and Liverpool their eighth.

"It was intense," said Klopp after the game. "Chelsea would have deserved it exactly the same way we did, just like in the Carabao Cup – that's how small the margins are. Chelsea played outstanding, but in the end there must be one winner and that was us today."

Using the wing-backs as outlets

Thomas Tuchel set his Chelsea team up in a 3-4-3 formation in possession, and tried to use wing-backs Reece James and Marcos Alonso as outlets to take advantage of the high-pressing roles of Liverpool’s wide forwards. Chelsea tried to bypass the Liverpool press early where possible, and then use the wing-backs and wide attackers Mason Mount and Christian Pulisic to try to create 2v1 situations in wide areas. Alternatively, they would draw Liverpool over to one side of the pitch (below) before hitting a big switch of play to the far side.

Using the wide attackers to roll inside as number 10s was also important. One of their better outlets was a diagonal pass from half-space to half-space to the spare number 10; they would be available because of the high positioning of the wing-back on that side, and Jordan Henderson’s role of picking up the ball-side number 10. In this situation, Liverpool’s outside central midfielder on that side would still be engaged with Chelsea’s deeper central midfielder.

Pressing from their usual 4-3-3 shape, Liverpool looked to form a prison of sorts around Chelsea’s two central midfielders, Jorginho and Mateo Kovacic, and stop them from playing through midfield (below). This required enough pressure on the ball for the Chelsea player to have as little time to make a decision as possible, while the wide attacker needed to block off the pass into the Chelsea wing-back to prevent five Liverpool players being taken out with one pass. This was the picture that greeted Chelsea for the majority of the first half, and Tuchel’s men had serious difficulty in bypassing the Liverpool structure except for when they played more direct football.

To combat this, as mentioned above, Chelsea rolled their wide attackers inside to make number 10s in what resembled more of a 3-4-2-1 shape. Jordan Henderson picked up the ball-side number 10 (here, Mount). If Chelsea could access the far-side number 10 – in the example below, Pulisic – then they would be able to create a potentially dangerous situation for Liverpool. As the game progressed and fatigue set in, the distances within Liverpool’s structure grew, and gaps opened up for Chelsea to play into. Before that, Chelsea could only really access these passes through playing early and quickly before Liverpool could get set, or through unorthodox means such as scooped or clipped passes that carried an element of risk.

When Chelsea were able to move the ball quickly and evade the initial pressure, they had the opportunity to hurt Liverpool through taking several players out of the game with a single pass. In the example below, Liverpool left-back Andy Robertson had moved inside to affect Mount, which opened up more space for Thiago Silva to find the diagonal ball to James (below). As this was played and Robertson tracked back to cover James, Mount could support inside for the second ball. Both Mount and Pulisic worked well to land on second balls when Chelsea elected to play more directly, and some of their better opportunities came through their two attacking midfielders recognising the appropriate position to take up following a direct pass. As Liverpool had committed so many players high up the pitch to engage in the aggressive press, they were left more vulnerable at the back and Chelsea tried to take advantage of this.

As the game moved into extra time, Chelsea became even more determined to exploit these switches of play and were able to have more possession as Liverpool dropped their intensity. As a result, Liverpool switched to a 4-1-4-1 out-of-possession shape to try to combat these switches of play and stifle Chelsea’s wing-backs. Chelsea were unable to find a way through, and ultimately paid for this when losing the penalty shoot-out.

Jürgen Klopp set Liverpool up in their usual 4-3-3 formation against Chelsea’s 5-2-3 out-of-possession shape, with Jordan Henderson starting as the deepest-lying midfielder in the absence of the injured Fabinho. Chelsea looked to position Romelu Lukaku next to Henderson (below), allowing Mason Mount and Christian Pulisic to press the centre-backs or full-backs on their side. Liverpool looked to provide problems for Chelsea by stretching their stucture as much as possible – whether through central overloads, threatening in behind or, through advancing full-backs Trent Alexander-Arnold and Andy Robertson, maintaining width.

The benefits of the midfield box

Despite starting in a 4-3-3, Liverpool looked to push Naby Keïta up and drop Sadio Mané in from his centre-forward position to create two attacking midfielders at the top end of a box in midfield, with Thiago dropping alongside Henderson behind them (below). This allowed Thiago to get on the ball and dictate play, but it also posed another problem for the Chelsea defence. They were reluctant to follow Mané into deeper areas, particularly as Luis Díaz and Mo Salah were always looking to operate on the shoulders of the defensive line and threaten in behind. The movement of Mané and Keïta often created a 4v2 in midfield for Liverpool; if Mount and Pulisic then looked to help their midfield, this opened up space outside for the Liverpool full-backs. If Chelsea elected to press more aggressively, this strategy would allow Liverpool’s best technical passers of the ball – in the example below, Alexander-Arnold – to establish a forward-facing platform and play dangerous passes in behind. Liverpool’s first-half dominance was largely due to this strategy, although Klopp’s side couldn’t convert their chances.

One of Liverpool’s other key strategies was to miss out units to find players further forward who could set the ball back to forward-facing players (below). Central to this approach was Thiago, who operated deep and picked out passes nobody else could see – but it played into Liverpool’s strategy of having Mané and Keïta play on similar lines to Díaz and Salah (later Diogo Jota) higher up. Establishing this platform further up the pitch would then enable Liverpool to find better-quality passes in behind for forward runners, and it worked numerous times through the game. The eventual winners maintained this approach throughout the game, with James Milner adopting Keïta’s role when coming on in the second half, and Roberto Firmino eventually taking over from Mané – who moved wide to replace the exhausted Díaz. They failed to make any of their chances count, however, and for the second time this season required penalties to get the better of Chelsea in a domestic cup competition.