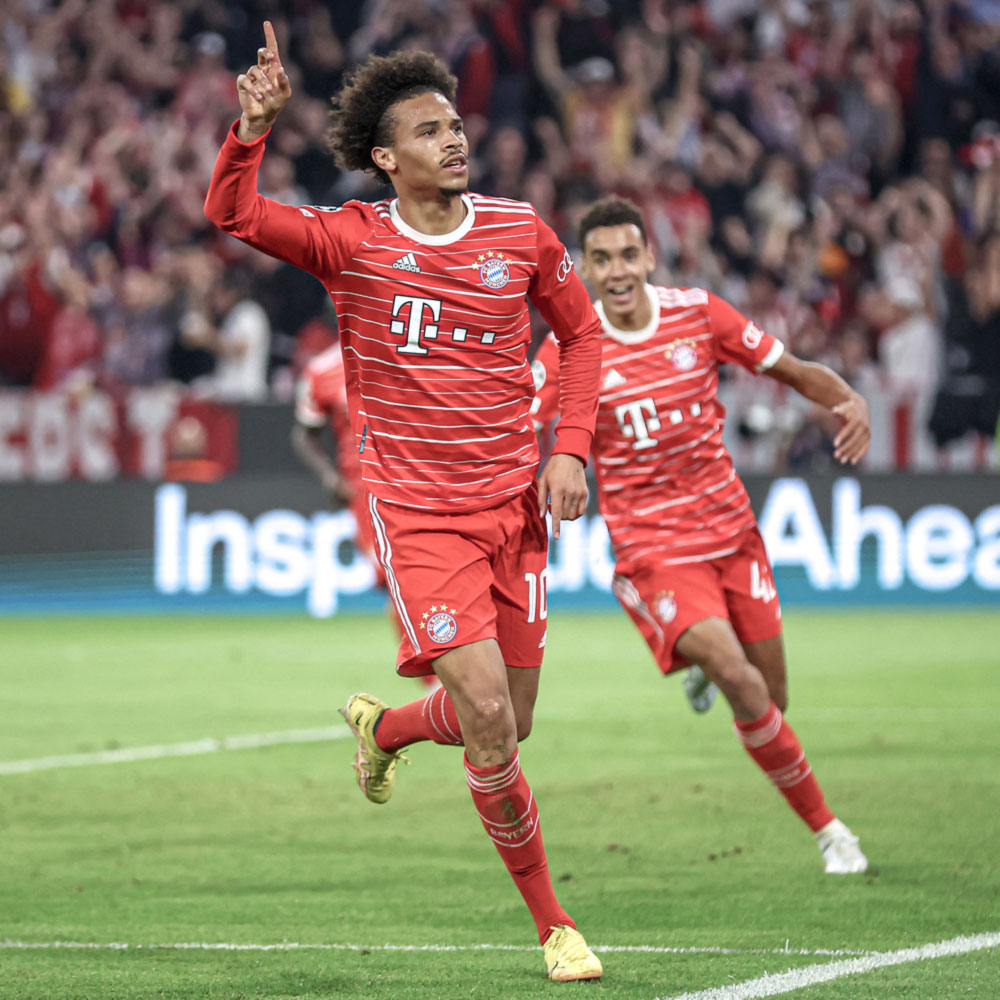 Robert Lewandowski was the headline-maker on his return to Munich. On only his seventh start for new club Barcelona, the Bayern legend missed a string of chances before the hosts made their visitors pay with two second-half strikes. Goals from Lucas Hernandez and Leroy Sané secured the points for Julian Nagelsmann's side, as they maintained their 100 per cent start to this season's Champions League campaign.

"In the first half, Barcelona had the better chances than us — our final ball wasn’t quite there,” said Nagelsmann, who watched a furious Sané depart the pitch after being substituted late on. “Things got much better in the second half, and our efficiency made the difference today."

"I think we were better in many ways – we matched them physically, we dominated the ball," said a frustrated Barcelona manager, Xavi, after the game. "But you can't let them off that much. The feeling is that you dominate, but you lose. Learning is hard. I'm angry. Angry and proud too. We were better, but this is about winning."

Targeting their left side

Julian Nagelsmann set his Bayern Munich team up in a 4-2-3-1 shape, with Thomas Müller as the number nine, Jamal Musiala as the number 10 and Leroy Sané and Sadio Mané supporting from wide areas. From the start, left-back Alphonso Davies looked to get the better of Barcelona right-winger Raphinha and drive forward with the ball. This allowed Mané to narrow (below) and support Musiala inside, with Josh Kimmich and Marcel Sabitzer operating as a reserved double pivot behind. Bayern looked to get numbers in and around Barcelona pivot Sergio Busquets, but in the first half they only really threatened during transitional moments, when they could exploit the space left by Barcelona’s high number eights. Even then, with their front line so narrow, they struggled to find the killer pass in the final third.

When Bayern did manage to force the visitors into a lower block, they lacked the width and subtlety in their rotations to penetrate effectively. Perhaps wary of the threat posed by the Barcelona wide attackers in transition, full-backs Davies and Noussair Mazraoui – an early replacement for Benjamin Pavard – held back and covered inside alongside the double pivot (below). The front four rotated constantly, and weren’t lacking for speed in their combinations. The lack of numbers meant they couldn’t call on decoy movements from teammates out wide to seriously threaten the Barcelona defence, however.

In the second half, Bayern’s wingers held their width earlier and for longer. With the widening support of Musiala, and occasionally also Müller, the hosts combined well around the outside of Barcelona’s central-midfield unit. With further support from the full-backs to complete these wide trios, Bayern now offered the combinations, movements and rotations to isolate and then overload individuals in the Barcelona defensive line (below). Their second goal, scored by Sané after he had rotated inside, gave a superb example of the quality of their combinations coupled with width to stretch the back line. Throughout, however, the double pivot supported underneath, ready to switch play to the opposite winger if necessary.

The impact of Leon Goretzka

Leon Goretzka was introduced for Sabitzer at the break, and gave Bayern extra solidity alongside Kimmich in the double pivot. The pair covered central areas better than the hosts had in the first half, preventing Barcelona from playing vertical passes. And, after Bayern went 2-0 up, they were able to sit back, draw the visitors on and then look to exploit much bigger gaps in behind on transition. Key to this was Goretzka’s ability to make forward runs from midfield after a regain (below); this allowed one or both wide attackers to stay wide and stretch the Barcelona back line, which in turn created more gaps to drive through or slide wide runners in behind. The more Barça pushed for a goal back, the more spaces were available for Bayern to counter into as the hosts secured another important early win in a competitive Champions League group.

Head coach Xavi set Barcelona up in a 4-3-3 shape, with former Bayern striker Robert Lewandowski as the lone forward supported by wide attackers Ousmane Dembélé and Raphinha. In possession, they looked to build around the sides of the Bayern front line. The trios of full-back, number eight and wide attacker on both sides (below) were key to their attack, with Sergio Busquets as the single pivot linking the two centre-backs into the respective triangle ahead of them. Dembélé and Raphinha tended to hold their wide positions, either to receive around the outside of the Bayern defence or make runs in behind. Number eights Pedri and Gavi often received high in the inside channels, where they stretched Bayern’s double pivot in midfield.

As the first half progressed, Barcelona created the better chances – particularly for Lewandowski on his return – but failed to take any of them. They maintained the same attacking approach on their right, but on the left they adapted to push full-back Marcos Alonso forward to overlap into the spaces beyond Bayern’s back line. Dembélé could then narrow to offer strong dribbling presence within the inside channel (below), with Pedri dropping deep in cover. These movements and rotations on the left provided Raphinha and especially Lewandowski good service into the penalty area, in a half Barcelona should definitely have ended ahead.

Shift to a double pivot

Bayern changed the outlook of the game with two quick goals in the first 10 minutes of the second half. Xavi reacted by introducing Frenkie de Jong to form a double pivot alongside Busquets (below), and pushing both full-backs forward in attack. Dembélé moved to the right, with Ferran Torres also brought on to attack from the left around Lewandowski, and Pedri playing as a more central number 10 between the lines. Bayern moved to defend in a low block for longer spells, and if De Jong also joined the Barcelona attacks the hosts could respond with incisive counter-attacks. Bayern’s low block and reinforced double pivot without the ball proved very difficult to break down, with Barcelona creating only one major chance after the changes. That fell to Pedri, who again missed on a frustrating night for the visitors.

One interesting aspect of the Barcelona display was the willingness of centre-back Andreas Christensen to drive forward into midfield, taking advantage of Thomas Müller’s inability to physically match him. This would work to free one of Barcelona’s three midfielders, or offer a direct line into the feet of the front line. In the second half, however, with Goretzka added to the Bayern midfield, these drives and subsequent balls forward were largely negated. Christensen could still connect into the number eight on the far side (below), especially when Busquets was tightly marked, but the team was then forced to build without central penetration into the front line. After Christensen was replaced with 20 minutes remaining, Barcelona’s build-up lacked this central progression. That made their task even more challenging against Bayern’s withdrawn block, as they ultimately failed to even net a consolation.