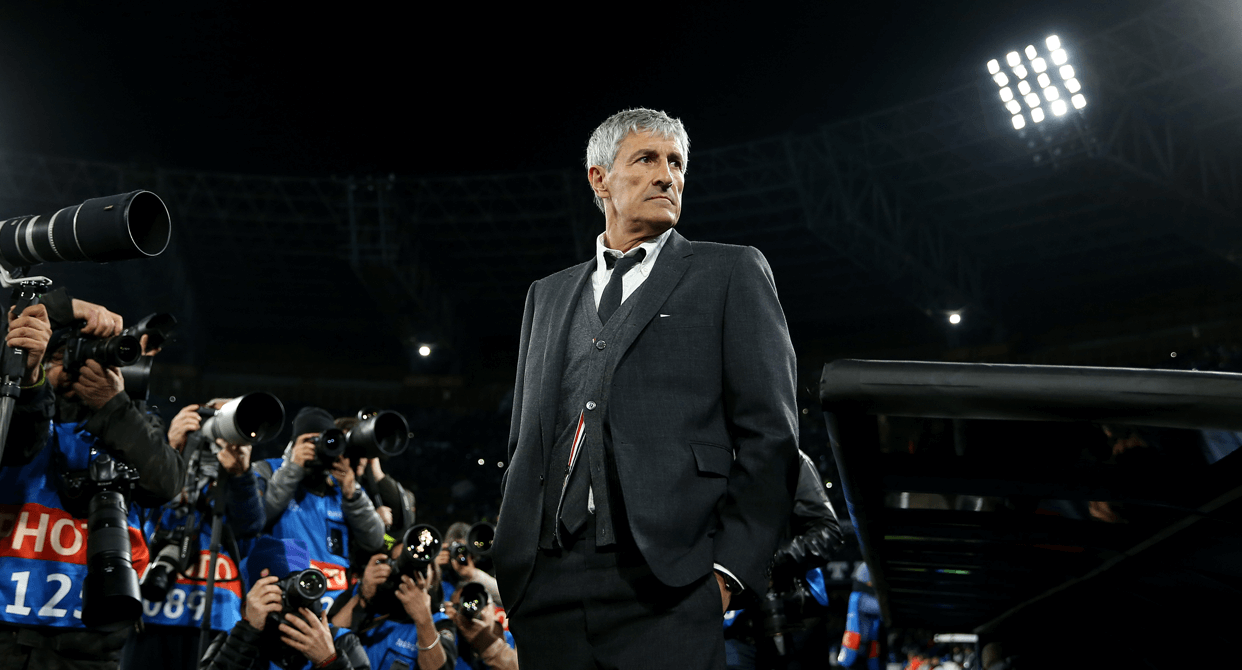 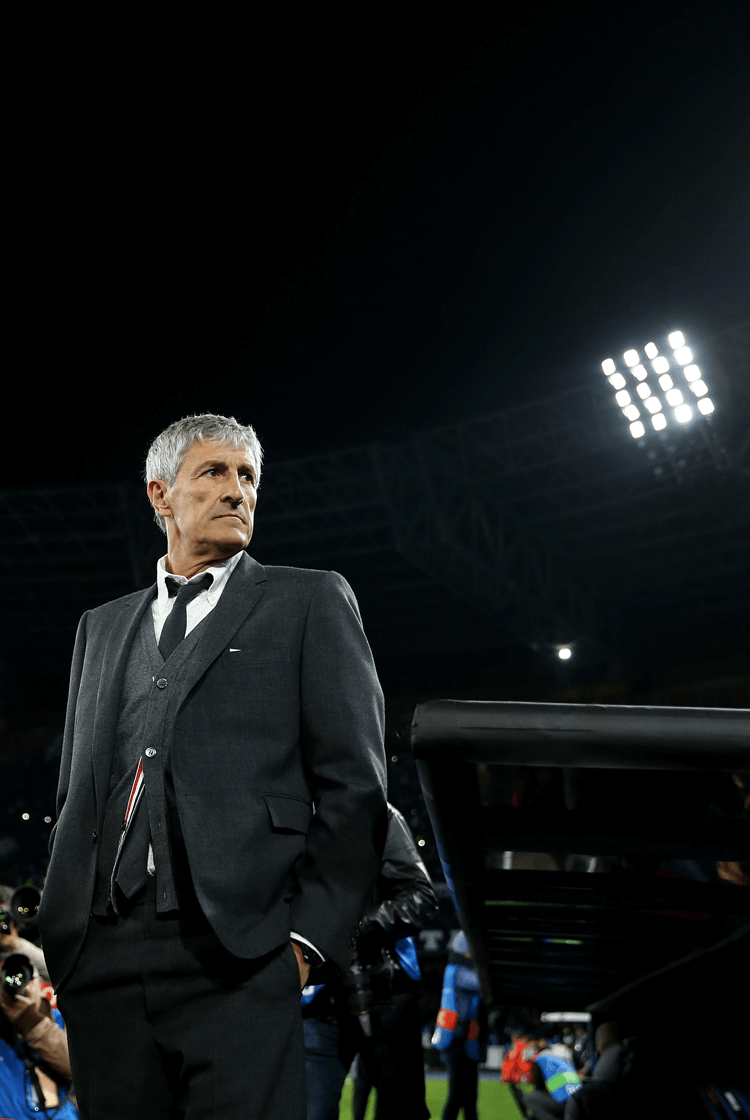 Profile
The appointment in January of Quique Setién, as the successor to the sacked Ernesto Valverde, represented one of the most fitting that Barcelona could have made. At a club that consistently demands it, there was also a sense of excitement. The job of Barca manager was the one he had most sought.

Also once the coach of Las Palmas and Real Betis, Setién previously inspired Betis to a particularly impressive 4-3 victory at the Camp Nou, when his team were widely considered to have beaten Barca at their own game. The former Spain international is perhaps the most committed to a style based on possession and technique of any Barca manager since the reigns of Pep Guardiola and the late Tito Vilanova. He also makes no secret of his admiration for Sergio Busquets and Lionel Messi, and even once said he would have cut off his finger to play for Johan Cruyff, the most influential Barcelonista of them all.

Playing style
Much of the reason Barca were so tempted by Setién largely owes to the philosophy he demonstrated while with Las Palmas and Betis. During his time at both he experimented with 4-2-3-1, 4-3-3, 3-4-1-2 and 3-4-2-1 formations, favoured attacking, possession-based football involving numerous short passes and even, occasionally, inside-moving wingers to encourage dominating the central areas of the pitch and a goalkeeper as an additional outfielder (below). Both teams also often played short passes, before exploiting spaces beyond their opposing defence with balls over those defences.

Opponents were troubled when they attempted to press in advanced territory against them, because of those goalkeepers’ contributions, which further forward also contributed to central defenders advancing into midfield, particularly in the 3-4-1-2 employed at Betis that offered increasing numbers in attack. When instead attempting to build in deeper territory, opposing defences would also be under increased pressure, owing to the consequent inability of those in front of them to threaten in the final third.

There has also been the noticeable improvement in individual players – particularly goalkeeper Pau López and midfielders Giovani Lo Celso and Fabián Ruiz, each since respectively signed by Roma, Tottenham and Napoli – and the potential to defend in a more reserved mid-block. Similarly appealing may even have been the reality that his reign as Betis manager concluded with a 2-0 victory over Barca’s rivals Real Madrid, at the Santiago Bernabéu.

The challenge
Ernesto Valverde became the first Barca coach since Louis van Gaal in 2003 to be sacked mid-season. If results were never disastrous – his two full seasons there concluded with them winning the Liga title – criticisms surrounding the style of football he encouraged, an over-reliance on Messi, and the inability to inspire the finest from expensive, talented signings Frenkie de Jong and Philippe Coutinho, persisted.

A sense of frustration also existed over Barca surrendering three-goal, first-leg leads in the Champions League against Roma and Liverpool, when they otherwise may eventually have been crowned champions of Europe. As was demonstrated on both of those occasions, their away form under their then-manager also rarely truly satisfied.

In the 12 fixtures since his appointment, Setién has overseen eight victories and three defeats – all of which came away from the Camp Nou. Similarly to as was seen under Valverde, clean sheets have also been difficult to consistently secure – there have been only four.

Instant impact
It is perhaps this that contributed to their new manager abandoning his early attempts to adopt a back three for Barca’s long-favoured 4-3-3, built largely upon rotations and movements in central territory to encourage advancing possession, and overloads. Their overlapping full-backs have been complemented by him attempting to bring greater balance to his midfield (above) in the same way he once did at Betis.

Barca have recently adopted a double pivot, in which Sergio Busquets remains prominent and has been encouraged to use his often overlooked ball-playing ability (below), and De Jong has been given more responsibility. Under Valverde the Dutchman was often used in too advanced a position, undermining his ability to exert the influence he so regularly did while with Ajax.

He is often at his finest during the earliest phases of possession, and when driving forwards from deeper territory – even when he is under intense pressure – ultimately freeing up more advanced teammates, and potentially offering another number in attack with a later, supporting run. His abilities during defensive transitions are also significant.

A regular feature of Setién’s philosophy could also be seen at Ajax when De Jong remained there – the midfielder often initated a counter-press and advanced pressure, towards possession. Where Barca were previously more conservative while defending, De Jong’s willingness to apply that pressure invites their advancing full-backs to recover their defensive positions, and therefore them offering greater numbers in defence.

As attacking midfielders the manager has also used both Arturo Vidal and Ivan Rakitic when he has sought a penetrative threat, and Arthur Melo when he wants greater control during build-up phases. Where Vidal and Rakitic can pose a threat in limited spaces, and the ability to duel for possession and to compete for crosses and second balls, Arthur appears the likelier long-term solution, particularly if, as expected, De Jong eventually succeeds Busquets as Barca’s deepest-lying central midfielder.

A further, consistent feature since his appointment has been the commitment to penetrating to between opposing central defenders and full-backs, as his Las Palmas team once so memorably did. If Alba and Messi have long done exactly that, there has been a more consistent effort from those deployed towards Barca’s right, largely owing to the rotations they have offered from the different defensive structures that lead to different attacking shapes. Barca have defended in a 4-4-2, a 4-3-3 and a 3-5-2, and in the former, particularly, displayed an increased versatility in the final third.