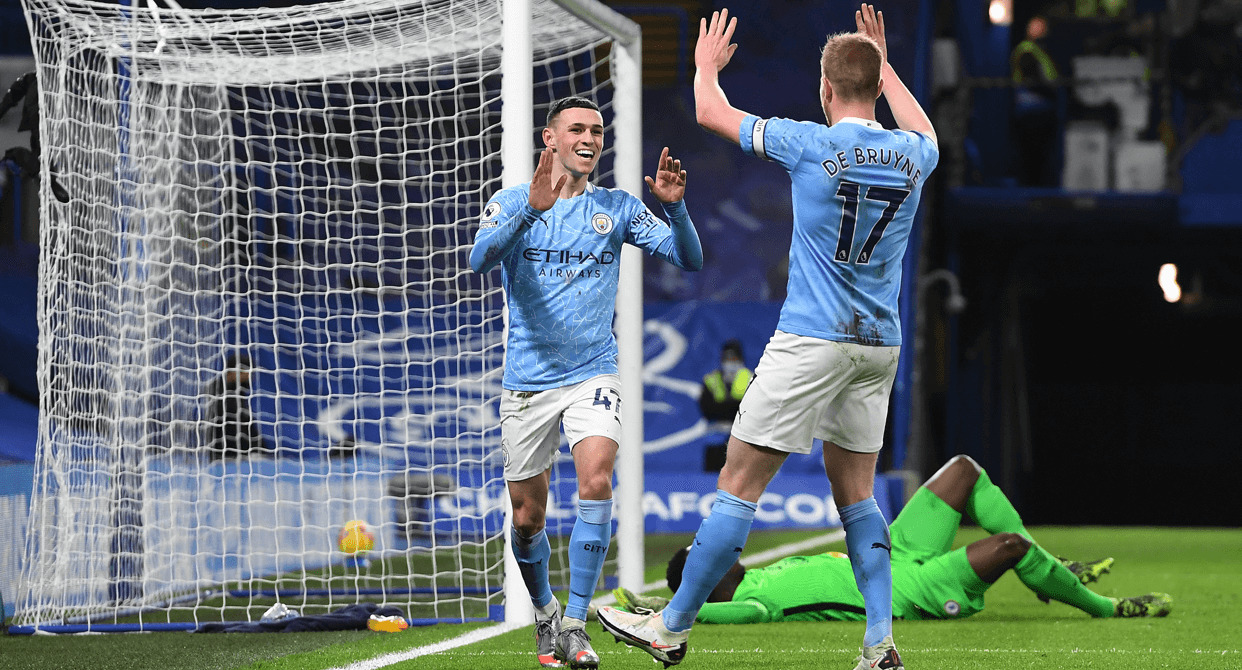 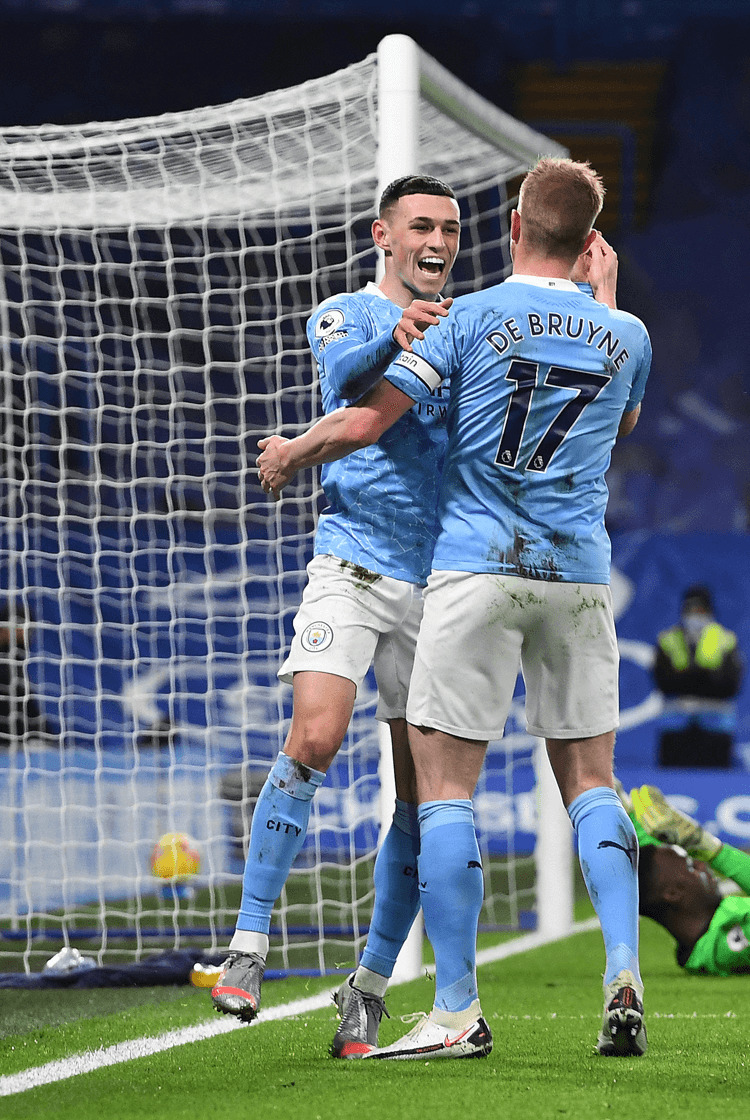 Manchester City again demonstrated their potential as contenders for the Premier League title by outclassing Chelsea, who suffered a fourth defeat from their past six fixtures, at Stamford Bridge. Despite being without numerous first-team players as a consequence of a Covid outbreak they impressed throughout and, through Ilkay Gündogan, Phil Foden and Kevin De Bruyne, scored three times in the space of 16 minutes in the first half. Callum Hudson-Odoi's finish in second-half stoppage time proved only a consolation for the hosts. Frank Lampard said: "We made mistakes, individual mistakes, and didn't get close enough. They punished us. (This) was painful in the first half because their level of play showed where we need to aspire to be. In the second half I saw a reaction, but the work needs to be done." His opposite number, Pep Guardiola, said: "We played really well. We were back like we were two or three seasons ago. An important win at Chelsea away." 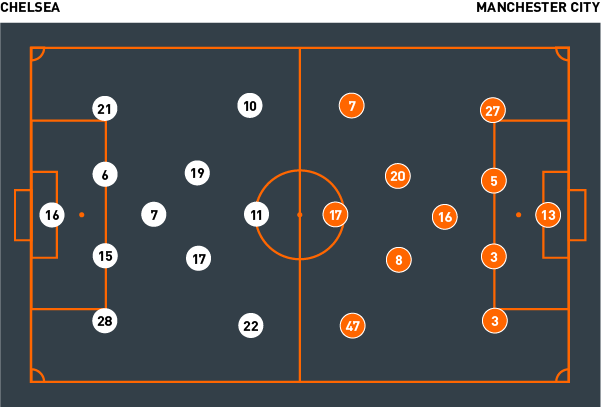 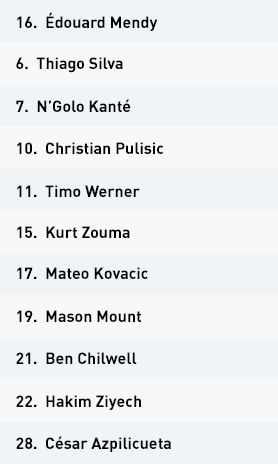 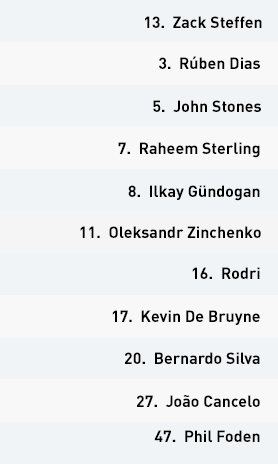 Chelsea were organised by their manager Frank Lampard into a 4-3-3 formation led by the front three of Hakim Ziyech, Timo Werner and Christian Pulisic. Their visitors, Manchester City, defended with that same shape; Rodri sat at the base of their midfield.

City sought to press Chelsea high up the pitch, and had defined roles when doing so. De Bruyne occupied N'Golo Kanté to prevent Chelsea from playing through their deepest-positioned central midfielder, and Raheem Sterling and Phil Foden most commonly pressed Chelsea's central defenders on their outside shoulder to screen passes into their full-backs and force them to play through the centre of the pitch.

Ilkay Gündogan and Bernardo Silva prioritised Mason Mount and Mateo Kovacic, and favoured positions on their outside shoulder to, similarly, discourage possession being played to Chelsea's full-backs. Behind them, Rodri covered the spaces behind Chelsea's midfield that were targeted by their front three, who withdrew into deeper positions in an attempt to receive between the lines. If one of those in front of Rodri had been drawn into pressing further forwards, he would instead move to take one of Chelsea's midfielders, ultimately contributing to a level of organisation that made it difficult for their opponents to build attacks.

Lampard's team only really succeeded in doing so when their goalkeeper Édouard Mendy played aerial balls to their full-backs, because in doing so he bypassed City's wide forwards. For all of his defensive qualities, Kanté's positioning at the base of midfield also undermined Chelsea's approach. From that same position Jorginho offers considerably more quality when building play; it was only when Kanté moved to operate as a false full-back or false central defender in the second half that he challenged City. He otherwise proved straightforward for De Bruyne to mark.


There were regardless some isolated passages of play in which they offered more, when Gündogan or Silva were drawn to press one of their central defenders, and Pulisic, Werner or Ziyech withdrew into a deeper position before Rodri could react, but those passages were rare. Ziyech and Pulisic regularly moved infield to operate between the lines, their full-backs would advance outside of them, and Werner would target potential spaces between City's defenders that had been created by his teammates' positioning. City succeeded in negating the majority of those efforts by preventing the most incisive passes that could have been played.

Werner moved into midfield during phases of building possession to help his teammates to progress through City's structure before possession was sent wide to their full-backs, who were often free to receive. When Billy Gilmour was introduced Chelsea then began to vary the identity of their deepest lying midfielder, and in turn occasionally left City's structure unbalanced and created potential routes forward.

During the second half City operated in what often appeared a mid-block that meant them limiting the potential spaces available to Chelsea, but their positional methods remained consistent. The hosts therefore continued to struggle to create goalscoring chances; their late goal essentially flattered them.

Pep Guardiola set Manchester City up in his favoured 4-3-3 formation, and on this occasion deployed Kevin De Bruyne as their false nine. Chelsea, similarly, defended with a 4-3-3.

The unorthodox elements to City's in-possession structure challenged Chelsea's attempts to defend, and ultimately provided the foundation for City's victory. João Cancelo, nominally their right-back, featured as a right-sided central midfielder and therefore often occupied one of Chelsea's three central midfielders; with Bernardo Silva and Ilkay Gündogan occupying the others, Rodri had the freedom to move into central defence to create a three-on-three against the hosts' front three.

A passing line was therefore created into Oleksandr Zinchenko, who regularly succeeded in advancing with possession or in drawing one of Chelsea's midfielders out of position and in turn freeing up one of City's midfielders. With De Bruyne withdrawing into the space between Chelsea's defence and midfield he either received between the lines or freed up Phil Foden to make diagonal runs into the spaces vacated by Kurt Zouma if the central defender followed De Bruyne. One such run from Foden was made in the process of him scoring their second goal.


Cancelo's positioning regularly baffled Frank Lampard's team, who struggled to adapt before the final whistle. With City's goalkeeper Zack Steffen contributing as a central defender of sorts, John Stones drifted to right-back and their back four was preserved to continue to encourage Cancelo to advance. Given Chelsea's front three prioritised Rodri, Steffen and Rúben Dias, their wider central midfielders were drawn to press City's full-backs, and City's central midfielders therefore targeted their opponents' blindside and offered a passing option in central midfield. Chelsea's players were regularly drawn out of their defensive positions because of the new challenge they were being presented with, and City sought to capitalise by targeting the new spaces that were created and on Chelsea defending as individuals instead of collectively; the hosts pressed, but didn't cover.

The understanding that existed between Foden, Gündogan and De Bruyne towards the left posed a consistent threat. With the positions adopted behind them creating the spaces they sought, Gündogan worked to offer support, and Foden ran in behind as the third man to penetrate beyond Chelsea's defence.

City also threatened on the counter. De Bruyne and Sterling combined to access the spaces outside of Chelsea's central defenders – Sterling's dribbling abilities regularly unsettled their opponents. The visitors were so effective that the difference in their build-up play and tactical approaches represented a mismatch; they perhaps should have scored more goals.