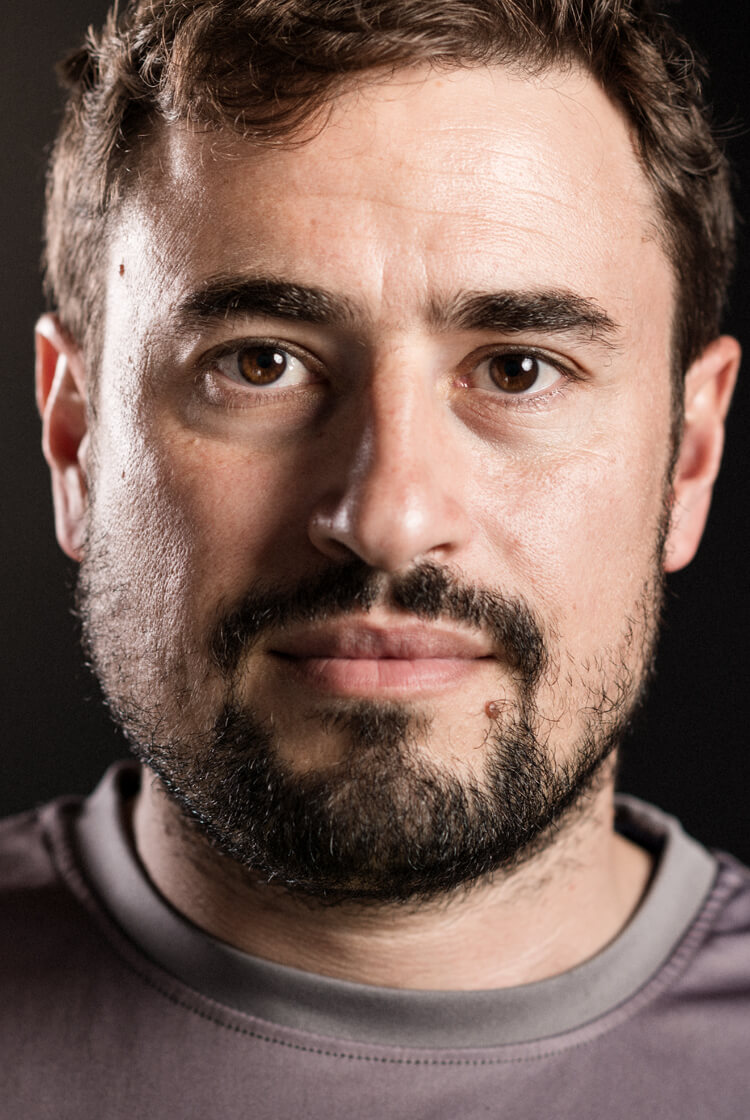 I learned a lot from playing chess.

My father is a Spanish chess champion, and he taught me how to play when I was very young. His own father taught him, and one day I will teach my own son.

The first thing I learned is that there is no luck in chess. It’s the only game I know where, if you are better than me, you are always going to win. So there is only one way for me to beat you – I have to know more.

That means I have to put more work into the game. But the most important lesson my father taught me is this – when you lose a chess game, the biggest learning is in the defeat.

It’s something that people in sport say a lot, but in chess it really is true. Because, if you beat me, it will be easy to analyse where you have been better and precisely what led to your victory.

If I understand why I made the mistake, I know I will never make that one again. So, in that way at least, I win.

It’s something I have come back to throughout my career. Yes, I have had successes, but I have always learned more from moments when I have failed.

My career has been built on a strong foundation of learning. I was 20 years old when an injury ended my playing career. I had always known that I was not good enough to make it, though. I saw that every time my father took me to watch Barcelona.

On one of those occasions, I remember sitting high up in the Camp Nou, watching the first game that Pep Guardiola played in and thinking: "Wow. That’s a player."

Like most kids in Spain, football was my hobby. But I could never leave it at that. When I like something, I can’t just like it. I have to go deeply into it.

Let me give you an example – if I’m reading a book on Plato and I really like it, well, then I have to read everything about Plato. When I started playing the guitar, that was the same – as soon as I started, I got massively into it.

"I never had experience as a professional player; I couldn’t get knowledge from within the game. Instead I had to seek it out"

This explains a little bit how I ended up going from coaching the young players at my hometown club to getting my Pro Licence at the age of 26. Becoming a coach in Espanyol’s academy and, a few years later, in 2009, becoming the head coach of the club’s reserve team.

I never planned this pathway. But as soon as I started doing it, I realised that it is one thing to have your ideas while you are playing the game. If you are going to make it your career, though, you need the education too.

In Spain, it takes five years of full-time study to become a coach. It’s a long time, but I understood the responsibility that was on my shoulders when I was working with young players.

If I make a mistake now, well, the players I’m working with have a lot of experience and are older. You can still improve them, but they are almost made.

If I make a mistake with a young player, that’s a huge mistake. That’s why I thought I really must know what I am doing to avoid making mistakes and hurting their development. That’s why you need a lot of knowledge.

“A good coach is one that, when he takes a good player, he doesn’t make him worse.” These are words I will always go back to.

They belong to a former mentor of mine, Manel Casanova. He was director of the academy in Espanyol and one of the best academy directors in Spain, who developed more than 130 players for La Liga.

I had so many influences and mentors during my early years as a coach. Because I never had that experience as a professional player, I couldn’t get the knowledge from within the game.

Instead, I had to seek it out. Extract it from others, and hope that, one day, I would get the chance to apply it myself.

My search for knowledge started in Spain. In the beginning I would try to learn why a team does this. Why a coach thinks like that. At Barcelona, I saw how Johan Cruyff changed the game. He was the first one – at least in my country – who managed to play one-touch. He created a team that could attack on a one-touch basis.

I knew I needed to expand myself, though. In early 2000, Bayern Munich were playing really good football under Ottmar Hitzfeld. He caught my eye because he could make the team play in either a 3-5-2 formation or a 4-3-3 formation, but the philosophy – the idea – stayed the same.

"My phone rang. ‘It’s Michael Laudrup here. Pleased to meet you. I would like to talk to you about coming to England’"

At that time, everyone was thinking this coach plays 4-4-2 or that coach plays 5-3-2, and that’s it. I was interested by the way he was stepping outside of this and, like I said, once I’m into something, I have to get totally into it.

So I jumped in my car, drove to Munich and spent three months camping there – I couldn’t afford to stay for so long in a hotel. During that time I went to every Bayern training session, trying to learn as much as possible from Ottmar.

The next time I left Spain was in 2010. I’d worked at Espanyol, but now I wanted to explore football somewhere different.

Experience a different culture; expand myself further. I went to Sweden.

It ended up being my introduction to English football. At Malmö I was assistant to Roland Nilsson, who had played in England for Sheffield Wednesday and Coventry City.

He told me a bit about the English game and mentality. He gave me an idea of what football in England was like.

Two years after I arrived in Sweden, I was on the move again. To Norway, where I joined another coach with English football in his blood. Age Hareide played for Manchester City and Norwich, and has a lot of the English mentality.

While I was with him at Viking, I started to understand how important a winning culture is in a team. We spent a lot of nights talking about how vital this was in England, and I thought I would like to experience this. I want to really understand what is happening over there.

When the phone call came, I was coaching Malaga’s reserve team – I’d had enough of the cold – and helping to grow their academy. It was a Friday afternoon when my phone rang, and the voice on the line said something I will never forget.

“It’s Michael Laudrup here. Pleased to meet you. I would like to see you to talk about coming to England.”

"When a player is young, he needs to see the ball all the time"

Well, that came out of the blue. Michael Laudrup was my idol when he was a player. I think I answered before he had even finished talking. “I’m coming tomorrow.”

He was managing Swansea, and the club wanted a coach with experience of developing young players to help their academy. It offered me the opportunity to learn more about the English game while also learning how to develop young players for it.

For seven months, I focused just on this – what does a player need to be able to play in the Premier League? What are the important things a player must learn?

You will always hear opinions on that. Opinions are just opinions. But, if you just look at the game, you can get the facts.

You need young players to have a technique level with total kinaesthetic control. So when a player is young, he needs to see the ball all the time, because he gets information with his eyes – he sees where the ball is and what it is doing. But as soon as he reaches a higher level, he gets that information from his own body.

He knows, if he touches the ball like this, the ball will stay here. If he touches it another way, it will go there. As soon as a player gets to that level of kinaesthetic control, he can start lifting his head. Now he starts to see what is around him more. He can start learning the tactics of the game and two key things.

How to beat the opposition, and how to avoid being beaten.

For seven months at Swansea, I was consumed by all of this, and then Michael Laudrup was sacked.

After that, everything changed very quickly. The Swansea chairman, Huw Jenkins, put Garry Monk in charge and asked me to assist him. I didn’t know Garry at all, but Mr Jenkins knew us both and he thought we might work well together. He was right.

We complemented each other. I had the coaching experience, and he had a lot of knowledge about the English game that he shared with me. In English, I think the word is ‘symbiotic’. I benefitted from him in the same way he might have benefitted from me.

During our third season in charge at Swansea, I was faced with one of the most difficult decisions of my career. I was offered a job. An opportunity to manage in the Championship.

It was a well-run club with a clear idea of what they were doing and a fantastic set-up. In almost every way, it was the perfect job for me to start my managerial career in England. Except for the timing.

Swansea was going through a blip. It was a bad time for the team and I could not leave Garry at that moment. We started together, so we are in this together.

It was a matter of values. I live my life according to my values. If that opportunity doesn’t come again, I told myself: well it’s just a job, isn’t it? But now I can pick up the phone to Garry and spend time with him and we’re good friends. That’s what’s going to make more of a difference to my life.

Now, I have a son and I will always tell him the same – take decisions according to your values. If it was meant to be, then it will be in the future for you.

My opportunity did come again, at Oxford United. I spent almost seven months there as a manager, and did my best to improve not only the team but the club, too.

I felt that my experience at Premier League and Championship level could help raise the standards; bring long-term stability. But these days you cannot be bitter if a club decides to go down a different path. It's the world we live in.

As a manager, you have to take the lessons and keep improving. Analyse the decisions taken on and off the pitch, and prepare to return when the right opportunity comes up. When Garry called me about Birmingham City, I knew it was the right step.

More important than my plans as a manager is the motivation I always seek within an opportunity. I had other options to get back into management, but the size of the challenge at a big club like Birmingham and the success we achieved together previously were good enough reasons to choose this opportunity above the others.

Now we sit here at a new chessboard. With all of our extra knowledge and experience, we are once again looking for that match-winning move.