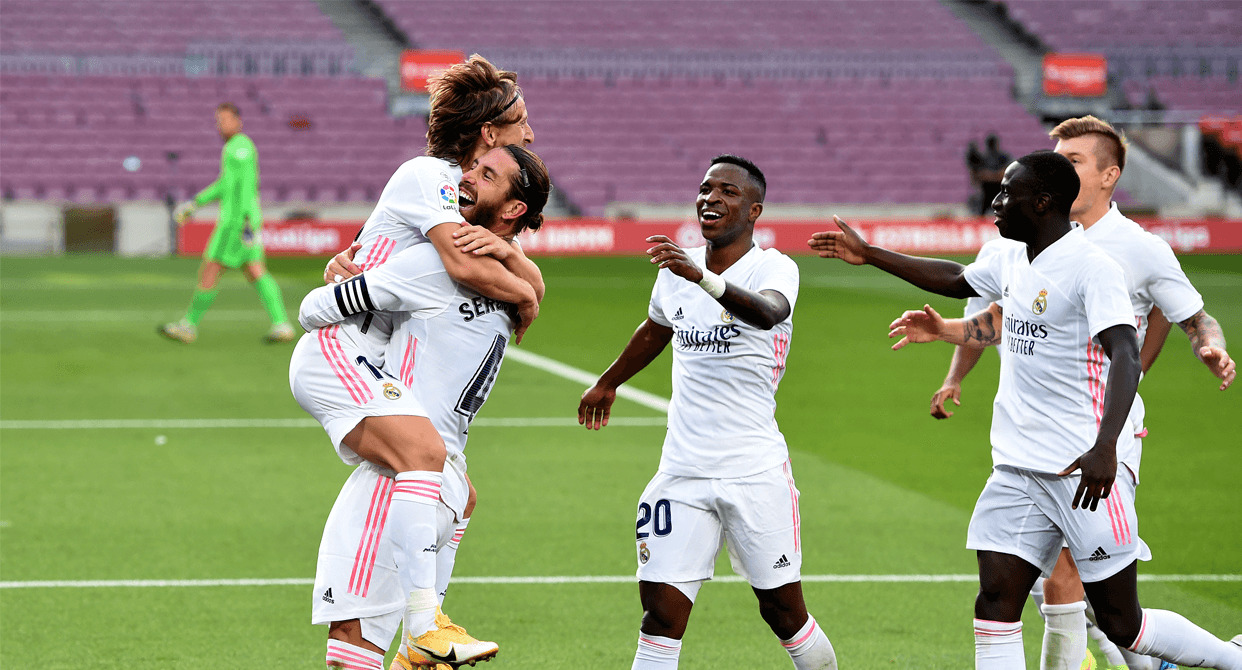 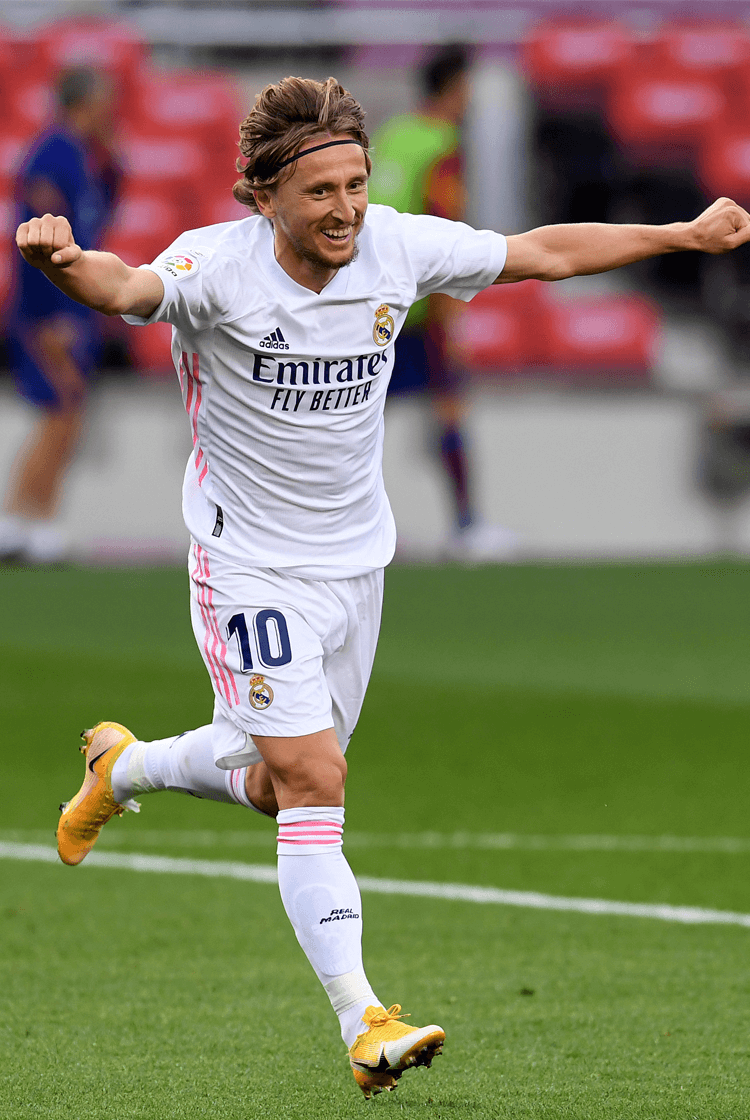 Real Madrid won the first Clásico of 2020/21 as Ronald Koeman's underwhelming start as Barcelona manager continued with a second successive league defeat. A typically action-packed derby featured goals inside eight minuted from Federico Valverde and Ansu Fati – who, aged just 17, became the youngest ever goalscorer in the fixture's history – and chances at both ends provided another absorbing encounter. In the second half Real captain Sergio Ramos won a contentious penalty and then converted, before their substitute Luka Modric secured victory with a coolly taken third, improving Zinedine Zidane's impressive record at the Camp Nou, where in six matches he has three wins and three draws. “I'm thrilled for the players,” Zidane said. “It's a team victory. Given the criticism we've faced recently, we have to stay calm, stick together and play when we have to play, just as we did today. We put in a great performance against a team that we know play wide open.” 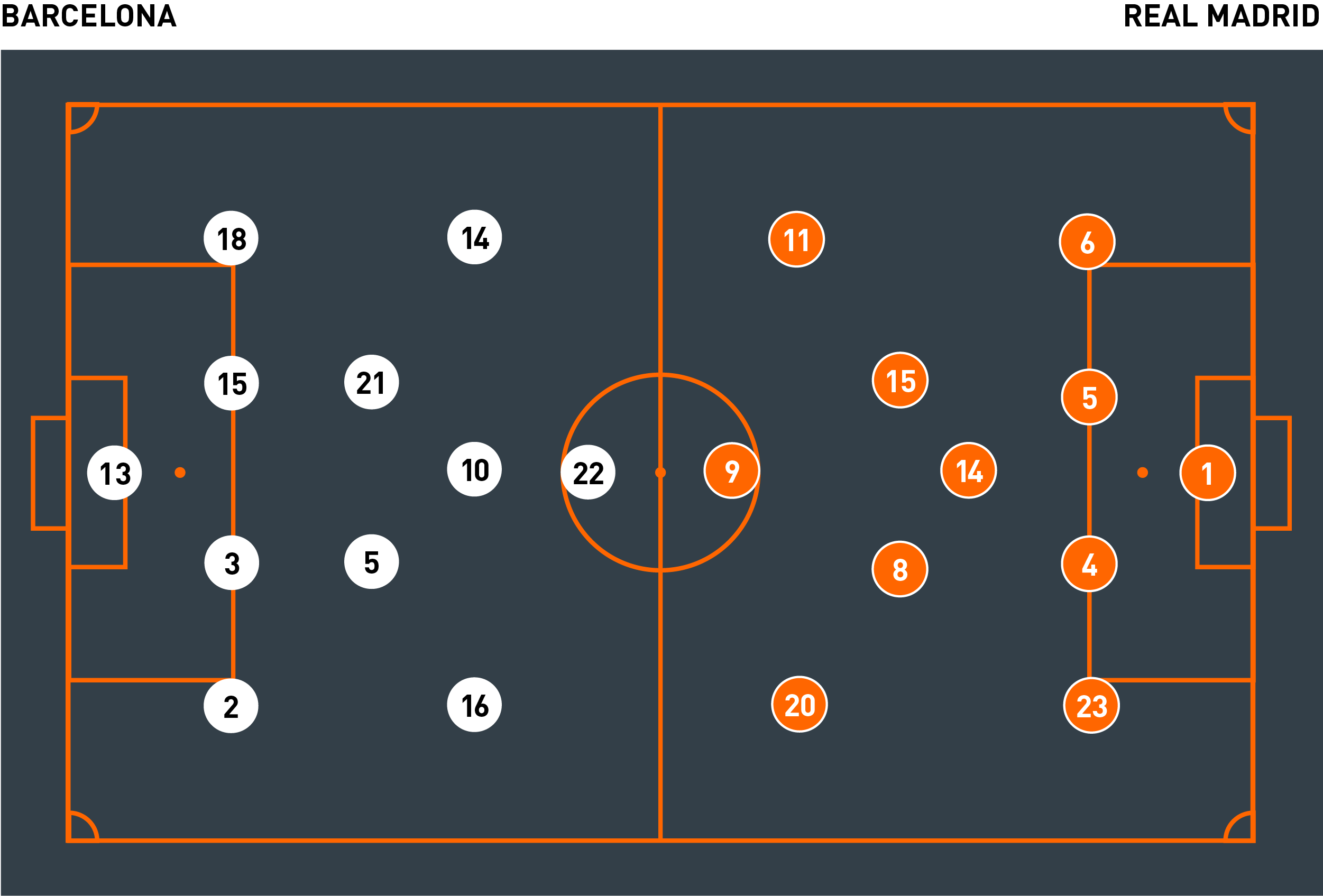 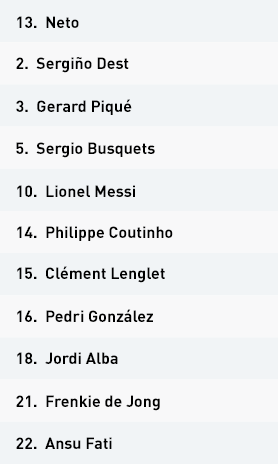 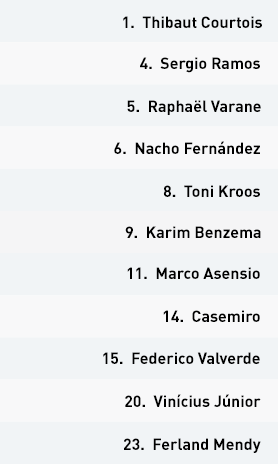 Ronald Koeman set Barcelona up in a 4-2-3-1 formation in possession with Sergiño Dest, Gerard Piqué, Clément Lenglet and Jordi Alba in defence and Lionel Messi behind Ansu Fati in attack. Real Madrid used a 4-5-1 when out of possession, but occasionally moved to a 4-4-2.

Barça tried to break Real down with patient passing play. Messi dropped into deeper positions to pick up possession and create, and they had different strategies for attacking centrally and for attacking in the wide areas.

With Messi dropping in centrally, Barça’s wide midfielders moved inside and their full-backs pushed up. Messi combined with a narrow midfield, and Barça used short, sharp combinations to try and play around Real's midfield, with Messi, Philippe Coutinho and Alba one of the most effective combinations. The general strategy was for two players to draw an opponent in and then use a third to make a blindside run to receive a pass in space.


In the wider areas Barça had a more simple approach. They used contrasting movements between a wide midfielder and forward to disrupt Real’s defensive line and create spaces through which they could penetrate. Essentially, Coutinho dropped towards the ball while Alba advanced beyond him.

Barça focused more on attacking down the left than right, and they managed to advance in behind Real’s defence on a regular basis – including when scoring their only goal via a cross from Alba to Ansu. Otherwise, Real's defence was adept at tracking runs amd passing players on to each other, restricting access for Alba. Doing so was either done by applying pressure on the left-back to ensure that his angle of delivery was minimised, or Real's defender positioning himself further from the ball and instead blocking the most dangerous crossing line in a deeper position.

After going 2-1 up, Real fell deeper and became more compact, leading to Barça having more sustained possession but less space in which to operate in the final third. With that in mind, the contrasting movements in the wider areas were less likely to be successful because any disruption to Real’s defensive structure resulted in less space to exploit. In central positions, with a more compact structure ahead of them, Barça found it difficult to break their opponents down and, despite seeing lots of the ball, generated very few quality chances and could not find a way back into the game.

The visitors recognised an opportunity to exploit their three-on-two in midfield early on and used Toni Kroos’ movements to try to create positional dilemmas for Barça’s midfielders. Kroos regularly dropped into a false full-back position – usually on the left – allowing Ferland Mendy to push up and Vinícius to move inside, encouraging regular progression beyond Barça’s first and second lines.

Real progressed play consistently by making penetrative runs from deep positions on the blindside of their midfield opponents. Valverde did so on several occasions during the first half, including when making a run beyond Benzema to score the opening goal.


Real typically moved the ball to a full-back, a false full-back or wide midfielder, and as Barça's players turned their attentions to that wide position, space opened up centrally for runs to be made on their blindside. It wasn’t just Valverde who made them – Kroos and Mendy did so, too.

Real also recognised opportunities to switch play quickly, as Barça had to tuck their far-side wide midfielder in to deal with Real’s overload in central midfield. Doing so led to chances to isolate Barça's full-backs and, once in that situation, the relevant wide attacker could manipulate the full-back’s position by making runs in behind or by moving inside, creating space for Real’s full-back to move into and receive the switch of play in space.

Another feature of Real’s play was the detail and movement involved in their one-touch passing. As passes were made, their players always tried to remain one step ahead of their opponents, knowing where the next pass was set to go; they appeared very in tune with one another. That also meant that they could maintain impressive speed to their play and, coupled with clever movements, they played some really high-quality football Barça struggled to cope with.