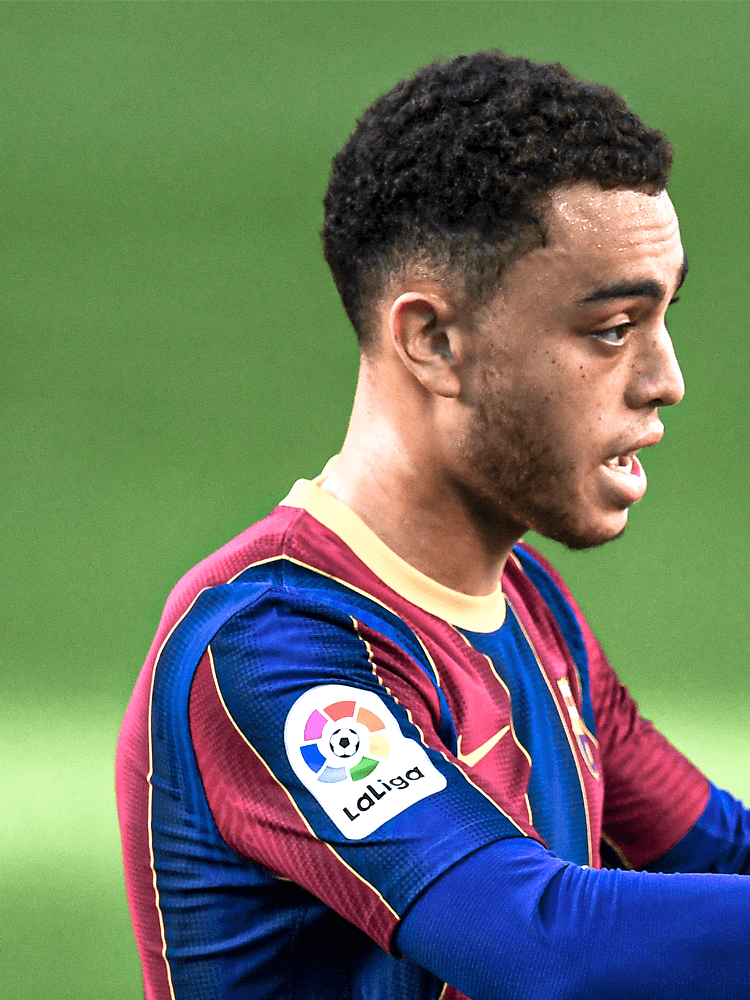 Profile
Replacing Dani Alves was always going to be tough. The Brazilian was instrumental in Barcelona’s success during his eight years at the club between 2008 and 2016, and in that time he built a devastating relationship with Lionel Messi, who often played in front of him. Attempts to replace him have taken Barcelona to Nélson Semedo, who has since moved to Wolves, and Sergi Roberto, who was moved from the central midfield role where he is arguably best, with mixed success. Following the arrival in 2020 of then 19-year-old USA international Sergiño Dest from Ajax for £26m, Barcelona hope to have finally found a long-term solution in what has been a problem position for a number of years.

After an injury disrupted start to his time at the Camp Nou, Dest has shown some of his best form at right wing-back following Ronald Koeman's decision to switch to a back three. “This system is really good for me and is going well for the team,” Dest said. “I have more space and I am more involved. I am really comfortable, playing almost as a winger, and it's really easy for me to play in this team.”

Tactical analysis
Dest is an attack-minded full-back who, though comfortable on the left side of defence, is at his best on the right, and is particularly effective when playing as a wing-back and is thus given greater freedom to attack. He is calm and courageous in possession, willing to receive the ball even when pressure is heading his way, and is therefore a useful player in a team that wants to build out from the back.

He is keen to get forwards at every opportunity, and makes tireless overlapping runs up and down the right wing to stretch the opposition and try to pin their left-back in deep territory, in the hope of creating space in front of the opposition’s defence for his team’s attackers or attacking midfielders if the ball doesn’t come his way. When a pass does reach him in a wide position, he can either receive to feet and look to take his opponent on – usually by following a few small touches with a drop of the shoulder and a heavier touch down the line to burst into space to cross (below) – or receive on the run, having made a movement to receive beyond his opposing full-back. He is clever with the timing and direction of those runs; on occasion he even directs his run towards goal and, if he is picked out, can move into a one-on-one as a result.

Dest has an exceptional turn of pace, so creates himself space to cross with impressive consistency, and he is far more effective at crossing when he has made himself space than doing so from a standing position. He needs to improve in those situations as he almost always fails when trying to curl the ball around an opponent and into the penalty area – when the likes of Kieran Trippier and Trent Alexander-Arnold are so effective. Overall, his crossing needs to improve – in his first 25 league games for Barcelona, he found a teammate with just five of his 33 cross attempts.

Defensively, Dest is particularly useful because he is so quick on the turn that he is rarely beaten at one-on-ones, which means his teammates are more content to leave him isolated against an opponent than they might another teammate. He is extremely fast to approach an opponent as the ball travels towards them, and once he has got close to them he shapes his body to invite them to take him on down the line, backing himself to win any race – safe in the knowledge that if the opponent does get half a yard of space, he can slide tackle effectively to attempt to win the ball or block any cross.

Given how adventurous he is, there are plenty of occasions when he is caught the wrong side of the ball, but he shows real willingness and desire when making recovery runs, and swiftly regains his position after losses of possession. He also takes the chance to counter-press high up the pitch if the opportunity arises. He presses with intensity and intelligence, showing play outside, and using the touchline to reduce the space his opponent can play in.

Role at Barcelona
Dest plays as an attacking wing-back towards the right of Barcelona’s 3-1-4-2 – and occasionally 3-4-2-1. Their system allows Messi – one of two strikers or the right-sided of the two 10s behind a centre-forward – to drift infield and find positions between the lines to receive the ball. Dest is left to provide both width and depth towards the right of Barcelona’s attacks. As he himself has pointed out, his role is almost that of a winger – he will often be among their most advanced players, making runs beyond the opposition's back line while Messi drops into deeper positions (above). Often, Dest’s off-the-ball movements will be most useful in creating even the slightest gap for Messi to operate in; Dest’s relentless runs will regularly act as a decoy, but that should not do his work a disservice. Plenty of others before him have sacrificed themselves for Messi.

He does, however, also play a key role in their build-up phases. As has been the case under every manager in recent memory, Barcelona pass out from the back under Koeman; their centre-backs spread out across the pitch, and their wing-backs push on (above). Dest is suited to that role because he is so calm in possession and is skilled at receiving the ball side-on as an opponent approaches before either playing a pass infield to a central midfielder or attempting to find an attacker – usually Messi – further forwards. Barcelona are typically bold in playing out from the back, and Dest is happy to contribute.

He shows good awareness to cover behind their right-sided centre-back – usually Óscar Mingueza – should he be tempted out by the run of an opposition attacker, but generally his work is done higher up the pitch than the rest of Barcelona's defenders. With three centre-backs on the pitch, Barcelona are better able to cover the space that Dest leaves than if he had left his spot in a back four. Dest is well-suited to the role that Koeman has him playing, and is showing why Barcelona spent big on him.