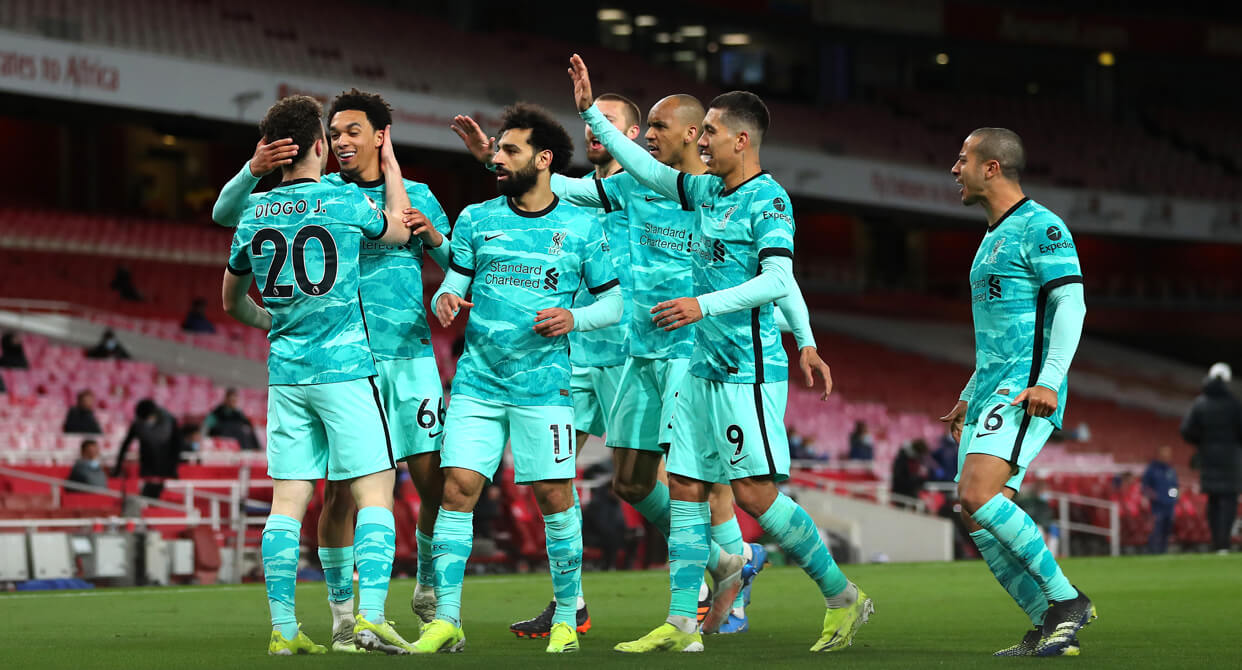 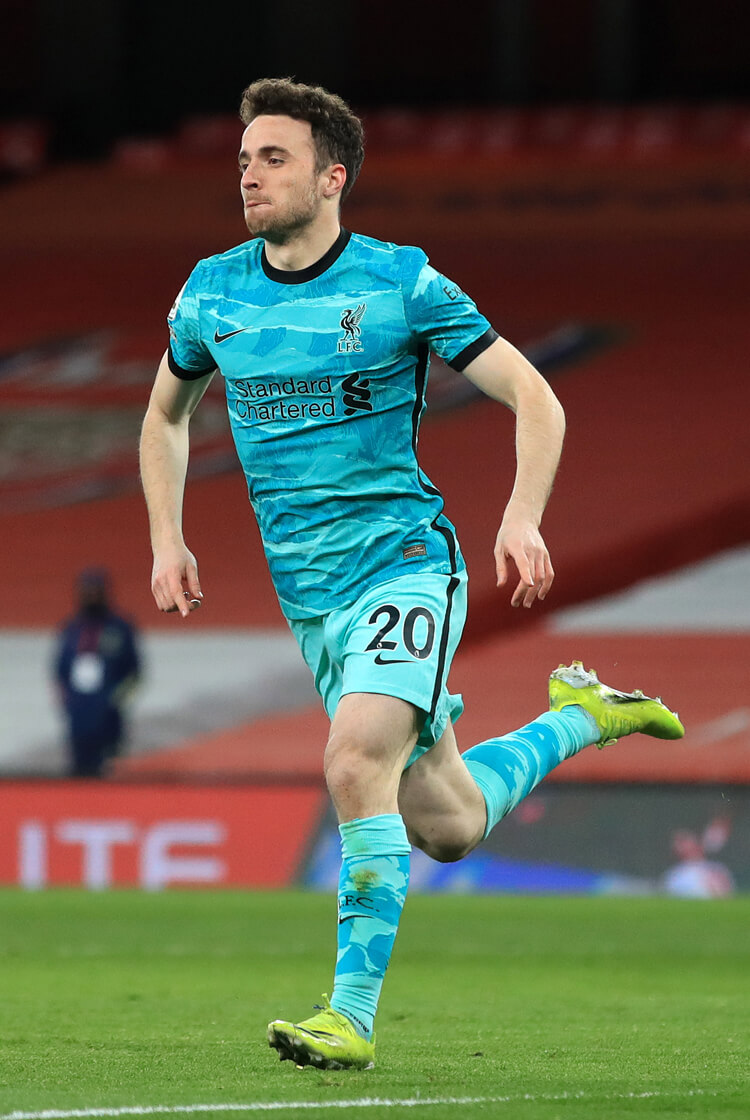 Liverpool secured a third straight victory in all competitions for the first time since October, eventually seeing off a poor Arsenal with ease at the Emirates. Jürgen Klopp and his visitors were the better team throughout but had to wait until the second half before scoring the goals that earned them a valuable three points in their quest to catch Chelsea in fourth. Their substitute Diogo Jota was again the catalyst, heading in an exquisite cross from Trent Alexander-Arnold for the opening goal just past the hour. Mo Salah scored a second soon after, and Jota completed the rout 10 minutes from time. The victory was Liverpool's fifth from six visits to London this season – only Fulham have taken a point from them. Arsenal will need to improve with a Europa League quarter final on the horizon. "They were much better than us in every single department, and I'm fully responsible for that," said their manager Mikel Arteta. "We want to apologise, to our people and our fans." 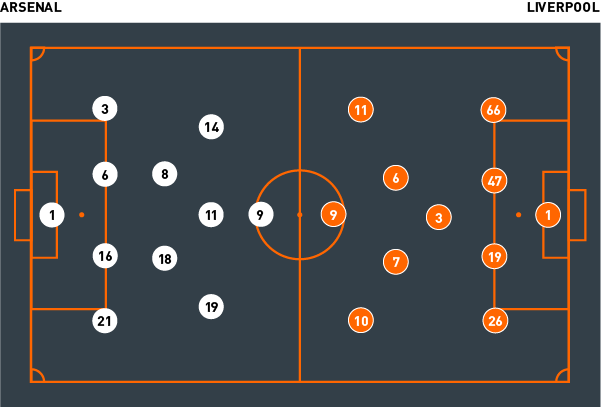 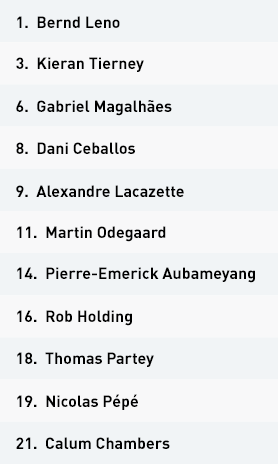 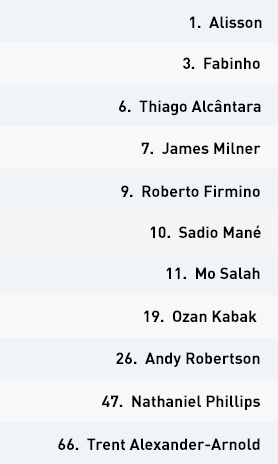 Arsenal manager Mikel Arteta set his team up in a 4-2-3-1 formation, with Alexandre Lacazette flanked by Nicolas Pépé and Pierre-Emerick Aubameyang. The double pivot of Thomas Partey and Dani Ceballos looked to provide both defensive security and an ability to play through the middle when building their attacks.

From early on, however, the hosts bypassed midfield and played long and in behind for their wide forwards. Doing so didn’t work, and resulted in a high number of transitions into possession for Liverpool, forcing Arsenal into long periods without the ball.

Calum Chambers tried to push forward when Arsenal did have the ball, to support Pépé and create overloads against Liverpool left-back Andy Robertson. The remaining Arsenal defenders would remain compact and move across the pitch, aiming to minimise the space and potential vulnerability between Chambers and their right-sided centre-back Rob Holding.

The four Arsenal forwards tried to play with fluidity. Martin Odegaard would interchange positions with their central striker Lacazette, who at times would drop deeper to receive and create a decoy for the forward Arsenal pass.


When Arsenal were able to play through their central midfielders, it created an opportunity for more players to join their attacks, and for the ball to be played into wide areas. When building through Partey in particular, that created the opportunity for Aubameyang to find space wide on the left and to drive at Trent Alexander-Arnold, or to slide a ball in between any gaps in Liverpool's defence. Alternatively, Partey would look to combine with Odegaard, who acted as a front pivot, and to move the ball across Liverpool's back four. That was still rare, however, because they persisted with the long-ball tactic that had little or no impact.

At the beginning of the second half, Arsenal looked to play with higher speed and intensity in possession. Play was built more through midfield and moved around the pitch to try and unsettle Liverpool. Partey, Lacazette and substitute Cédric Soares – who had replaced the injured Kieran Tierney at left-back – looked to combine at a high tempo, attempting to break lines in Liverpool's defence. Unfortunately for Arsemal, that approach proved equally ineffective in creating clear goalscoring chances.

Cédric and Chambers tried to push up in line with their central midfielders when Arsenal built from the back, making a line of four across the pitch and forcing Mo Salah and Sadio Mané into more defensive positions. The lack of any real sustained possession made it difficult for the hosts to exploit any positional advantage, however, and the visitors ultimately scored the goals that their dominance merited.

Liverpool manager Jürgen Klopp set his team up in a 4-3-3 formation in which Fabinho played as a single pivot. Their full-backs Andy Robertson and Trent Alexander-Arnold often played in advanced positions, combining with wide forwards Sadio Mané and Mo Salah, who regularly adopted the inside wide channel to create overloads against Arsenal's back line.

Throughout, Salah took up a starting position in the outside channel. Doing so made it difficult for left-back Kieran Tierney, and later Cédric Soares, to mark him tightly, but when the ball travelled forwards he would drive inwards, forcing the defender to quickly change his body shape and position. It was a simple but effective movement that gave Liverpool and Salah a consistent advantage when attacking towards the right.

When Liverpool built from their own defensive third, Fabinho dropped to offer an option for his centre-backs while the full-backs played with width and height. He gave Liverpool security at the back, and an excellent platform from which to play in behind the more attacking Arsenal right-back Calum Chambers – they exploited that space in Arsenal's defensive unit on numerous occasions.

With Arsenal shifting between a mid-block and a high press, Liverpool found it difficult to penetrate, and often opted to play around the hosts’ compact and deep shape, aiming to tease them out of position and commit a defender towards the ball. When Arsenal moved across to cover space, Liverpool had a range of passing options, and usually opted for a switch in play to change the point of attack, or tried to build through the midfield three of Fabinho, James Milner and Thiago Alcântara.


As a trend, Liverpool were keen to overload Arsenal in the wide areas, but those providing the overload changed depending on the position of the ball and the area of the pitch. If they won the ball back in central areas, their left-sided central midfielder Milner would look to provide an overlap in the wide channel with Mané. That fluidity of personnel afforded Liverpool the opportunity to attack quickly, hoping to catch out any poor organisation in Arsenal's back line.

The relationship between Alexander-Arnold and Salah on the right was productive for Liverpool. The two would switch between the wide and inside channels, making it difficult for Arsenal to track their movement and to cut passing lanes between the two. It came as no surprise that the visitors’ crucial opening goal came from the two combining before Alexander-Arnold’s superb cross for substitute Diogo Jota.

The introduction of Jota for Robertson – Milner shifted to left-back as they moved to a 4-2-3-1 – marked a change in the pattern of the game for Liverpool. Jota frequently occupied a position in between Rob Holding and Chambers, releasing Mané to play with more width on the left and giving Arsenal's defence a range of decisions to make at high tempo.

That tactic was fundamental in Liverpool breaking Arsenal’s low block and was evident in all three goals, with numbers on the left creating more space for a string of outstanding deliveries and runs from the right. With Liverpool effectively locking the box when the ball entered the area from that side, Arsenal rarely managed to clear it well and were duly punished with three goals in an excellent away display.