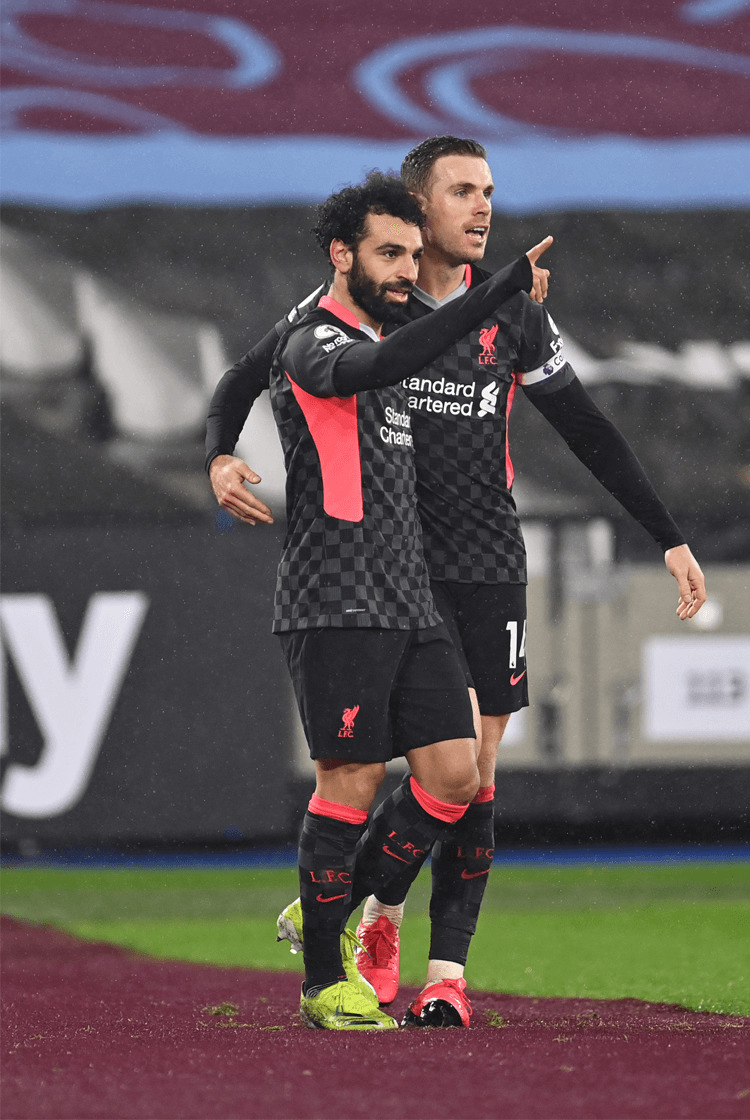 Liverpool moved up to third in the Premier League table and ensured West Ham finished the weekend outside of the Premier League's top four with a convincing victory at the London Stadium. Impressing with an unfamiliar diamond midfield, and with Roberto Firmino among the substitutes and Sadio Mané absent through injury, two second-half goals from Mo Salah – the second concluding a superb counter – and another from Georginio Wijnaldum rewarded their dominance. Craig Dawson's finish, in the 87th minute, for the hosts came with the three points already secure. "We scored three unbelievable goals," said Liverpool's manager Jürgen Klopp. "These boys are a really good group. They're not happy at not being successful, not winning, but they always have the right attitude." His opposite number, David Moyes, said: "The players have been excellent. It's a lesson for them – the levels we have to get to. We didn't do the things we usually do well." 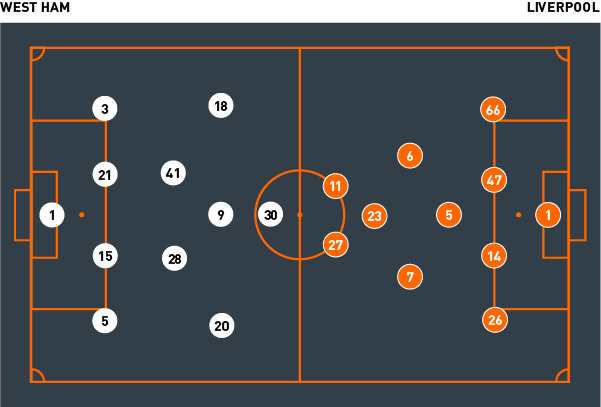 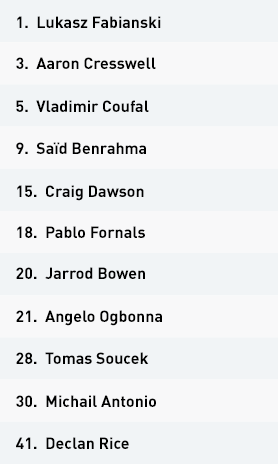 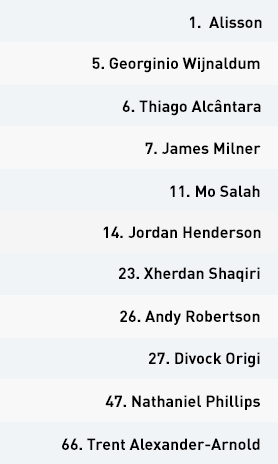 West Ham were set up by David Moyes into a 4-2-3-1 formation built on the double pivot provided by Tomas Soucek and Declan Rice. Their opponents, Liverpool, remained in their less-familiar four-diamond-two.

The hosts struggled to gain and maintain possession throughout the first half, during which they favoured direct passes towards and ahead of Michail Antonio, their lone striker. Liverpool also sought to apply an aggressive press. Xherdan Shaqiri's energy was particularly influential in frustrating West Ham; between them, he, Mo Salah and Divock Origi sought to press West Ham's central defenders and central midfielders, and so switched between pressing those defenders and covering the passing line into those in midfield.

Salah and Origi pressed from the outside to screen potential passes out to West Ham's full-backs. When Shaqiri pressed sufficiently far that he struggled to screen Rice or Soucek, Thiago Alcântara advanced. On the occasions West Ham found their full-backs, Thiago or James Milner moved to press them, ultimately preserving the back four behind them and encouraging them to remain focused on West Ham's four most attacking players.


Pablo Fornals and Jarrod Bowen operated in the half-spaces, and therefore closer to Saïd Benrahma and Antonio, creating the potential for combinations. Via their wide attackers moving infield, space also existed in the wide areas for Aaron Cresswell and Vladimir Coufal to advance into; once there they sought to play crosses, but their deliveries were too often overhit.

Benrahma increasingly looked to drift into different areas, and therefore to receive in pockets of space that gave his team the potential to break lines. His movements also created spaces for other attacking players to make further runs, testing the organisation and positioning of Liverpool's defenders.

West Ham similarly offered potential during moments of transition. Early balls were played for Antonio to pursue, but those defending recovered well to prevent significant goalscoring chances being created.

Liverpool were organised by their manager Jürgen Klopp into, unusually, a four-diamond-two formation in which Georginio Wijnaldum, James Milner, Thiago Alcântara and Xherdan Shaqiri featured in midfield. Their opponents, West Ham, defended with a 4-4-2,  via Saïd Benrahma advancing to alongside Michail Antonio.

Klopp's team largely succeeded in controlling possession throughout the first half, owing to their diamond midfield so consistently providing options, but they struggled to progress beyond West Ham's back four. Antonio or Benrahma moved to occupy Wijnaldum while the other pressed the in-possession central defender, and Declan Rice and Tomas Soucek sought to screen Thiago and Milner if they were positioned between the lines, and to screen passes into the feet of Shaqiri. When possession moved wide, one or the other would take Shaqiri, and the relevant wide midfielder moved to take the opponent on that side of Liverpool's diamond.

If, in theory, their approach nullified that diamond's potential and preserved West Ham's back four, the individuals featuring in that diamond moved with dynamism and sought to draw their opponents out of position. Liverpool offered potential in the wide areas, where Milner and Shaqiri made blindside and penetrative runs and where Divock Origi and Mo Salah withdrew to towards possession. With Craig Dawson and Angelo Ogbonna impressing at tracking runs infield, however, and with keeping those attacking away from goal, they struggled to advance beyond West Ham's full-backs.


Shaqiri and the midfielder to his left or right also offered contrasting movements, testing Rice and Soucek, but the visitors continued to offer too little threat in behind. Even if their movement was suitable, passes were too often played into feet and then returned backwards instead of followed by a penetration forwards – longer passes in behind from Jordan Henderson were therefore attempted, but they, too, came to little.

Liverpool instead posed a significantly increased threat when they began to find their midfielders between the lines and then switched possession into a wide area. Gradual, diagonal switches of play proved potent, and took them through the thirds.

When, in the second half, they offered considerably more runs in behind, they succeeded in creating both goalscoring opportunities and spaces between West Ham's units. Their attacking movements particularly told when their first and third goals were scored; the second came after a high-quality counter.