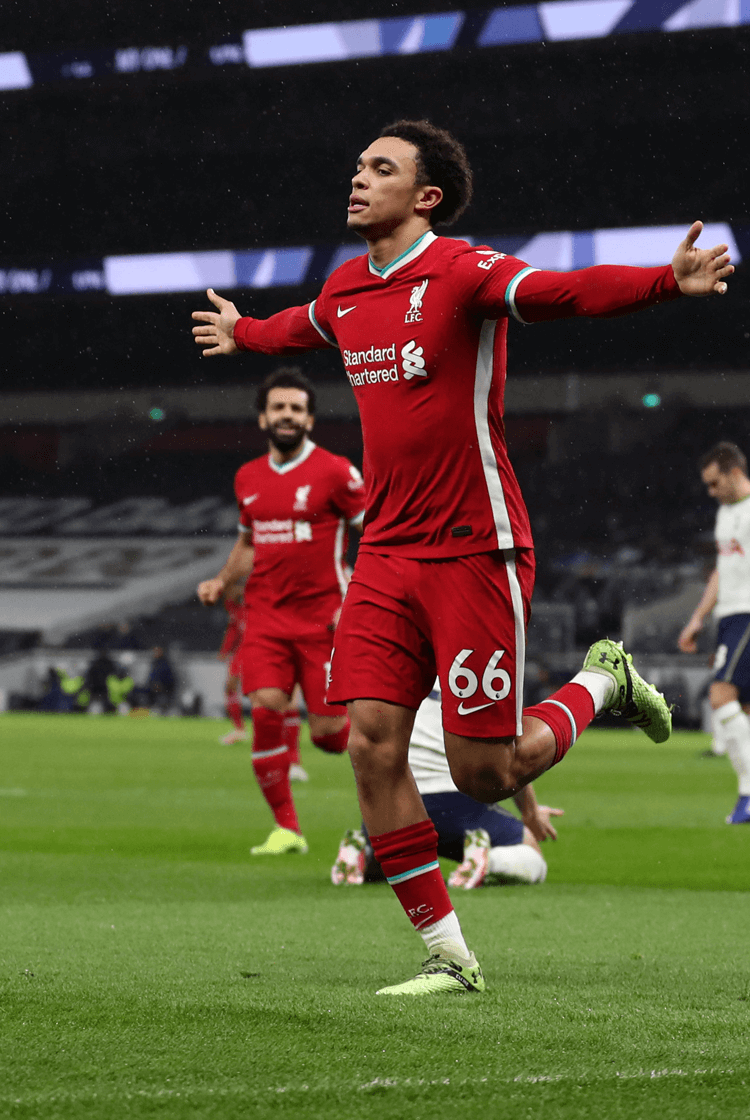 Liverpool revived their defence of the Premier League title with a convincing victory at Tottenham that may even leave their hosts incapable of achieving anything beyond qualifying for the Champions League. A run of five league fixtures without a win was ended by one that took them back into the top four, and to within four points of rivals and league leaders Manchester City, who they host next month. Roberto Firmino gave Liverpool the lead on the stroke of half-time; Spurs' Harry Kane, struggling with injuries to both ankles, didn't return for the second half, and Trent Alexander-Arnold proceeded to double their lead. If a goal from Pierre-Emile Hojbjerg gave Spurs hope of a comeback, those hopes were ended when Sadio Mané's finish rewarded Liverpool's dominance and put all three points beyond doubt. "We were punished by our own mistakes," said Spurs' manager José Mourinho. "Everything went wrong in the first half, we shouldn't be losing at half-time. But we had a good reaction, and then another mistake." His opposite number, Jürgen Klopp, said: "It was a brave performance in a game against a counter-attacking monster, which they are, and that makes it even more special." 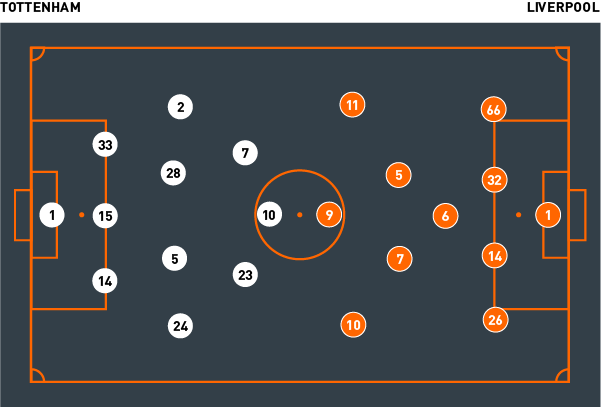 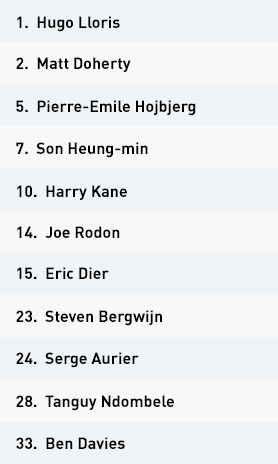 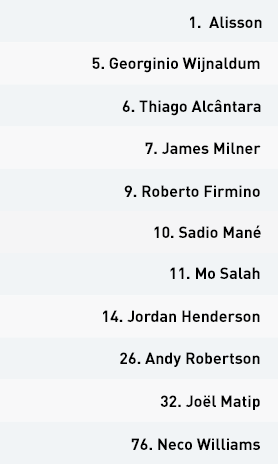 Tottenham were organised by their manager José Mourinho into a 3-4-3 formation featuring Joe Rodon, Eric Dier and Ben Davies in central defence. Their visitors, Liverpool, remained in their long-favoured 4-3-3.

Mourinho's team both attempted to build from defence and to play more direct passes. When building from defence, the feet of Tanguy Ndombele, in central midfield, became their target; he, in turn, would seek to progress their attacks with his strength and one-on-one abilities, and he posed a threat throughout the first half. Harry Kane also withdrew into midfield to provide an additional number there, leaving Son Heung-min and Steven Bergwijn to stretch Liverpool's defence with their movements further forwards.

There were also moments when they troubled Liverpool via their longer passes, even if they were often played from a static position and Liverpool were therefore prepared to defend against them. It was when they were played early, and Liverpool had been applying a higher press, that they offered greater potential.


For all of that sense of organisation, Liverpool's midfield was often ineffective during the first half, when Spurs found Pierre-Emile Hojbjerg, Ndombele, and Kane – when he moved there – with ease. Through balls in behind, played from deep positions, offered their likeliest route to goal; Son, particularly, posed a threat behind Liverpool's high defensive line, making him a consistent target from those passes and occasionally forcing Alisson to advance from his area to beat him to them.

During the second half Spurs reorganised to adopt a 4-2-3-1, owing to Kane's injury. Matt Doherty and Davies featured at full-back, outside of Rodon and Dier, and Hojbjerg and Harry Winks were at the base of midfield; Son became their lone striker.

If that new shape involved Spurs having closer relationships – particularly via their wide attackers moving infield to alongside those in central midfield while those at full-back advanced – its promise didn't last, because they became flat and unimaginative. They too regularly struggled to play through Liverpool's structure, so continued to attempt longer-range passes, even if they were proving ineffective.

Liverpool retained their manager Jürgen Klopp's favoured 4-3-3 formation, and on this occasion featured Joël Matip alongside Jordan Henderson in central defence. Their opponents, Tottenham, defended with a 5-3-2.

Spurs initially sought to press their visitors via Harry Kane taking Georginio Wijnaldum, the deepest positioned of Liverpool's central midfielders. Son-Heung min and Steven Bergwijn pressed Henderson and Matip, their wing-backs took the full-backs opposite them, and Pierre-Emile Hojbjerg and Tanguy Ndombele took two of whichever of the wider central midfielders or deep-moving attacker was posing the greatest threat.

They later instead defended with a mid-block, via Bergwijn withdrawing into midfield. The overload that would have existed in central midfield was negated by Kane and Son moving to either side of Wijnaldum and instead invited Liverpool's central defenders to have possession. Giving Henderson too much time, however, meant him delivering a fine pass to Sadio Mané in the build-up to their opening goal.


Clipped passes in behind Spurs' defence, complemented by diagonal runs from their attackers – Mané, particularly – meant Liverpool often accessing those spaces. Space next to Joe Rodon was perhaps most often targeted; diagonal runs from Mané and Mo Salah were also complemented by Roberto Firmino, regularly moving into midfield to create a new overload, arriving late into the penalty area as the understanding that existed between Liverpool's front three again told.

Spurs increasingly retreated into deeper territory, and to the extent that there were times they had all 11 players behind the ball and in their defensive third, making potential penetrations particularly difficult for Liverpool to achieve. Klopp's team regardless attempted to achieve combinations around the penalty area via penetrative runs from deep territory but, largely because of the timing of those runs, they struggled to create quality goalscoring chances. Their best chances came through them regaining possession further forwards and then quickly attacking, or via lengthier passes in behind from deeper positions.