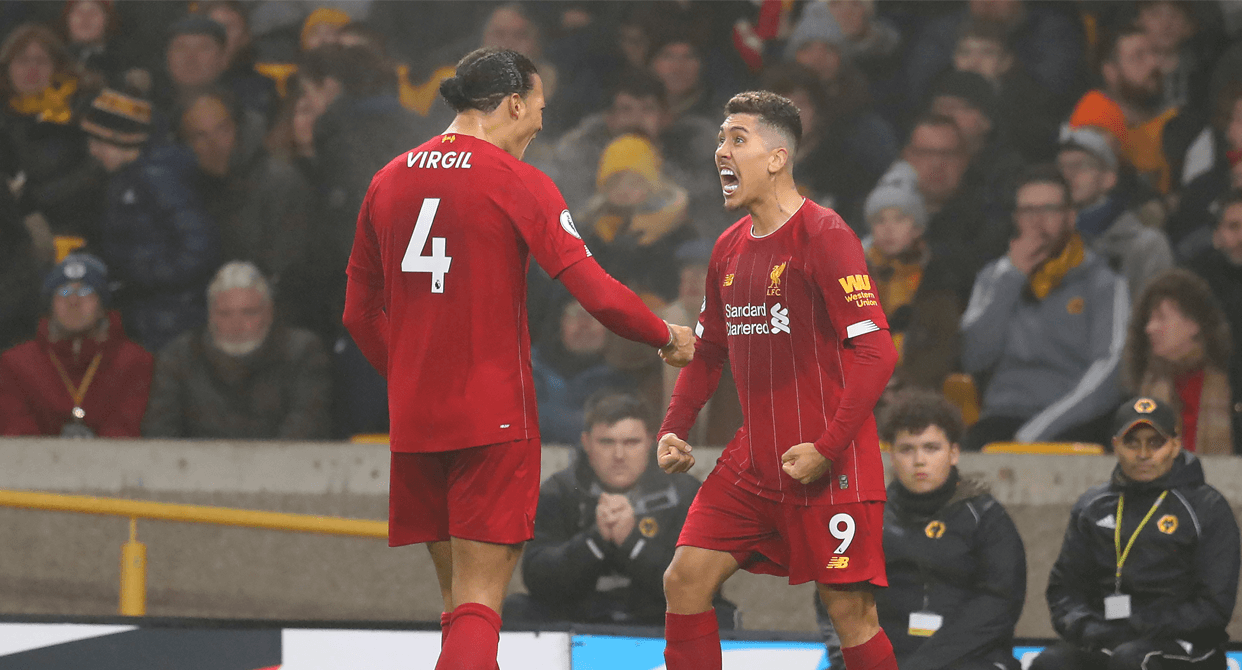 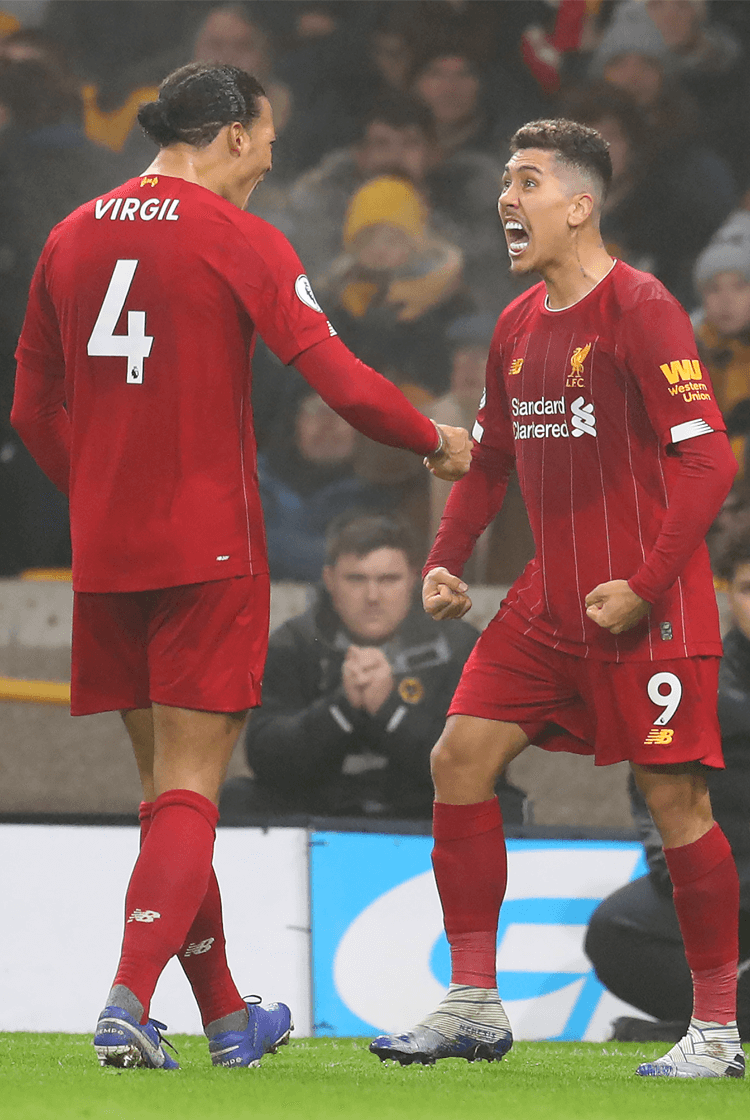 Liverpool moved 16 points clear at the top of the Premier League, in which they also have a game in hand over the defending champions Manchester City, with their 22nd victory from 23 league fixtures. Against only Manchester United have they so far dropped points, but Wolves perhaps came closer than any other to following them, after Raul Jiménez’s second-half header cancelled out Jordan Henderson’s, in the eighth minute. Having also lost Sadio Mané to injury they were consistently frustrated by Nuno Espírito Santo’s team, but Roberto Firmino struck in the 85th minute to ensure that they won a 14th successive league fixture, and became only the third team to go 40 in the Premier League without defeat. “We changed the system two or three times,” said their manager Jürgen Klopp. “We calmed it down. We had incredible chances in the first half, and then at the end it was a magic moment from Bobby. You just have to find a way to win and someone who makes the perfect decision. That was Bobby again.” Liverpool’s record of 67 points from 23 games, incidentally, is five more than any other in English top-flight history. 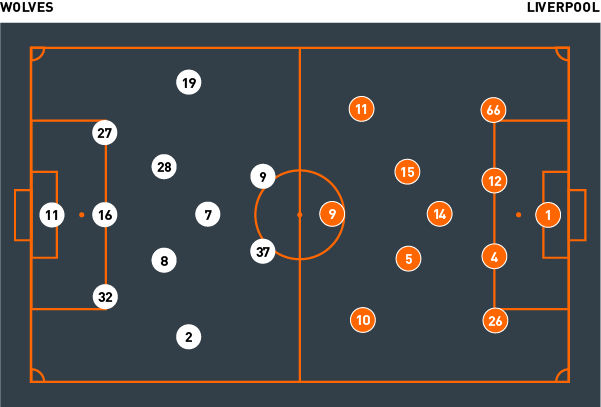 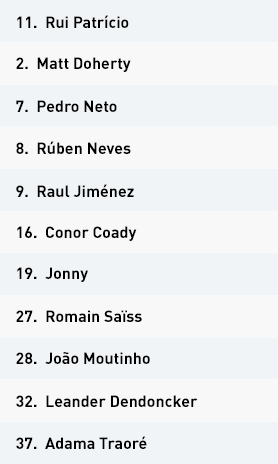 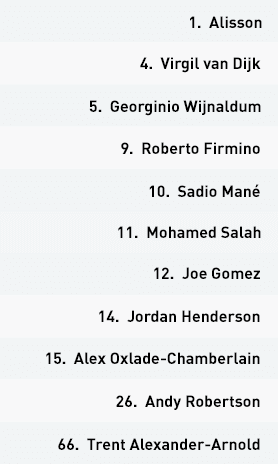 Nuno Espírito Santo organised Wolves into a less-familiar 3-5-2 formation, featuring Pedro Neto as their number 10, behind the front two of Adama Traoré and Raul Jiménez. When they were without possession they adopted a 5-3-2, in an attempt to protect the central areas of the pitch and to limit access to Liverpool’s prolific front three.

The visitors’ adventurous full-backs were therefore encouraged to advance, so Wolves’ defensive shape shifted in their direction, to contain possession towards the relevant wing. That the hosts had an additional central defender proved effective against Liverpool playing aerial balls over their mid-block – largely in response to the lack of passing options their full-backs regularly relish – but for all of their organisation during open play they conceded from a routine corner.

The presence of their powerful front two helped to negate counter-pressure from the visitors following regains within the defensive third. They regularly secured possession, before working it back into midfield and away from a higher point of pressure.

If that approach showed promise they regardless attempted to play around Liverpool’s 4-3-3, and their mid-block, through their wider central defenders advancing to combine with those in front of them. With Neto moving towards the left and Traoré towards the right during the relevant phase of their attempts to build possession, their shape began to resemble their favoured 3-4-3.

Recognising the potential of central midfielders Rúben Neves and João Moutinho, the visitors’ front three adopted narrower positions to limit Wolves’ opportunities to find them, and Wolves therefore played quick passes around Liverpool’s three-strong midfield. When Liverpool advanced they then played more direct balls into the spaces beyond Trent Alexander-Arnold and Andy Robertson, but if they succeeded in carrying possession towards the final third Jiménez became isolated amid their lack of options inside the penalty area.

It took Traoré attacking, and delivering balls into dangerous areas, without the support of Matt Doherty before they were able to truly threaten with the presence of central runners. Neto was quicker to join attacks as a secondary forward, and Doherty supported as a late, inside runner; after Wolves avoided the first line of Liverpool’s pressure, Traoré burst forward, drawing Virgil van Dijk and therefore freeing up Jiménez to score their equalising goal.

Their commitment to their 5-3-2, while they were defending, continued to frustrate Jürgen Klopp’s team. It also took Liverpool adopting a 4-4-2 before Wolves’ attacks again posed less of a threat. While Liverpool eventually secured a second goal, the hosts only showed potential via Traoré’s directness and pace, following disorganised transitions from deeper territory.

Liverpool again adopted Jürgen Klopp’s favoured 4-3-3 formation, while they were both with and without possession. Their full-backs Trent Alexander-Arnold and Andy Robertson had space and freedom to advance into midfield, but once they did so they were confronted with Wolves’ compact 5-3-2, which largely frustrated the league leaders.

Having taken the lead when Jordan Henderson scored with a header following a set-piece, they thereafter struggled to create. Switches of play towards their full-backs were met with Wolves moving to negate those switches, and their attempts to combine beyond Wolves’ defensive block were poor.

Sadio Mané and Alex Oxlade-Chamberlain were guilty of adopting positions in wider areas that offered little to those attempts to carry possession forwards, and while Roberto Firmino’s movement drew the most central of Wolves’ back three, and Mo Salah made runs from inside to out wide and received on the move, goalscoring chances continued to elude them. Mané was forced to withdraw and to track Matt Doherty, and Alexander-Arnold and Oxlade-Chamberlain were drawn by the threat Neto and Jonny posed towards the left.

If Wolves succeeded in penetrating around Liverpool’s 4-3-3, the visitors’ central defenders and goalkeeper largely negated their lone striker Raul Jiménez by sweeping up the direct balls aimed towards him. That wider threat was later confronted with Klopp’s team defending in a 4-4-2, which protected the inside channels, even if Wolves’ wide attackers remained a threat.

The hosts’ commitment to overloading the right side of their attack, and pursuing the final third in the first phase of their build-ups, contributed to their deserved equalising goal. Fabinho’s introduction as a substitute was complemented by Firmino withdrawing from that front two to towards the left, and Liverpool therefore shifting into a 4-5-1 mid-block, ultimately giving them a greater grasp of possession and negating much of Wolves’ attacking potential.

Henderson and Fabinho withdrawing to towards Joe Gomez and Virgil van Dijk encouraged Robertson and Alexander-Arnold to advance more effectively, and with Firmino attacking from that wider position he was able to move into spaces between the lines. Played in by Henderson, it was the Brazilian who then restored their lead, ultimately ensuring their latest win.