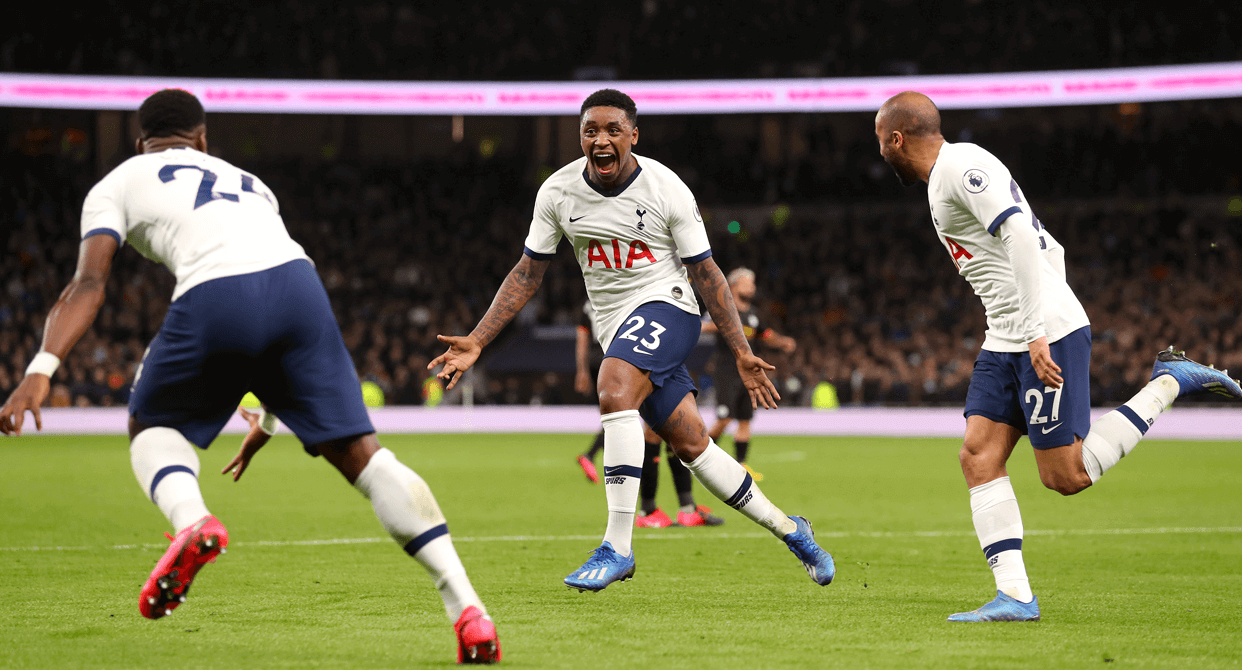 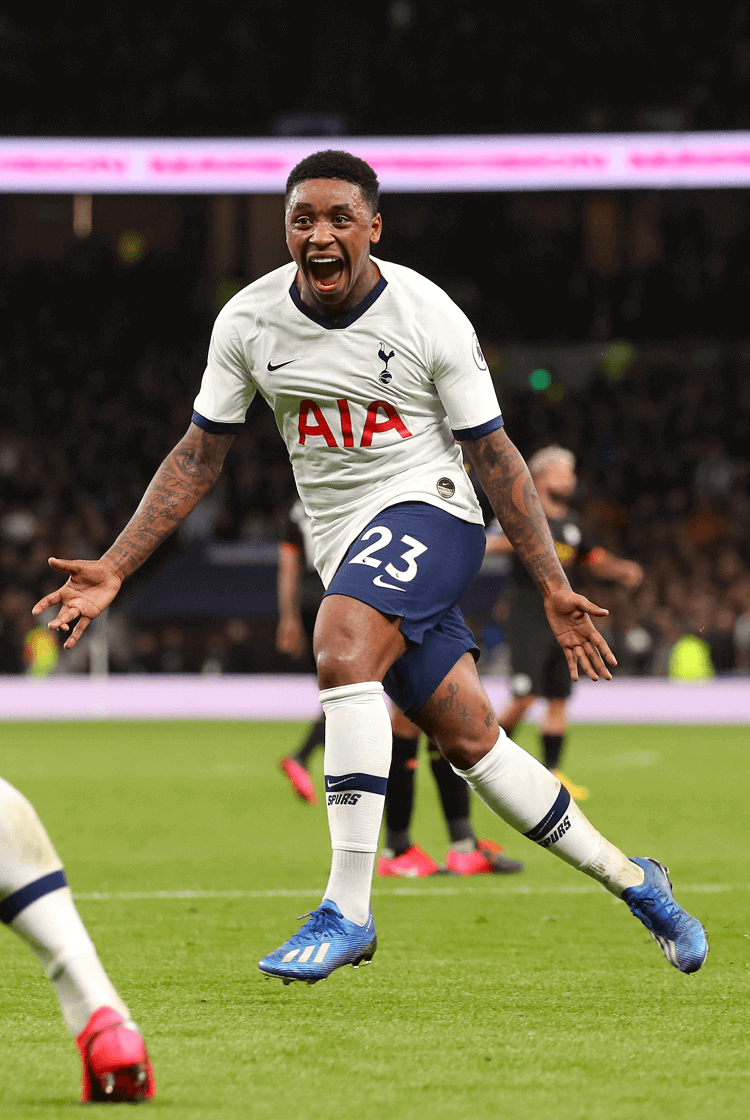 Manchester City were left 22 points behind leaders Liverpool in the race for the Premier League title when a goal from debutant Steven Bergwijn inspired Tottenham to a victory that revived their hopes of reaching the top four. Spurs' finest result since José Mourinho's appointment as manager also came amid a red card for Oleksandr Zinchenko, the Video Assistant Referee awarding City a penalty four minutes after Serge Aurier's foul on Sergio Agüero – Ilkay Gündogan saw his effort saved by Hugo Lloris – and a goal from Son Heung-min putting victory beyond doubt. Mourinho's new team is within four points of replacing a former one, in Chelsea, in fourth place. Discussing his triumph over his long-term rival Pep Guardiola, he said: "With a few draws of people in the same area of the table as us it was very important to get three points. We still have an eye on fourth. It's a pleasure to get three points in a match where we knew it would be very difficult. I have better feelings for Pep than you can imagine. We worked together for three years." Guardiola said: "We did really well. With this performance, how should I be critical? We created chances and conceded few. A few times this season it has happened. The sending off was a key point." 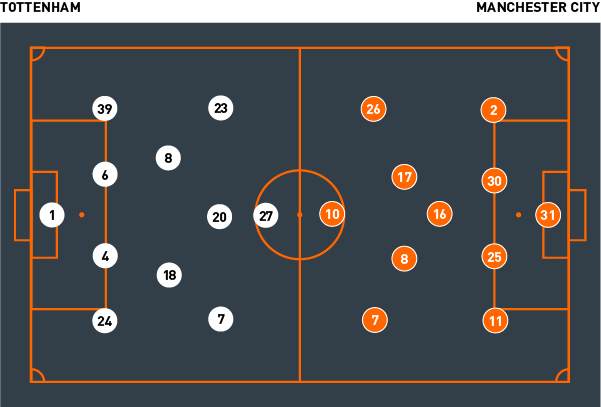 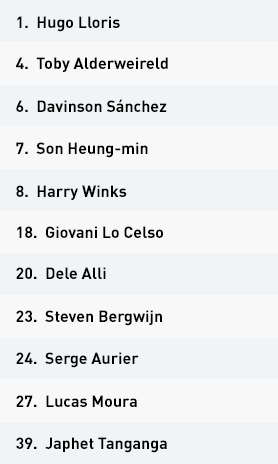 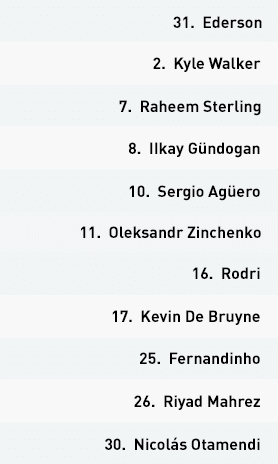 Tottenham were organised by their manager José Mourinho into what was a 4-2-3-1 formation that became a 3-2-4-1 when they advanced with possession, through Serge Aurier drifting from right-back. Giovani Lo Celso and Harry Winks represented the less-familiar double pivot at the base of midfield, against opponents who largely defended with a 4-4-2.

They were encouraged to concede possession and therefore to invite Manchester City to advance, when they would then attempt to attack them on the counter. That Lucas Moura was too often their only remaining attacker when they were defending in deep territory undermined them, because clearances towards him were either intercepted by City, or aerial balls that did not favour his strengths.

On the occasions they had a greater grasp of possession Mourinho's team attempted to release runners in behind with early passes; if those passes did not always find their intended target, when they did there were occasions when Ederson defended well against them, or when City's central defenders negated the threat that the relevant attacker posed. City's desire to use individuals between their opposite numbers contributed to Lo Celso and Winks regularly receiving, but they would then immediately be closed down.


Spurs retained that approach for the second half despite their relative lack of success, and were vindicated when they scored twice in the space of eight minutes amid a wider total of three attempts on goal. Nicolás Otamendi was influential in the build-up to their second when he abandoned his position to close down Erik Lamela before possession had been played to him, ensuring that Son Heung-min could instead be found before he then scored.

City's management of defensive transitions has also been poor. It was a tactical foul by Oleksandr Zinchenko on Winks that led to his red card; their approach had largely involved attempting to prevent counters at the earliest opportunity, through a counter-press and then, if necessary, by committing a foul.

Pep Guardiola demanded Manchester City play with a 4-3-3 formation while they were in possession. Their three-strong midfield comprised of Kevin De Bruyne, Ilkay Gündogan and Rodri, and encountered opponents defending with a 4-4-2, through Dele Alli advancing into Tottenham's front two, and Son Heung-min or Lucas Moura withdrawing alongside Steven Bergwijn into midfield.

Their dominance of possession ensured that their priority became breaking down their hosts' mid-block. Their attacking pattern involved Sergio Agüero withdrawing towards possession and Gündogan, De Bruyne remaining in the opposing half-space in front of Japhet Tanganga to combine with Riyad Mahrez against the left-back, and Raheem Sterling remaining advanced to discourage attempts to follow Agüero.

The striker's movements contributed to the creation of running opportunities for a third number, and combinations with Rodri and Gündogan, before releasing Sterling or De Bruyne; only the intensity of Spurs' defenders in or near the penalty area undermined those attempts to attack. If there was a willingness to allow City's central defenders to have possession there was also a focus on preventing Rodri from receiving it, to frustrate him in his attempts to create, through pressing him and the in-possession central defender.

There was also a focus on preventing Mahrez from cutting inside and on to his favoured left foot, through Tangana and either Son or Bergwijn combining to defend against him; Tangana encouraged him to run wide, and the relevant teammate, maintaining a close distance to the left-back, worked to prevent him from drifting inside. That distance was also intended to tempt him to move between them, when he would then be pressured.

City using two-on-ones in wide areas helped them to advance beyond Spurs' full-backs, after which they would then play low crosses, or cut-backs, but were undermined by their poor execution or Spurs' defending of the penalty area. When they could have threatened on the counter the speed and direction of the passes they played were also too slow, and too flat

Guardiola's team was presented with opportunities to hurt Tottenham on the counter-attack but the speed and direction of their passes were too slow and too flat. Spurs also delayed those attacks by withdrawing to reduce spaces in behind, and by retaining a compact shape.