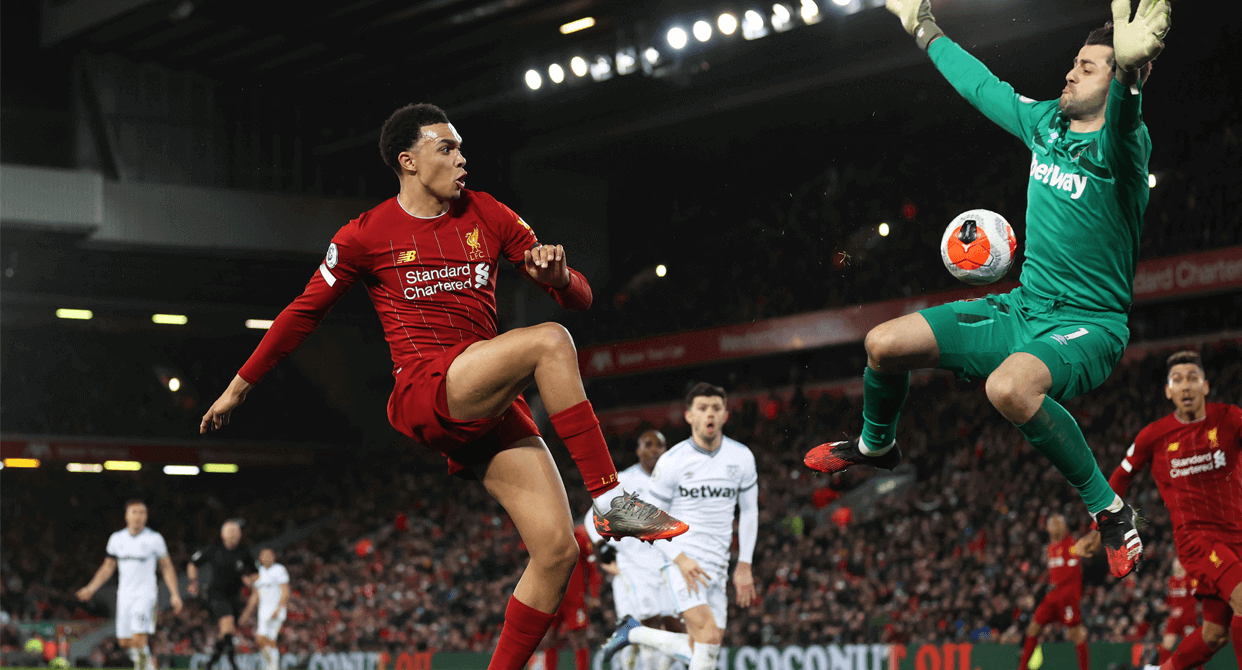 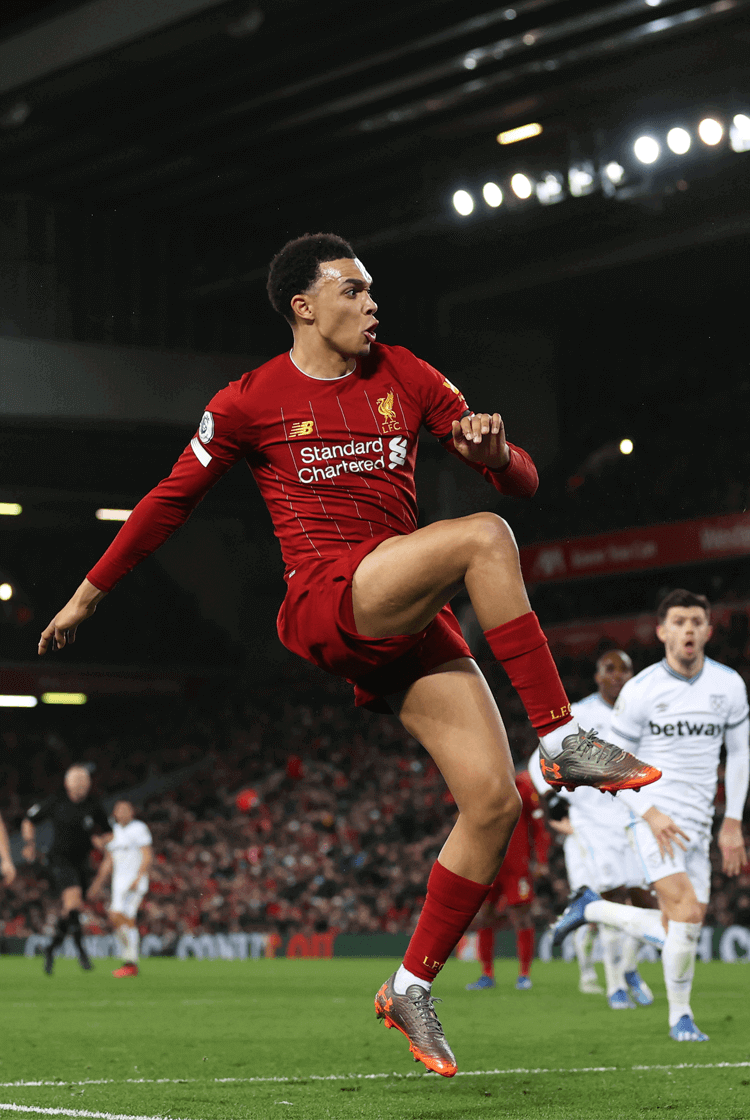 Liverpool took a significant stride towards their first ever Premier League title with a 3-2 victory over West Ham, but not before they were given a scare. They were largely expected to ease to their latest three points, and took an early lead through Georginio Wijnaldum, but they conceded almost immediately when Issa Diop headed the visitors' equalising goal. David Moyes’ side took an unlikely lead through substitute Pablo Fornals, but they could not resist the league leaders for the final half hour; Mo Salah and Sadio Mané scored to subject West Ham to yet another damaging defeat, ensuring that they remain at risk of relegation. "It's so special; the numbers are incredible," Jürgen Klopp said after his Liverpool team equalled Manchester City's Premier League record of 18 consecutive wins. "We wanted to write our own stories; create our own history. Obviously, the boys took that really seriously but it's not too important at the moment. We are just in the situation and want to recover and prepare for the next game." 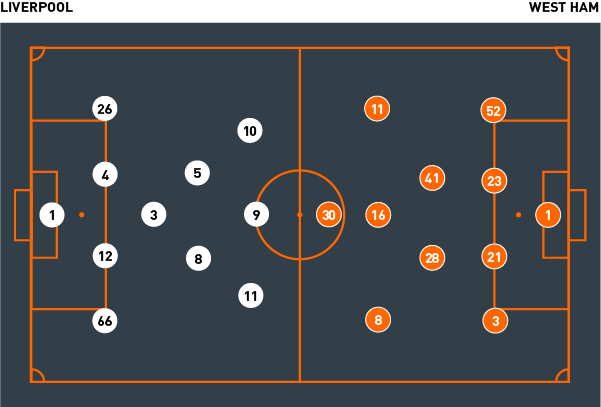 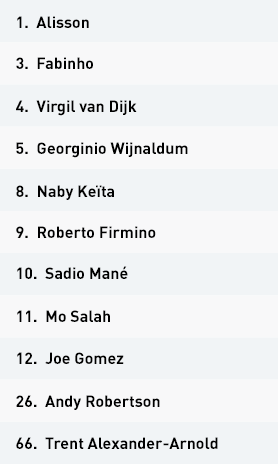 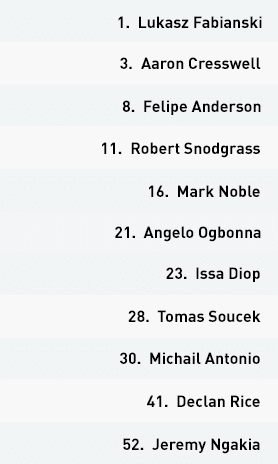 Liverpool were organised by Jürgen Klopp into a 4-3-3 formation in which Naby Keïta replaced the injured Jordan Henderson, completing a midfield alongside Fabinho and Georginio Wijnaldum. They were confronted by opponents adopting a 4-4-1-1 when they were without possession, and whose promising right-back Jeremy Ngakia was making only his second ever Premier League appearance. Mark Noble also featured in an unfamiliar position behind lone striker Michail Antonio.

The visitors showed little interest in engaging with Liverpool high up the pitch, and instead used Antonio or Felipe Anderson to attempt to encourage Liverpool towards one side of the pitch. Mark Noble’s priority was Fabinho, and ensuring numerical parity in midfield, where Declan Rice and Tomas Soucek focused on Wijnaldum and Keïta. It was that focus on individuals that Liverpool had to overcome.

In the first half the hosts' full-backs and central midfielders were separated by significant distances in an attempt to draw their opponents from their positions. With Keïta or Wijnaldum operating in deeper territory, Trent Alexander-Arnold and Andy Robertson advanced; Liverpool’s midfielders had increased space in which to receive possession and to turn. West Ham eventually committed numbers towards the ball, and therefore increased the space between their defence and midfield; Roberto Firmino withdrew into that space to look to receive possession beyond that midfield.


As the first half progressed Liverpool’s central midfielders advanced in pursuit of a second goal and frequently made runs ahead of their attackers. These vertical rotations were intended to unsettle West Ham's midfield; that midfield and defence had to remain in constant communication to cope with those movements, but Liverpool’s final ball too often lacked quality, and they therefore struggled to create goalscoring chances.

In the second half, Sadio Mané and Mo Salah adopted narrower positions. Alex Oxlade-Chamberlain's introduction provided a more direct threat through his attempts to drive forwards with possession, and their full-backs advanced even further to create two-on-one overloads with the relevant ball-side forward up against a defending full-back. These combinations were typically simple one-twos but Liverpool lacked their normal quality; there was an inconsistency in playing to the correct foot of the receiving player, the body position of the receiving player, and the angle between the individuals in question, contributing to goalscoring opportunities going to waste.

David Moyes' West Ham used a 4-2-3-1 while they had possession. Tomas Soucek and Declan Rice formed the double pivot in front of defence, and Michail Antonio – the nominal starting striker – and attacking midfielder Felipe Anderson often interchanged roles. Hosts Liverpool adopted in their usual 4-3-3 throughout.

West Ham were content to let Liverpool have possession, as was reflected in the visitors’ possession total of 32 per cent. They attempted to draw Liverpool into committing numbers forwards and then to exploit the spaces that those movements created. Moyes’ team typically looked to Antonio during transitions but he struggled to exert much influence.

On the occasions the visitors were able to establish possession and looked to build attacks, they targeted their wingers and full-backs in an attempt to create crossing opportunities. Antonio's presence in the penalty area for those crosses provided a moderate threat, but they were at their most dangerous when they won set-pieces and their central defenders were able to advance.

Liverpool's press lacked intensity, and West Ham were therefore able to retain possession for longer periods than might previously have been expected. The visitors were happy to commit numbers forwards, even when they were on course for a point, and they used positional changes to attempt to create space.

Theirs was a high-risk strategy, but one that contributed to their second goal. The introduction of Pablo Fornals was enforced due to an injury to Soucek, but Fornals provided an increased greater attacking threat behind the striker than had Noble. Sébastien Haller was also introduced to give West Ham a target for direct balls, when Antonio instead posed a threat from out wide.