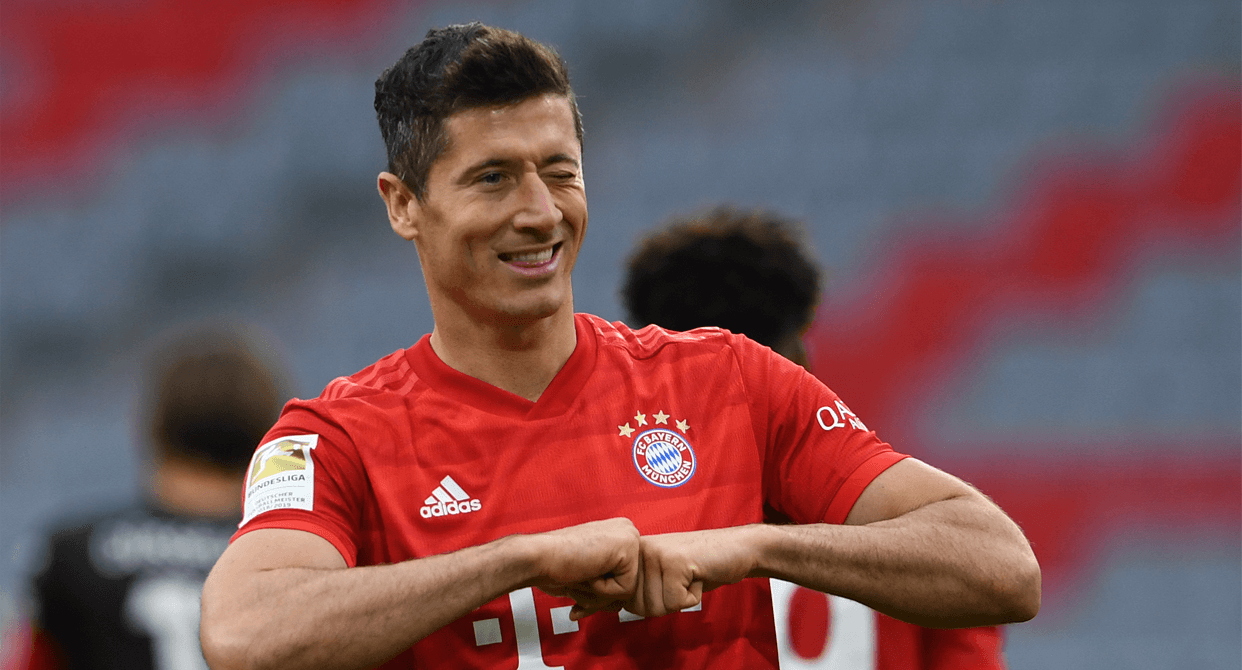 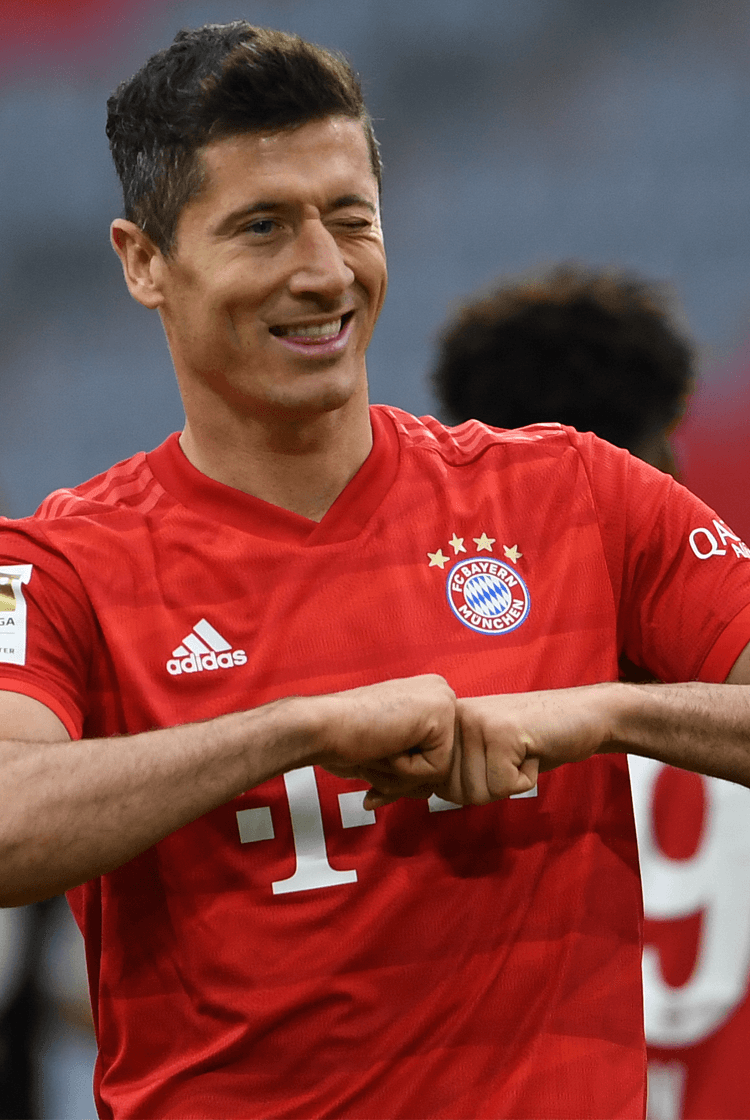 Bayern Munich remain seven points clear at the top of the Bundesliga after securing their fourth victory from four since the resumption of the German football calendar. Only an extraordinary, and increasingly unlikely, collapse will deny them an eighth successive Bundesliga title; they led Fortuna Düsseldorf 3-0 by half-time, following an own goal from Mathias Jorgensen and finishes from Benjamin Pavard and Robert Lewandowski. Lewandowski scored his 43rd goal of 2019/20 in the second half, before the exciting Alphonso Davies added a further finish to make it 5-0. Hansi Flick's team has scored 13 goals and conceded just twice in those four fixtures; they visit Bayer Leverkusen and host Borussia Mönchengladbach in their next two in the league. Mönchengladbach sit third, and Leverkusen fourth. 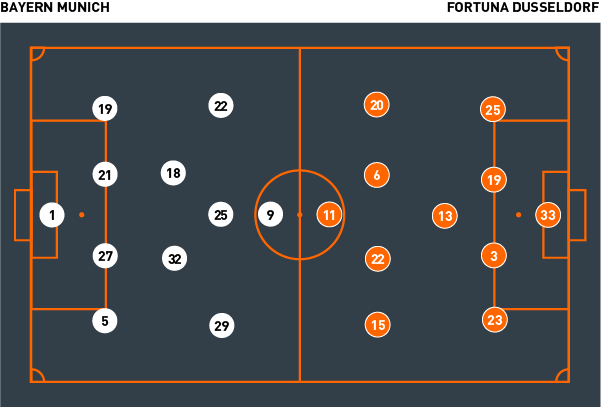 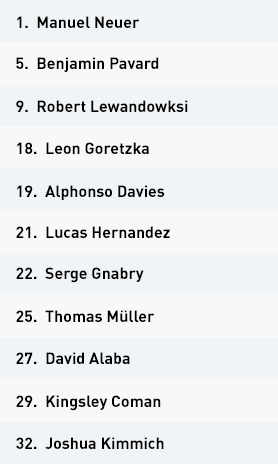 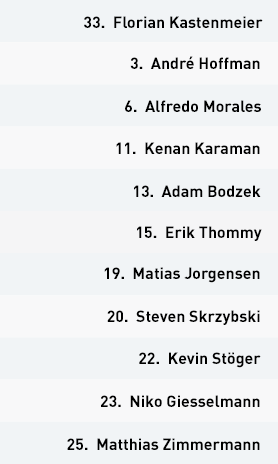 Bayern Munich manager Hansi Flick set his team up in a 4-2-3-1 formation when they had possession. Joshua Kimmich and Leon Goretzka adopted the deep central midfield positions, and Serge Gnabry, Thomas Müller and Kingsley Coman supported Robert Lewandowski in a fluid attacking four. Fortuna Düsseldorf operated in a 4-1-4-1 while out of possession.

Predictably, Bayern dominated possession and encountered a low defensive block. Bayern’s attackers rotated positions constantly in an attempt to disrupt Düsseldorf’s defensive organisation and were successful on a number of occasions. Düsseldorf attempted to use lone striker Kenan Karaman to force possession in one direction so that their defence could move across and defend that side of the pitch. Bayern’s ball-playing central defenders simply switched play between one another and then stepped out with the ball to bypass Karaman, however, and then attacked the midfield line on that side. When a Düsseldorf midfielder advanced to engage one of Bayern's central defenders, a midfielder was left free for the next pass.

Düsseldorf’s defensive and midfield lines attempted to go man-for-man, but Bayern’s movements made it easy for them to create spaces. Coman and Gnabry frequently moved into half-spaces and dragged the relevant full-backs in-field with them, creating spaces on the outside for the overlapping runs of Benjamin Pavard and Alphonso Davies – a particularly influential move when David Alaba or Lucas Hernandez drew a wide midfielder towards them when they brought the ball out from central defence.

Bayern also used increased vertical rotations beyond Düsseldorf’s defence and midfield. If this had previously been common among their front four – largely through Lewandowski withdrawing and Müller advancing – this evolved.


They staggered their central midfielders’ positioning – one was deeper, and the other advanced into a position to support attacks. Vertical rotations between their central midfielders, Joshua Kimmich and Leon Goretzka, and their attacking players regularly led to penetrative runs beyond Düsseldorf's defence – as was seen when Kimmich ran beyond Lewandowksi to create Bayern's third goal.

Düsseldorf struggled with Bayern’s fluid movements; their players were stretched throughout. Those in central positions focused on identifying their greatest threats, but that threat constantly changed, and Bayern exploited opportunities on their opponents’ blindside. Attackers withdrew into deeper positions to create spaces in behind for diagonal balls, and they also relished half-spaces and wide areas, and created chances through cut-backs and low crosses.

Bayern could even have won by an even wider margin. For the second half Düsseldorf defended with a 5-4-1, in an attempt to protect the wide areas and to avoid their defence becoming stretched. The increased numbers they offered between the ball and the goal was intended to reduce the flow of chances and goals.

Fortuna Düsseldorf were organised into a 4-1-4-1 formation, led by lone striker Kenan Karaman, by their manager Uwe Rösler during the periods they had possession. Their hosts remained in their favoured 4-2-3-1 while they pressed; Düsseldorf attempted to play possession out from defence but were often frustrated by that press.

Kingsley Coman and Serge Gnabry attempted to force play into the central areas of the pitch by pressing the visiting central defenders, and were supported in doing so by Alphonso Davies and Benjamin Pavard advancing to towards Düsseldorf’s full-backs. If their pressing approach potentially left them vulnerable to a direct pass in behind their defence, Bayern Munich were offered security by their goalkeeper Manuel Neuer’s willingness to advance and to collect possession, and by the pace those in front could offer him while making recovery runs.


The attacking threat Düsseldorf posed came when they played direct passes and won second balls off of them, but even if a numerical advantage had been created, their hosts’ ability to recover their defensive shape negated the potential they offered. Attempted counter-attacks also came to little, because of Bayern’s ball-oriented counter-press and their management of transitions.

Rösler reorganised his team into a 3-4-3 for the second half – Thomas Pledl and Steven Skrzybski advanced to join Karaman in their front three – with the intention of offering the resistance they had previously lacked. Bayern scored twice in the second half, compared to three times in the first; Düsseldorf also offered more further forwards, largely because of their increased numbers there, but they still continued to struggle to advance beyond Bayern’s defence.