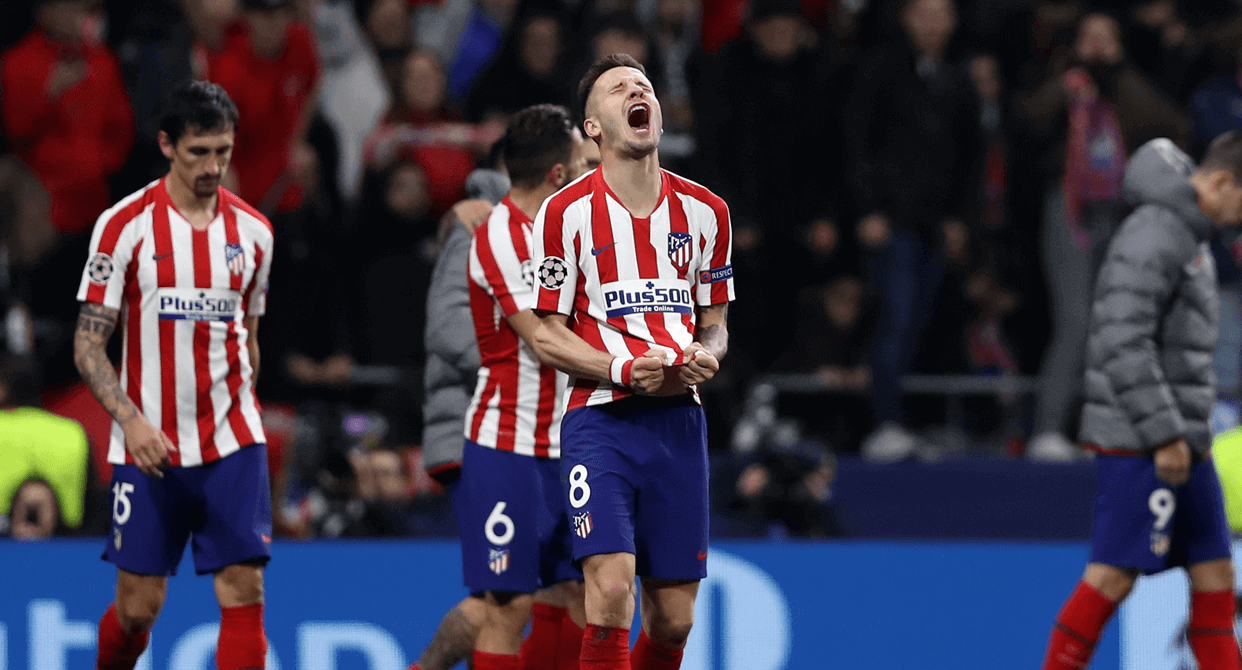 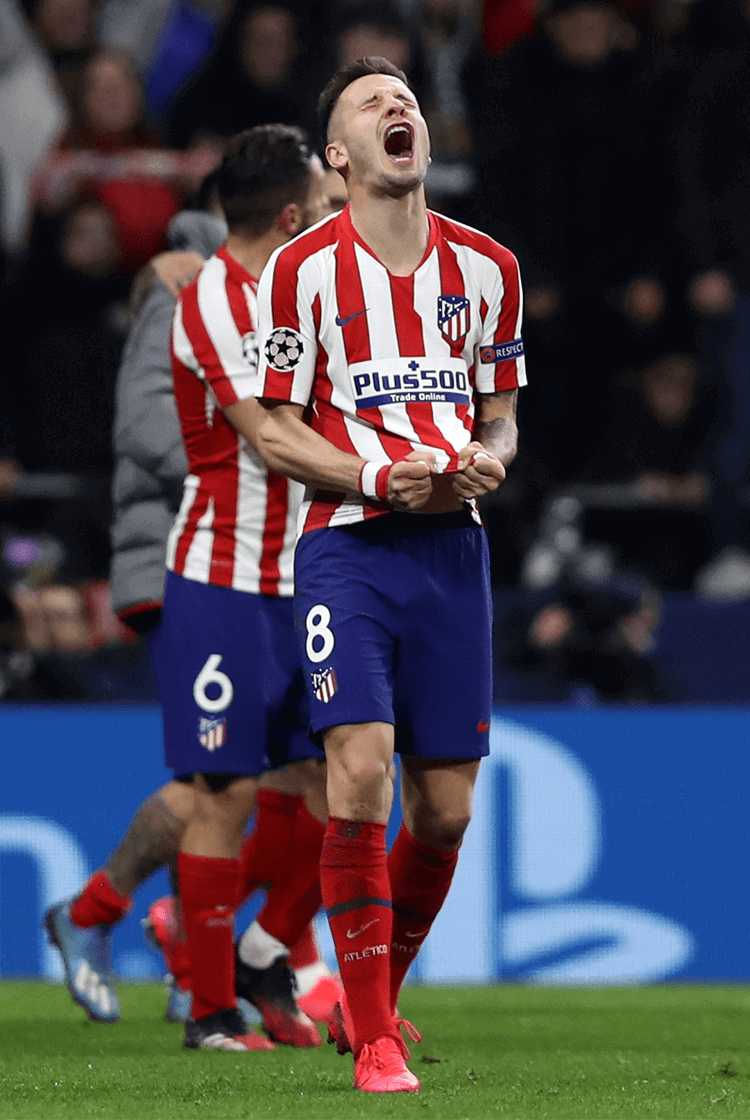 European champions Liverpool were left at risk of elimination from the Champions League at the first knockout stage after losing 1-0 to Atlético Madrid at the Wanda Metropolitano. An early finish from Saúl Ñíguez proved enough as the hosts resiliently defended their lead against perhaps the world's finest team, and one that has so far only lost once in the Premier League. It was ultimately overcoming a first-leg defeat to Barcelona that inspired Liverpool to victory in the 2018/19 final against Tottenham, and they will remain confident of again progressing, but if they are to do so they will have to overcome opponents who so regularly succeed against the odds. "The best side in the world came here and we beat them," said the hosts' manager Diego Simeone. "But it's only one game down, one to go. Liverpool had their chances. They were dangerous, they've got good players all over the pitch." "I had no problem with the result, said his opposite number, Jürgen Klopp. "I saw so many happy faces from Atletico. I get that because it's a big win, but it's not over yet. That's the only thing I feel. I am really looking forward to the second leg." 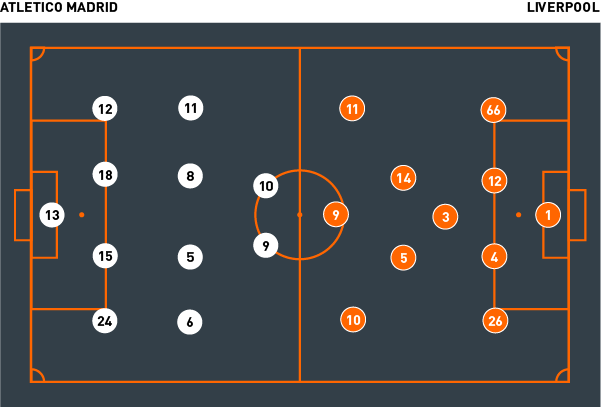 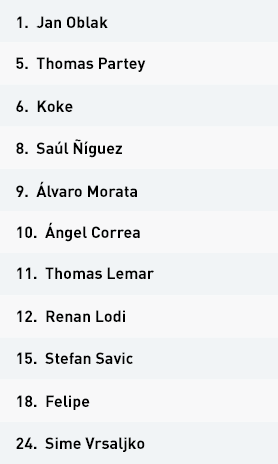 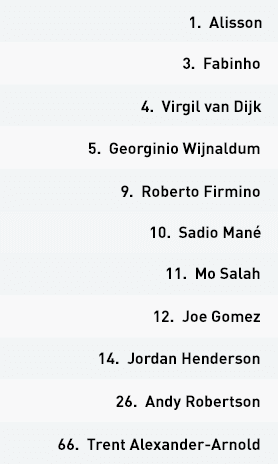 Atlético Madrid were organised by their manager Diego Simeone into their favoured 4-4-2 formation, but on this occasion both of their full-backs were instructed to immediately advance, to pressure their opponents. After an aggressive early spell in which they prioritised crossing, they capitalised on a set-piece to take the lead, when in the fourth minute Saúl Ñíguez finished from close range following a corner. Having taken the lead they then progressed to the next phase of their game plan, in which they focused on preserving that lead via their flat, 4-4-2 mid-block.

Their midfield retained a narrow shape, which denied Liverpool's attempts to play possession in central areas, and they dominated the aerial duels that resulted from them forcing their visitors to play balls into the penalty area from wider territory. The normally composed Trent Alexander-Arnold was particularly under pressure, and his crossing therefore consistently lacked quality.

Simeone's team remained inside their defensive half for lengthy periods against opponents who largely dominated possession, and their front two made little effort to pursue clearances from defence, in order to instead prioritise their out-of-possession structure. Fabinho's ability to gather those loose balls also contributed to them remaining that way.

Their rare attacks thereafter often involved them targeting Liverpool's narrow 4-3-3 via direct switches of play. Their full-backs and wingers combined to create early crossing opportunities, and following those deliveries into the penalty area the nearest attacker drifted from his opposing central defender to create spaces for the other attacker, the far-side winger, and a late-arriving central midfielder.

Liverpool attempted to create overloads within midfield against Atlético's two central midfielders, but they encountered the hosts' two attackers withdrawing, to assist against those efforts. Jordan Henderson and Georginio Wijnaldum offered penetrative runs from central midfield – Atlético also negated those made in threatening positions, and they instead forced Liverpool wide, before resisting increasing pressure to secure an impressive victory and clean sheet.

Liverpool remained in Jürgen Klopp's favoured 4-3-3 formation, despite often struggling once their hosts had taken an early lead via a scrappy goal that followed a set-piece. They responded to thereafter largely dominate possession, but were confronted by disciplined opponents defending with a 4-4-2 mid-block.

Their midfielders Fabinho and Georginio Wijnaldum shared responsibility for withdrawing into central defence, to encourage full-backs Trent Alexander-Arnold and Andy Robertson to advance. Jordan Henderson, the remaining starting midfielder, attacked into the inside right channel, inviting Mo Salah to adopt a more central position from the right of their front three.

For all of their imagination, however, they struggled to advance beyond Atlético Madrid's defence. It was actually their transition into defence, expertly overseen by Fabinho collecting Atlético's clearances, that most impressed.

Further forwards Roberto Firmino drifted to the right as Salah moved in the opposite direction and into the central attacker's position, from where he could offer penetrative runs beyond the hosts' defence. The depth of Atlético's low block largely negated that approach, in the same way that their compact defence denied the attempts of Liverpool's front three to intricately dribble towards goal.

Liverpool's finest goalscoring opportunity came when Virgil van Dijk remained forwards after a corner, and when he therefore troubled the hosts' defenders, Joe Gomez was able to find Salah in a reasonable position, from where he instead headed wide. Diego Simeone's team increasingly prioritised retaining their lead to such an extent that even when the potential existed for them to break from wider positions, they instead resisted, and kept numbers withdrawn.

That Liverpool were largely negating their previous attacking efforts contributed to that. As play progressed the visitors' pursuit of an equalising goal also meant that Divock Origi was introduced, to form a front two with Firmino, but the goal that they sought ultimately continued to elude them.