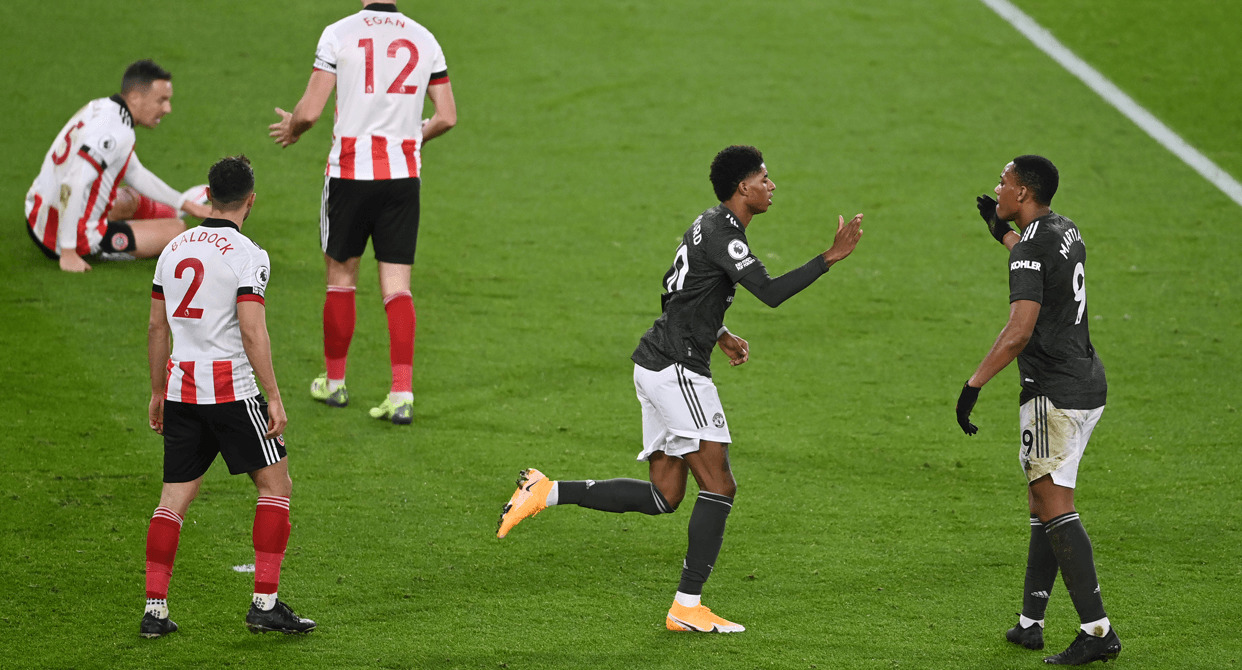 Manchester United maintained their perfect start away from home in the 2020/21 Premier League season with a win at Sheffield United, but once again three points came with a scare. Ole Gunnar Solskjaer’s team have won all six of their away games, but each has been earned after going behind in the first half. On this occasion, it was David McGoldrick who put the hosts in front, scoring after a mistake by Dean Henderson, but two goals from Marcus Rashford and another from Anthony Martial gave Manchester United an unassailable lead. McGoldrick’s late second will have been scant consolation for Sheffield United manager Chris Wilder, who has overseen the worst start by any team in English top-flight history – his side has secured just one point from their first 13 matches. “I'm happy with the manner of the performance,” Wilder said. “We asked questions of some world-class opponents.” “We played some brilliant football,” said Solskjaer. “But we never make it easy for ourselves. The start was too sloppy and slow." 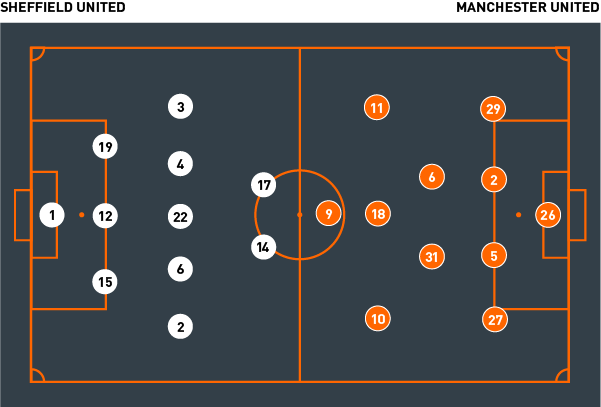 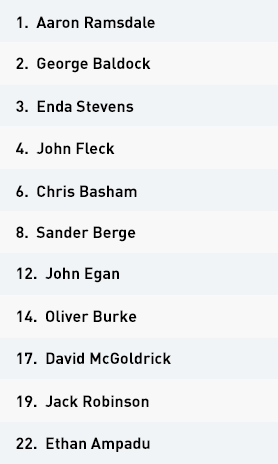 Sheffield United again adopted their manager Chris Wilder's long-favoured 3-5-2 formation, which on this occasion was built on the back three provided by Phil Jagielka, John Egan and Jack Robinson. Their visitors, Manchester United, remained in a 4-2-3-1.

The hosts' limited grasp of possession contributed to them often playing directly from their goalkeeper Aaron Ramsdale, most commonly towards David McGoldrick, who competed against Victor Lindelöf and was supported by their three central midfielders targeting the second ball and Oliver Burke making a run in the hope of a flick-on. Ole Gunnar Solskjaer's team regardless defended well against them doing so.

Anthony Martial, Marcus Rashford and Mason Greenwood pressed the hosts' back three, and their full-backs advanced to take the wing-backs opposite them, essentially forming a man-for-man approach. Only the far-side full-back tucking infield to create a three-on-two against the hosts' front two was excluded from that; their approach regardless suggested that Solskjaer believed that his players would edge those one-on-ones.


Wilder's team also prioritised attacking into the wider areas of the pitch via forward runs off the ball from their central defenders, central midfielders and wing-backs and into the spaces behind Manchester United's full-backs, from where they sought to play crosses into the penalty area. Doing so also increased their hopes of winning set-pieces.

From corners, they attempted to deliver as close as possible to goal, and to put pressure on visiting goalkeeper Dean Henderson – once of Sheffield United. They posed a threat from those set-pieces, as their late, second goal demonstrated.

Manchester United were organised by their manager Ole Gunnar Solskjaer into a 4-2-3-1 formation led by Anthony Martial. Their opponents, Sheffield United, defended with a 5-3-2.

The hosts started aggressively, and worked to press Solskjaer's team high up the pitch. Their front two, David McGoldrick and Oliver Burke, prioritised Victor Lindelöf, Harry Maguire and Dean Henderson, and the three midfielders behind them also adopted aggressive starting positions to take Nemanja Matic and Paul Pogba and to monitor United's full-backs. When the relevant midfielder struggled to reach one of those full-backs, the wing-back alongside him would instead move to press him. The conviction involved in applying that high press led to them scoring the opening goal.

The visitors therefore had to quickly adjust, and they did so via Matic withdrawing into central defence to create a three-on-two that was also supported by Henderson. Matic's positioning meant their defensive line having increased width, and McGoldrick and Burke struggling to press with that same intensity. The half-spaces also became easier to access, and with Alex Telles and Marcus Rashford occupying their opposing wider central midfielder and wing-back, Maguire was in a position to advance from defence to create a two-on-one and to continue to progress possession.


A desire to play early passes in behind the hosts' defence highlighted a weakness in their attempts to track runs or to pass opponents on. Rashford attempted several, including ahead of him scoring their equalising goal. The hosts' defence appeared to be attempting to play their opponents offside and, for all that they initially had some success, doing so against Rashford, Martial and Mason Greenwood, given their pace, represented a risk.

With Greenwood's desire to attack infield and Aaron Wan-Bissaka and Telles regularly advancing, Solskjaer's team often offered six points of attack, in turn causing their hosts' midfield to retreat into defence and gift Pogba time and space to dictate play. Relishing those conditions, Pogba fed Martial in behind as they took the lead.

Manchester United also posed a significant threat on the counter, as they demonstrated when scoring their third goal. With an improved final ball they could have scored more.