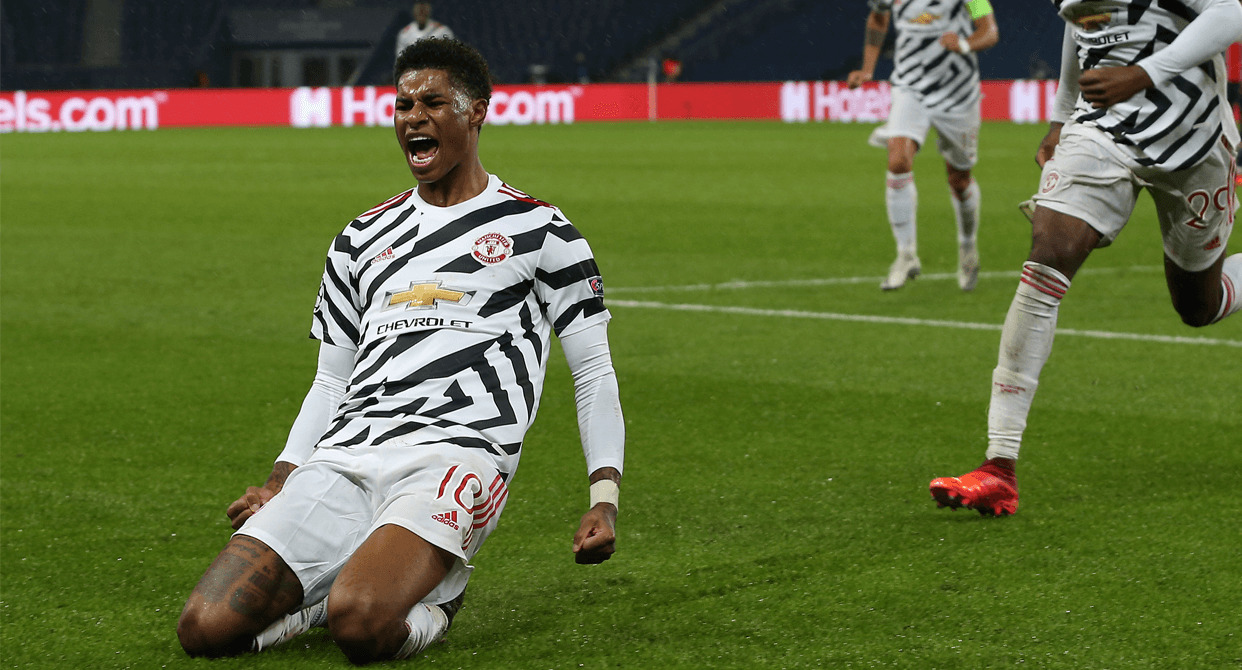 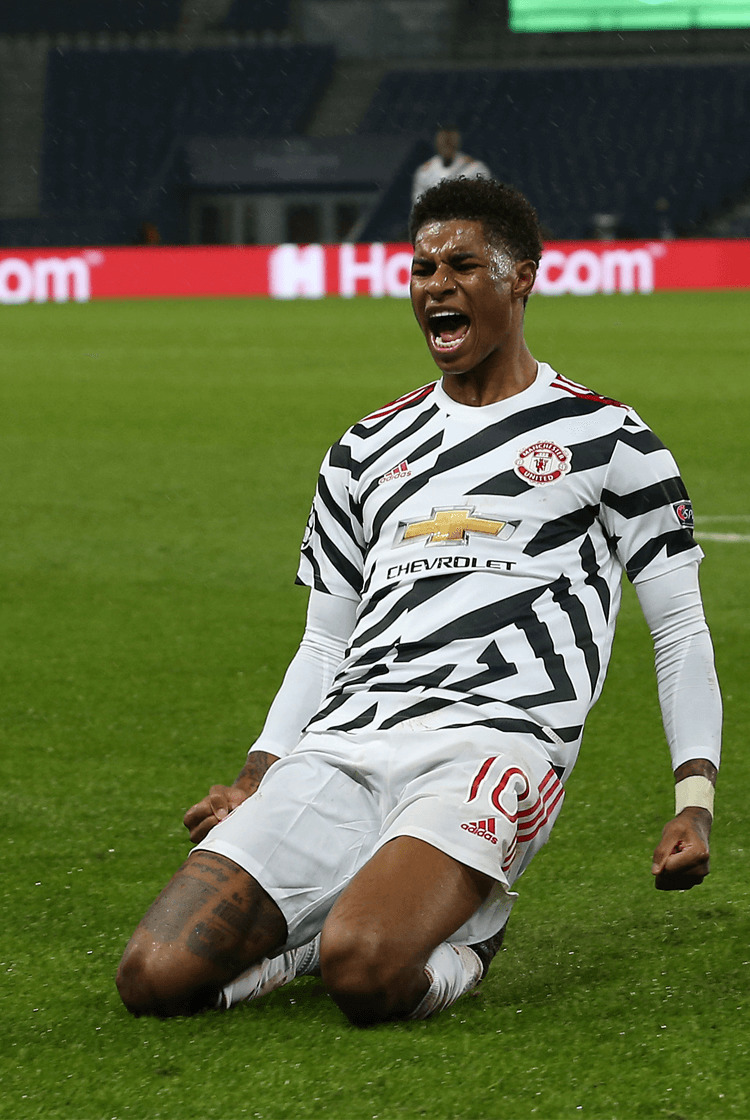 Manchester United made a winning start to their Champions League campaign at Paris Saint-Germain, suggesting they remain capable of challenging Europe's elite. Frustrations that Edinson Cavani was their highest-profile summer signing had contributed to suggestions that Ole Gunnar Solskjaer's promising squad remained short of quality and had placed United's manager under pressure, but he and they emerged with their reputations restored after victory in Paris against last season's finalists. Bruno Fernandes gave United the lead from the penalty spot, and even after Anthony Martial scored an own goal, Marcus Rashford struck to restore their lead and secure all three points. "We deserved to win," Solskjaer said. "When you go away to a team like this against Neymar and (Kylian) Mbappé you have to defend well and your keeper will have to make saves." His opposite number Thomas Tuchel said: "In the first half, we were simply not on the pitch. It was not our level. It was not our level, in moving the ball, in possession, in counter-attacking, in challenges, in intensity. By far, one of our worst games, one of our worst first halves." 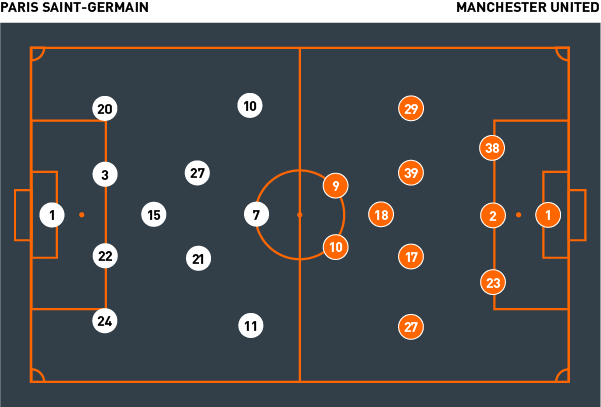 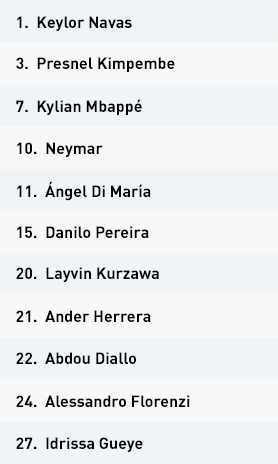 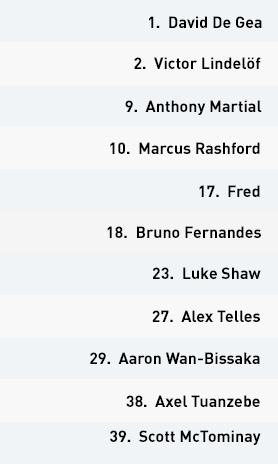 Paris Saint-Germain were organised by their manager Thomas Tuchel into a 4-3-3 formation led by the potent front three of Neymar, Ángel Di María and Kylian Mbappé. Their visitors, Manchester United, defended with a 5-2-3 in which Fred and Scott McTominay formed their midfield two.

United initially favoured an aggressive man-oriented press in which their wing-backs prioritised PSG's full-backs, Marcus Rashford and Anthony Martial focused on their central defenders, and Bruno Fernandes alternated between Danilo Pereira, selected at the base of PSG's midfield, and their goalkeeper Keylor Navas, and they largely frustrated their hosts. Their preferred balls to the feet of Neymar and Di María were confronted with intense pressure, and to the extent that possession was regularly overturned.

Tuchel's team therefore adjusted via Ander Herrera and Idrissa Gueye adopting positions as false full-backs, and their ball-side wide attacker withdrawing into a deeper position to occupy the nearest opposing central midfielder, contributing to an improved grasp of possession. As the first half progressed they increasingly adopted a structure that involved a flat midfield spread across the pitch, their full-backs advancing, and their wide attackers moving infield; United's front three were therefore committed, and their midfield two stretched, creating potential overloads in wide areas and half-spaces.

PSG offered greater potential towards the left, where they used combination play and invited Mbappé to attack one-on-one, but where Aaron Wan-Bissaka was again typically defensively impressively, and also supported by McTominay and Axel Tuanzebe. United also withdrew into a deeper block in an attempt to preserve their one-goal lead, and the spaces PSG targeted were therefore harder to access.


In the second half PSG therefore reorganised into a 4-2-3-1 in which Neymar withdrew into an attacking midfield role and substitute Moise Kean featured as their central attacker. Neymar's presence there contributed to him more regularly combining to create overloads in midfield without sacrificing the depth and presence Tuchel sought in the final third. Herrera's movement off the ball, after releasing possession, also tested United; once he had played it to a teammate he'd make a penetrative run on the blindside of an opponent. Neymar's willingness to move to encourage combinations also created three-on-twos against United, increasing the threat posed by those movements.

United responded through Fernandes pressing the ball-side central midfielder and either Rashford or Martial occupying the second midfielder so that Fred and McTominay remained free to prioritise Neymar. Later still they adopted a 4-3-3 and introduced Paul Pogba to play in midfield. The three that existed in midfield, behind Fernandes, meant increased pressure was applied to PSG's central defenders and reduced the potential of the numbers and movements PSG had been offering in central areas. By the wider midfielders in that three also engaging with PSG's full-backs, United's full-backs remained withdrawn, and therefore occupied the spaces that PSG would otherwise have relished.

As is often the case against their highest-quality opponents, Ole Gunnar Solskjaer set Manchester United up into a 3-4-1-2 formation. Axel Tuanzebe, Victor Lindelöf, and Luke Shaw featured in central defence, and Aaron Wan-Bissaka and Alex Telles were their wing-backs; they encountered opponents playing with a 4-3-3.

Thomas Tuchel's Paris Saint-Germain applied a man-oriented press that involved their front three pressing United's back three, and similarly operating man-for-man in midfield. If the relevant full-back advanced to press United's wing-back, those alongside him in defence shuffled across to remain compact; if that left the opposing wing-back free, he was also not in a position where he could easily receive a switch of play and attack because he would need to receive an aerial ball, giving PSG's defence time to adjust.

United instead sought to build through PSG, by playing on the outside of their midfield and into the feet of Marcus Rashford and Anthony Martial, who were comfortable receiving under pressure with their back to goal and sought to turn and advance or set possession and combine. It was one attempt to turn and advance that led to the penalty being won and Bruno Fernandes scoring their opening goal; Fernandes also regularly moved to towards the receiving forward to receive their set pass; first-time passes outside to an advancing wing-back were also common.


Fernandes complemented the ball-side forward by offering contrasting movements to his in an attempt to stretch PSG's defence and create spaces in the final third. A further form of attack came during moments of transition; United threatened, but ultimately didn't find the finishing touches when doing so. Their counter-attacks were more common towards the right, and most regularly involved balls being slid outside of the relevant defender into the path of a diagonal run from Rashford. The following pass then too rarely offered the necessary quality, and so rarely led to a goalscoring opportunity.

When in the second half they reorganised into a 4-3-3, Fernandes operated similarly to a false nine and Rashford and Martial remained advanced. Fernandes' positioning gave United the option of creating four-on-threes in midfield to advance beyond PSG's and create, as they did when Rashford scored his winning goal.