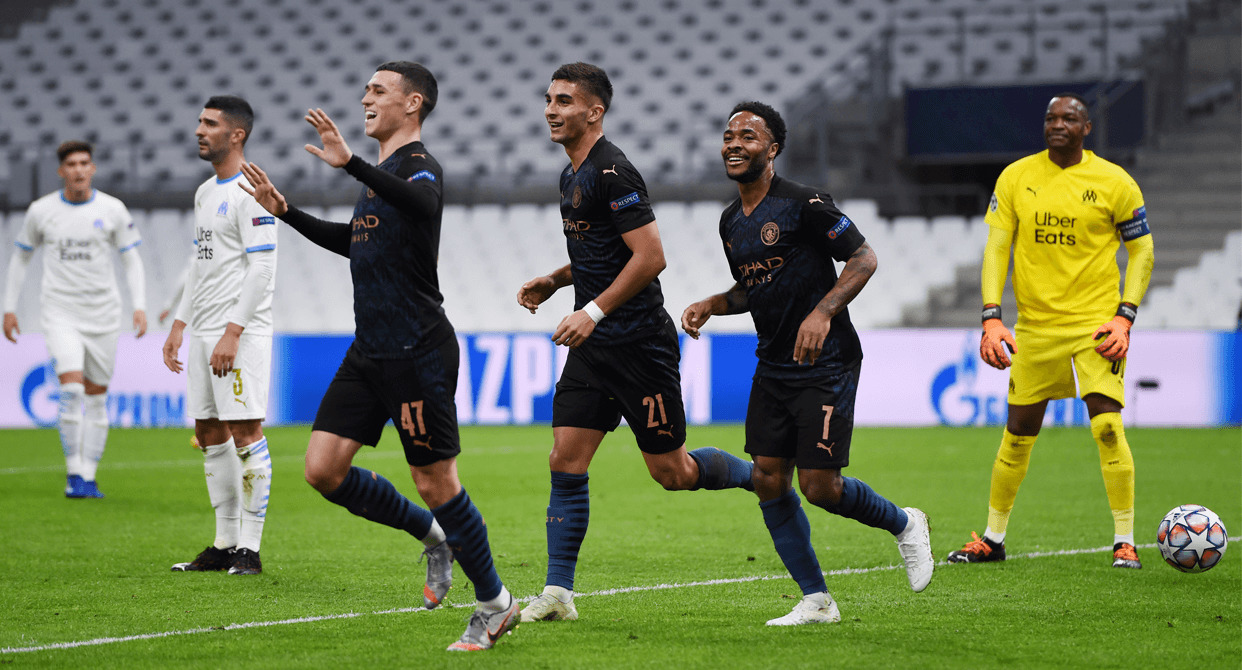 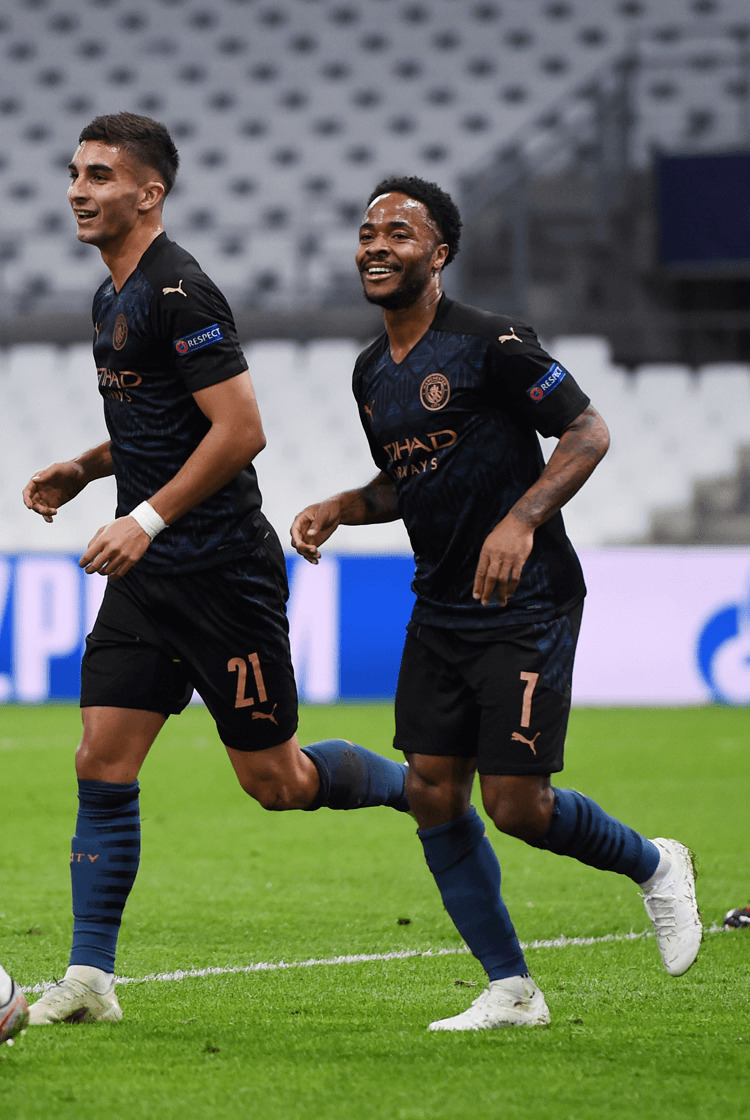 Manchester City eased to a second victory from two in the Champions League, dominating possession in Marseille and being rewarded with goals from Ferran Torres, Ilkay Gündogan and Raheem Sterling, and ultimately three points. Ferran's was the only goal of the first half, and came after Kevin De Bruyne advanced behind Marseille's defence and squared to leave him with a routine finish. After Oleksandr Zinchenko struck the post towards the end of the first half, City's lead was doubled in the second when Gündogan struck from Sterling's knockdown. De Bruyne created City's third, scored by Sterling, in the process demonstrating that the absence of the injured Sergio Agüero may not be as damaging as some had feared. "It is important to start the Champions League with two victories," said City's manager Pep Guardiola. "We are close now to being in the last 16 but still we are just in the beginning, improving." His opposite number, André Villas-Boas, said: "It was a tough match to play and we paid for our mistakes, but we didn't defend too deep and my players were exceptional. The second goal was a real blow for us as we were starting to turn things around. In the first half, we had trouble getting through the City press, and a bad pass led to them being 1-0 up." 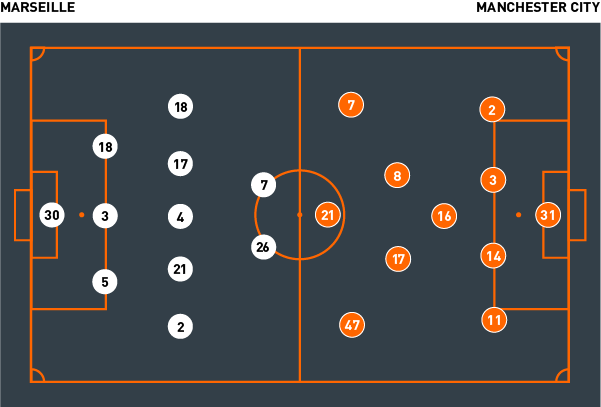 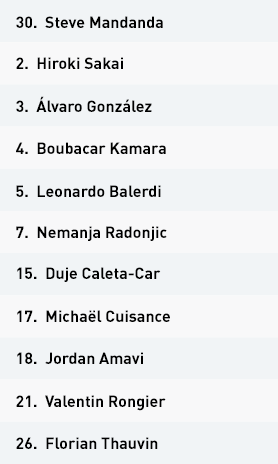 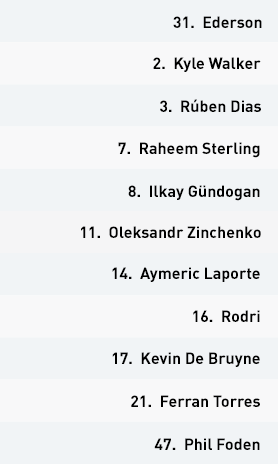 André Villas-Boas set Marseille up into a 3-5-2 formation led by the front two of Florian Thauvin and Nemanja Radonjic. Their visitors, Manchester City, defended with the same 4-3-3 formation they used when they also had possession.

Marseille were willing to concede the ball and prioritise staying in contention for a draw or victory for as long as possible. They initially sought to build from the back, but were uncomfortable doing so against City's aggressive press and counter-press, so their goalkeeper Steve Mandanda instead sought to play longer passes. Those longer passes regardless rarely reached a teammate with the first or second ball, so City were again quickly able to regain possession.

When they were attempting to build, Álvaro González was instructed to move into midfield from defence and to form a double pivot alongside Boubacar Kamara, creating a four-on-three against City's midfield, so City adjusted by Ferran Torres adopting a position between González and Kamara to prevent them from passing to each other. If González instead remained in central defence, City's front three pressed Marseille's three central defenders and screened passes into their wing-backs, maintained a man-for-man approach in midfield, and required the relevant full-back to press the wing-back opposite him.


If Villas-Boas' team instead sought to play through the central areas of the pitch, Michaël Cuisance adopted a position on the blindside of Ilkay Gündogan, who too often was guilty of moving to affect a pass that hadn't yet been played and therefore left Cuisance in a position to receive between the lines. Once possession had been advanced beyond City's midfield, Marseille's front two would split and attack the spaces on the outside of their opposing central defenders, creating two one-on-ones and a large space between them, but Rúben Dias and Aymeric Laporte were comfortable defending against them doing so.

Marseille recorded only two shots; both came from outside of the penalty area, and at a xG total of 0.05. Their approach was far from to dominate possession or create numerous goalscoring chances against Pep Guardiola's team, but those they created needed to be of an improved quality for that approach to concede.

Manchester City were organised by their manager Pep Guardiola into their favoured 4-3-3 formation, that on this occasion, in the absence of the injured Sergio Agüero, was led by a front three of Raheem Sterling, Phil Foden and Ferran Torres. They encountered opponents who defended with a 5-3-2 and a compact and organised block.

City dominated possession, so Marseille regularly sought to position Rodri between their front two and to retain their compactness in an attempt to protect the central areas and half-spaces, and to force play wide. Once they did so their wing-backs would prioritise the wide attacker opposite him; the ball-side central midfielder moved to City's attacking midfielder, and the ball-side forward screened Rodri, encouraging City to return possession to central defence.

Guardiola's team recognised the need for patience, and demonstrated it by circling the ball in defence. With Marseille's three midfielders struggling to cover the ground demanded of them when City moved possession from one side of the pitch, City began to target the relevant half-spaces and playing around them. They had to remain disciplined in midfield to do so; their far-side attacking midfielder needed to remain in the relevant half-space and on the outside of Marseille's midfield if their passes were going to be effective. When the ball was controlled in the half-space, a further pass was attempted between Marseille's defence into the runs of Ferran or another attacker, though Marseille's defence made their desired movements and passes difficult to execute.


City, not unusually, sought to attack with five players – their three forwards and two attacking midfielders – and to retain their other five outfielders behind the ball. Doing so provided significant security against the threat of counters, and contributed to Marseille's struggles to create goalscoring chances. Their far-side full-back moved infield when they had possession, providing additional security and also remaining available for their gradual switches of play that involved the ball being moved more quickly and forcing the hosts into further positional adjustments, by extension creating spaces in their structure.

André Villas-Boas' team regardless remained largely compact and organised in defence. They were content for City to have possession – even if they had it beyond midfield – as long as their defensive line was preserved, also making it difficult for City to create. It took City capitalising on the smallest mistakes they made for them to score. Their first goal came in a counter-pressing moment; their second and third after Marseille took some risks and defended slightly more on the front foot. Hiroki Sakai moving two steps to the right too early left the space Foden required to create their second, and the third came when they engaged City further forwards and left increased spaces to penetrate through.

The scoreline perhaps did not reflect the extent to which Marseille's approach almost succeeded. Conceding the first goal ultimately forced them to sacrifice some of their defensive discipline in an attempt to score one of their own, and it was that that City punished.