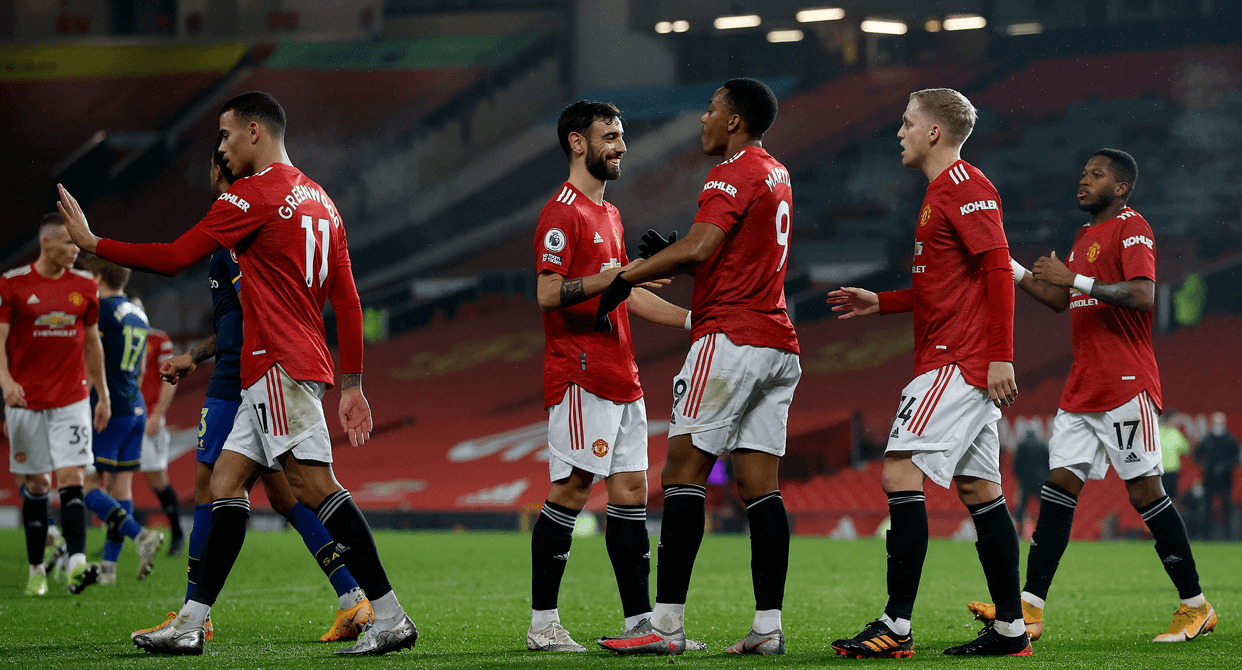 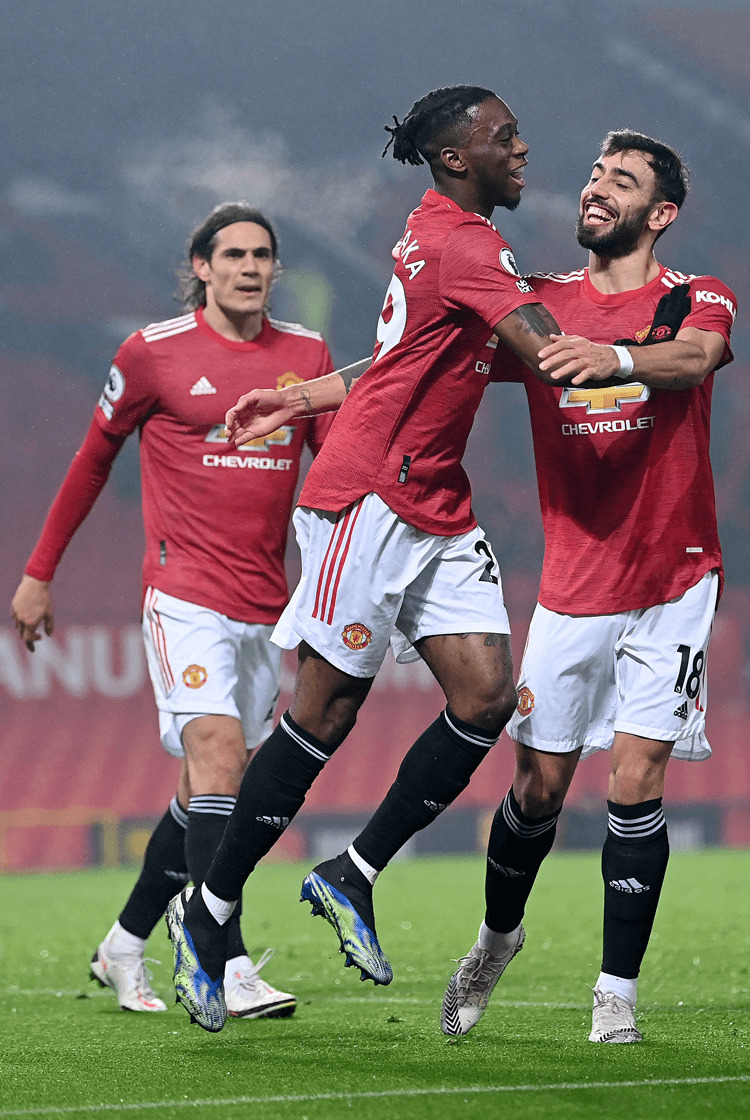 Manchester United equalled a Premier League record by beating Southampton's nine men 9-0. Alexandre Jankewitz, making his full league debut, was sent off in the second minute, further weakening Southampton's already injury-hit team, and by full-time Jan Bednarek had also received a red card, ensuring United equalled their own record – set in 1995 when they won 9-0 against Ipswich Town and matched during 2019/20 when Southampton lost 9-0 to Leicester. The Video Assistant Referee (VAR) intervening to rule out Che Adams' second-half finish, and to ensure Bednarek also received a red card, will have further frustrated the visitors on an evening when Aaron Wan-Bissaka, Marcus Rashford, Edinson Cavani, Scott McTominay, Bruno Fernandes and Daniel James all scored once. Anthony Martial scored twice, and Bednarek contributed an own goal. "It is horrible," said Southampton's manager Ralph Hasenhüttl. "But we stood up after the first 9-0 (against Leicester) and we have to do that again." His opposite number, Ole Gunnar Solskjaer, said: "We know, better than anyone, what goal difference can do to you because we have lost the league on goal difference." 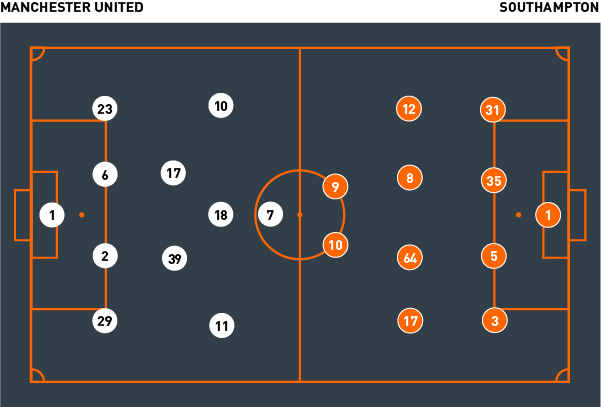 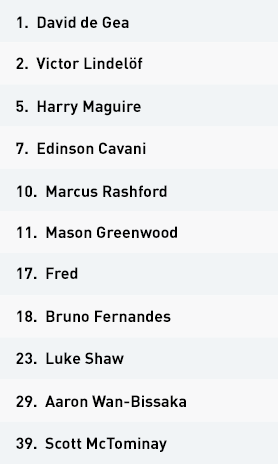 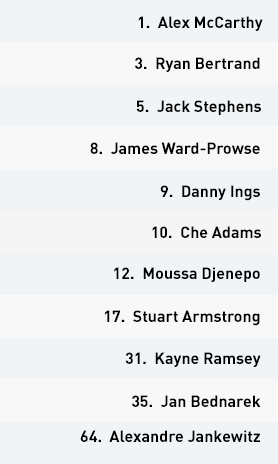 Manchester United were organised by their manager Ole Gunnar Solskjaer into a 4-2-3-1 formation led by the one-touch play of Edinson Cavani and the speed and width provided by Mason Greenwood and Marcus Rashford. Their visitors, Southampton, were forced to defend with a 4-4-1 from the point of Alexandre Jankewitz's red card in the second minute, and they did so via Danny Ings withdrawing into midfield.

It quickly became apparent that United were attempting to build overloads towards the left, where Rashford and Luke Shaw, adopting a high and wide position, were creating two-on-ones, stretching Southampton and creating attacking options that included playing into the feet of Cavani, delivering cut-backs, or switching play to Aaron Wan-Bissaka. Both Wan-Bissaka and Shaw sought to move high and wide, or to attack into the inside channels to create space for Rashford and Greenwood to attack into at pace.

United spent significant periods of the first half in the central and final thirds. When moving possession from the left to the right Fred and Scott McTominay created a double pivot towards the edge of Southampton's 18-yard box that encouraged switches of play, maintained the quality of the hosts' possession, and even encouraged shots from distance. There were also moments when they capitalised on the mid-to-low block with which Southampton were defending; when Rashford scored their second goal he created space by remaining relatively stationary while the opposing defenders moved back; Cavani did similarly before drifting behind Jack Stephens, then distracted by Shaw.


Anthony Martial replaced Cavani at half-time, when Donny van de Beek came on for Shaw, which meant Fred moving to left-back and Van de Beek to alongside McTominay at the base of midfield. At 4-0 down, Southampton adopted a lock block via Che Adams moving back into midfield and Stuart Armstrong into defence and their shape becoming a 5-4-0 intended to prioritise defending the width of the penalty area.

That they did so then forced United to adapt. Harry Maguire and Victor Lindelöf adopted more advanced positions, owing to Southampton's reduced threat on the counter, and McTominay increasingly operated as their solitary defensive midfielder; balls were also played into the feet of their attacking players, instead of into the spaces that may have previously existed behind Southampton's defence. When transitioning into possession in the central third they then patiently moved the ball from right to left, and Martial, drifting into the spaces between Southampton's central defenders, became their ultimate target.

Jan Bednarek's red card meant Southampton then defending with a 5-3-0, and United being gifted an abundance of space in the wide areas of the pitch. Their eighth and ninth goals came after they attacked with width, and stretched Southampton's weakening defensive shape.

Ralph Hasenhüttl, who was without several first-team players, set Southampton up into his long-favoured 4-4-2 formation. Manchester United remained in their 4-2-3-1.

The early red card given to Alexandre Jankewitz forced Southampton to almost immediately instead play with a 4-4-1, and to abandon potential plans to be expansive. After just 16 minutes they had executed 22 passes to United's 107; they struggled, throughout, to retain the ball.

Their limited attacking options also meant them then playing with a direct approach, and seeking to sit in a mid-to-low block from which they absorbed pressure before trying to attack with pace. They first threatened when James Ward-Prowse tested David de Gea from a free-kick.


In the second half Che Adams found the back of the net following a further set-piece, but the intervention of the Video Assistant Referee (VAR) meant that his finish was ruled out for offside. Despite being outnumbered, they remained determined to maintain a quality level of possession. Attempts to move the ball from right to left were prevented by United's relentless pressing and pressure, however.

In the 72nd minute, when they built from the back and Moussa Djenepo demonstrated positive, forward movements to attack from towards the right, their best chance was created from open play. By then, however, defeat was already beyond doubt.