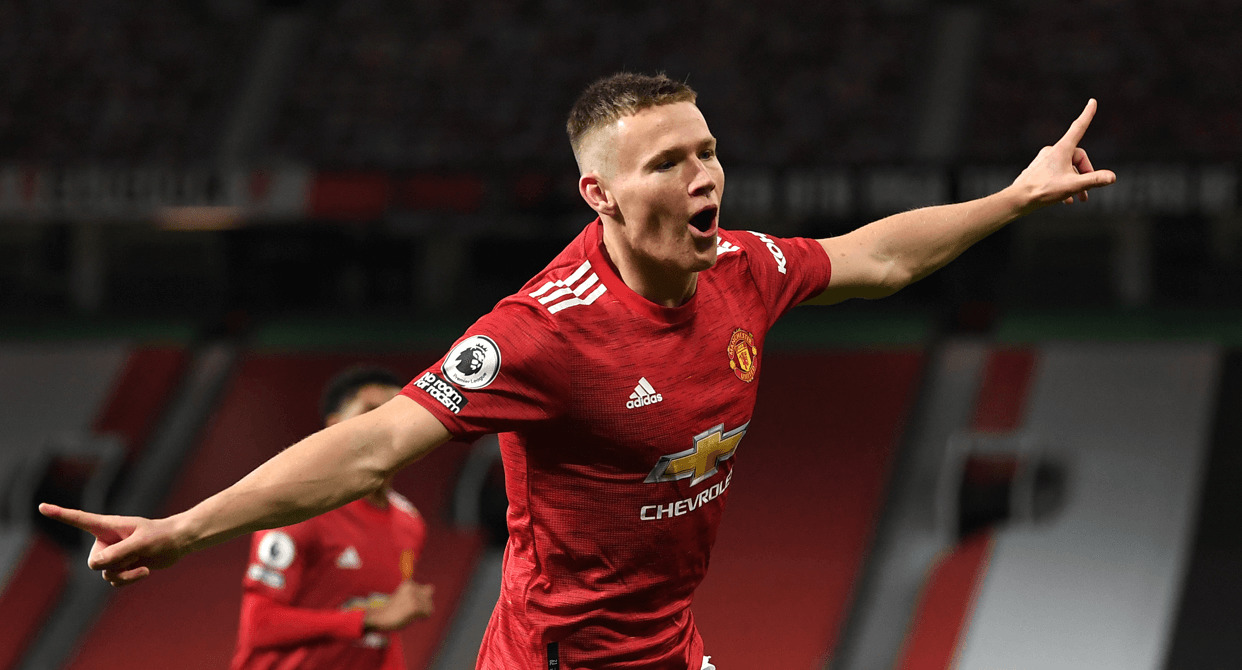 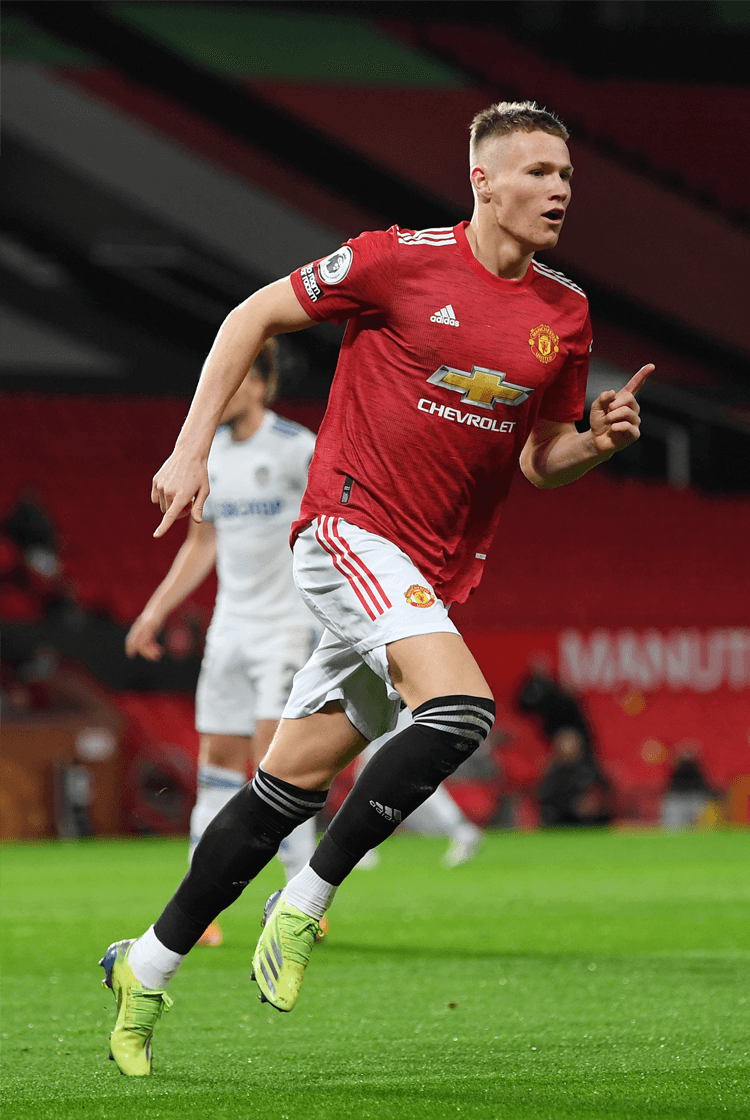 Manchester United climbed to third in the Premier League with a convincing victory over their rivals Leeds, largely owing to two goals from Scott McTominay. The Scotland midfielder became the first player in the competition's history to score twice inside the opening three minutes – the first came after only 67 seconds – and, with further finishes from Bruno Fernandes and Victor Lindelöf, United built a four-goal lead. Liam Cooper's header gave Leeds a goal before half-time, but Daniel James struck 20 minutes into the second half and Fernandes scored again from the penalty spot, putting victory beyond doubt and ensuring Stuart Dallas' effort was little more than a consolation. "Leeds play the same way whether they're 4-0 up, 4-0 down or at 0-0," Ole Gunnar Solskjaer said. "They do that every three days, every game. You have to run until the whistle goes." Leeds manager Marcelo Bielsa said: "We could have come back throughout the game, there were always opportunities to come back into it. We lacked efficiency; they scored their opportunities and we didn't." 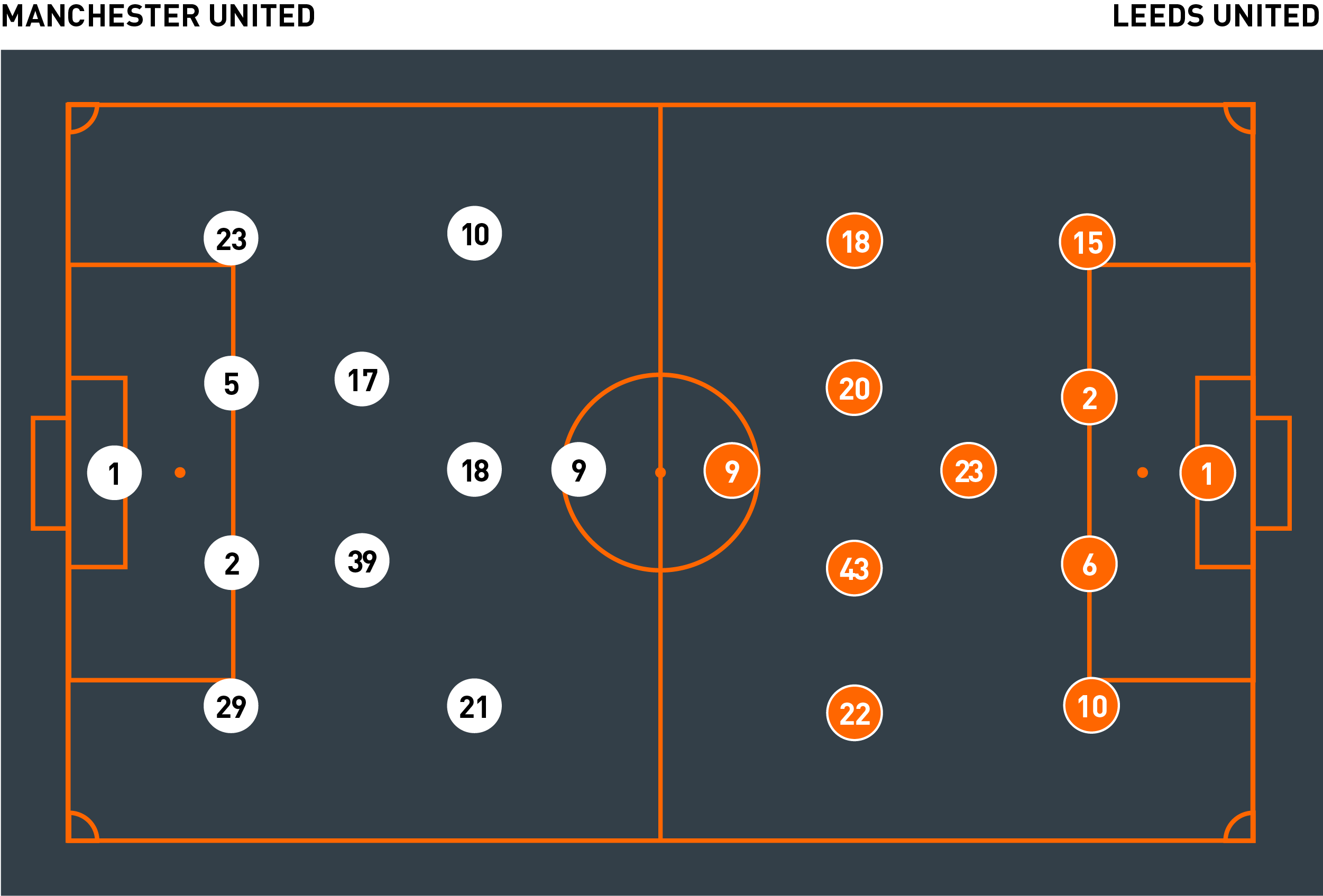 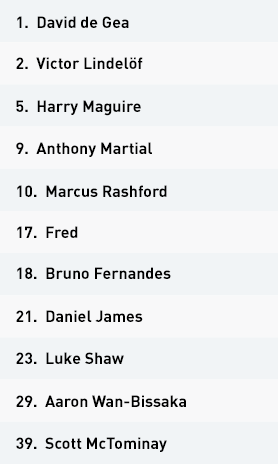 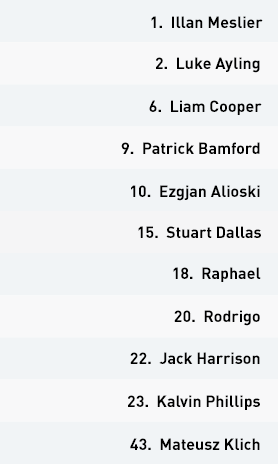 Manchester United were organised into a 4-2-3-1 formation led by Anthony Martial, and that on this occasion featured Daniel James as their right-sided forward. Their visitors, Leeds, defended with an aggressive, man-oriented press from their 4-1-4-1.

United anticipated encountering a high-intensity press, so at goal-kicks they adopted positions as though playing short from their goalkeeper David de Gea, but he instead played long, forcing Leeds to apply their press over a significantly increased area, and ensuring that the first and second contacts came near the halfway line. The larger spaces that existed also freed up the potent Martial, Marcus Rashford and James to attack their opponents one-on-one.

Ole Gunnar Solskjaer's team also regularly played possession forwards, and the ball player regularly complemented those passes with a run on his opponent's blindside once that opponent's focus had moved to the ball. Fred and Scott McTominay did so from the base of midfield even more regularly than United's full-backs, who normally frequently advance; those same forward runs perhaps surprised their opponents, and were also effective in creating the third man in potential combinations. Their effectiveness contributed to the two goals McTominay scored in the opening minutes.


Leeds' press was intended to force United backwards and sideways; it targeted those receiving with a closed body, or slow passes that meant that they could potentially launch a counter. United, in turn, attempted to commit defenders – Victor Lindelöf and Harry Maguire particularly did so – by releasing possession at the last possible moment to delay potential recovery runs. If they succeeded in also committing a further opponent and then feeding the teammate who had just been left free, further teammates were also being freed up by their opponents' need to move to the player receiving the ball, encouraging United to continue playing forwards.

United also threatened in transition, and were ruthless on the counter. Their press complemented that; they played forwards early during moments of transition, often ensuring a four-on-four in the final third.

Leeds were again set up into Marcelo Bielsa's preferred 4-1-4-1 in which Patrick Bamford featured as their lone striker and Kalvin Phillips operated between defence and midfield. Their opponents, Manchester United, defended with the same 4-2-3-1 with which they attacked.

The visitors sought to build from defence, and encountered a high press. Anthony Martial was instructed to press the inside shoulder of the ball-carrying central defender to negate potential switches to his defensive partner, and to ensure that the in-possession player became easier to predict. When Martial was applying that press, Bruno Fernandes would prioritise Phillips, but if Leeds succeeded in playing between their central defenders their targets would switch.

United, as did Leeds, attempted to force their opponents wide and then to force regains. When possession was played out from defence Fernandes often also often doubled up with Fred or Scott McTominay on the ballside midfielder to apply a press on that midfielder's blindside and therefore to steal possession as it was played inside.

Leeds favoured building towards the right, where Jack Harrison and Mateusz Klich combined to create spaces through which to penetrate. Klich made forward runs from infield to either draw an opponent away from Harrison and free his teammate up to cross, or to receive the next pass and then deliver the cross instead. Crosses were attempted from both advanced and deeper territory, and most commonly directed towards Bamford.


Pascal Struijk replaced Phillips for the second half, and provided increased defensive stability. With Stuart Dallas moved to midfield and replaced at left-back by Jamie Shackleton, who came on for Klich, there also existed an increased emphasis on Dallas and Rodrigo to build possession.

Longer passes were too regularly ineffective against United's defence; their ability to defend also meant that the success of their crosses was mixed. Off-the-ball forward runs regardless offered potential, but risked leaving spaces behind them for United to transition into, and United ultimately regularly punished Leeds' ambition.