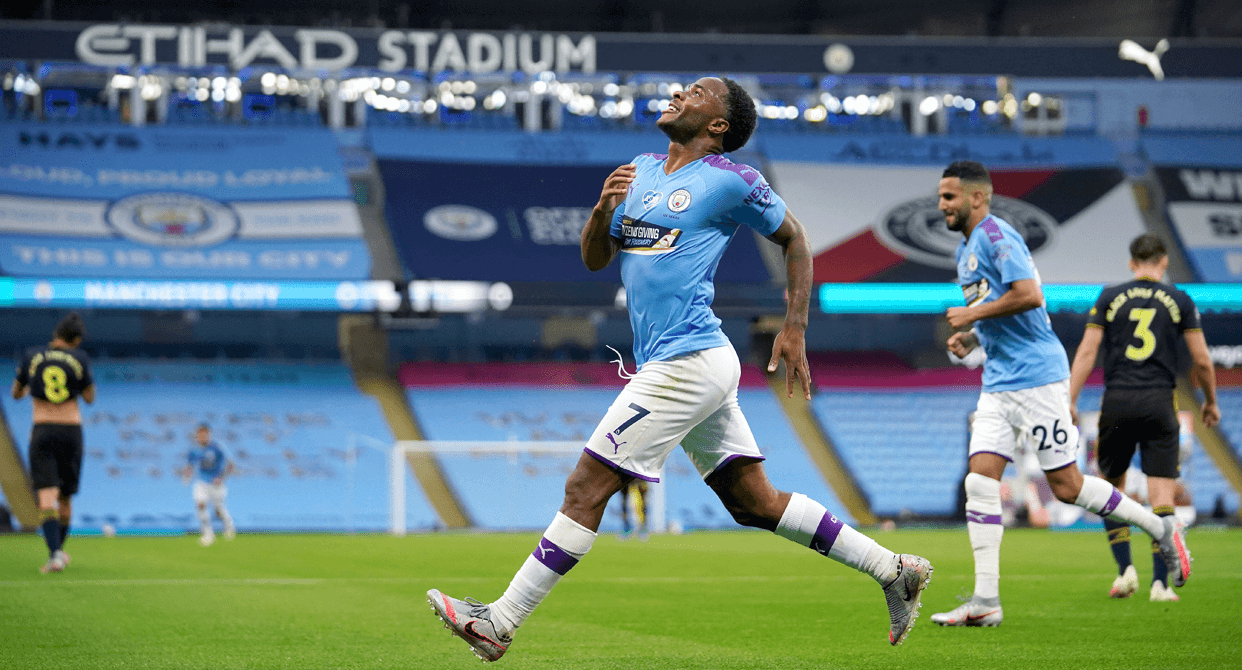 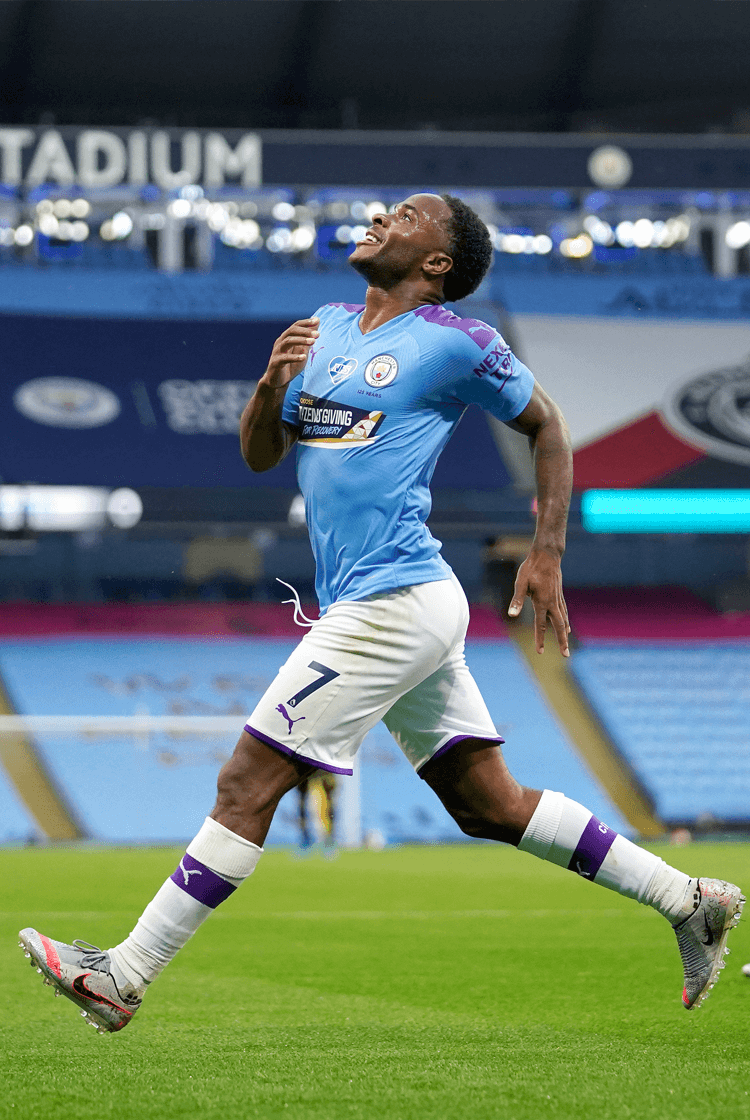 Manchester City marked the return of the Premier League, following the mid-season halt enforced by the coronavirus pandemic, by recording a convincing victory against Arsenal, who were reduced to 10 men when substitute David Luiz was sent off after an error-strewn performance. On Mikel Arteta's return to the club he left to accept his first managerial position, his team struggled from the point of David Luiz's introduction as a replacement for the injured Pablo Marí. When the Brazilian failed to clear, Raheem Sterling gave City the lead on the stroke of half-time; he was then sent off for a pull on Riyad Mahrez when he conceded the penalty from which Kevin De Bruyne scored City's second goal. At a numerical disadvantage, it was perhaps a surprise that Arsenal conceded only once more, this time to a finish from Phil Foden. "Everything went wrong from the first minute," Arteta said. "Every possible accident that could have happened. (David Luiz) is someone that is very honest and straightforward. My opinion on David Luiz hasn't changed. It won't change because he had a difficult performance." 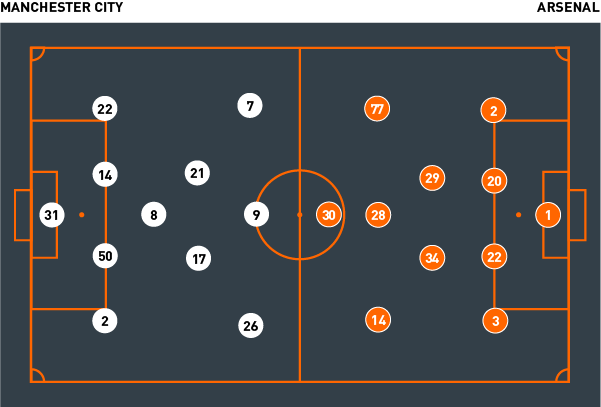 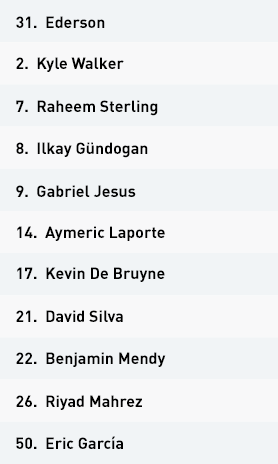 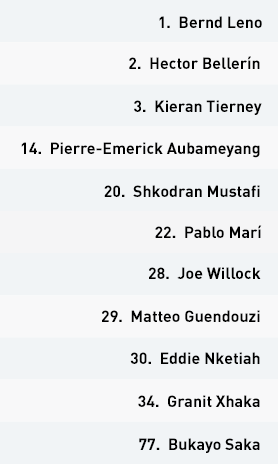 Pep Guardiola set Manchester City up in a 4-3-3 formation when in possession, with Kevin De Bruyne typically crucial from his position on the right side of their midfield three. His former assistant at City and Arsenal manager Mikel Arteta favoured a 4-5-1 mid-block when out of possession, to attempt to nullify his previous employers.

The early stages featured neither team giving much away – both were cautiously acclimatising to the return of competitive football after a three-month break. Arsenal attempted to press City high up the pitch; their lone striker Eddie Nketiah pressured one central defender while trying to prevent a switch of play to the other, with the aim of making City’s play more predictable. Matteo Guendouzi often moved forward to close down Ilkay Gündogan at the base of City’s midfield, and Joe Willock and Dani Ceballos, who replaced Granit Xhaka early on, prioritised David Silva and De Bruyne. Wide forwards Pierre-Emerick Aubameyang and Bukayo Saka worked to unsettle City’s full-backs but occasionally strayed towards a central defender, inviting City to play around them and out of trouble.

As the first half progressed it became clear that Willock and Ceballos had been tasked with man-marking Silva and De Bruyne, by detaching from their midfield unit to ensure that City’s dangerous playmakers couldn’t receive passes free from pressure. In response, De Bruyne roamed in search of space more than he usually would, and regularly withdrew into a false full-back role, from where he combined with Kyle Walker and Riyad Mahrez.

This asked questions of Ceballos. Was he willing to follow De Bruyne deep into City's half, and to potentially open up the space for Mahrez to move off the wing and receive a pass? His other option was to allow De Bruyne to withdraw and receive a pass and face forwards – he would maintain Arsenal's desired compactness, but essentially give the finest midfielder in the league time and space to pick and execute his passes. Ceballos largely favoured the latter option, ultimately allowing De Bruyne to play his trademark whipped passes in behind Arsenal's defence. One such pass was horrifically misjudged by David Luiz, who had replaced the injured Pablo Marí, to gift City their opening goal.


The area between David Luiz and Kieran Tierney was key for City; they consistently sought to exploit that space through both penetrative passes and runs. The hosts used diagonal runs in this part of the pitch and created good quality chances in the first half as a consequence, but Bernd Leno responded with a string of fine saves. City also used vertical passes to Gündogan and Gabriel Jesus, who frequently withdrew into midfield. These passes drew Arsenal’s midfield closer together, so City quickly played possession to De Bruyne or Silva in the half spaces.

After the second goal and David Luiz’s red card, the tempo of City’s play dropped significantly. Arsenal responded by moving to a 4-4-1 when out of possession; Saka moved to left-back and Tierney joined Shkodran Mustafi in central defence. The introductions of Alexandre Lacazette, Ainsley Maitland-Niles and Reiss Nelson injected more energy into a deflated team; that 4-4-1 also occasionally became a 4-2-3 when they wanted to press more aggressively. This yielded some positive outcomes when that press began around the halfway line, but when Arsenal pressed City too near to their goal their hosts found it fairly straightforward to play out, and doing so led to their third goal.

Phil Foden scored that goal, having come off the bench with Bernardo Silva to join Sterling and Jesus, later replaced by Sergio Agüero, in a four-on-four against Arsenal's defence. Those four players used vertical rotations – one or two of the four withdrew deeper and drew their direct opponent out of position while the others made runs in behind. City created a flurry of late chances and might well have won the game by a wider margin.

Arsenal were organised by their manager Mikel Arteta into a 4-2-3-1 formation, led by a lone striker in Eddie Nketiah, while they had possession. Their hosts Manchester City defended with a 4-3-3; against that, Arsenal sought to build from defence and to play through midfield, but City’s defensive structure made it very difficult for them to build momentum or to progress possession.

Riyad Mahrez and Raheem Sterling were instructed to press the outside shoulders of Arsenal’s central defenders, essentially guarding against balls to their full backs while doing so. Gabriel Jesus prioritised Matteo Guendouzi and then advanced to press Bernd Leno, contributing to Ilkay Gündogan instead moving to Guendouzi. City’s midfielders were crucial in nullifying Arsenal’s potential threats; by Kevin De Bruyne and David Silva occupying both the opposing midfielder and full-back, Kyle Walker and Benjamin Mendy could remain alongside central defenders Aymeric Laporte and Eric García.

The athleticism of Pierre-Emerick Aubameyang, Bukayo Saka, Joe Willock and Nketiah meant that Mendy or Walker committing to a higher press would risk a direct pass over them towards Arsenal’s attackers. City’s compact structure centrally and further forwards meant that Arsenal were forced into playing these longer balls, but City defence's was comfortable against them because of their positioning.


Despite the opening exchanges remaining balanced, Arsenal had difficulty in creating goalscoring chances. The triumvirate operating behind Nketiah all appeared individually isolated, and perhaps attempted to cover too much width, making it particularly difficult for them to combine and progress beyond City's defence. Arteta's team was also too slow and hesitant in possession when their attackers could have thrived on early, forward passes.

They therefore didn't manage a single shot on target, and recorded an xG total of 0.65. Beyond that possible threat in behind Arsenal only offered potential during transitions, but City's positioning was intelligent against that. Walker and Mendy occupied deeper positions or moved inside to ensure that City had the pace required to defend against their visitors' attempts to attack on the counter. City also had the dynamism of Sterling, Gündogan and De Bruyne to assist the moment possession was lost, which also helped to guard against threats in transition.